The madman was apparently a well-trained athlete, marksman and possibly spy. He was an excellent actor with strong presence, and good at disguise and costuming.

One of his best assets was his sheer savagery and his insanity-borne strength. These were surprising even for Cage.

This madman described his life, but his account was weird and full of holes. So it probably was incorrect, if not outright fantasy. And he probably was playing a character when he did so.

In this account, he was a former OSS agent. During Victory Day at the end of WWII, he supposedly absconded with the USA’s third atomic bomb, since security was exceptionally relaxed. But over the decades he considered that the world was becoming more and more decadent and warlike. By 1973, he had decided to destroy it.

Ghost of the past, present and future

When he first appeared, he was pretending to be an eccentric fellow pretending to be from Victorian times. This character was called “Marley, a dealer in chains”. He was beating up a paper boy with his cane in front of the Temple/Bernstein free street clinic.

Cage intervened, punching the cane into tender and driving “Marley” away. As a result the madman became fixated on Cage, and eager to test him further.

Cage and his friend Claire Temple next encountered a legless Việt Nam war veteran on the street. Not recognising the disguised madman, Cage gave him some coins. But the beggar then pretended to flip out, and shot Cage with a submachinegun. Cage protected Temple and angrily shredded the gun with his bare hands. But he didn’t assault the “crippled vet”, who retreated.

When Temple and Cage left the bar, the madman ambushed them again. This time he wielded laser weaponry and pretended to be a police militiaman from a 1984 -like dystopic future. A laser probably could hurt Cage, but Cage nevertheless body-slammed the “militiaman” to protect Temple.

Since the newest act was too far-out, Cage realized that it was the same man as “Marley” and the insane vet. Despite the madman’s incredible strength, Luke took him down.

However, the madman overcame the police once Cage had his back turned, and fled. Cage gave chase, but the madman donned a Santa Klaus office. Assuming he was a mall Santa, Cage approached to ask if he had seen the fugitive. The madman knocked him out by surprise.

Such tests were meant to see if New York City was worthy of not being destroyed. The madman had an atomic bomb, and wanted to nuke Manhattan and trigger WWIII. Cage’s heroism nearly convinced him not to do it, but he changed his mind and decided to go along with the original plan.

However, he was distracted by a burglar who was trying to enter his house from the chimney. This gave Cage the few seconds he needed to tackle him and punch him out.

The main illustrations depicts the last costume he wore as he got ready to detonate the atom bomb.

He’s an intense, raving weirdo. He loves to dress in weird outfits and act as outrageous, loud characters. He seemed to ad-lib most of his stuff.

After Cage recognized him, the madman spoke in a weird mix of the personas of his three previous characters. It’s thus not impossible that he presents a case of comic-book multiple personality disorder.

His whole “rationale” was that he preferred an absurdly romanticised past, and hated the present. Hmmm.

(Past) “You are strong, you blackguard — but a member of Her Majesty’s Fifth Northumberland Fusiliers  knows full well how to attack adversity !”

(Future) “Mugging ? No, companion… this is only a security check. Let me see your identification card and authorization to be on the street.”

Equipment:
The madman could apparently easily procure equipment, including comic-book-advanced gear. During the Christmas night he had, in his various identities :

The equipment pool varies by identity :
Stout cane Strength-based blunt Damage 2 ● 2 points
Submachinegun Ranged ballistic Multiattack Damage 4 ● 12 points
Wrist laser Ranged laser Damage 4 ● 8 points (also had a laser pistol, but it wasn’t fired)
He also had… something disguised as a brass bell that knocked Cage out with a sucker blow to the head. I have no idea of what it could be or how he did it. A shaped sonic charge, maybe ? 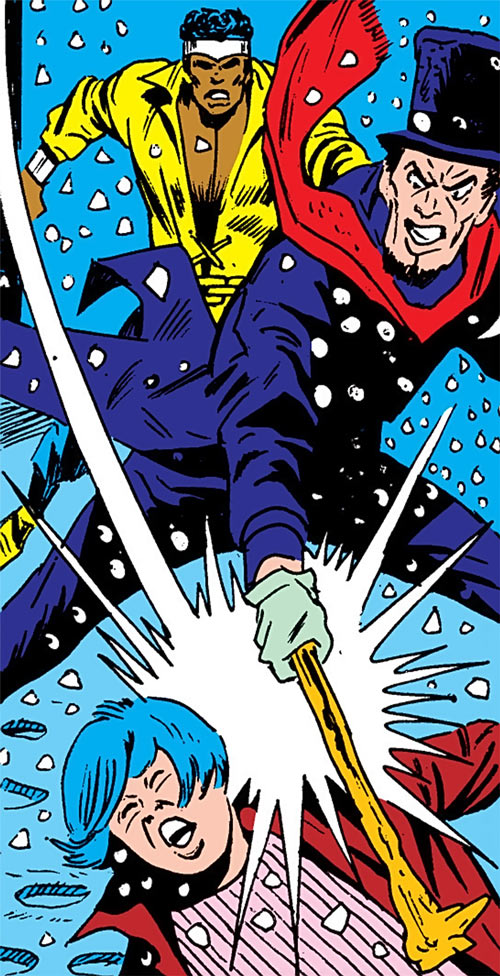 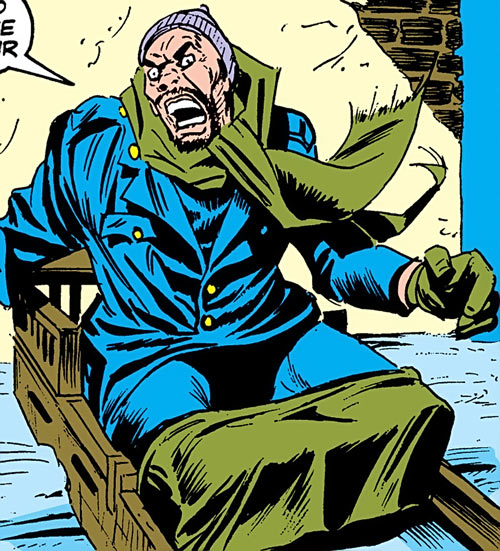 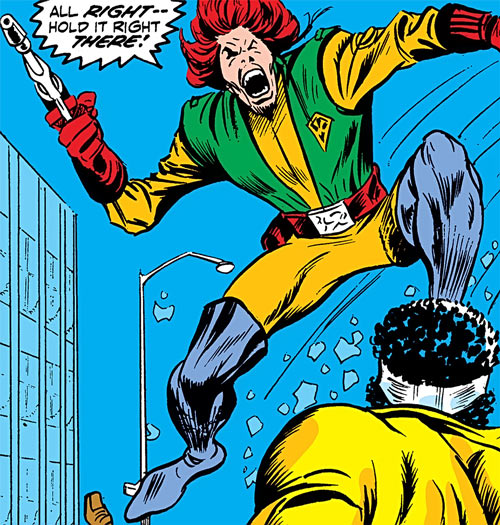