Chroma is a being that seems more or less made of energy (in DC Heroes RPG terms, Self Link). But they can create medically-accurate bodies for themselves.

Those bodies are usually identical to those of the planet’s dominant sapients . But concepts alien to Chroma (such as sex or gender) are likely to be statistically averaged. Many men will thus guess that Chroma is male, and many women that Chroma’s female.

(This may have been inspired by some glam rock, then new wave singers experimenting with androgynous looks — Ed.).

When in a body, Chroma operates like a physical being. But they can choose to leave their body at any point. Usually they leave such a dead shell behind before leaving the planet.

Being a potent energy creature, Chroma can generate tremendous electrical phenomenon and disruptions (EMP). These are normally accompanied with a spectacular, psychedelic display of colours and transparent shapes, with precise images when desired (Illusion).

These colours do more than looking impressive, however. Watching them can trigger powerful emotional reactions in most living beings. Howbeit, how they interpret the images strongly depends on their culture, psycho-sociological makeup, and perhaps nervous systems and visual organs. Chroma likes to experiment with this.

Although the colours do most of the work, Chroma prefers to accompany them by singing. Their singing is incredible and unmatched by mortals. Furthermore, Chroma can produce their own, powerful music that is not so much heard as felt (although there is definitely sound one can record and/or broadcast).

Chroma seems able to instantly master any language, being fluent enough with them to compose superb poetry and lyrics.

Chroma’s sole recorded appearance on Earth was during an L.A. outdoors concert of the Stone Dead, a popular 1980s rock group. The LAPD had, chiefly as a PR move, deputised super-hero group Infinity, Inc. to help with with the security at the concert.

Appearing in the sky, Chroma hogged the scene after chasing away the Stone Dead. The alien gave their own performance to the crowd, singing about mortality and the inevitable death of Earth. Although Chroma’s performance was seemingly intended to provoke deep, suicidal despair, it was instead perceived by the audience as an incredibly moving performance.

Instead of letting themselves die, people became huge fans of Chroma. The performance was broadcast over and over and over again on TV throughout most of the planet, turning billions into fans.

Now this is art !

During the performance, Infinity, Inc. attempted to intervene since the electrical disruption was endangering the area. Chroma intensified his onslaught of colours, neutralising Infinity, Inc. and making them into yet more fans. Chroma’s colours, however, turned out to have no effect on Obsidian. He very publicly knocked Chroma out to put an end to the disturbance.

The planet’s new darling was rushed to a nearby hospital. Obsidian became reviled by most, and tensions appeared between him and his team, which was increasingly siding with Chroma.

As the song kept being played over and over again on the TV, viewers started digging into it. Many became convinced that Chroma was some kind of messiah heralding the end of life on Earth. These people started trying to get access to the artist for answers about destiny.

Continuing to use Broadcast Empath assaults, Chroma made even the most determined Infinitors, doctors and policemen resolute to protect the alien. Stepping out of the hospital, they started answering questions from a throng of fans. Obsidian attempted to intervene and in so doing clashed with the whole of Infinity, Inc.

His team mates managed to stop him. This proved fortunate since Chroma intended to have Obsidian appear to slay them, turning themselves into a martyr. Since the plan was not entirely working out, Chroma dropped it. They let their body turn to dust and zipped away.

The impact of Chroma’s performance immediately started fading away.

Chroma comes across as an arrogant rock star with no interest at all in their fans, except as a medium of sort for their art. Their performance are multimedia. Singing, music, light show, “video”, complex and fluid colour arrangements and the somewhat unpredictable reactions of the crowds. 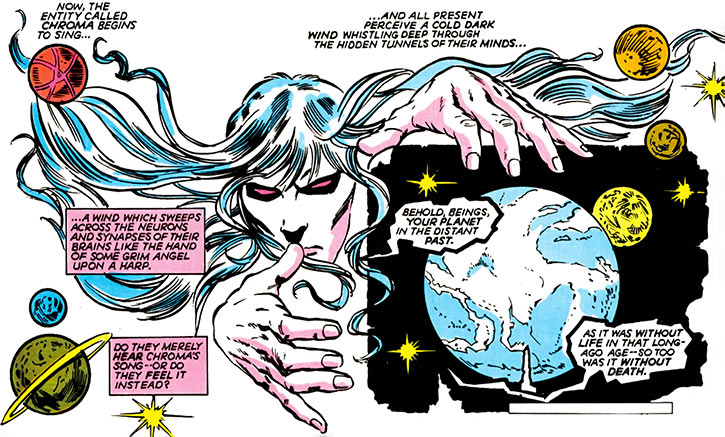 A performance artist, Chroma is angered and frustrated when one of the media in their performance does not react according to their artistic vision. This happens fairly often since most parts of the show, and especially the Broadcast Empath part, have to be interpreted by the audience. If frustrated enough, they will leave the planet.

Chroma talks huge, as if they were at least on the level of the Silver Surfer. All the abilities they demonstrated are in the writeup, but they might indeed be as cosmically powerful as they keep announcing and implying.

Chroma keeps stating they have no concern for lesser lifeforms such as humans, but insisting on this may have been part of the performance.

“Stand aside ! I would sing to the waiting multitude ! Chroma’s song is a ballad of devastation… a medley of death and inevitable doom… your doom, Earth !”

“My reality, I fear, lies far beyond your comprehension. Rest content that I mean you no harm. Consider my song – a gift.”

“Beings — there is not enough energy in all your stellar system to pull free a strand of Chroma’s hair.”

“Pity. For, if the dark one had struck me again, I would have allowed this human form you perceive me to be — to die — just as, last night, I let myself appear to be defeated !”

“But now, my experiment on your world is done. I shall return with another song in another million of your years. Perhaps, your species will survive that long… perhaps not. It is of no importance to Chroma.” 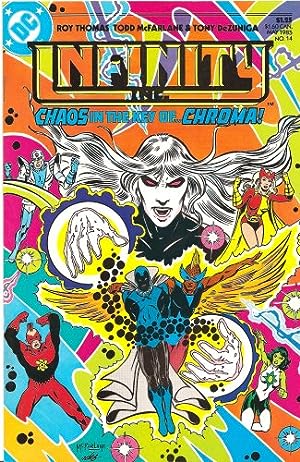 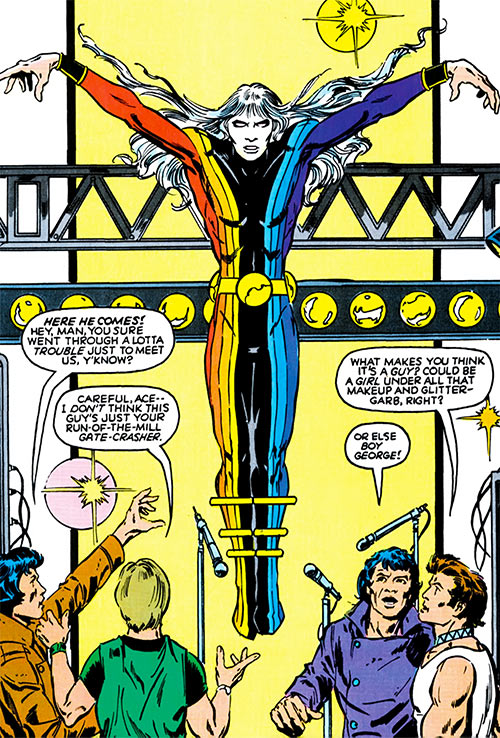 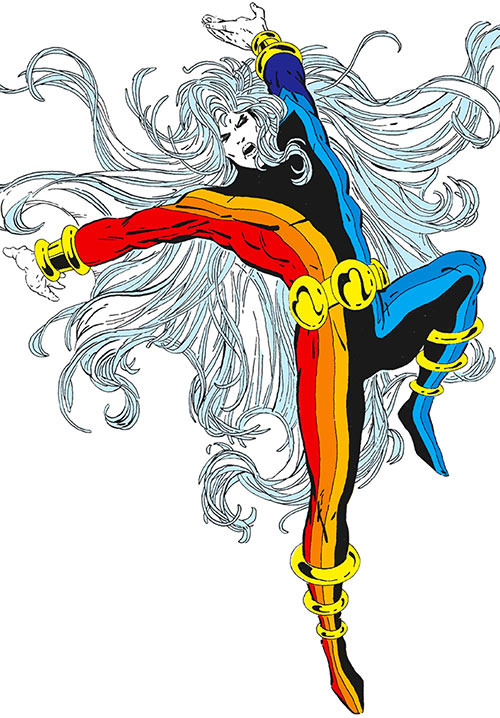