Unless you’re well acquainted with this setting, we suggest reading our XCom Project article first.

Chryssalids are an insectoid alien lifeform with amazingly tough chitin. They are very strong, fast and resilient. They can easily destroy vehicles, and conventional small arms wielded by ordinary shooters aren’t going to have much of an effect against them.

Chryssalids rush in, moving faster than any man can run, and kill everything with their powerful claws. They can leap on the top of a one-story building without breaking stride, and seem to have some sort of electricity detection sense that may resemble that of sharks.

Their nervous system is very different from that of most Earth life forms. This makes attacks against nerves (such as electric shocks) ineffectual.

This is all of this is pretty bad news. But it’s not the worst.

Chryssalids reproduce by injecting a hatchling into a freshly-killed corpse. Normally, the incubation lasts fairly long, but it can radically be accelerated. One imagines there’s a cost to this, though (perhaps the hatchling’s life expectancy is lower if birthed very quickly ? Or maybe it becomes sterile ?)

The hatchling will take over the nervous system of the host within seconds. In this state, the animated corpse possesses superhuman strength and resilience, but is shambling and has but very crude perceptions. This is in part because the hatchling is busily devouring meat, organs and energy to finish hatching. The body visibly gets ruined as they do. 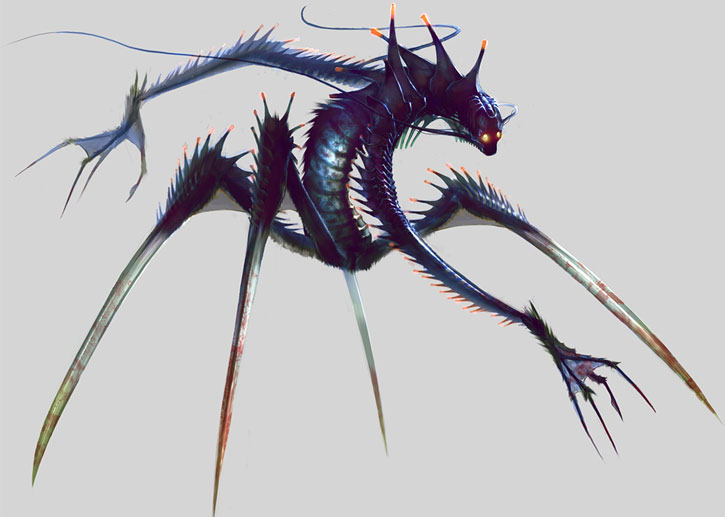 Within less than a minute, the zombie will finish falling apart and a new Chryssalid will emerge. Though smaller and less powerful than its parent, it is still very strong, fast and tough. It will be able to join the action just like an adult.

How many eggs a single Chryssalid can carry is unrevealed.

“Chryssalids” (so nicknamed for their ghastly mode of reproduction) are another slave species of the aliens. What the aliens were trying to uplift them toward is unclear (a telepathic hive mind ?), but it produced a redoubtable scourge of living weapons.

Chryssalids started appearing during the second month of the alien intrusions on Earth. Soon a terror strike was launched against a major city. Thankfully, it involved a low number of Chryssalids.

An XCom tactical team responded swiftly and with prototype laser small arms, nipping the threat before it could spread virally.

This terror strike made it clear to the XCom officers that the aliens could ravage Earth whenever they wanted. A large airdrop of Chryssalids on a densely-populated area would be nigh unstoppable. It would produce an army of deadly insectile warriors within hours. Clearly, outright invasion was not what the aliens had in mind.

In unknown circumstances, a number of Chryssalids attacked a Canadian fishing vessel. At this point the ship was returning to its port, a small fishing village in Newfoundland. All aboard were killed, and the Chryssalids swarmed over the corpses of large fishes, turning them into incubation chambers.

Crewless, the ship ran aground. The Chryssalids swarmed out, killed all locals and used all sorts of bodies in the village, from human to sharks, to incubate more Chryssalids. 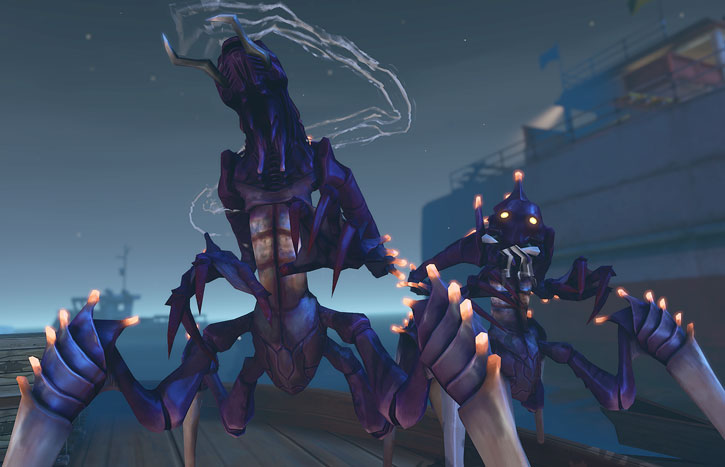 Thankfully, the XCom Project reacted extremely quickly. A commando was deployed and progressed through the village, using extreme amounts of force. It soon became obvious that the large corpses aboard the fishing vessels could hold dozens and dozens of Chryssalids, which was impossible to handle on the ground.

XCom hypersonic jet fighters were hastily equipped with powerful fire bombs and scrambled. The commando on the ground activated a transponder to give them a clear target. The XCom team got out by the skin of their teeth, and the whole village was turned into a fireball. All Chryssalids and embryos were killed by the enormous explosion and firestorm.

The Chryssalids probably have some sort of sapience . Maybe. Communication is impossible, and they cannot be captured – nearly bullet-proof berserker super-strong insect monsters who can’t be electrocuted or affected by nerve gas and always fight to the death.

They just ravage everything that lives in order to reproduce.

Like all aliens, Chryssalids emit “psychic static” – our proposed rationalisation for certain XCom gameplay conceits. See the entry for Thin Men for an extensive discussion of those, and our XCom setting article for in-universe explanations.

A Chryssalid can spend one Phase (consuming all Actions) to inject a child into a freshly-killed corpse. The corpse will remain inert for 3 Phase, then rise as a “zombie”.

Assuming a human corpse, the “zombie” will have DEX 02 STR 07 BODY 07. It will remain active for 8 Phases before turning into a Chryssalid hatchling.

Hatchlings have the same stats as adults by with one less AP in most Attributes and Powers (being a Split), which’ll go away as they grow up.

The time scale used here is noticeably slower that in the video game, since the gameplay is different in a tabletop RPG.