The Octagon is a 1980, rather dated martial arts movie starring Chuck Norris. This role is the one that comes to mind — at least for me — when it comes to old-school Chuck Norris karate action. Well, after Enter the Dragon, obvs.

In some ways, Scott James can be considered a less goofy version of the American Ninja. In fact the main two Japanese characters in both movies were played by the same actors (John Fujioka and Tadashi Yamashita).

Scott James is a martial arts expert, and has been trained by an extraordinary master. He can unfailingly sense dangers (no ninja ever get the drop on him, and he always notice the subtle signs of an ambush). He also seems to have been trained in ninja weapons and techniques, including kenjutsu.

When facing minor opponents, James will — in DC Heroes RPG terms — often spend a few Hero Points  (using the preferential rate from his Goonbane Schtick) to augment his EV by a few points. This allows him to quickly dispose of mooks, to lower the odds that they’ll get a lucky shot in.

Scott James was adopted by an Asian man (very likely Japanese). He was raised along with another youth, possibly the master’s offspring – Seikura. Scott considered Seikura to be his brother, but Seikura was a proud boy and jealous of Scott. This got so bad that the master expelled Seikura, declaring him to be Scott’s brother no longer and their mortal enemy.

Scott was involved for several years in full contact karate competitions (becoming an acclaimed champion). He also likely worked as a mercenary. The latter activities put him in contact with McCarn, an aging merc who had become an important fixer.

James eventually took a young man under his wing, AJ, and trained him to become a competitive karate contender.

By his mid-30s, James was basically retired. He kept training, but lived as an independently well-off socialite in L.A..

Meanwhile, Seikura also got involved in the mercenary scene. He eventually became the head of one of three training camps teaching advanced techniques to international terrorists. Those camps had a simple security policy — anyone telling about them would be murdered, as well as their entire family.

While attending arts events, James met with a beautiful young dancer named Nancy. When she eventually took him to her place, she was attacked by ninjas. James defeated them, but she was nonetheless killed. It soon became apparent that all of the people in Nancy’s house had been murdered as well.

Knowing that ninjas could only have been trained by the master, now dead, James realized that Seikura might have been involved.

Refusing to believe that the man he still considered to be his brother might train mass murderers, James simply let the matter drop. AJ, however, investigated. He discovered that Nancy’s brother had been a terrorist trained in the camps. The police had caught him in Paris and he talked, condemning his family to death.

It also became apparent that Nancy, not realizing the seriousness of the situation, had been using the dance troupe to smuggle money used by terrorists. Which made her death OK because this is a 1980s action movie.

Soon afterward, Scott James met another attractive woman (if you discount the pouffy 1980s hair), Justine Leighton. Justine was the heir to an European publishing empire, as her father had recently been assassinated. Soon after her dad’s murder, she started receiving death threats. These demanded drastic changes in her political editorial line.

Justine refused to comply, and started hiring mercenaries to strike back. The men threatening her were tied to the terrorist training camps, and she managed to have two of those destroyed by her mercs. The last one, Seikura’s, was another matter. Thus, Leighton foolishly tried to manipulate James using her feminine wiles (whatever that is).

This failed. Justine tried to convince him in more straightforward ways when she realized he was not easily manipulated, but he refused to hear her. Still, she was insistent enough to convince him to get recruited to join the camp as a trainee. However, James was recognised and this attempt failed.

However, during the attempt, James was spotted by a female terrorist, Aura, who was planning to defect.

Justine then met AJ after James carelessly introduced them. Apparently without realizing the likely consequences, she told him about her situations and her constant fear for her life. The reckless AJ, attracted toward Justine and wanting to prove that he wasn’t just James’ pupil, decided he would destroy the final camp by himself.

He left to find the camp. Justine rushed to James to warn him, but Seikura’s men got to her and killed her. This sealed AJ’s commitment to getting the final camp’s leader.

At that point, Aura had escaped and reached James for protection. James initially refused to help her, but soon decided that he had to catch up with AJ to prevent him from getting killed. Thus, he asked Aura to take him to the camp. Ninjas attempted to kill both Scott and Aura, but he defeated them all.

Meanwhile, men from the recruiting ring James had previously tried to infiltrate also came to kill him, but they were all killed by McCarn and his mercs.

Scott and Aura eventually found the camp (after the attractive Aura decided to start a relationship with him), but were a few hours behind AJ. As it turned out, AJ had easily been captured by ninjas. The following night, James infiltrated the camp, but he was eventually captured too.

The ninjas threw him into the elaborate structure at the center of the camp, the octagon. There, Seikura had him run a gauntlet of obstacles and ninjas, culminating in a fight with his head enforcer, Kyo, the Master of the Octagon. James eventually defeated him. Seikura killed AJ in revenge, sealing James’ resolution to kill the man who once had been his brother.

As many of the trainees in the camp rebelled, Aura destroyed the place using fuel and explosives while Scott and Seikura duelled.

When on a mission, he will wear a black Army-style pull-over, black slacks, black shoes and black leather gloves.

A quiet, charming, confident man, who spends his money lounging around in the upper crust L.A. social scene. Despite — or perhaps because of — his past, Scott is definitely not looking for trouble. He did not even investigate the killers of his new girlfriend (AJ did) until Justine told him that Seikura might be involved.

He has been accused by McCarn of being a “gloomy S.O.B.”, and usually flat-out refuses pleas for help. He’s generally contemplative and prefers to live a soft life, though he does continue to train in the martial arts.

A large part of his inertia, though, may have been his desire not to confront Seikura. Although he had been ordered long ago to consider him his mortal enemy, he could not help but to continue to think of him as his brother.

“I liked the way you incorporated the martial arts into your dance tonight.”

“That’s an insult for both of us. It makes me stupid, and you a whore.”

“I don’t sit in judgement of others.”

“I can’t help you. You have to face your own responsibilities.”

Bonuses and Limitations:
Danger sense works even whilst sleeping — he’s Chuck Norris ! — and is a Skilled Power.

Equipment:
When on a mission, will hide a throwing blade in each of his black leather gloves, over the back of his hand [BODY 04, EV 03, Can be thrown]. He will eventually grab a sword from a fallen ninja – there’s always one. 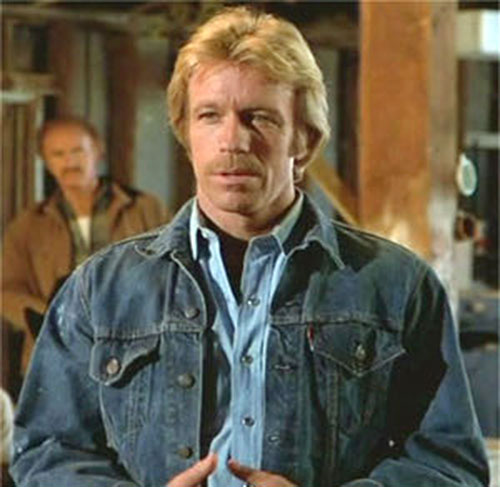 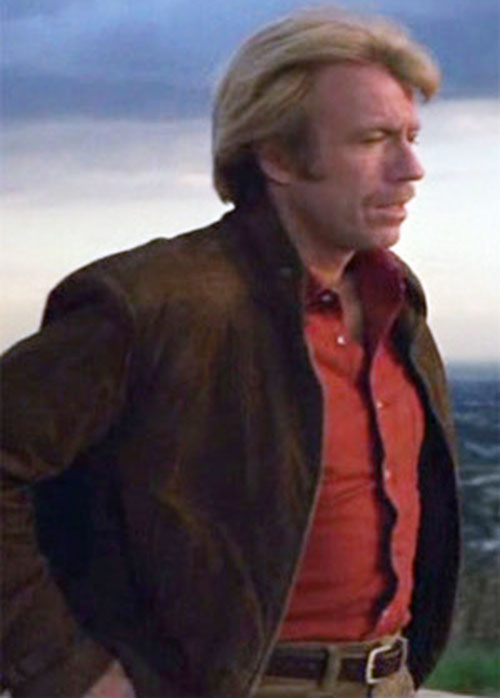 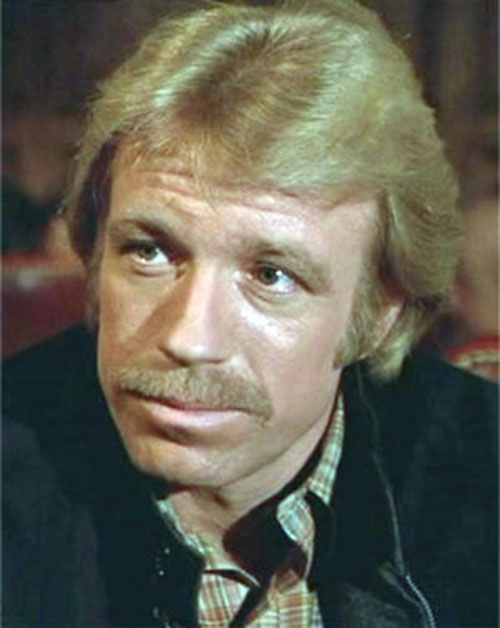 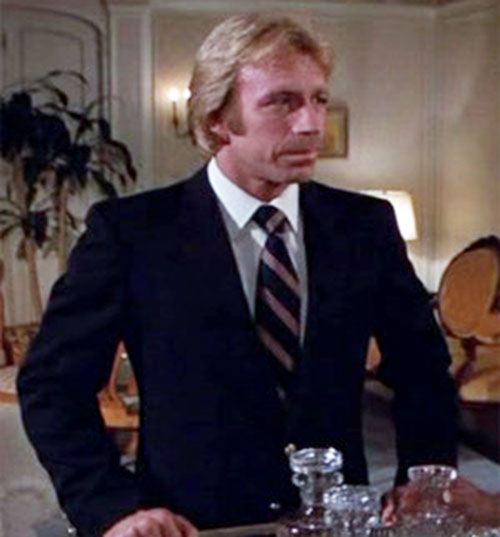 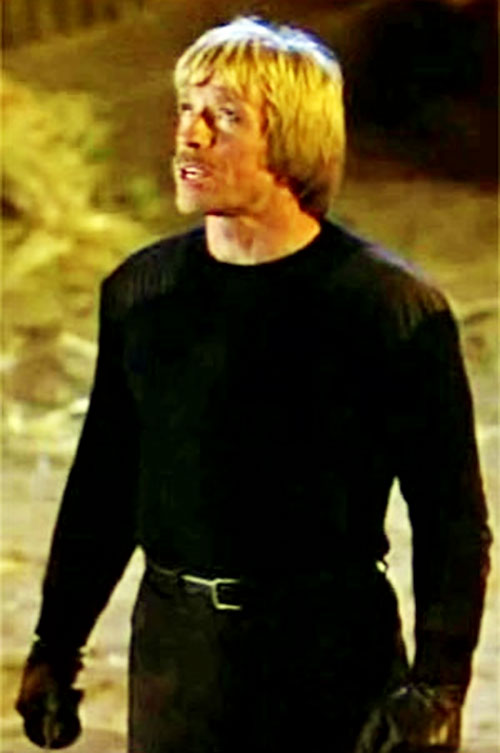 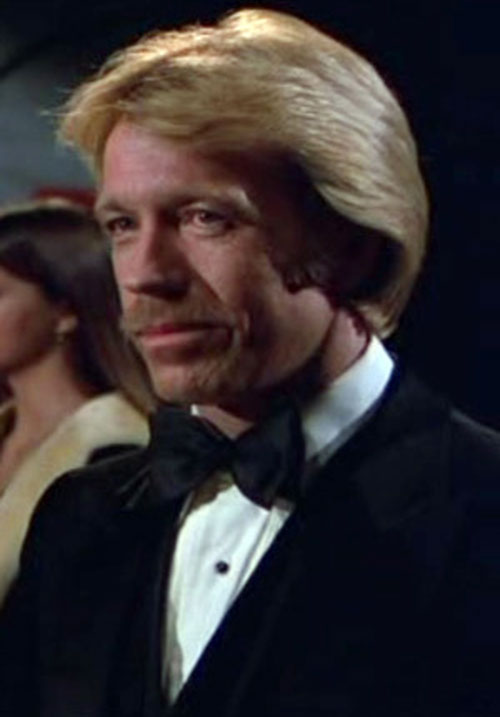