El Chupacabra has the ability to transform his fingertips into very sharp and durable clawed appendages.

The exact level of durability of his “claws” is unknown. But they are capable of rending flesh and bone with little to no effort from Chupacabra.

He can track his prey for miles with little to nothing to go on.

He is also capable of making leaps of deductive reasoning if sufficient evidence is at hand.

He is also a skilled prowler. He is able to creep from location to location with a level of stealth that is usually only common with cat-burglars and thieves.

Francisco Vasquez (aka El Chupacabra) had been one of Mexico’s premier superheroes for years when the second incarnation Guardians of the Globe decided to expand its roster.

His past involvement in saving the world, alongside Brit and the Global Defense Agency, made his position on the team a foregone conclusion. Unfortunately, when the Guardians came to recruit him, they found that he had fallen onto hard times.

Somewhere along the line, Francisco had cheated on his wife and upon discovering the affair she ended their relationship. Dejected and hurting, Francisco turned to the bottle and found himself frequenting local bars when the Guardians came calling.

Despite his better judgement, Cecil trusted that Francisco would rise above his troubles and become the hero that he once was. He asked him to join the Guardians. With little to nothing left good in his life, Francisco agreed.

Francisco’s first few missions as a Guardian of the Globe were disastrous. Despite his best intentions, he arrived drunk and disoriented. Thus, he was little to no value to his teammates.

Worse, in at least one instance he nearly got some of his teammates killed. It was during this time that Brit and Chupacabra had their first physical encounter. It was only Cecil’s reminder of Francisco’s past glories that make Brit allow him to remain on the team.

This proved to be unfortunate for their ally Cast Iron. He was fatally wounded while protecting Chupacabra (who was too drunk to protect himself) during a particularly violent battle with the Order.

A few days later, Francisco attended Cast Iron’s funeral. There, he was viciously attacked by Brit whose rage had boiled over at Francisco’s presence. Brit beat Francisco into near unconsciousness and kicked him off the Guardians’ team.

These events proved to be a catalyst of change for Francisco. He returned to his home in Mexico and began the long process of drying out. He quit drinking cold turkey, and overtime regained a measure of control over his life once more.

During this time, he was approached by several members of the local community that were looking for a missing girl. Despite his reluctance to don his costume again, Francisco re-assumed the identity of El Chupacabra and searched for the little girl.

He found her remains later that night, and mistakenly assumed that the hero named Wolf-man was the culprit. The two battled briefly but quickly realized that the true villain was a body-controlling alien spider from another dimension.

With the help of the Guardians’ members Monster Girl, Japandroid and Outrun, Francisco helped defeat the alien and gave the girl’s family some closure.

Francisco’s actions that night put him back in good standing with the Guardians. He was accepted back into his role as a member of the team. He participated in a few more adventures with them before he built up enough courage to visit Cast Iron’s family and admit his part in their son’s death. 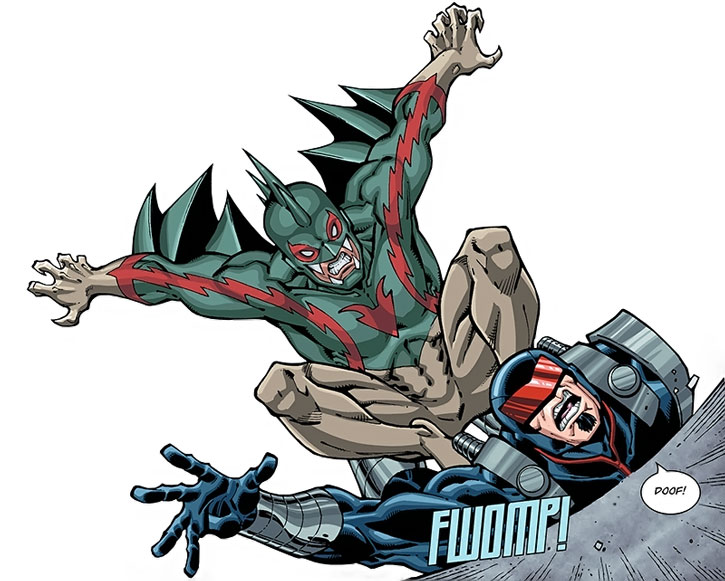 He journeyed to Serbia where he found Cast Iron’s family, the Stojakovics. These were actually a crime cartel made up entirely of members that possessed the same superhuman ability to transform their flesh into iron that the fallen hero did. His arrival caused much consternation among the criminals who immediately decided to kill him.

Chupacabra, utilizing all of his wits and skill, managed to defeat the entire family and take them into custody. He did so by destroying a dam that was built against their land. Then Vasquez rendered them unconscious as they reverted back into their flesh and blood bodies in order to surface from the deluge of water.

With the first leg of his apology tour completed, Chupacabra continued his world wide journey to make amends for his past sins.

Francisco is a handsome, slender Hispanic man with light brown eyes and dark black hair. His hair is styled in a unusual mullet; his hair is shoulder length in the back but styled into a relative short peak in the front.

Francisco is obviously fit, extremely so, but doesn’t display the same level of musculature that other members of the Guardians of the Globe. His physique more closely resembles that of an elite gymnast or swimmer.

His Chupacabra costume is a garish number. It is a body suit that covers him from head to foot but is segmented into two distinct sections. The top half is a grayish green color than has spiky fin-like protrusion extending from the backs of his arms, as well as a spiky spine that runs from the head of the costume and down the middle of its back.

Red jagged lightning bolt designs run down the middle of each of his arms and across the chest of the costume. A stylized red triangle with what can only be presumed to be horns sit predominantly in the center of the costumes chest.

Finally, the costumes mask is a full face cowl, leaving only his mouth exposed. It too is green, with red patterns around the opaque white eye holes that he looks through. His exposed mouth is framed by four artificial fangs as well.

When Chupacabra utilizes his claws, his fingertips elongate into long and sharp talons.

Initially, Chupacabra was a reluctant hero. He wallowed in self loathing and doubt. He was completely ineffectual in combat, and always drunk. No matter what scene he appeared in, he was either complaining or apologizing for his actions. The only time he showed any form of fire was when he spoke about his ex-wife.

Cast Iron’s death truly galvanized Chupacabra, and forced him to face down his weaknesses. He has since made a startling return to his former self, and appears to be every bit of the professional he was before he first appeared in the Guardians of the Globe.

His confidence had returned, but he retained an edge of humility. Chupacabra is clearly a spiritual man as he makes his residence in a monastery when not actively fighting crime.

Chupacabra is deeply committed to fighting his alcoholism and making amends for his mistakes. The experience has left him humbled but no longer broken.

“It would overrun the planet in days. We end it here and now.”

“He doesn’t have much experience in dealing with the repercussions of actions taken while we… aren’t quite ourselves.”

“Forget it amiga. I can’t ask for forgiveness if I’m not will to give it.”

(While capturing escaping prisoners from the penitentiary)
Chupacabra: “The dragon, I admit, it is too much for heroes like us…”
Code Blue: “But two-bit escapess like yourself…”
Chupacabra: “You do wonders for our self-esteem !”

“I am an alcoholic.”

“Milos gave his life defending me, but — but he wouldn’t have had to if I had been able to defend myself… if I had been sober. I came here to apologize for that.”

(Standing before a damn, surrounded by metal men) “I admit, it does look pretty hopeless. You’re all bulletproof. My claws can’t so much as scratch your iron hides. Even the weakest among you could splatter me against the wall of that dam like I was a mouse. But before you metal bastards rip me limb from limb, answer me one question. Do you float ?” (blows up the dam)

(After singlehandedly capturing the Stjakovic cartel) “The police may not come to Sikole, Mr. Stojakovic… But the Guardians of the Globe do.”

Bonuses and Limitations:
Ultra-Vision has the Light Amplification Only (-5BC) limitation. 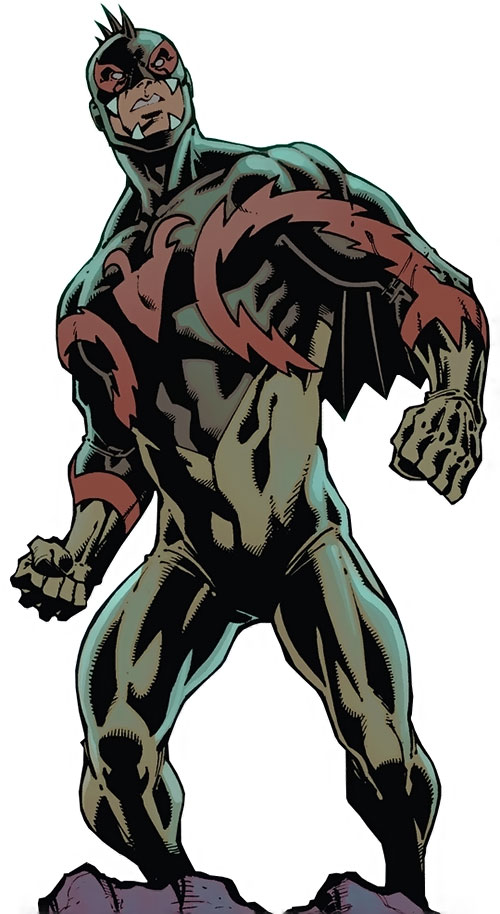 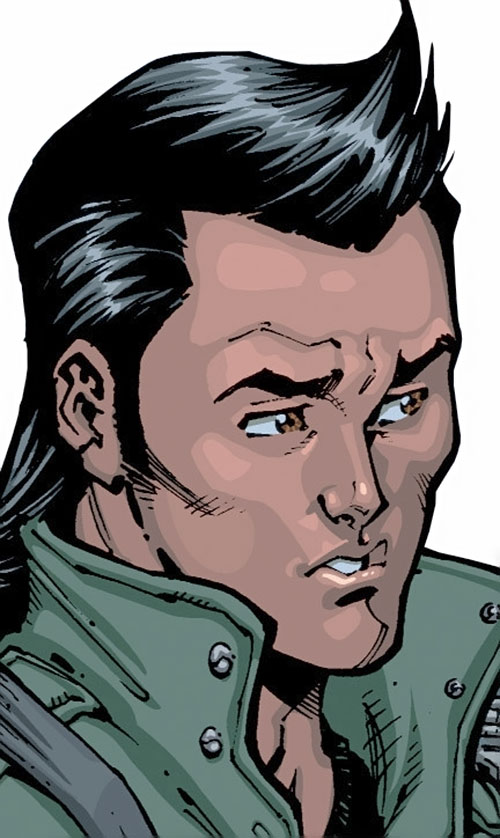 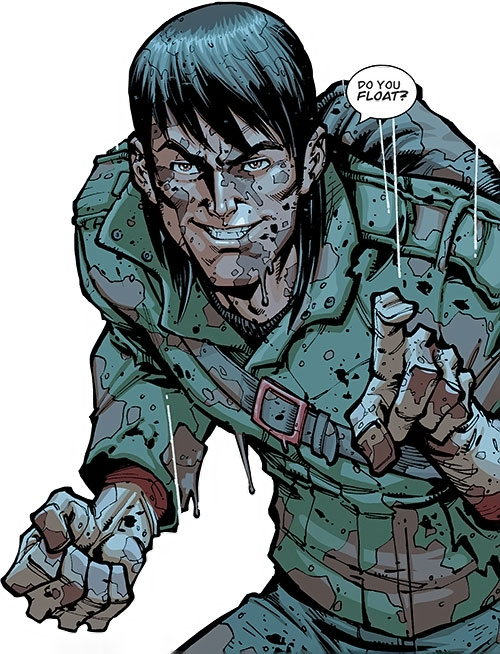 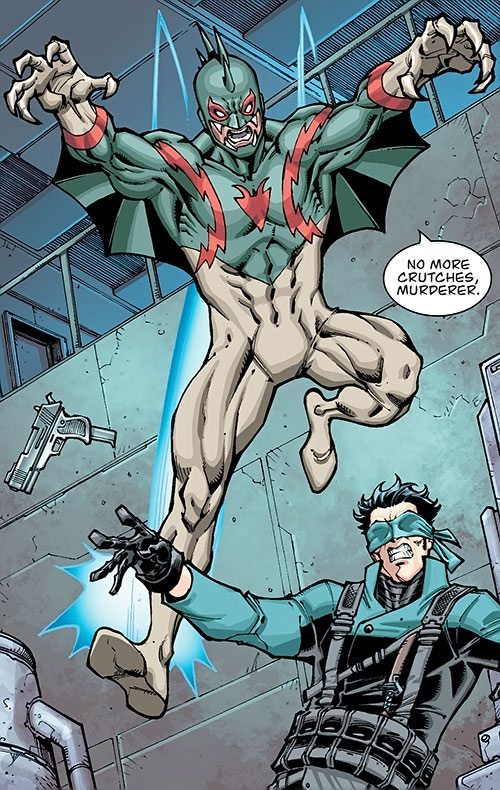