A highly capable spy with centuries of experience, Cinderella is skilled at deception and lying. For instance, her public persona being a false front to hide her true activities.

She is also a highly skilled combatant, efficient with guns – and taking them from her opponents. Furthermore, she has been trained in fencing by Bluebeard.

Like all Fables, she is extremely long-lived, and is difficult to kill, allegedly based on the popularity of their tales.

Once upon a time a young girl, badly mistreated by her step-sisters, was aided by a fairy. She was swept off her feet by the handsome Prince Charming. They married and lived happily ever after. Until his philandering nature causes discord, and the Adversary’s forces sent them fleeing for sanctuary.

Cinderella and Charming were on the last boat out of the Homelands. They reached the mundane world as the portals were sealed behind them. Joining the fable community of Fabletown, Cinderella soon divorced Charming. She eventually used the last of her fortune to open a shoe shop, the Glass Slipper.

Cinderella was secretly recruited by Bigby as a spy for Fabletown, her role known only to him and a few select others. One of those was Frau Totenkinder, who provided magical support for her activities. While Cindy initially had a good relationship with the witch, it soured as payments came due for her services. Cinderella had learned the truth about how she maintained her power.

Cinderella travelled the world for Bigby. She eventually fell into the cover role of a flighty businesswoman whose shop barely stayed open as she frittered its profits.

You Only Live Forever

Cinderella spent centuries as a spy, becoming the most experienced – and secret – in the world. Most missions focused on the safety of Fabletown – such as seducing the discredited Ichabod Crane into thinking he was defecting to the Empire.

But Bigby also saw Fabletown’s dependence on the greater world meaning they needed to stay aware of it. As a consequence, Cinderella performed missions behind enemy lines in the second World War, and during the Cold War. 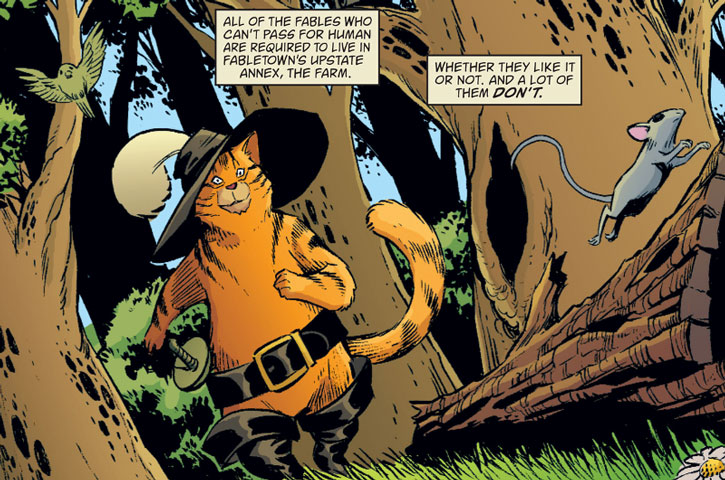 The Puss in Boots.

In recent times she also began investigating rumours of a Shadow Fabletown among eastern fables. She discovered a loose amalgamation of smaller communities, which were none too friendly to Fabletown. However, she was discovered snooping by their hired gun, Dorothy Gale, aka Silverslipper.

Cinderella had numerous missions to learn about the Shadow Fabletown over the years, frequently coming up against Dorothy when she did. Gale developed a particular hatred of Cindy, and Cindy saw her as a dangerous loose cannon. Their enmity appeared to end in Switzerland in ‘86, when Cindy kicked Dorothy off a snowy mountain to her apparent death.

From Fabletown with Love

When Beast took over as sheriff, and preparations began for war, Cinderella’s role become slightly more known. Prince Charming, now mayor, sent her as diplomatic envoy to the Cloud Kingdom. There she forged an alliance between the giants and Fabletown – despite her dislike of politics. 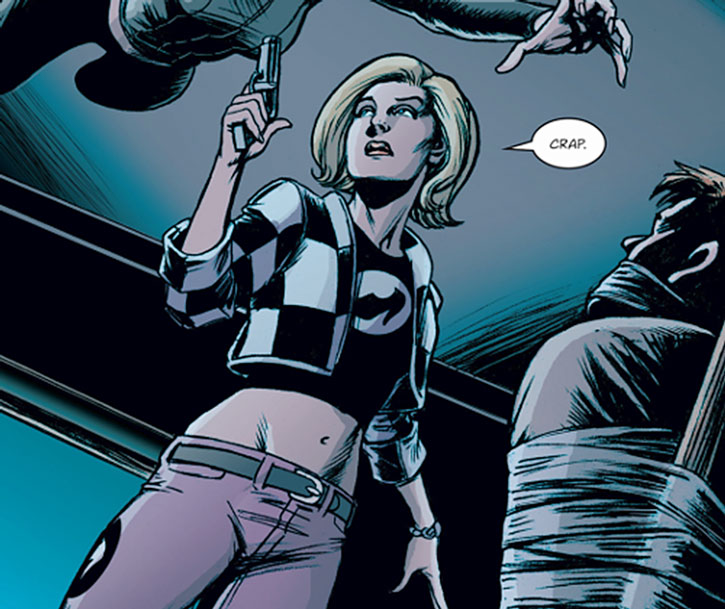 She was dispatched to South America when Fabletown received a message from Pinocchio. He had fled Geppetto with knowledge of gateways to the mundy world Fabletown was unfamiliar with. Dealing with some unscrupulous contact in the region, and empire thugs led by Inquisitor General Hansel, Cinderella got Pinocchio back safely to Fabletown.

The war against the adversary didn’t last long enough for Cindy to have much to do. But as soon as it was over she was back in service investigating a black market trade between the mundy world and the homelands. Since magic being traded to mundys risked attention Fabletown didn’t want, Cindy was tasked with stopping it.

The Arabian fables had also heard of it, and Cindy reluctantly teamed up with Aladdin. They tracked the source back to the fable land of Ultima Thule, where Cindy learned her fairy godmother was responsible.

The fairy godmother’s powers ran out at midnight, but Ultima Thule’s sun rose and set only once a year. Thus, she she’d taken power and traded magic for mundy guns that would enable her to retain power and enforce happiness on the land.

Cindy’s asset, the mouse Hickory, sped up local time so it reached midnight. That neutralised the fairy’s power before she was prepared. Cindy easily dealt with her, handing her over to the locals for justice.

Then, Mr. Kadabra of the Thirteenth Floor was found murdered with a sliver slipper brooch left nearby. Thus, Cinderella knew Dorothy Gale was still alive and after her. When she was approached by Shadow Fabletown member, Ivan Durak, claiming Dorothy’d been hired to kill him, Cinderella was sure he was actually working for Dorothy. She let him accompany her anyway, fully intending to face Gale. 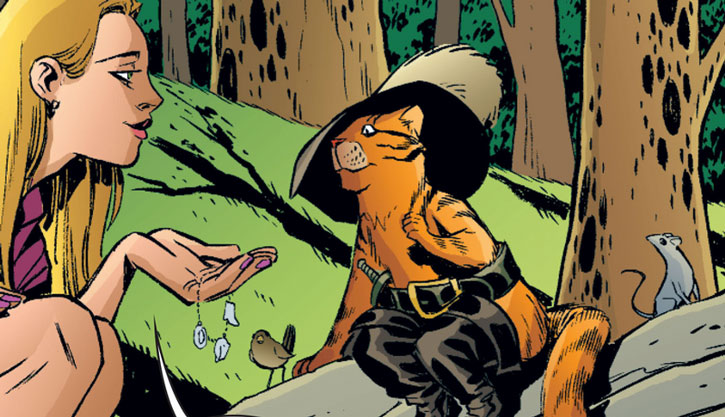 Cinderella and her Farm assets.

They followed a trail of Shadow Fabletown members, some killed by Gale’s agents. Inevitably Cindy and Ivan were captured by Dorothy’s agents and taken to Oz in a airship. They fought free of their captors and landed the airship above the imperial road leading through the Deadly Desert – contact with whose sand was fatal.

Cinderella woke the next morning to find herself bound, and learned Ivan was long dead. Dorothy’s recovered magic slippers allowed her to impersonate him and capture Cinderella. Cindy goaded Dorothy into releasing her for a rematch. The spy reasoned that, if that wasn’t her intent she’d have killed her in her sleep.

While Dorothy took their enmity seriously, Cinderella was a professional. She ran to the airship and flew away. Dorothy’s slippers let her catch up, and they fought. Realising Dorothy had lost the shoes before because they were too big for her, Cinderella pulled them off of her. She then shoved Dorothy out to fall to the (presumably literally) Deadly Desert.

Fairest in all the Land

Less than comfortable in the public role she was forced into to investigate the murder, Cindy worked through it. Not without having to let other murders occur, though. And having to choose which half of the victims to bring back to life didn’t sit well with her, no matter how sure she was of her reasons.

Cinderella’s public persona has always been: 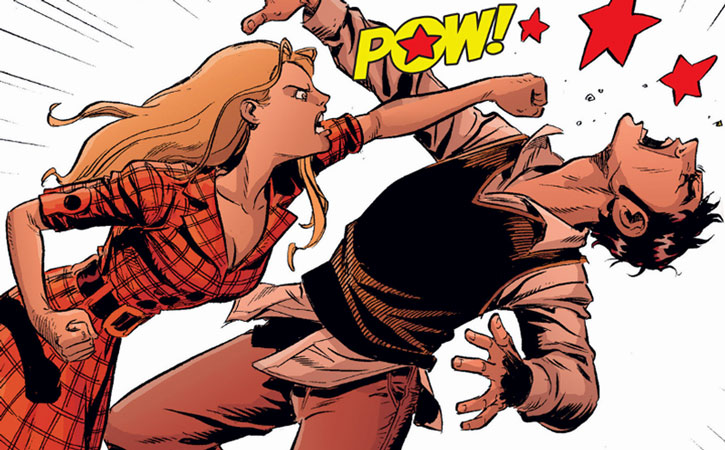 In truth, she’s a calm professional, willing to do anything for the security of Fabletown and its residents. She can also be sarcastic, impatient and brash, and has a cruel streak at times. But none of these are ever at the expense of the mission.

She’ll pretend to be what she needs to be. Furthermore, she is adept at reading people and deciding what approach is best to get what she needs. She isn’t above seducing targets into confessing.

She takes pleasure in the adventure of her role, enjoying the more extreme elements, such as skydiving from the Cloud Kingdoms.

She’s certainly over handsome princes, and dislikes men with that kind of arrogance. Though of course she can hide this dislike.

“For the first time in my clandestine career, I’ve left the world of cloak and dagger skulduggery behind to sink even farther down into a more disreputable activity. Politics. Lordy, how I do hate politics.”

Rose Red: “And I’m willing to take your word on this why exactly ?”
Cinderella: “Because I’m smart and lovely and clearly the leading lady of this particular tale. And my heart, as always, is pure.”

“Thug number two does the expected and tries to pull his gun. Silly cowboy. A gun in close quarters belongs to anyone who wants it bad enough.”

“It’s only in the movies where the hero forgoes taking the guns off the dozens of thugs he kills right and left. In the real spy business we always take all the guns, even if it’s only to throw them away so the bad guys can’t use them. Basic doctrine. I didn’t come armed to the original meeting because I assumed they’d search me. They didn’t even get that much right. Still, I’ve never had trouble helping myself to weapons in situations where there were lots of them around. The bad guys usually bring enough for everyone.”

Bonuses and Limitations:
Eye of the Cat is limited to her Farm assets (see below).

Farm assets:
Cinderella has three assets among the Farm fables, whom she can call on if necessary. These are detailed below. Getting them to her while operating globally often requires magical preparation, and apart from Jenny Wren she has to help them back to the Farm afterwards.

Jenny is a wren who serves Cinderella as aerial surveillance. She’s able to keep pace with small jet planes.

Puss-in-Boots, or the Marquis de Carabas as he prefers being called, is stealthy and of some use in combat.

A mouse who can manipulate the flow of time making it move faster (and possibly more than that). 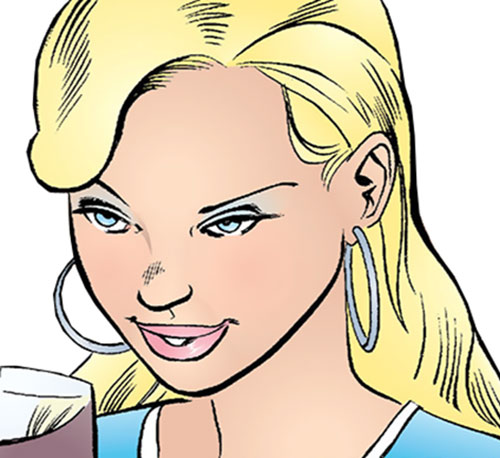 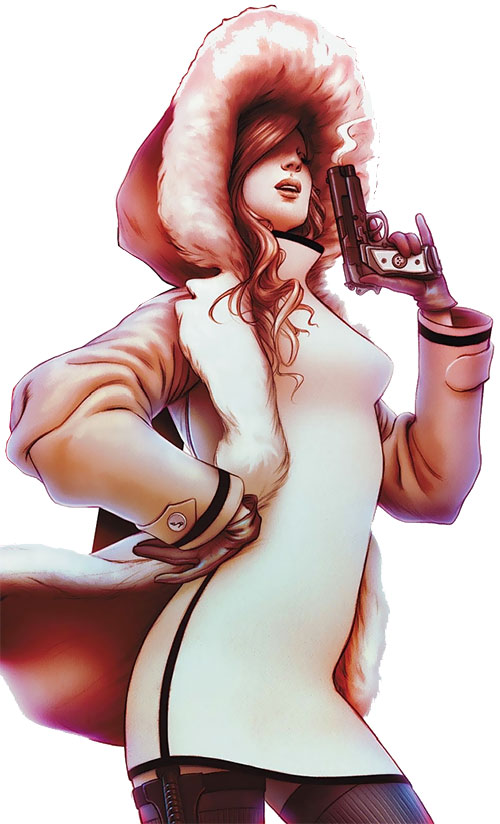 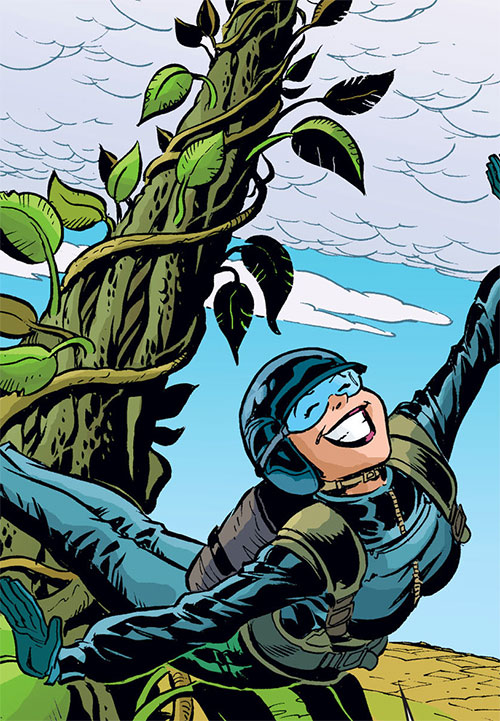 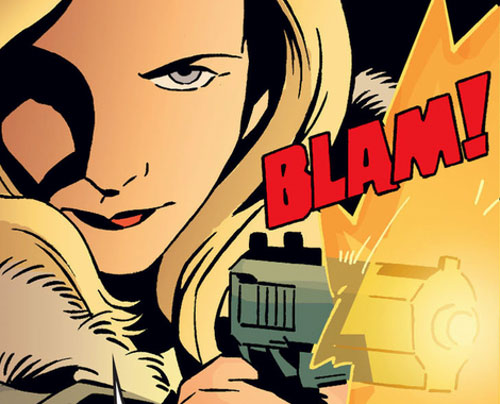 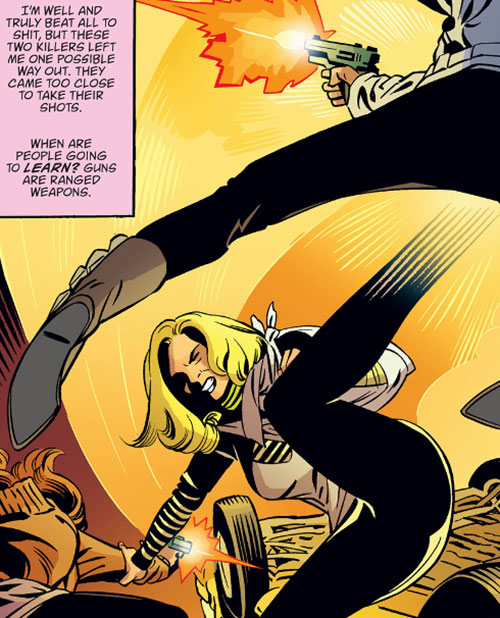 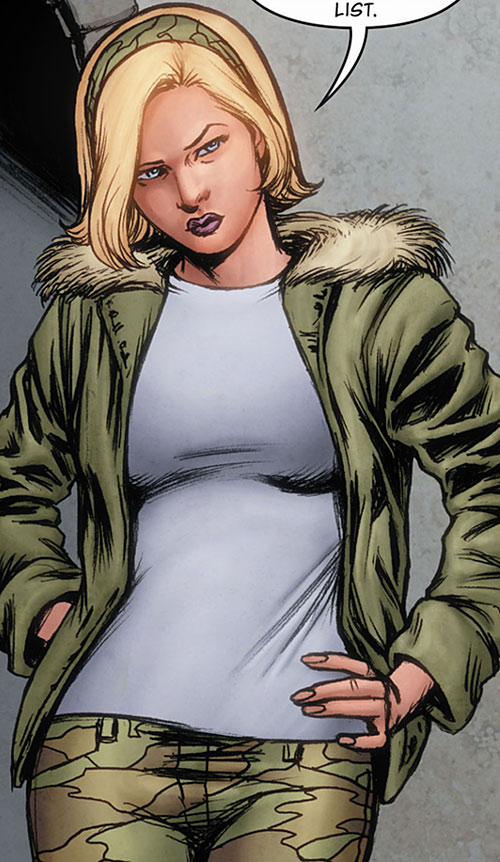 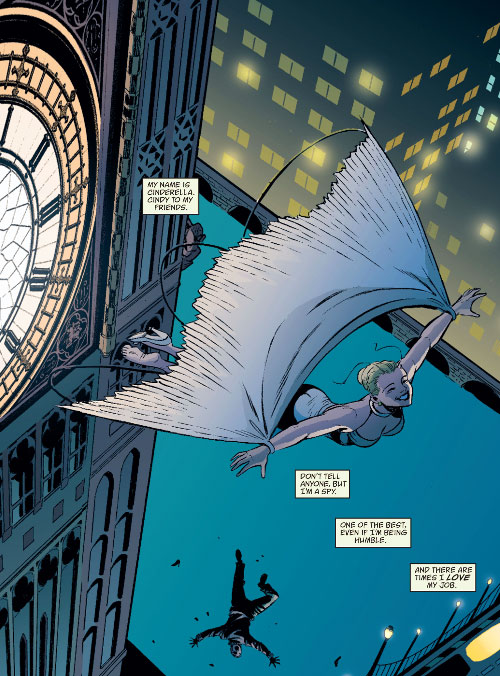 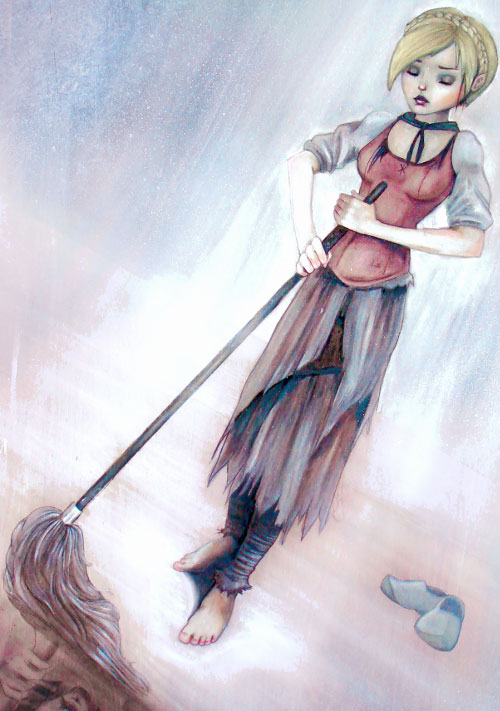 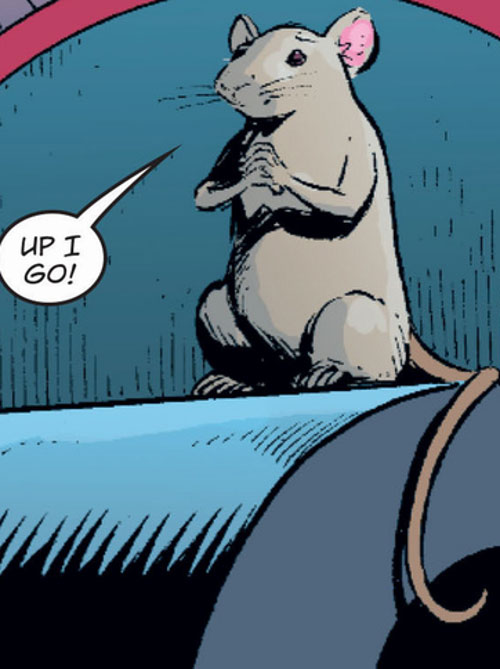 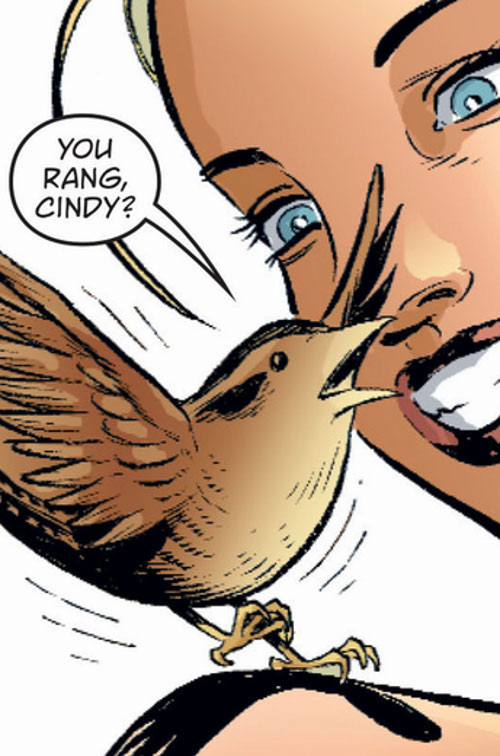 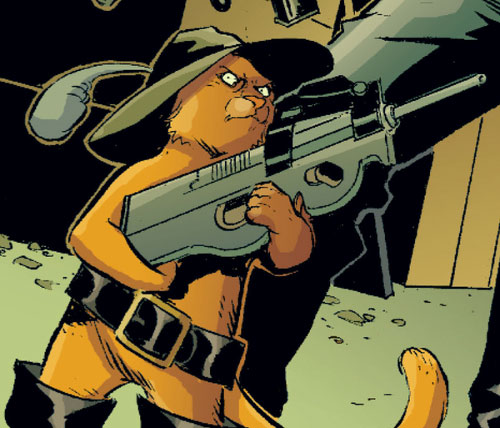