Circuit Breaker is a triplegic Transformer serial killer, first seen in a Transformers comics in 1985.

Which means that she exists on Marvel Comics’ Earth-91274, which was a specific 1980s continuity for the Transformers robots of cartoon and toy fame. Events went a bit differently there. For instance Shockwave did leave Cybertron, and thus features in Circuit Breaker’s origin.

A version of Circuit Breaker also exists on Earth-616The main Marvel Comics version of Earth. But little is known about her.

(This entry’s categories breadcrumb look a bit weird since she debuted during a window where the Transformers G1 comics were set in the Marvel Universe — Ed.).

Circuit Breaker’s suit enables her to:

The suit may have other powers, yet to be specified. 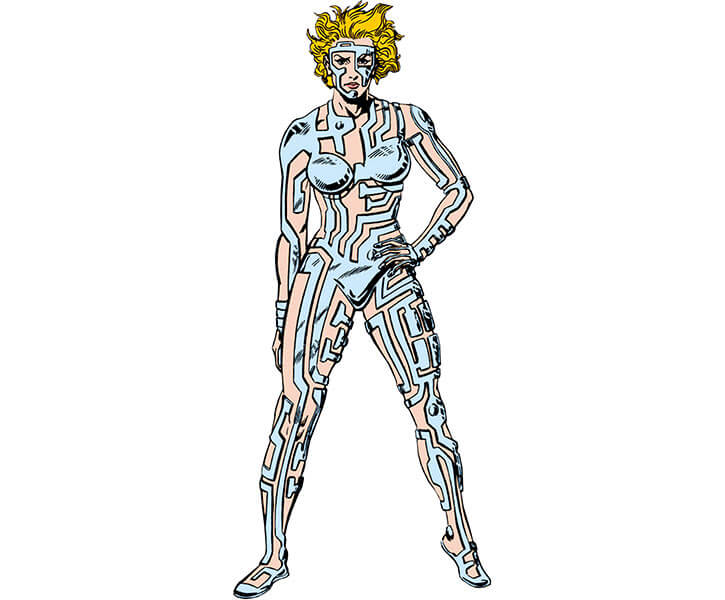 Josie Beller was crippled during on a raid of a Blackrock oil rig by Decepticon Shockwave.

She designed and created a suit of replacement nerve mesh. It was equipped with weapons with which to destroy the Transformers.

She then began her quest for Transformer extinction under the name of Circuit Breaker.

Rage against the machines

Beller demanded to be used as G.B. Blackrock’s secret weapon against all Transformers. She even sabotaged his other weapons to that end.

When Transformers did attack, Josie refused to even try to distinguish Autobots from Decepticons. Circuit Breaker captured seven new Autobots that had recently come to Earth.

However, she had to negotiate for their release for their aid against the Decepticon Battlechargers.

Some months later, Circuit Breaker came to investigate a horror movie actor named Skullgrin. She suspected him of being a Transformer.

Her suspicions turned out to be correct, he was a Decepticon. She attacked him with his own Pretender shell. Skullgrin saved the life of a human co-star, Carissa Carr, but this allowed Circuit Breaker to gain the advantage over him.

A nearby movie producer then offered Beller a huge fee to destroy Skullgrin on camera. Circuit Breaker saw that the producer was more evil than Skullgrin. She destroyed the cameras and left.

Eventually, the Neo-Knights were teleported to Cybertron. They faced with Unicron, sending Circuit Breaker into shock.

Blackrock goaded Circuit Breaker into action by saying the robots were ALL LAUGHING AT HER. She nearly incinerated Unicron’s neural circuits, allowing Optimus Prime to barge into Unicron with the Creation Matrix and destroy him.

After this, Josie Beller’s mind was destroyed forever. 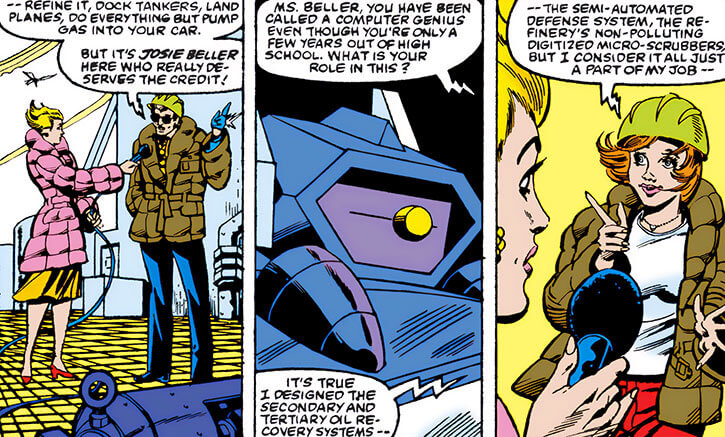 Josie Beller is a fairly attractive young woman of average height. Usually she’s only wearing her replacement nerve suit, a randomly striped metallic suit covering only every other inch of her skin.

After her catastrophe, Josie was consumed by her hatred for Transformers.

“It’s true I designed the secondary and tertiary oil recovery systems, the semi-automated defense system, the non-polluting digitized micro-scrubbers. But I consider it all just part of my job working for Mr. Blackrock.”

“Another robot ! YOU (Jazz) will be the first to feel the sting of Circuit Breaker !”

Starscream: “My jet engines aren’t reacting to my commands–I’m LOSING POWER ! That fleshling–it’s interfering with my electrical systems–but it’s only a HUMAN !”
Circuit Breaker: “And therefore your BETTER, robot !”

“The only good robot is a destroyed robot !”

CPR (Paralyzed except for right arm), CIH (Transformers Doesn’t care what side; to her, they’re all evil).

Writeup completed on the 5th of December, 2020.