Purpose :
The Clan Gamorra’s objective is to become a major mover and shaker in the world’s geopolitical chess board.

Modus operandi :
They offer a safe haven for the scum of the Far East: pirates, smugglers, mercenaries… in the various small ports that surround the coasts of the Gamorra Island.

They developed genetics and cybernetics as a national resource, to sell their cutting edge weaponry to the highest bidder. They use state terrorism to make other countries fear their powers. They rule their residents with an iron fist to ensure order and Kaizen’s authority.

Kaizen Gamorra himself never leaves the Island. As many state criminals, if he puts but a foot outside his country, he would fall under UN’s jurisdiction as a war criminal.

Extent of operations :
Though they rarely directly mess with the major world’s powers like USA, they sell their top technological equipments to any nation, mercenary, terrorist that can afford them. Thus, they are indirectly involved in many crisis, all over the Globe.

Inland, they enforce Kaizen’s dictatorship and try to dispose of the rampant rebellion.

Relationship to conventional authorities :
Clan Gamorra is a sovereign country, so they have representatives at the UN, and can call upon UN’s protection as any other country. Thus, they have ambassadors in and from numerous countries.

Their past as a terrorist nation puts them on the black list of most intelligence agencies. But there are exceptions (such as I.O.), rumored to have made deals with Gamorra. These use the small country to remind their government that there are still major threats out there and their leader (such as Miles Craven) should have free rein.

Former bases of operations :
Japan before the 16th century.

Known enemies :
StormWatch, I.O., Gamorran Rebellion, any WildStorm hero with half a brain had to deal with a Gamorran scheme in his career.

Known allies :
StormWatch, I.O., The Minotaur, the MERCs, Damocles, the Techno-Dwarves who are technical wizards living in the Gamorra Island’s underground.

(It may seem odd that StormWatch and I.O. are both allies and enemies, but the relationship between these two organizations and Gamorra is fluctuating over the time.)

Number of active members :
Though the clan members are restricted to the Gamorra extended family, their henchmen can be estimated in the 10 000.

Number of reserve members :
None.

Organizational structure :
Kaizen Gamorra is the uncontested ruler of the clan. He barely trusts anyone to do his bidding. Though, situations may lead him to hire mercenaries to direct his schemes abroad.

Domestically, his authority is enforced by legions of Hunter-Killers (see below).

Known officers :
Chang (who may or may not be the same Chang as Team 7’s), Dr Vandalia (best cyberdoctor available), Rodox (a Hunter-Killer sidekick of Kaizen-Colt).

Known special agents :
Those are only hired mercenaries :
Minotaur, Borgia, Aries, LeGauche. As it harbors many villainous individuals in its havens, Gamorra can easily rely on a complete set of different skills for hire.

Membership requirements :
Being a member of the Clan itself means being of Kaizen’s family. The Gamorran “citizenship” is granted as any other citizenship, even more easily if the individual has valuable abilities (like technical or military skills).

Major campaigns or accomplishments :
They settled on the Island in the 16th century, enslaving the local population.

Not willing to stay an insignificant nation, they specialized their industry in developing, manufacturing and selling/smuggling hi-tech weapons.

Apart from the tax income provided by its citizens, and the various foreign financial revenues, they make money with the various despicable people that seek refuge on the Island. The constant flow of ever moving villains brings them hard to find knowledge from all around the world.

All in all, it has made Gamorra an important player in the world’s intelligence community, though its present modus operandi prevents it to come out more in the open.

Dr Vandalia, in an attempt to please Kaizen with a great gift, transforms one of Gamorra’s enemy, Cathrina Cupertino, into Cybernary : an evolved version of a Nympho-Droid with the abilities of a Hunter-Killer. To make her even more valuable to his patron’s eyes, he kills his daughter and imprints Cybernary with her personality. But she breaks free and joins the nascent rebellion to overthrow Kaizen.

During the “Fire From Heaven” episode, Kaizen lost everything : the Gen-Factor clone, Damocles’ power, his rulings as he was overthrown by the resistance led by Cybernary and Backlash, even himself as it turned out to be Yon Colt impersonating the imprisoned Kaizen.

The restored original Kaizen, even more despotic than Colt, bombed a British plane with biowarfare agents (indeed a compound derived from the Gen-Factor), bringing the UN’s wrath on the Island. StormWatch Red is dispatched to kill exactly the same amount of people that died in the bombing and to cause as much collateral damage to facilities as possible.

Later, he sends hundreds of SPB  clones to destroy some majors cities, Kaizen wants to imprint his mark on the face of the world, making it clear that it now belongs to him. The Authority interferes and raids Gamorra Island with the Carrier to destroy his clone making facility.

Police forces hired by Clan Gamorra are made of various low ranking criminals fleeing their respective country’s law. Those should be considered as your average cop, except for motivations.

Standard operative :
Gamorran troops are exclusively made of Hunter-Killers. These troopers are zombies, killed, then resuscitated, and heavily cyborged. They still retain some free will. Usually, they were criminals and psychopaths in the time of their real life, and kept their former personality.

This military corps has its hierarchy as any other army. Their aspect is ugly, being half decomposing and half machine, with any sort of apparatus protruding from their skin.

Drawbacks:
Cannot Heal, Strange Appearance, Misc: They’re not entirely reliable, they have the equivalent of a Gadget’s R#2.

What could be considered as Elite operatives, against the already high standard Hunter-Killers, are the SPB clones dispatched to destroy major cities of the world in The Authority 1-4. They are indeed clones of Kaizen’s former brothers (Sum and Wai) that he killed himself to ensure his absolute authority. Still a very good orator, Kaizen had them completely dedicated to his deranged will. Anyway, they fight to death, more or less, as they are initially sent in Kamikazee missions.

Equipment:
Gamorra, as a leading technology nation, has the best in any field of equipment. Indeed, many other nations’ elite forces are provided by Gamorra’s technology (at least Third World’s nations). Furthermore, the Island itself has some serious defensive assets :

Another feature is the Zombots. These are just lesser versions of Hunter-Killers, less sentient and much less reliable, used for exportation to criminal organizations not able to pay for actual cyborgs.

Significant issues :
WildCATs #5-7 (Killer Instinct crossover with Cyberforce #1-3) : All the action takes place in Gamorra. It starts with the assault of Grifter and Zealot on Richtoffen’s research facility, its self-destruction and the investigation for the missing Warblade. Then, Warblade and Ripclaw fight on the Island of the Dead.

StormWatch #6-7 : where Battalion, during the UN’s blockade of the island, leads an undercover extraction operation to rescue the former StormWatch Prime officers.

Cybernary : All the action of Cybernary takes place in Gamorra.

Fire From Heaven : Most of the action takes place on Gamorran soil.

DV8 #12: Ivana strikes a deal with freshly restored Kaizen. Colt, the impostor, was in league with Craven. Ivana suspects there may still be interesting data on I.O. in Gamorra’s archives. The only available source is the Minotaur’s stronghold. She launches her DV8 in a covert operation to retrieve them.

StormWatch #40 : The bombing of a British plane and the retaliation by StormWatch Red.

The Authority #1-4 : Kaizen Gamorra launches attacks on 3 major cities in the world by sending SPBs clones by the hundreds. He wants to carve his clan’s symbol on the globe. Despite the raised shield, the Authority manages to destroy the clone facility by crashing their Carrier on it. 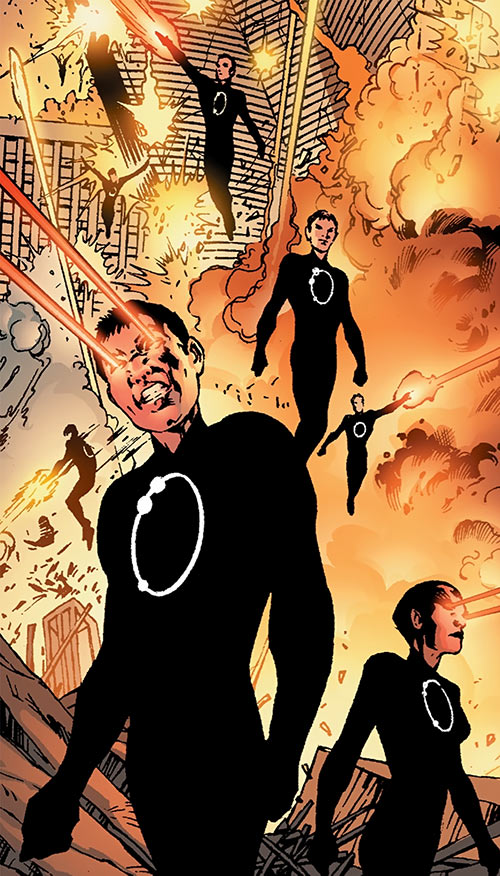