Clarissa seems to be about 6, and appears to be typical of a Blood Elf girl of that age. However, she evidenced a startling mastery of the repair and maintenance of the Large Daddy mecha, working swiftly and with impressive assurance on this extremely advanced vehicle.

She is an adorable little angel, and most adults around her will go out of their way to make sure she’s OK.

Blood Elves can absorb and “eat” magic, though they have to release it periodically as an ethereal explosion to avoid developing an addiction and eventually a degenerative condition. Clarissa is presumably too young to absorb meaningful measures of mana, much less release significant shocks.

Large Daddy is a giant humanoid mecha of extraordinary power. Its left arm is a huge flamethrower, and its right arm is an equally large “cold thrower”. 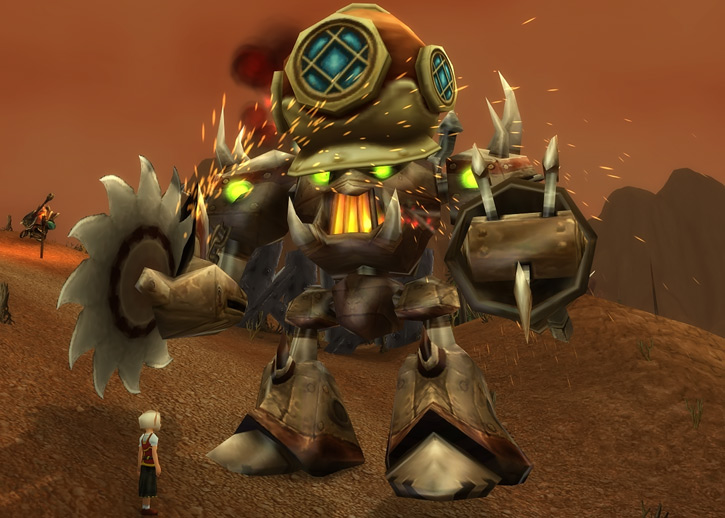 Its left arm can also be turned into a powerful magnet to capture nearby armoured enemies. Once they are stuck on its left arm, Large Daddy can reverse the polarity and swing his arm to hurl its captives away, presumably to their death.

Large Daddy includes a cockpit for an operator, though it’s way too large for Clarissa to pilot. It can be “driven” without much training, as there seem to be expert systems to handle the walking and aiming weapons.

Of course, the weapons don’t require much aiming anyway given the sheer volume of flame or cold they pour out.

Clarissa is a sort of camp mascot at the Horde  fortress of Krom’Gar, in the Stonetalon mountains. This forward base was established during Garrosh Hellscream’s all-out offensive against the Night Elves to conquer all of Kalimdor .

Oddly enough, nobody knows where she comes from – but she hates the Alliance . One possible hypothesis is that she is the child of Blood Elves engineers who came very early during the Horde’s invasion of Stonetalon, but were killed by the Alliance before Overlord Krom’Gar took command of the fortress.

Clarissa is the custodian of an overpowering mecha she calls “Large Daddy” or “Mister D.”. This mecha was sabotaged and disassembled early during the military campaign in Stonetalon – in fact, it may never have been deployed at all.

From context, one suspects that the raid to steal Mister D.’s key systems was done by the Venture Company . These less-than-ethical entrepreneurs used to be an important presence in Stonetalon and continued some operations even while the war was in full swing there.

The Venture Company’s head engineer there, the sinister, irradiated gnome Gerenzo Wrenchwhistle is know for a few things – his cybernetic arm, being an horrible and ruthless person, and never hesitating to steal major inventions to study them.

It thus seems likely he had the systems stolen then hidden in dispersed hideouts (to prevent the Horde from reconstructing Big Daddy), and kept the mecha’s head for personal study.

Thanks to a special agent of the Horde, Large Daddy was reassembled by Clarissa and made a brief but devastating sortie against Alliance troops. What happened next is unrevealed – especially since, mere days later, Overlord Krom’Gar was… relieved of his command in chaotic circumstances.

Clarissa is an adorable little girl, primarily motivated by promises of ice cream (how and why ice cream is available on a Horde FOB  is unrevealed – perhaps Overlord Krom’Gar has a private stash). She treats Large Daddy much like a favourite doll, talking to it as if it were a person and play-acting with it.

She hates the Alliance and particularly gnomes, but isn’t intense about it.

“Mister D. needs a guiding angel ! Will you be that angel, miss ? Pleeeeaaaase ? Pretty please with sugar on top ?!”

“All good girls listen to their daddies !”

Clarissa and Large Daddy (as well as much of Clarissa’s dialogue and the quest reward) are references to the Bioshock  video game. This is just skin-deep though, and no narrative elements from Bioshock are used.

In Bioshock mutated, brainwashed and horribly exploited little girls called Little Sisters  are tasked with harvesting a key resource. They are also given a heavily mutated and armoured bodyguard, called a Big Daddy  (or “Mister Bubbles”/”Mister B.” for the Little Sisters) whose armour evokes a deep sea diving suit.

If you want to use Bioshock themes, a possible (and totally not supported by WoW) scenario is :

A nearly identical character, Alice and her Big Poppa mecha, can be found by Alliance characters in an Alliance base in the same zone, with identical quests.

We assume that the two aren’t meant to exist in the same world. This is common in World of Warcraft. For instance in nearby Ashenvale, the person helping the elements fight Magmathar is a different one depending upon whether the player character is Horde or Alliance.

But something really weird could be happening behind the scenes, with Clarissa and Alice both existing in the same version of Azeroth at the same time. The backstory can’t be exactly the one we suggested, though, since Alice is Human.

Bonuses and Limitations:
Shrinking is Always On and Form Function (at least until she grows up). It is already factored into her STR and BODY.

Adorable works exactly like Attractive, except that the bonus applies against all adults who are at least vaguely capable of acting like responsible parents.

Skills:
Accuracy (Its own weapon systems): 05

Drawbacks:
SPR (No manipulative appendages), MPR (Too heavy to swim).