Reward – 10 000 dreknars for the head and right hand of Claw ! The world trembles before his deadly blade !

Claw was one of the swords-and-sorcery heroes DC launched in the mid-1970s. He was the most successful of the lot, along with the Warlord (Travis Morgan).

Part of his (relative) popularity is that he’s essentially the DC version of Conan. With a strong hook — a demon hand — grafted on.

Claws’s original setting, the Known World, was sketched out by writer David Michelinie. It feels very much like a 1970s or 1980s home-cooked Dungeons & Dragons campaign.

(For historical context, Claw was published in 1975 and the very first edition of D&D was released in 1974.)

The interpretation of Claw varies from series to series.

For purposes of characterisation and stats, this profile considers that Michelinie’s 1970s take on the character is the most authoritative one. Therefore, we downplay or rationalise changes introduced in other takes.

The 1970s version was obviously inspired by Howard’s Conan. Whereas the subsequent versions are shaped by the movie version of Conan starring Schwarzenegger.

The latter thus feel more… generic to readers familiar with the 1982 movie. Since it greatly influenced the popular view of heroic-fantasy barbarian warriors. Claw can thus end up as “generic ripped barbarian, but with a curse”.

This article ended up covering a *lot* of ground. It’s therefore much too long for most readers.

So for everyone’s comfort it’s broken up into four chapters : 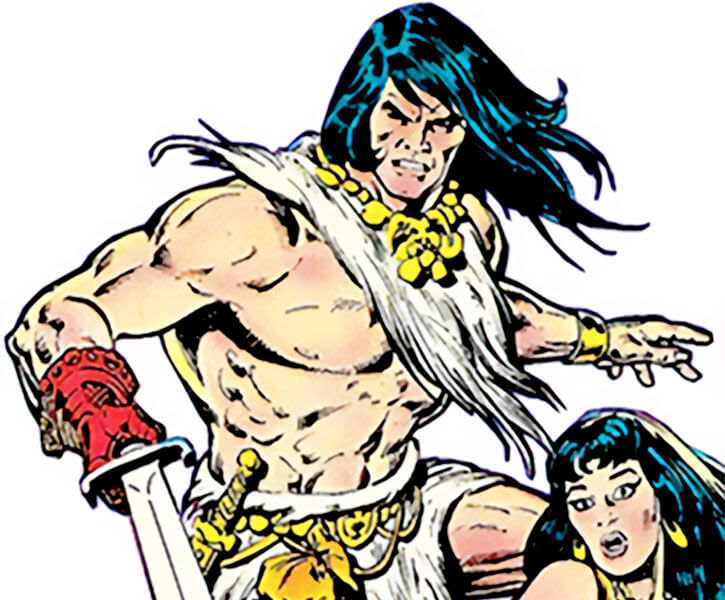 Music from a 1970s fantasy movie would be nice here, but that means we have little material to draw from. There wasn’t a tonne of those.

Mmm, Zardoz would be a bit of an oddball choice, but it fits. The opening music was a version of Beethoven’s seventh. Second movement, I think.

The fuller version that used to be here has been removed, so here’s a short one.

https://www.youtube.com/watch?v=H1fADiUWv48
Many versions of the seventh are available for download on Amazon, but TMK not Munrow’s one.

Valcan aka Claw is an athlete of awesome strength and prowess, able with the sword and quick as a cat.

Having been trained by the gods, he can easily fight groups of men on his own.

He has excellent endurance.

His killer instinct is exceptional, and he can enter a fighting frenzy whenever needed.

All that and brains too

Claw is not just a musclebound barbarian with quick reflexes. When he’s in trouble he swiftly comes up with clever strategies. These often rely on understanding basic physics and on quickly considering what’s usable around him.

If the direct approach — his favourite one — doesn’t work, he’ll probably find a good alternative.

His understanding of physics is close to that of a modern person. He has used such things as :

He also had notions of zoology despite his amnesia. Thus he could reason that a somewhat lobster-like giant monster likely had a soft underbelly.

In later appearances, Claw’s cunning and agility were less apparent. A No-Prize HypothesisA made-up explanation to plug a plot hole would be that it was a side effect of :

Claw’s gauntlet has magical protective properties. It could :

Claw has also occasionally wielded magical items for a while, including :

Generally, though, Valcan’s equipment — with the important exception of the gauntlet — has a transient quality. It tends to disappear, gets broken, be abandoned, etc. and quickly replaced by similar gear. 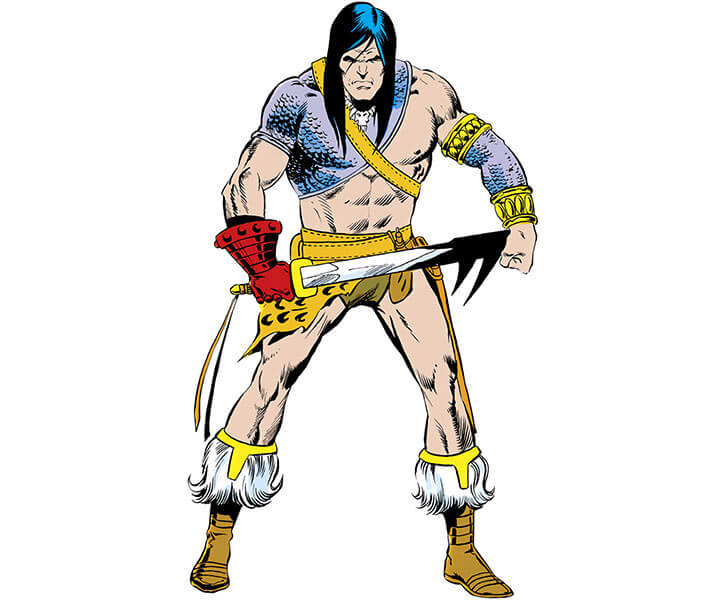 It looks like a webbed, clawed, vaguely draconic hand. It has an intelligence of its own, and its own instincts and agenda.

Claw’s red gauntlet was given to him to shield him from the hand’s evil influence. But the appendage has been getting stronger, and has been known to take over Claw even when he’s wearing the gauntlet.

In game terms the Hand is simply considered an asset. Claws’s player is the one who decides when to resort to the hand’s Powers.

In the story having the hand take over is a terrible curse and something evil. But the reader cannot help but to observe that the hand only ever takes over to get Claw out of a problem. One that even his great skills cannot solve.

When the hand is thus free to act, it is evil and bloodthirsty. This sinister aspect is best left to role-playing – and in DC Heroes RPG terms the Catastrophic Rage Drawback that the exposed hand activates.

Claw prefers to conserve his Hero pointsDC Heroes RPG concept expressing narrative importance/immunity. When he does spend them, his hand will “accidentally” get exposed, providing a rationale for the sudden jump in strength, ferocity, toughness, etc..

Sometimes, Valcan deliberately gets the gauntlet off to claw at something with the hand. Most often, the gauntlet is accidentally taken off and the hand lashes out at Claw’s enemies.

Sometimes, the hand just takes over as Claw seems doomed. It puts Claw in a trance and controls his body. For instance to have him mumble incantations as the hand casts a demonic spell to save him.

Sometimes, the hand reacts on its own before Claw can notice. One example was grabbing the dagger of a man about to backstab Claw and twisting the man’s arm to pierce him in the heart with his own weapon.

All of these cases are under the control of Claw’s player. Even though in role-playing terms they involve a struggle of influence.

The ungloved hand can claw at foes with a speed, ferocity and strength that outshine even Claw’s. Usually the claw viciously gouges the flesh of opponents. It is extremely strong, and can crush and break metallic chains it grasp.

If Claw surrenders to the hand’s influence, he will usually fight with the demon hand plus a sword in his human hand. This ferocious fighting style has nearly superhuman effectiveness.

The hand does not need to sleep, eat, breathe or drink. And it doesn’t feel pain.

That it doesn’t sleep means it can perceive a danger when Valcan is sleeping, and take control of his body as he wakes up. This has saved the Unconquered’s life several times given the treacherous nature of Pytharia. 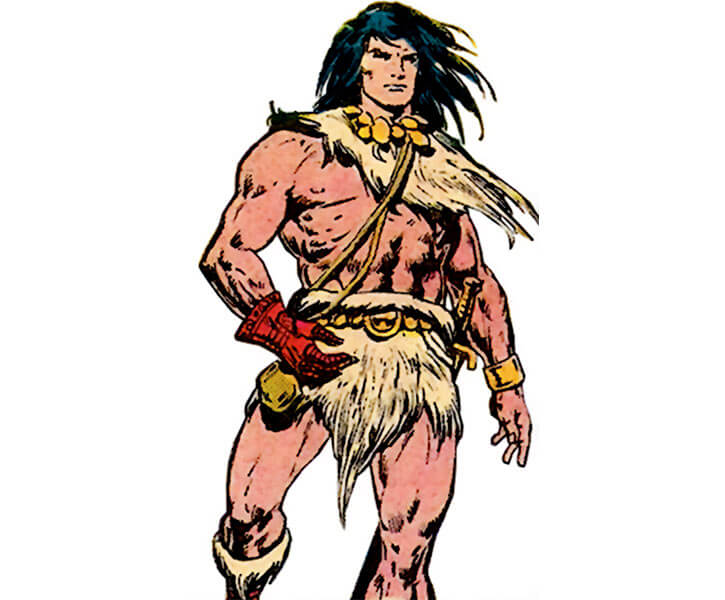 Furthermore, the hand can cast spells such as :

The hand could also set itself ablaze with demon fire without holding a sword. But in both cases this incendiary ability was used to harm entities closely linked to chaos, and it’s never used otherwise.

We’ll thus assume that this spell is specifically meant to hurt chaos entities, and is not useful under other circumstances.

The hand demonstrated an affinity for portals to the chaos hells (“void planes”). Beyond sucking evil fire into said hells, it was once able to grasp the astral projection of a sorceress by the throat. Normally, this is impossible.

Doing this requires a particular effort and mindset. Most of the time the hand cannot touch astral beings any more than a normal person can.

The hand likely could hurt people through other sorts of magical connection such as clairvoyance or scrying. But this is an hypothetical.

Some rituals have a demon’s hand just like Valcan’s as a key component. These usually have to do with opening major dimensional breaches. 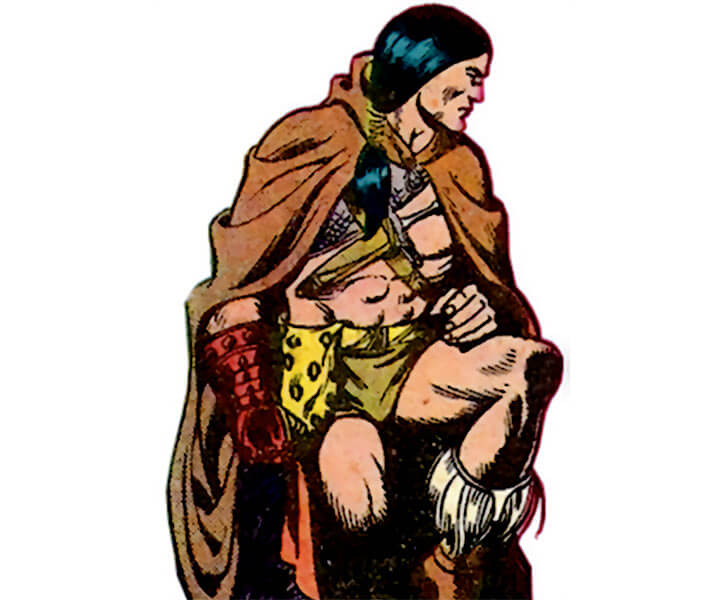 When the demon hand is hacked off Valcan’s body, it has several options.

In the original stories the hand is obviously sapientCapable of intelligent reasoning and sentient. In later stories it is still powerful and evil, but never seems to act on its own (though one scene is ambiguous).

My No-Prize Hypothesis would be that the hand had been preparing a ritual to be able to exist as two hands once Valcan would again chop it off – which he was bound to do sooner or later. But that was a long-term investment.

Furthermore, the magic came at a steep cost in making the hand less wilful – and less able to control its own evil.

In this hypothesis, the hand expected that the intelligence and maturity of both hands would regrow to their original level in time.

When he encounters Red Sonja, the blood of the hand has mingled with Valcan’s blood in greater quantities than ever before. This gives him the regenerative powers of a demon.

Presumably this was a gradual process.

It also would be reasonable to assume that Valcan already had a very minor level of regeneration during the original stories. Back then nobody would have noticed, as it would still have been within the remit of being a fast healer. Not a surprising trait in a hardy barbarian warrior.

When he met Sonja, Claw visibly has a healing factorThe power to heal wounds and regrow tissues, like Wolverine. It seems about as strong’s as the hand’s own regenerative power, and thus might be the maximum.

Our No-Prize Hypothesis is that it follows a power law progression, staying at low levels for years then quickly building up until it hit its ceiling within weeks.

At the end of the encounter with Sonja, Claw lost his healing factor. The hand needed to focus its regenerative powers back into itself to grow back after having been severed. Afterwards Claw had, at most, the recuperative powers that he had in the classic stories.

When he had this level of Regeneration, Claw was slower, physically and mentally.

One hypothesis is to assume that the demon blood fatigues and confuses him. This physical and mental haze lifted when he was convinced to surrender to the evil within himself.

This profile uses these regenerative abilities as a No-Prize rationale for why Claw’s characterization, swiftness and acumen are different in the Claw/Red Sonja miniseries. But the material itself never establishes a link between the new regenerative powers and Claw’s personality and abilities.

Yet our No-Prize Hypothesis matches all observed facts. 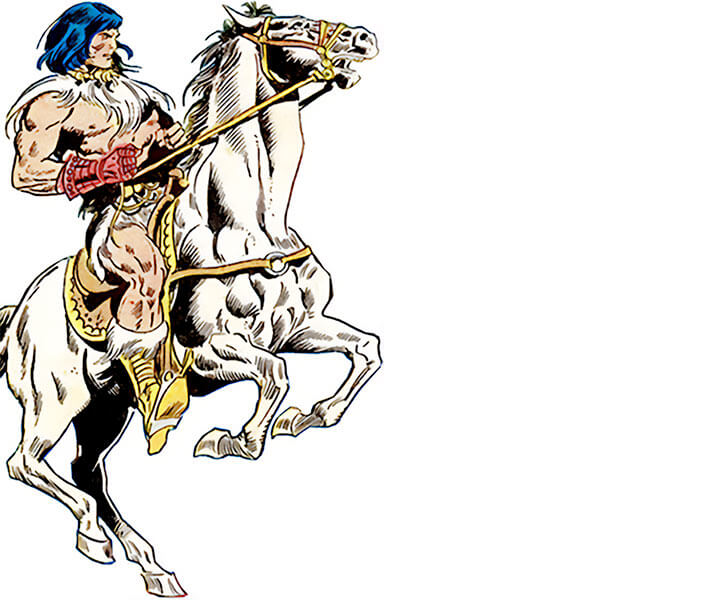 The two 2005/2006 Claw series have an unclear continuity status relative to the original.

The Wildstorm series also makes a point of using a new name of unknown origin (Valcan Scaramax) and never calling him Valcan of Pytharia.

However, a key plot element is that Claw’s demon hand has regrown after it was severed. Which references the Claw/Red Sonja story.

In the end I’ve decided to do the No-Prize Shuffle. My stance is that both series were about the same Claw and formed a single continuity with the previous appearances.

This profile’s History sections offer hacks to make it all fit together.

The version that appears in the Creatures Commando LS, however, is considered in this entry not to be the same character, but a descendant.

In the next chapter, we’ll recap Valcan’s barbaric history ! 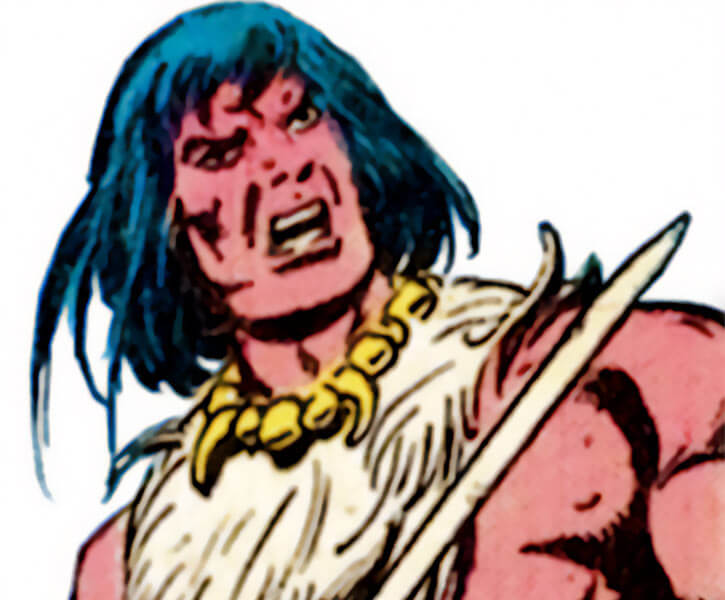 Source of Character: Claw the Unconquered (DC comics) and later appearances and crossovers.