This entry is a chapter within a series. Said series goeth :

He is usually seen in fantasy barbarian attire, wearing a crimson gauntlet on his right hand and a good broadsword.

This bronzed skin tone is different from that of most people around him.

Interestingly, while he has European-looking facial features he doesn’t seem to grow significant facial hair.

Some later stories go all the way and portray him with typical comic-book-Native-American features and hair. But that’s the minority.

Claw himself noted that he wasn’t sure that he was of the same ethnicity — or even species — as most other humans in Pytharia.

(Though I must note that cheap comic book colour printing back then resulted in strange constraints as to human skin tones. This was particularly notable for East-Asian characters. So the reddish tint to Claw’s skin might mostly be a product of limited hues availability). 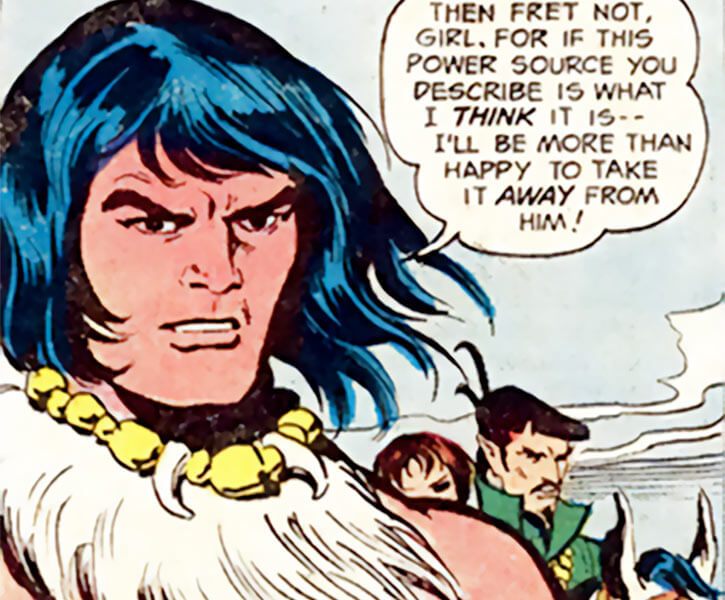 Valcan does not remember who he is. He became aware while wandering in a desert, his only possessions being a good broadsword, a crimson gauntlet, some gold and a gnawing sense of unquiet destiny.

He is essentially a loner. And make no mistake, he is a grim barbarian.

Valcan isn’t terribly talkative. But when he speaks he doesn’t express himself like the stereotypical barbarian warrior. He’s articulate and speaks elegantly, with something of a theatrical manner. Like a character in a XVIIth century play.

Later appearances have him speak in a more modern fashion. They also accentuate his grumpiness.

Valcan’s favourite exclamation is “Soth !” – the name of the god of chance. Or rather it was. By the time he fought for Satarina, he had grown convinced that Soth was dead.

This may have been true in a sense. In our interpretation, he may have been fighting on planes too steeped in chaos for the Gods of Elder Light — such as Soth — to reach him. 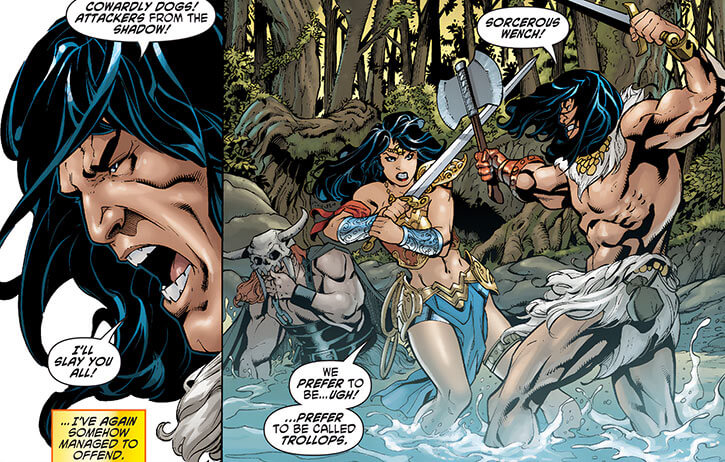 One of Claw’s characterisation hooks is that he’d rather not act heroically.

He tries to project the impression that he’s an amoral, cynical hardarse. Claw seems to genuinely regret having a conscience he can but seldom ignore. He feels chained by it whereas he’d prefer having his freedom.

He’s not even much of a mercenary. He agrees to sell his sword for money, knowledge or other necessities, but his needs are modest :

However, Valcan’s instincts are those of law, not chaos.

He doesn’t like admitting it, but seeing innocents suffer, those without power treated without consideration, destruction in the name of personal interest and the like anger him. He feels he should do something about it.

However, his common sense tells him not to. There will usually be hesitation and a need for an outside party or event to coax Claw into intervening. He will argue against it, pretend that he doesn’t care, start riding away, insist that if he ends up doing some good then it’ll be incidental and not because he’s a hero, etc..

Yet he can always be convinced not to act like a callous mercenary only looking out for number one.

None of you can make the grade

Part of Claw’s attitude about refusing to be a hero stems from the poor respect for law in his world. Pytharia is in balance. Therefore, most people are greedy and trying to subvert what laws do exist for personal benefit. Claw discovered all this as a wandering amnesiac.

These experiences led him to consider that these people weren’t really worth saving. As he sees it, they are better left to their own devices to doom themselves.

In the end, though, he cannot really let them do that. Especially when it comes to children, women, outcasts and other people at the mercy of those who have a modicum of strength and power.

Reign of the demon claw

The other big hook is the demon hand.

The hand seems to be able to subtly manipulate his temper. Without the protection of his gauntlet, Claw will be filled with cruelty, evil and disgust.

He is cursed. He knows it and doesn’t like it.

Originally the hand is used as a bit of a deus ex machina. But as time goes by and its power grows it becomes increasingly sinister. It eventually veers the genre of Claw stories toward horror. 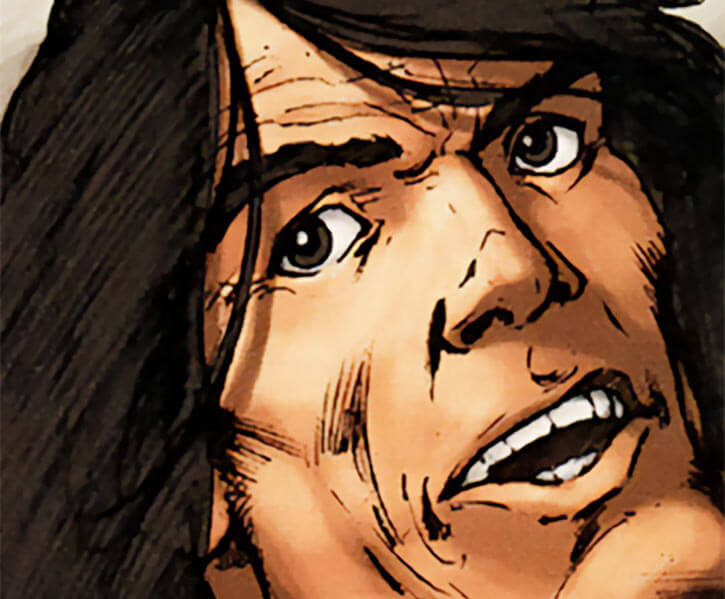 How badly the demon paw influences Claw varies. In the original story he’s OK as long as he wears the gauntlet. And when the gloved hand does something Claw doesn’t want it too it’s almost always to save his life.

However, without the gauntlet it makes Valcan susceptible to murderous rages and killing frenzies. The life of his companions is clearly in danger when Claw does not have his gauntlet.

As the influence of the hand asserts itself, the blood thirst worsens even with the gauntlet on.

At the peak of the hand’s influence, on what is thought to have been a void plane, Valcan was beset by constant visions of carnage and cruel slaughter at his hand,. He was also becoming unable to tell the difference between these visions and reality.

After the hand is severed by Sonja, Valcan recovers control. The hand once more becomes an asset, though it evidences a markedly lower level of initiative.

Yet Valcan seems to become more violent, more hostile, more xenophobic and more prone to wanting to satisfy his carnal urges as time goes. He becomes less of a crafty wanderer and reluctant hero, and more of an amoral, brutal barbarian who’s out for blood, wenches and gold.

Yes, this is presumably just writing Claw as a stock fantasy barbarian character as this cliché evolves. But a simple No-Prize HypothesisA made-up explanation to plug a plot hole is that it’s the influence of the hand wearing him down. It is increasingly making him more of a champion of chaos than a champion of law. 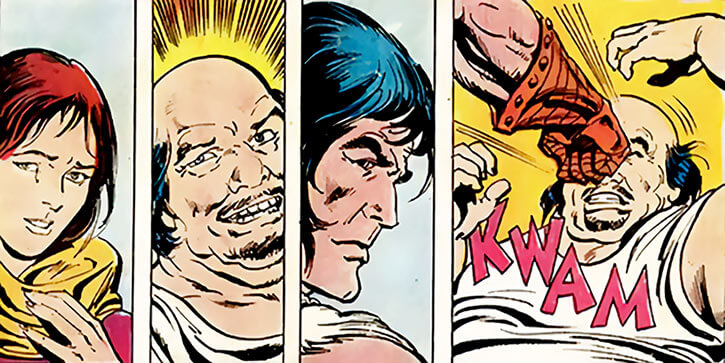 One of my favourite comic book sequences ever.

By the time he allies with Satarina, the Unconquered is clearly serving evil in the foolish hope that it will rid him of his claw.

The subsequent experience with the Shades likely shocked this out of his system.

Still, one must point out that Valcan always had a rash tendency to take whatever he needed, and damn the consequences. For instance in one of the original stories he was about to take the last Grimstone fragment, even knowing that it would doom an entire underwater city to extinction.

The difference is that back then he was easily convinced not to carry out unethical acts. Usually by being talked to by Ghilkyn, but sometimes just by thinking about the consequences.

As he toils in what seem to be a void plane, there’s scant ethical persons around, and there’s a clear sense of despair in the air, these inhibitions disappear.

In the original stories, Claw has an unflappable and open-minded character.

He grumbles about sorcery and corruption, but he doesn’t really mind associating with strange creatures, travelling to other dimensionsOther realms of existence that are not our universe and encountering strange and disgusting things. He adapts quickly to the oddest surroundings and associates.

This is in part because back then he had a clear sense of purpose. He was to discover his own past during his earliest career, then he was to avenge his parents, then he was to recover the oraculum gauntlet. Thus, his pragmatism meant that he just dealt with the weirdness in his way.

Later on, as Valcan is portrayed as more of a stock barbarian and less of a goal-focused pragmatist. He acquires a certain hostility toward sorcery, strange persons, women as anything but sex objects, etc.. Though he will come to treat powerful warriors like Sonja or Diana as equals.

He’s also not as smart, and much less likely to come up with lateral thinking solutions.

His manner of speech is still heroic-fantasy-ish, but is significantly less theatrical.

One constant is that Valcan feels a profound repugnance at being anybody’s tool or catspaw. He’s just too attached to his freedom. He’ll balk at any indication that he’s being figuratively strongarmed into an alliance, though alliances of convenience or necessity are fine.

He’ll agree to serve as a mercenary. But no one buys Valcan’s loyalty and if he feels like deserting to pursue another activity, he’ll just ride away.

And of course he doesn’t want to project the impression that he’s constrained by a code of ethics.

As time goes by, this gets easier since his law-aligned ethics are eroding under the demon hand’s pressure.

Axeman: “Aye, but Jarmal’s carcass pulls his sword from him ! And he’ll not escape me so—”
Claw: “You talk too much, axeman ! Allow me to cure you of that vulgar habit !” [KRAK]

Mahan K’Handa: “Forgive me, Pytharian. I neglected to mention the spell of protection I’ve cast about Moonthorn. It is impenetrable — and shall endure until the event of my — unlikely demise !”
Claw: “In that case, wizard. Allow me to hasten along that ‘unlikely’ circumstance !” [Throws sword]

“Perhaps it is demon blood this sea of gore cries out for !”

“Gods ! Is there no end to the monsters prowling this world ?”

“Soth ! I should have known there’d be guardians more formidable than that silken-haired wench !”

(As a deformed giant kills his mount under him) “By the seven hells, that was a good horse ! The beast makes this a personal fight !”

(After killing off looters and would-be rapists) “’twas not nobility, girl, but necessity. We require information, and you seemed the likeliest source.”

“My preferences change not. I still have no love for this world. But, unfortunately, it’s the only world I’ve got.”

“Hmph. Care for a world that stalks me for the price on my head ? No, I seek the silver sword because it might offer a clue to my shadowed past — and if I happen to save a world in the bargain, ’tis no fault of my own.” 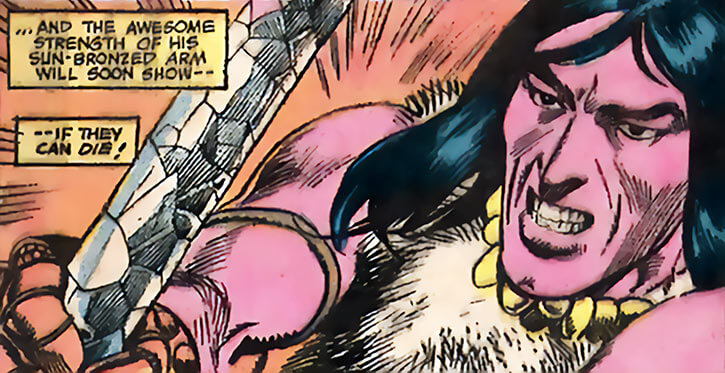 Claw the Unconquered (during the classic stories) 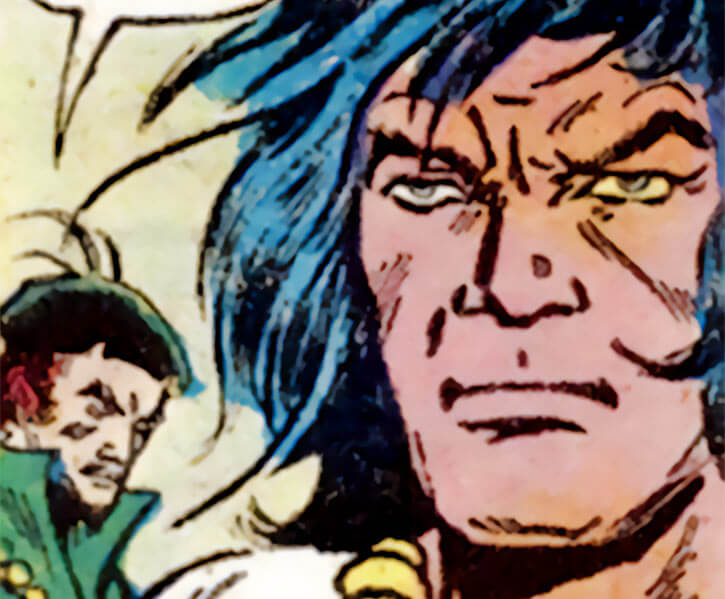 As described in the “Demon’s blood !” subsection of the Powers & Abilities section, Claw once clearly had Regeneration. He also may have had a very low level of Regeneration all along. In DCH terms :

The demonic hand of Valcan

In game terms the Hand is simply considered as an Artefact (a mystical Gadget) with the following stats :

Leadership can only be used on the person bearing the hand. 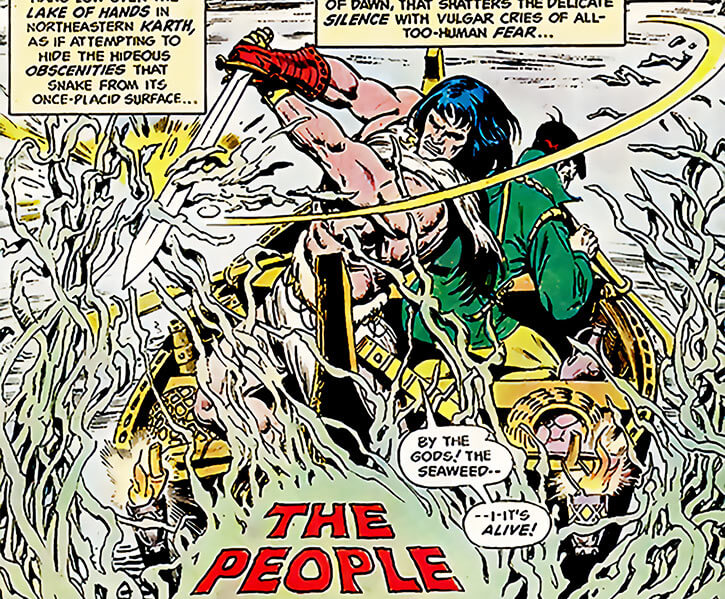 Oraculum gauntlet ● 1 point (Noticeable, Easily Removable)
Immunity to all fire effects, all magic effects (both Limited 1 – to Half-Effect) (both Limited 2 – only protects the hand beneath the gauntlet, not Claw).

* Without Defensive Roll.
** When the demon hand is active.

Claw has been known to have Regeneration 03 (see the Demon’s Blood ! subsection in the Powers & Abilities section) but this came at a steep cost, lowering every Attribute but his Strength and Stamina by 02.

Source of Character: Claw the Unconquered (DC comics) and later appearances and crossovers.