The original Clayface (Basil Karlo) was a minor horror-themed Batman villain. He and his Silver AgeSuper-hero comics from the late 1950s to the early 1970s namesake, Matt Hagen, originally had few appearances.

But things started picking up in 1989. A number of Clayface-related characters oozed in. These were used to add horror and body horror elements in Batman stories.

Sondra Fuller was the fourth person to use the Clayface name. She first appeared in 1987, joining the Clayface mini-mythos. 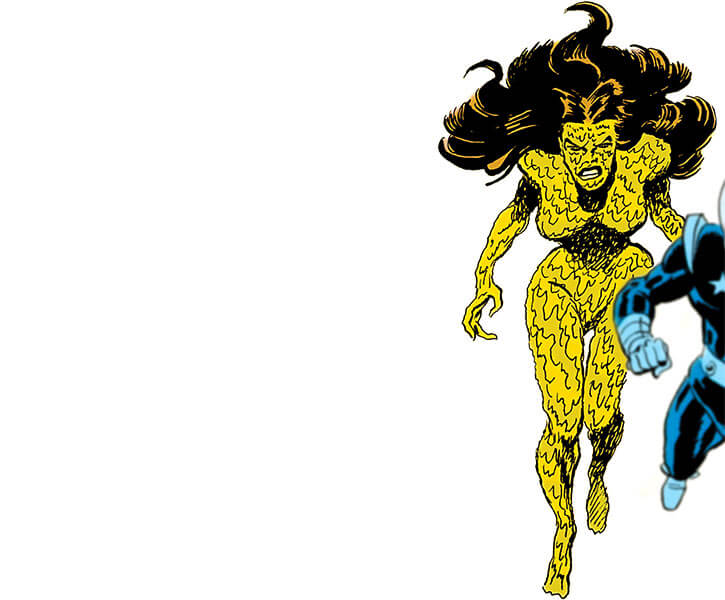 Somehow, Clayface retains some approximation of a human metabolism. She can be drugged, she still has blood, she can get pregnant, etc.. Yet Hush (Thomas Elliot) mentions that her biological material is barely recognizable as human.

She seems to have had Kobra field training, and is a capable undercover operative. She also has significant wilderness survival experience. 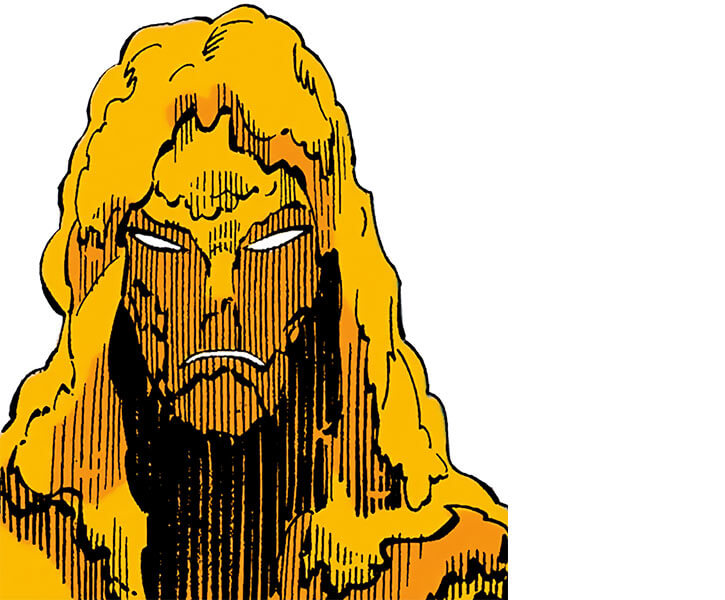 Abilities she has mimicked include :

Clayface’s copied telekinesis seemed almost as strong as Looker’s. But her telepathic powers were markedly weaker.

The band only had one successful album. But it was a competent and catchy one.

The fourth Clayface was born hideous.

This might have been caused by an inborn condition – such as a bad case of McCune-Albright Syndrome  . Or it may simply have been extraordinarily bad luck at the genetic roulette.

Her condition drove her to accept Clayface powers from Kobra. She then joined his Strike Force Kobra team.

(Most Strike Force members were patterned after obscure 1960/61 Batman foes. Clayface II (Matt Hagen) did debut in a 1961 Batman story, though he was a bit more prominent than the others).

(Fuller’s powers are likely based on Hagen’s. Her additional capabilities — such as duplicating psychic powers — may be because the Clayface alterations also expressed her metagene.)

Clayface was the star operative during Kobra’s 1987 plot against the Outsiders. She :

Telepathic interrogation of Clayface allowed the Outsiders to react to Kobra’s plot.

Meanwhile, Clayface was kept sedated. But she realised that the drugs dosage had been calculated for her base weight. She morphedImpossibly shifting into another forminto an elephant, breaking both the sedation and her cell’s door.

Ms. Fuller managed to rejoin Strike Force Kobra as they were fighting the Outsiders. She engaged Looker, but was stunned by a telepathic blast. The shock forced her back to her baseline form.

Seeing Fuller’s true face, and how bitter she was about it, Briggs couldn’t bring herself to arrest her. Clayface thus fled the scene. 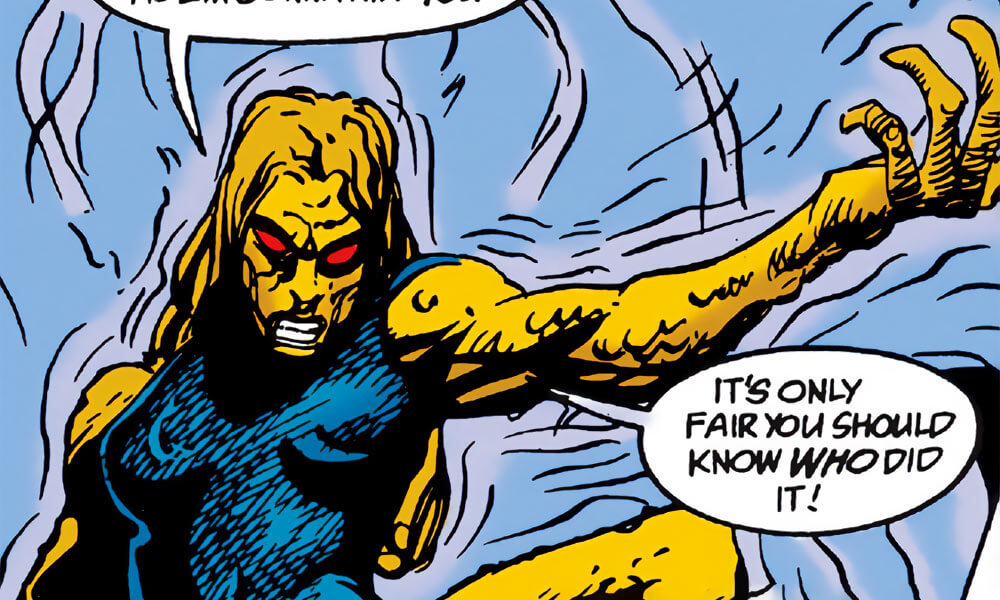 For years, Ms. Fuller impersonated rich and gorgeous celebrities. She enjoyed the adulation and luxury of her purloinedStolen lives.

However, not having an identity of her own ate at her. It worsened her self-worth issues.

Bereft of direction, she started visiting the original Clayface. Actor and murderer Basil Karlo was reaching the end of his lengthy prison sentence. Ms. Fuller decided that he was a fellow outcast and her friend, though it felt forced.

As their first move, Mr. Karlo had her break Clayface (Preston Payne) out of prison. Though Payne was dangerously incoherent, Fuller could keep him under control by mimicking Looker’s appearance and telepathy.

This conspiracy of Clayfaces called itself the Mud Pack. Karlo also procured the remains of the second Clayface (Matt Hagen), to theatrically pretend all Clayfaces were part of the Pack.

Rise and fall of the Mud Pack

Fuller impersonated Batman to make him look like Payne’s criminal accomplice. As Karlo hoped, this reeled Wayne in at the scene of their next heist.

Batman was captured, in part due to shock over seeing Clayface Four morph into the recently deceased Robin (Jason Todd). With some reluctance, Clayface used Looker’s telepathy to help Karlo torture Batman.

However, the original Clayface’s real plot wasn’t revenge. He drugged Clayface IV unconscious, to take some of her blood.

Karlo then injected himself with a mixture of Fuller, Payne and Hagen’s blood to become the “Ultimate Clayface”. 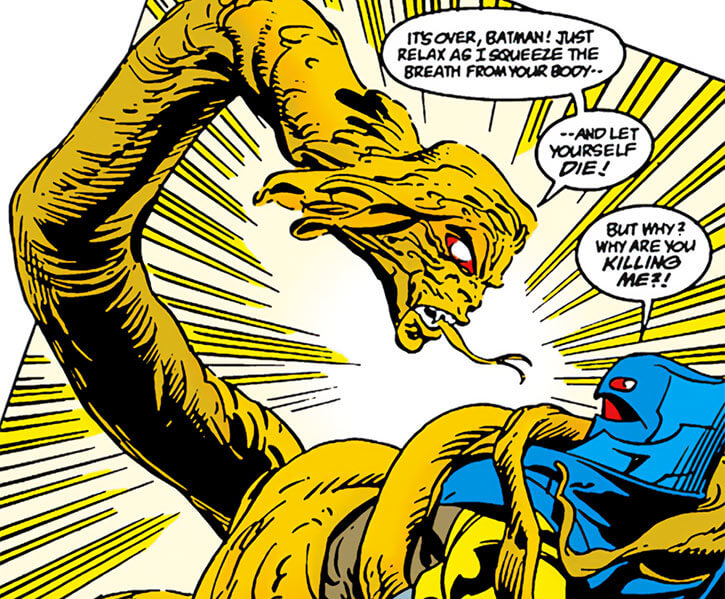 Fuller recovered just as Payne did. Dazed, betrayed and about to be attacked by Payne, Fuller had a small breakdown.

Empathising, Payne comforted her – which made him much more psychologically stable.

The pair dropped the Mud Pack plot to start a relationship.

Since Payne needed to hide, they lived in a cave deep in the forest (the New Jersey Pinelands ?  ).

They happily spent months there, foraging for — or stealing — food and supplies. 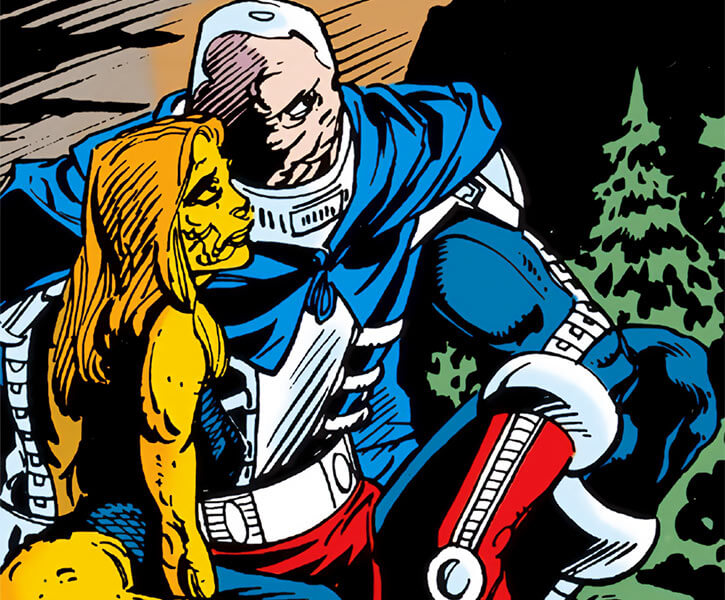 However, Preston still needed to kill people to alleviate the pain from his conditions. Resuming killing meant heat for the couple. And besides, they wanted to leave that behind them.

Sondra stole books so Preston could conduct another round of research to cure himself. But it didn’t work. Preston had to keep murdering.

The couple couldn’t touch, due to Preston’s corrosive skin. But he still impregnated Sondra – presumably after designing an insemination process.

The pregnancy went to term correctly. Though his parents had hoped for a child with a normal physiology, little Cassius was born a Clayface.

(Yes, the name was an allusion to Cassius Clay. Heh, at least the joke’s discreet. It also determined the kid’s gender, since physiologically he doesn’t have a set sex.)

My feelings for you, have always been real

Ms. Fuller taught her son to morph as an infant – before he could even walk. Cassius could adopt a convincing, age-appropriate human form. He also could manifest powers, drawing from both his parents — and more.

In 1995, serial killer Abattoir (Arnold Etchinson) stumbled upon the clays’ cave home. He had been running through the forest while fleeing from Batman (Jean-Paul Valley).

Abattoir kidnapped the baby, to force the parents to abduct his relatives. Furthermore, Ms. Fuller was sent to kill Batman.

Clayface may have won – but she twice hesitated to strike a killing blow. Batman took her down with a tranquiliser. As she lost consciousness, Fuller begged Valley to save her baby.

Batman did save Cassius, and prevented Payne from killing Etchinson in revenge. Both Clayfaces were arrested, and Cassius placed in custody.

My feelings for you, have always been real

Cassius Payne was transferred to a DEO lab to study his powers.

Of course, things went badly. Separated from his parents, the kid would eventually become a new, villainous Clayface.

As of this writing, Sondra Fuller was last seen in 2005. She was held in an extreme security S.T.A.R. Labs facility. Hush (Thomas Elliot) had Clayface (Johnathan Williams) impersonate a guard serving her food, to get DNA samples from her drinking glass. 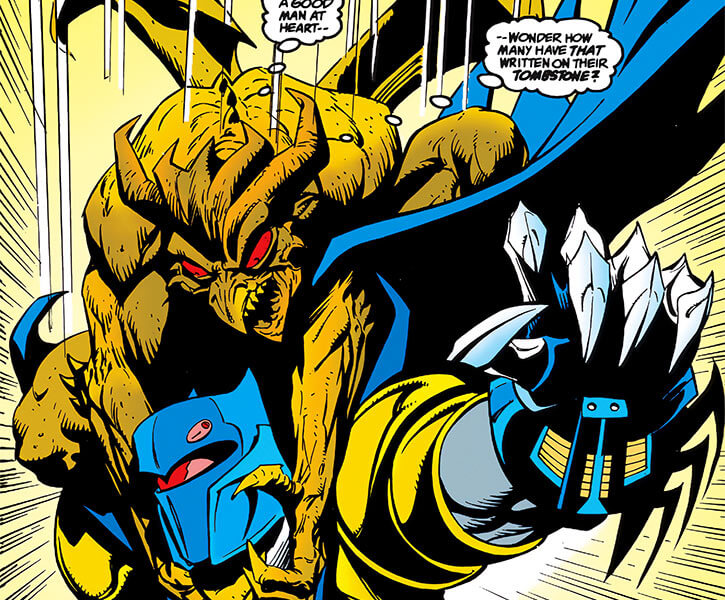 Originally, Clayface maintained human-looking eyes and hair. She eventually gave up, with her “hair” being drapes of mud and her eyes being a solid, burning red.

She mostly operated in her naked mud form. But by the 1990s she started wearing a one-piece swimsuit. 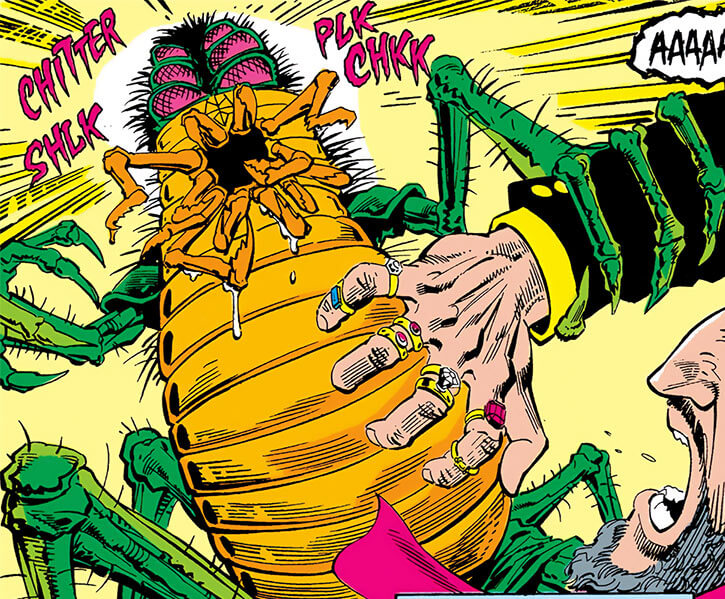 Her name is mud

Ms. Fuller came to realise that forever impersonating others was damaging her sanity.

She therefore came to crave a form of acceptance – a life where she could be herself despite her peculiar appearance. This likely meant living with other freaks, with a Todd Browning vibe.

Early on, Fuller chiefly saw Payne as a dangerous psycho. But she soon came to care for him. She felt responsible for dragging him into Karlo’s plot.

She also understood that the hapless Payne needed a caretaker, and shared her vital need for affection.

After settling with Clayface, Clayface left her past behind. She just wanted to be with her husband and raise their child.

She even lost her stomach for killing. She did not want to be an actively bad person, for her son’s sake.

By this point she came across as an ordinary, blue-collar woman. Albeit a tough one with a heavy criminal past. 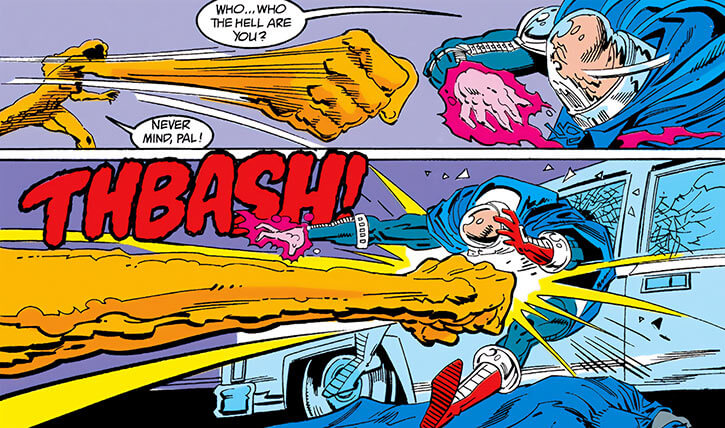 “It was a job, redhead. No need to take it personally…”

“I got as much reason as you for wantin’ revenge on the Batman — but we play it strictly accordin’ to plan ! Capeesh ?”

“I’ve had enough of this Mud Pack crud. Since Kobra changed me, it’s been the same — people promisin’ me the world, an’ endin’ up by rippin’ me off !” 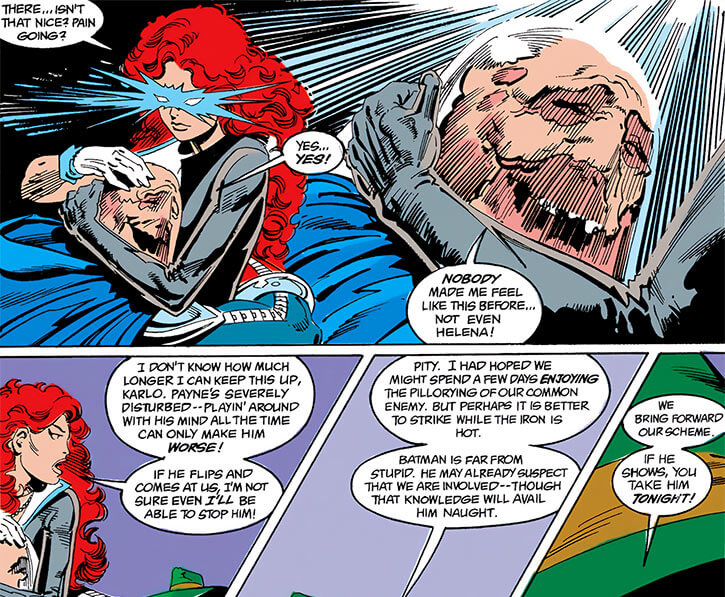 Powers (all these require Looker’s form):

Dependents (Her husband and son, 0 pts). 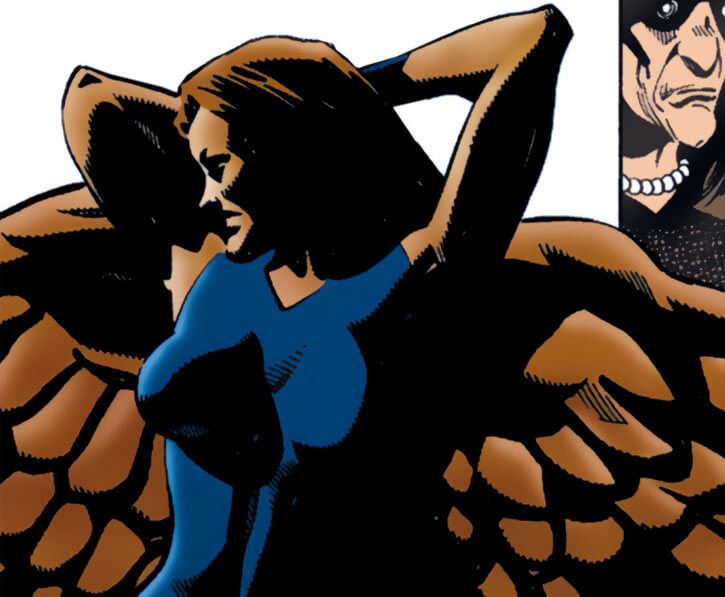 Technically she has Strange Appearance, but in practice it’s a non-issue.

Technically her EV and Stretching could be rolled under a Shape Change imaginary animal. But it’s iffy and I’m looking for clear notation, not saving points.

Minimal Marginal fees represent her slight reluctance to be something other than herself. It’s not a big deal, but this tiny cost helps model her 1989 behaviour.

I don’t think she ever demonstrated Fluid Form. She probably has a few APs of it, but it’s not shown.

Clayface Four is exceptionally versatile. There are four tiers in her mimicry abilities :

This is what she does when impersonating Robin (Jason Todd) or the rich and famous.

One assumes that she looks at the photo to morph into a lookalike, in any case. So Animate Image fits organically.

A typical use is to use her APs to mimic DEX, then germane Skills such as Acrobatics and Martial Artist. Such as Robin’s or Batman’s, though being a Batman duplicate isn’t more powerful than being a Robin duplicate.

We can *imagine* that she also duplicated APs of, say, Artist (Singer) when impersonating celebrities.

Used to do animals — usually large ones — and the occasional monster.

This is more powerful due to Shape Change’s additive APs mechanics. And more of a brute force approach to get solid APs of STR, Flight, Self-Link (Snare), Growth…

Clayface tends to use this for mobility. Either flight as a bird, or to get herself out of a bind.

It’s also her go-to Power to Grapple or Wrestle, usually as a serpentine chimera. 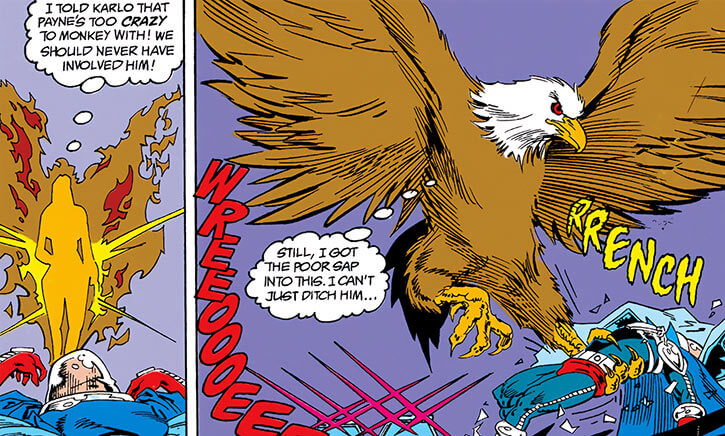 Apparently only for psionic stuff. APs are high, but remember that what she gets is RAPs – and these are capped to the APs of the original.

*In practice*, just use the listed Looker Powers and ignore her own Mimic Power. The Mimic Power would only come into play if she decided to mimic another mentalist.

In the comics she only ever used that Power once, to Mimic Looker. Having it become a major Hero Points investment to make the Powers her own helps explain why she doesn’t run out copying every psychic power in town.

Clayface can’t use Looker’s full telepathic Powers. Notably, the mind probe and mind control stuff is watered down to something that matches the three Charisma Subskills.

The “requires using Chameleon to take the original’s exact form” is a valid Limitation on its own. Especially since it means she can’t use her other abilities if she’s using Looker’s.

But I’d also consider it’s worth a small cost break on the Character Advancement front. Considering that each ability being “learned” has a -1 FC Limitation (keyed to a specific Chameleon form) might work.