Claymore was a heavy weapons and demolition specialist in Dane’s Team 7 before receiving his symbiote.

Once more, the symbiote over enhanced its host true nature. As Claymore was more concerned about the welfare of his team than of himself, his symbiote made him the link between all the other symbiotes. He can now control and combine all wetworks symbiote to work with better efficiency.

Claymore was the first to receive his symbiote. When T7 was infiltrating the Vampire enclave in the Balkans, Persephone had already cleansed the place. She was foolowing the Blood Queen orders and was waiting for Dane and his men to show up.

When Claymore approached the symbiotes’ tanks, she punctured the glass. The symbiote jumped on him. After recovering from the surprise, T7 were assaulted by the remnant of the former defenders, and Claymore showed the extent of the symbiote’s capabilities. That’s how Dane was able to decide that using all the symbiotes was the only way to get out of the cave.

During a confrontation with Drakken, the Vampire Nation’s throne’s usurper, Claymore was hit by a vial of specifically designed poison. It was tailor-made to affect the symbiote, and thus put its host into unexplained coma. As Drakken designed the symbiotes in the first place, he, or his scientist, knew how to do it.

When Drakken made his final move in Phoenix and managed to capture the entire team. Dozer was then used as a huge antennae to broadcast Drakken’s power. Seeing how his big buddy suffered, and understanding there was no other solution to save everybody around, he sacrificed himself, and Dozer, to put an end to Drakken’s schemes.

He usually fights bare chest, like many (indeed all) Wetworks male members.

Clayton Maure has always been dedicated to the team he was part of. It was true with Team 7, it’s even more true now that they are on the run.

He’s particularly close to Jester, which made him even more concerned when they learn of Jester’s “dead” state.

Drawbacks:
SIH (IO), Minor Rage (goes to Serious even Catastrophic if the team is threatened). 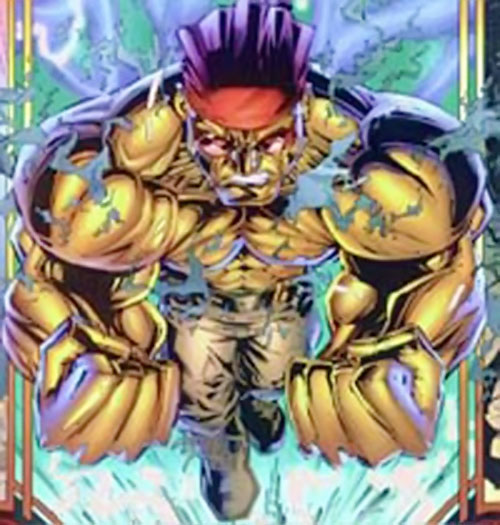