Clem is our *friend*.

More specifically, he’s a minor character in the Warframe video game. If you’re not familiar with that, you should first hit our Warframe setting article for a primer.

Clem originally appeared in nonsensical fan drawings by one Datareaper. The studio eventually added Clem to the game – as an absurd but oddly endearing ally.

Clem is a Grineer clone trooper. As such, he’s a minor super-soldier.

Clem isn’t on the level of a warframe, but he’s something of an action hero. He also seems to be a capable operative.

Clem has a number of mutations. This is common among Grineer troops. The cloning technology is in poor shape, and current Grineers are copies of copies of copies etc. ad nauseamA thing repeated so often you become sick of it..

Normally, Lancers are armed with a Grakata assault rifle. However, Clem *dual-wields* Grakatas. The version he uses is smaller, but not that much.

He can go through *thousands* of bullets in a gunfight. 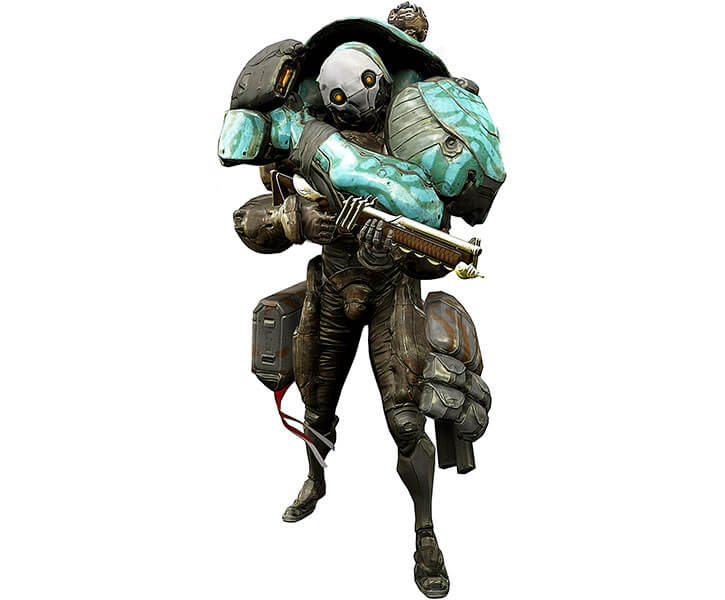 Clem, not being genetically loyal to the Twin Orokin Queens, was considered an abomination.

He managed to flee, and tried to create a life for himself in the Origin System.

Since all he could do was soldiering, he became a mercenary.

Darvo is a shady merchant. He deals in “alternatively procured” goods that just fell off an orbiter and heh, he happened to find them okay ?

Despite his shifty dealings, Darvo is firmly aligned with the Tenno. The Lotus thus considers him a valuable asset. Which means that when Darvo gets into trouble, The Lotus will likely send in a fearsome commando of warframes to bail him out.

Darvo cultivates this relationship by offering constant deals, free surplus resources, access to an amazing selection of weapons, etc.. Much of this stuff is stolen for him by hand-picked mercenaries, with Clem being Darvo’s best muscle.

As Darvo kept proving his value to The Lotus, he came to offer paid contracts for Tenno warframes to operate along Clem when he’s over his head.

Clem makes clumsy attempts to affirm some individuality in his appearance, but it’s… odd.

He wears two lancer masks atop one another, the top one being slightly askew.

There’s also a seeker grenade glued atop the back of his armour. One gets the vague impression that it’s meant as a sort of pet rock.

When not expecting combat, Clem usually carries a Latron semi-automatic precision rifle. Apparently, it was a gift.

Clem is an eager, courageous fighter – though he might be a bit reckless.

This silly character only ever says two words — “Clem !” and “Grakata !” — over and over. But the delivery is funny, making this goofball sound endearing.

And though this may not be intended, it… actually makes sense.

(Out-of-universe, “klem” is the result of the sound filters used for Grineer speech. It’s the word “them” getting deformed by that algorithm.)

On one hand, it’s only 45 seconds. On the other, Clem only ever says two words.

I *think* that the voice actor is Erich Preston, one of the game’s sound designers. The game started as a scrappy, low-budget thing. And thus, many of the early characters are simply voiced by the staff (devs, PR team, some random intern wearing a chulo, etc.).

Exile (Involuntary). Clem also presumably has a number of medical issues due to bad cloning and mutations.