Cleo Starr is a skilled, subtle and very attractive agent. She’s an excellent driver and martial artist, and seems to also be a capable leader, manager and businesswoman.

Her orange, sexy 1960s sports car can deploy a smoke screen from the exhaust pipe.

One night in a very, very pre-Crisis Gotham, the Batman was the guest of honour of a TV show about marriage. He was widely seen as Gotham’s most eligible bachelor.

An unnamed crime boss seized the occasion. As the show was moving from one ritzy location to the next, he held up each spot Batman had just departed. The show was live, so the Batman couldn’t be both on TV and on patrol. His crew made a fortune during that night. Therefore, the devious crime boss started scheming to have this occur again.

His Machiavellian plan was to get Batman married. This would certainly put an end to his nightly crimefighting patrols. He put his most subtle agent, a woman named Cleo Starr, and a million dollar budget on the operation.

Starr hired an expensive ad agency to create a media storm. Soon the town was deluged with messages about W.E.B. – Women to End Bat-chlerhood. This popular women’s movement plotted and demonstrated so they could get Batman and persuade him to marry one of them.

Batman and Robin were hounded everywhere by mobilised bands of unmarried female demonstrators. And Cleo Starr, as a super-glamorous blonde in a killer sports car, kept intervening to bail them out of the amorous hordes. She kept acting as a proud, strong amazon, not interested in the least in Batman and fiercely independent.

As the one woman in Gotham who wasn’t interested in the Batman, she of course caught his attention. Her plan to have him fall in love with her and marry him was well on its way to working.

However, Starr herself fell in love with the Batman. Thus, when the Batman crossed paths with the crime boss, she chose to fight alongside him. The Batman reluctantly arrested her as she confessed her love. He admitted that he was attracted toward her – but couldn’t consider a relationship with a criminal.

I don’t think the faaaaaabulous Cleo Starr has been seen since. Which is a shame.

See illustration. This just *has* to be the ultimate 1969 minidress.

A slick, smart operator. She has a forceful, highly charming personality and is something of a late 1960s comic book feminist. And she has feminine wiles in spades, too ! …whatever those are.

“Get your grasping, clutching claws off this poor, helpless male ! You should be ashamed of yourselves for trying to achieve by force what you can’t gain by feminine wiles !”

“Yes, gentlemen, W.E.B.- Women to End Bat-chelorhood ! We are a non-profit… altruistic… group of unmarried women who wish to remove the one barrier to happy marriage in Gotham ! The symbol of *all* single male eligibles – Batman ! The most eligible bat-chelor in town !” 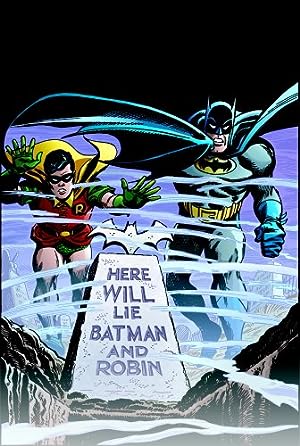 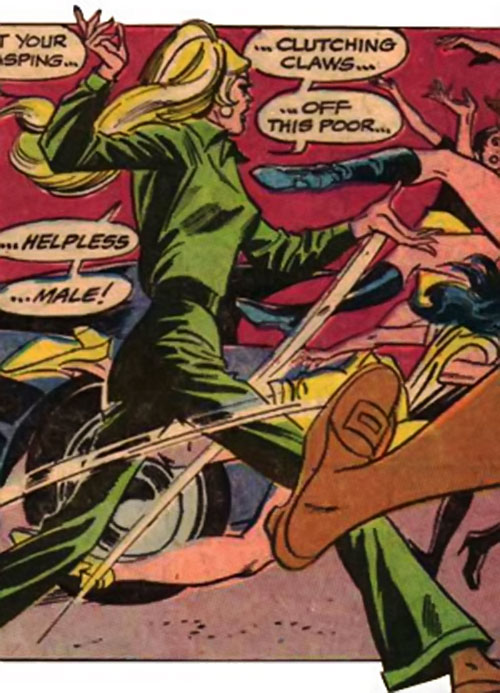 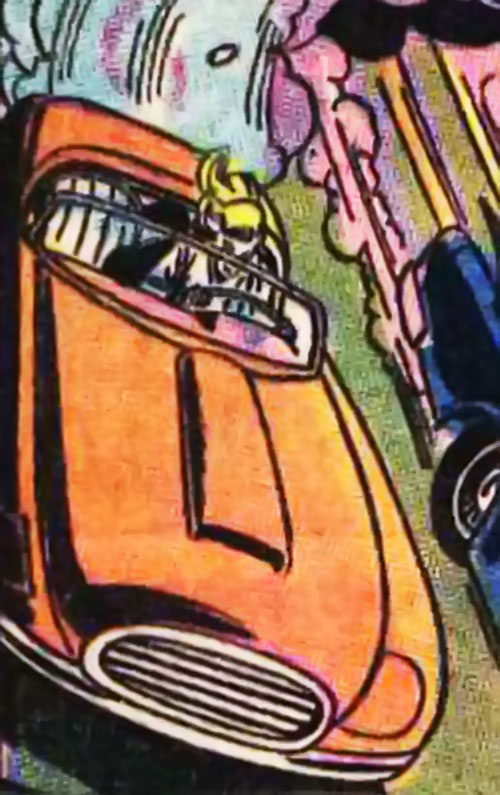