Cliff Steele is a skilled adventurer, an excellent driver and pilot and a nice, perceptive person.

Only problem is, all that was left of him was a brain. And even that was ultimately destroyed : Cliff now only exists as data, a ghostcomp .

In both these states, Mr. Steele has been installed into a series of humanoid robotic bodies. These bodies had superhuman strength and a few minor abilities to allow Steele to operate in the field. For more details, you should peruse the game stats below.

While he’s now a program, Steele finds that existing as just data without perception is unbearable. Barring force majeure, he thus continue to operate as a robot with a human soul.

Cliff Steele, formerly known as Robotman II, is a miracle of cybernetic and robotic engineering. His mind is housed in a metallic body that allows him to function in the world yet keeps him eternally removed from it.

As a young man, Steele was a daredevil known across the globe for his happy-go-lucky attitude and nerves of steel. There was no challenge he refused to face and no thrill too frightening to enjoy. His career as an adventurer was ended during an auto race, when an oil slick sent his car into a wall.

The resultant explosion consumed nearly his entire body, leaving only his brain intact.

Renowned genius Dr. Niles Caulder volunteered his services. He managed to successfully transfer Steele’s brain into an all-metal body crafted by the master of robotics, Dr. Will Magnus.

When Steel awakened after the operation and discovered what had been done to him, he snapped. Swearing that he would rather have died than have been turned into a freak, he went on a destructive rampage, intent on killing Caulder. Instead, Caulder convinced Cliff Steele — or “Robotman” — that he should use the superhuman powers of the robot body in the cause of good.

Swayed by two fellow freaks — Negative Man, whose body contained a weird, radioactive alien life force, and Elasti-Girl, who could change her size at will — Steele joined Caulder’s new team of super-heroes. They called themselves the Doom Patrol.

As field leader reporting to the wheelchair-bound Caulder, Robotman led the Doom Patrol on numerous missions. His newfound anger gradually subsided as he became more accepting of his new form. In the original Doom Patrol’s final case, the team was thought destroyed in an explosion, sacrificing their lives to save a minuscule fishing village.

Robotman’s mangled and barely conscious body eventually washed ashore. Dr. Magnus, who had since refined his art with the creation of the Metal Men, repaired and upgraded Steele’s body.

Reality’s gone. Who you gonna call ?

Steele decided to forego superheroics and mourn his friends. However, he was brought out of retirement by a new Doom Patrol organized by a woman claiming to be Caulder’s widow. Steele joined that short-lived team until it disbanded. He then went into service a third time when evidence was unearthed that led to the discovery of the still-living Negative Man.

Eventually, Niles Caulder resurfaced as well. He talked Steele into staying on as the core of yet another version of the Doom Patrol.

The third Patrol was particularly successful. It specialised in weird and metaphysical crisis situations. It managed to save the world, or large parts of it, several times.

Steele was partnered with Rebis – a more evolved version of the Negative Man, who had turned into an androgynous alchemically perfect being. The third member was Crazy Jane, a mental patient with multiple superhuman personalities.

Steel spend much time with Crazy Jane and managed to establish a rapport with her. He greatly helped her stabilise her fractured psyche. However, like the previous ones, this Doom Patrol ended in disaster.

Steele discovered that Caulder had been behind everything all along. It all had been a grand experiment in the mathematical notion of a catastrophe. Caulder, slightly insane, had been working on defining catastrophes that could give rise to better situations in their wake. Thus, he was going to devastate the Earth, his equations affirming that it would be for the better after the recovery.

The Doom Patrol were small-scale experiments using this maths. Among other things Caulder had engineered Steele’s car crash decades before.

During the clash with the Chief, Steele’s organic brain was destroyed. But his consciousness was transferred on a special hard drive. Cliff survived a harrowing ordeal – being transferred in a computer system in complete sensory deprivation. He more or less dealt with the fact that he was now just code and thus even less conventionally human than before.

With the latest Robotman body, Cliff is fond of wearing white T-shirts with older rock or punk slogans. Those have included “New World Order”, “Industrial Strength” and “Tune In, Turn On, Drop Dead”.

Cliff is a nice, simple guy thrust into a endless succession of weird and horrible situations. And it’s not easy coping with those. He’s the straight man of the team, and generally has difficulties understanding the situation, unlike the preternaturally intuitive Rebis and Crazy Jane.

Although he often protest that nothing makes sense, he rarely fails to act in a direct, useful manner, whether in or out of combat. This makes him the linchpin of the team.

Asides from being a normal guy trying his best to act heroic in semi-incomprehensible situations, Cliff is also a badly torn soul. He’s no longer human, all of his sensations are wrong and his whole existence is the result of a terrible manipulation and treason.

Although he seems more adjusted now (mostly thanks to helping Crazy Jane stabilise her own psyche), he sometimes has bad depressive and schizophrenic episodes. He can be driven over the thin edge by the feeling of ghost limbs, sexual mores or biological urges such as wanting to defecate.

His bitterness and despair are no longer crippling. But he’s had a few paranoid fugues for a time, believing that the entire world was a lie built by machines. Despite these serious problems Cliff keeps pulling himself together and soldiers on to do the right thing and be a hero.

Cliff is not comfortable with his own heroism. When others comment on how human and brave he can be, he feels awkward and shrug it off with a “yeah, yeah, I’m a swell guy” comment. The Chief stated that before his accident Steele was basically a rich bastard and a spoiled, egocentric playboy – and that the catastrophe actually made him a much greater human being.

“I’m more experienced than you think.”

Crazy Jane : “And Black Anis says you’re the only man she doesn’t want to castrate.”
Cliff Steele : “Tell her she’d be too late anyway”.

Bonuses and Limitations:
The Self-Link denotes that Cliff is at this point a computer program.

Robotman II used several robot bodies to house his brain and, later, his code. None of those had the Hardened Defenses advantage, and one RAP is sufficient to seriously damage them (often by ripping off a limb).

A superhumanly strong humanoid robot body with magnetic soles and a self-repairing system, plus a chest camera used by the Chief to monitor the team while it was in action. The Chief had a number of bodies in reserve since replacing the damaged ones was a frequent necessity.

A traditional Robotman body was crushed from the waist down and repaired by aliens who had no notion of how a human body was supposed to look. They tried what they saw as the most logical approach, and Steele now had eight spider-like metallic legs under his torso. The aliens added two force projectors on his shoulders, and each leg had a laser canon mounted on it.

After he got back to Earth Cliff elected to slip into something a bit more comfortable – the octopodal body was more powerful but he apparently thought it was creepy and went back to a conventional robot body.

This body was improved by Will Magnus, who wanted to do something about Cliff’s psychological problems and felt that improving the resolution of his perceptions and movements would help. Thus, this was the next generation Robotman unit. Asides from its remarkably sophisticated (but still high-human level) senses, this body had two unprecedented features.

It had an actual weapon system (an energy canon deployed from within the right forearm) that could affect ectoplasmic and out-of-phase matter, and a sophisticated responsometer-like system as an onboard computer. However, the human-like senses and responsometer birthed a conscience within the robot and gave rise to an interesting quandary as to whether conscience can exist without perception and if perception determines conscience.

The body was destroyed shortly after that incident.

After the explosion that concluded the Magnus-built black-body-with-human-senses experiment, the Chief tried to prove that he could do better and and built a new Robotman body. While the human-like senses were not as keen, it had an improved visual spectrum and, true to the Chief’s vision of Cliff as a weapon, it was sturdier and stronger. The Chief gave it an heavy, industrial look to better reflect Cliff’s tastes in clothing – apparently to Cliff’s satisfaction.

The body included a new gadget : a control panel in the left forearm that allowed Cliff to regulate the influx of chemicals in the nutrient bath housing his brain. Cliff used it once to resist an hallucinogenic effect used by Mister Nobody (Iron will). This body is still used by Cliff, but the last gadget is now useless.

Helper(s): William C. Wendell, Jeff Baker, John Colagioia, Darci. Much of the history section is originally from DC’s Who’s Who (loose leaves format) but it got rebuilt. 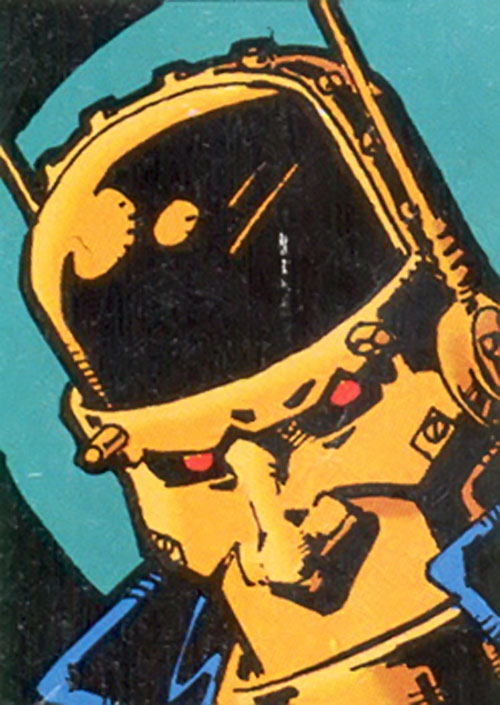 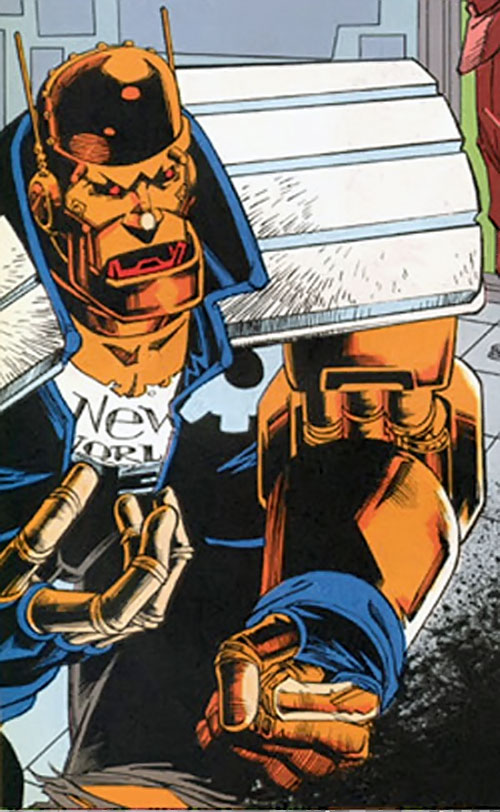 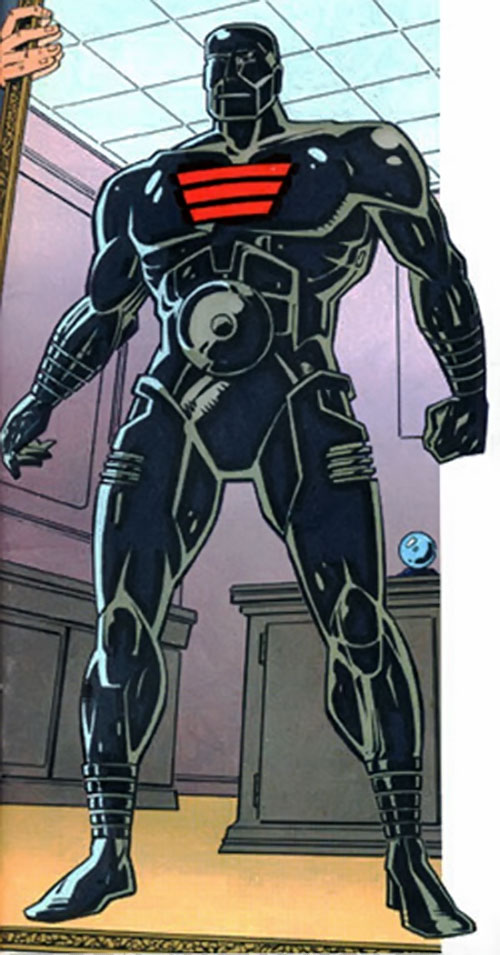 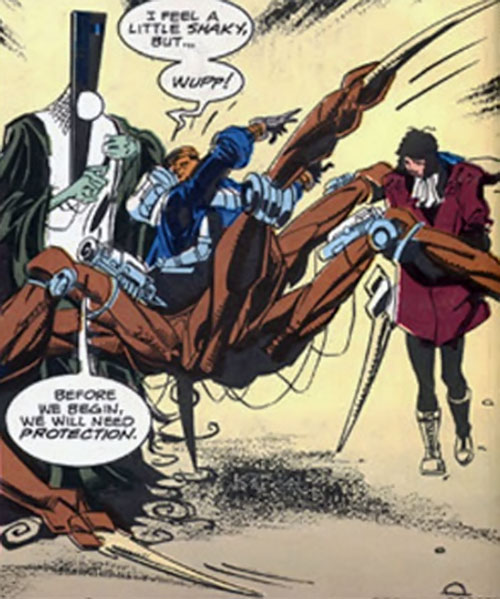 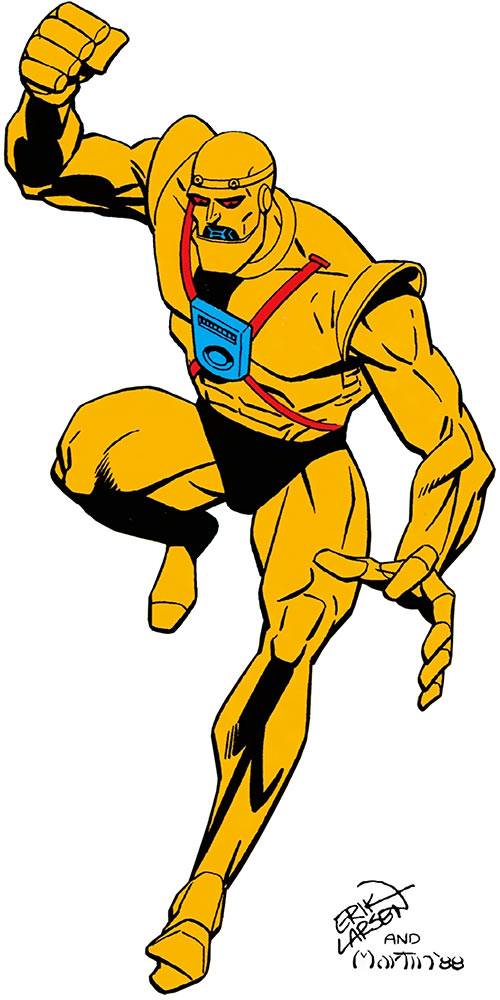