Pale Rider is a western movie from 1985, by and starring Clint Eastwood. It is a classic and very highly-regarded.

The story is simple – a mysterious wandering preacher stumbles into a broiling conflict over mining turf.

Who was that tall, gaunt man ?

There has been a fair bit of speculation as to who the Pale Rider is, fuelled by some cryptic comments by Clint Eastwood.

My take is that he *is* the Stranger (from the movie High Plains Drifter), and that he somehow came back after his death, becoming a (likely self-proclaimed) pastor and taking on a mission of justice.

The latter part come from the enigmatic statement from Eastwood that the Rider was “an out-and-out ghost” — when watching the movie with this in mind there are various clues that the Rider is, indeed, dead.

Some would go the next step and say he’s also the same person as the Man With No Name from the famous Sergio Leone old west movies. There are no clues to this (unlike the links between the Stranger and the Preacher), but having an unified “Old West Eastwood Iconic Character” would be cool.

The Pale Rider is a skilled combatant. He can casually defeat four thugs in melee combat with bats.

He is an exceptional sharpshooter and gunfighter — easily shooting guns out of men’s hands.

Around 1870, a man called Lahood discovered a gold vein in California which made him very rich. He expanded from there, buying claims from miners and then using his money to buy water cannons and force-mine the area.

The miners owning the nearby Carbon Canyon, however, resisted his offers, wanting to strike it rich despite the mediocre results that had been encountered so far.

After a journey to Sacramento, Lahood became more motivated than ever to get Carbon Canyon. The other mines were getting empty, and the government of California was considering outlawing water cannons for mining.

Lahood, hearing that the arrival of a pastor had given a whole new hope to the independent miners, briefly considered having him killed. But he realized he would just create a martyr. He then invited him to a meeting and tried to bribe him, to no avail.

His patience gone, Lahood decided to hire a mercenary “sheriff”, Stockburn. He and his men were to kill the reverend and the miners. The preacher icily negotiated with him, displaying a precise knowledge of who Stockburn and his men were and how much they cost.

He convinced Lahood to make an higher offer than anything he previously had considered — $1,000 per person to leave immediately.

The pastor relayed the offer to the miners. But they eventually declined, thinking that the offer was too good and that it meant Carbon Canyon was worth far more. They also thought, as the pastor was silently watching, that their lives were not for sale and could not be bought.

As Lahood telegraphed Stockburn, the Preacher silently left Carbon Canyon to get a pair of revolvers he had left in storage in a nearby town.

He came back just in time to prevent Lahood’s son from raping the teenaged daughter of his host, shooting him through the hand after he persisted in trying to recover his pistol. This further angered Lahood, who described the pastor to the newly-arrived Stockburn and his six “deputies”.

Stockburn recognized the reverend from the description that was provided. It matched a man he had personally seen die (almost certainly by his hand) the preceding year.

After a miner was gunned down in town by Stockburn and his deputies, it became obvious that they would come the next day to Carbon Canyon. After saying his goodbyes, the Preacher rode into town to bring the situation to an end — alone.

The Rider’s body is marked by numerous scars. These are mostly bullet holes – including six through various vital organs in his chest and abdomen. A doctor would certainly notice that most of those wounds are not survivable given the medical technology of those days.

His eyes have a strange, burning, unsettling presence.

He does not wear the collar when he’s travelling, though he will start wearing it when he settles down in a community for a bit.

The Rider is a pleasant, helpful man. He’s quite self-confident but always has a nice word for the common people, and a ready smile.

It is almost certain however, that he’s not actually a pastor. In particular he does not seem to have actual, genuine priestly vows, he does not say Grace right and does not appear to actually know how to conduct a religious ceremony.

Although the people of Carbon Canyon instinctively respected the collar, they slowly realized he was not a real preacher. But by that point they respected him as a man.

The Rider is very confident when facing danger. He will walk into potentially deadly situations with an almost nonchalant air. The preacher handles any conflict with similar relaxation. He behaves like a man who has absolutely nothing to lose – not even his life.

He does not interfere in the decisions of others. The preacher refuses to let his considerable charisma play a role. While he’s quick to consider good people he meets to be his friends, he never settles and rides on once whatever issues he has encountered have been straightened.

(After clubbing an opponent unconscious with a wooden club) “Nothing like a good piece of hickory.”

Coy LaHood: “Do you imbibe ?”
The Preacher: “Only after 9 in the morning.”

“How much is it worth to have a clear conscience ?”

“Yeah, well, the spirit ain’t worth spit without a little exercise.”

“You’re a good man, Barret. Sarah and Megan are waiting for you.”

Powers:
Quite possibly a degree of Invulnerability (7 APs ?) that takes at least hours to work. 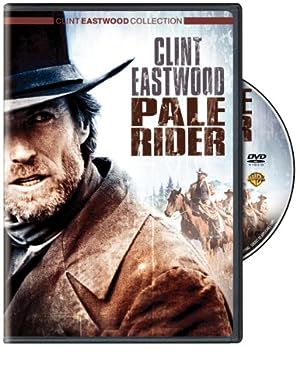 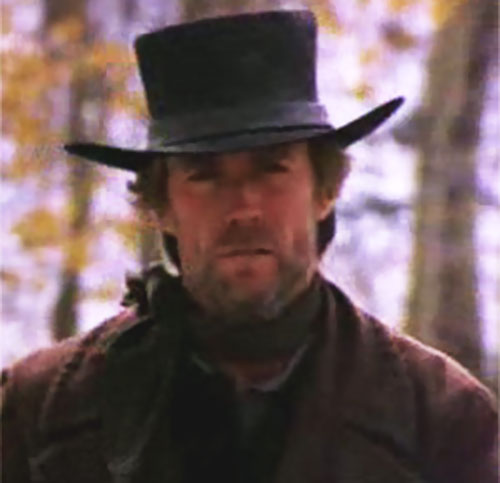 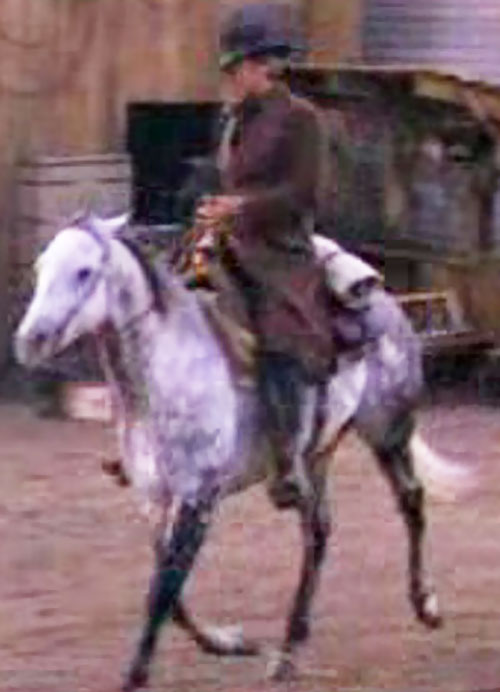 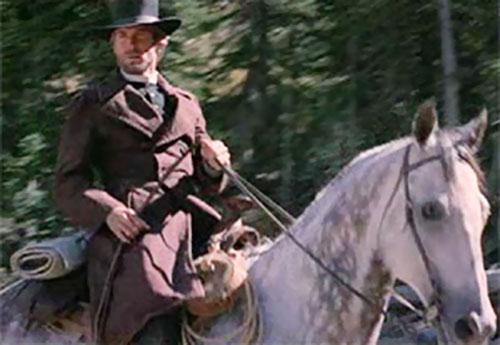 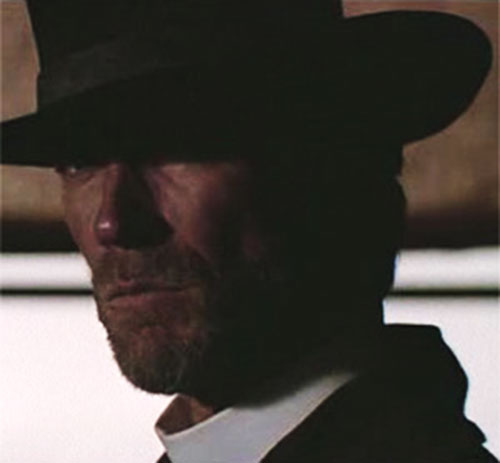 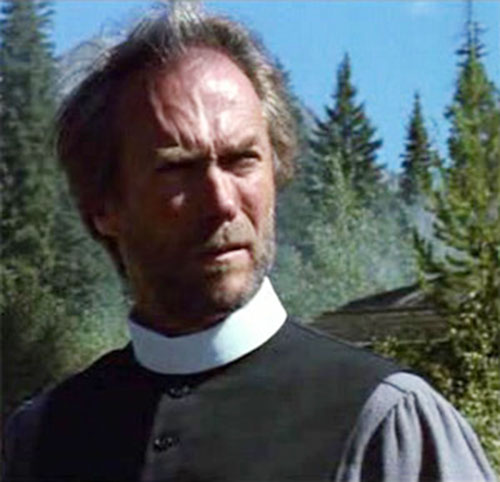 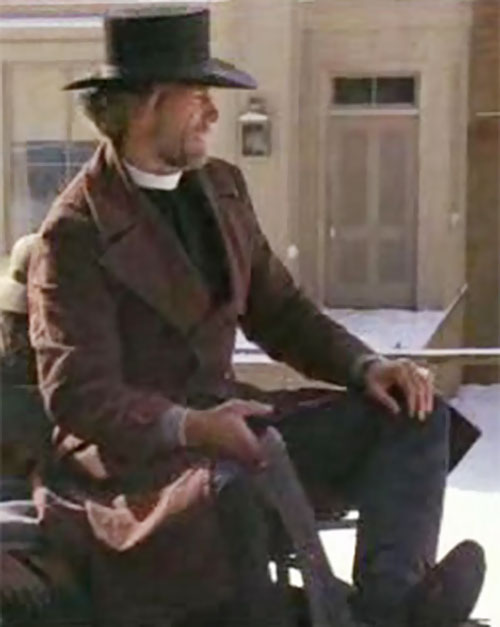 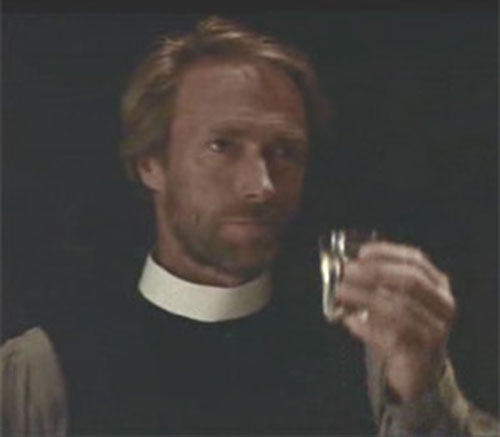