Cloak’s body is a gateway to a pocket dimension. He chose to wear an ample cloak to delimit the outer boundary of his body. Inside is pure darkness, with no substance. He thus can’t be harmed by physical weapons.

He can leak out this darkness to obscure vast volumes of space. He can extend his unsubstantial body to shroud objects and people to trap them in his inner dimension.

This pocket dimension is home of an ever hungry demon named Predator. The demon requires to feed upon the life force of individuals sent to him. Cloak can control when the demon feeds upon captives.

He can project himself in his dimension. Once inside, he can move there and exit in our real world in a totally different place of his choosing.

With Dagger, they form a symbiotic couple. She produces an overflow of inner light energy that consumes her if not expelled. He needs a constant feed of light energy to feed his demon.

Without one another, they would constantly need to kill people. Her with overpowering redemptive light, him by sucking all the life force of individuals.

Raised in a poor South Boston  neighborhood, Tyrone Johnson was a good student despite his chronic stutter, a disability he struggled to master with the support of his best friend, Billy.

When Tyrone was 17, he and Billy witnessed the robbery of a local store and the fatal shooting of its clerk. The thieves fled, and Billy ran as well, fearing that he and Tyrone might be wrongly suspected of the crime.

When a policeman ordered Billy to stop, Tyrone tried to proclaim Billy’s innocence. His stuttering made it impossible to speak clearly, and the officer shot Billy dead. Feeling responsible for Billy’s death and afraid of the police, Johnson ran away to New York City.

Death and the runaways

Arriving at Manhattan’s Port Authority Bus Terminal, a penniless Tyrone considered robbing Tandy Bowen, a rich girl who had also run away from home. Yet when someone else robbed her first, Tyrone impulsively tackled the thief and returned Tandy’s purse. The two teens became fast friends. 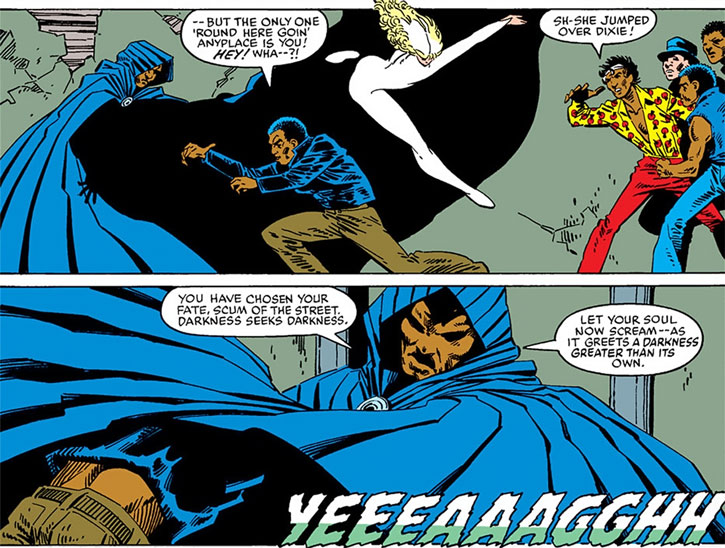 When the naïve Tandy accepted an offer of shelter from some strange men, a wary Tyrone went along to protect her. However, the 2 teens were soon forcibly delivered to criminal chemist Simon Marshall. Marshall was developing a new synthetic heroin for the Maggia. He was testing it on runaway teens with fatal results.

Johnson and Bowen somehow survived injections of the drug, and they fled. During their escape, Tyrone found himself engulfed in darkness and seized by a strange hunger which eased in the presence of Tandy. She was glowing with a brilliant light.

Trying to hide his newly shadowy appearance in a makeshift cloak, Tyrone began absorbing Marshall’s thugs into his darkness while Tandy struck them down with daggers of light. The 2 teens dubbed themselves Cloak & Dagger and declared war on drug crime.

Cloak & Dagger started out as merciless vigilantes, killing Marshall. Spider-Man tried to interfere. He saw the duo as misguided innocents and gradually became their friend. After ill-fated assassination attempts on the crime lords Silvermane and Kingpin, Dagger became less ruthless and tried to steer Cloak in a similar direction. 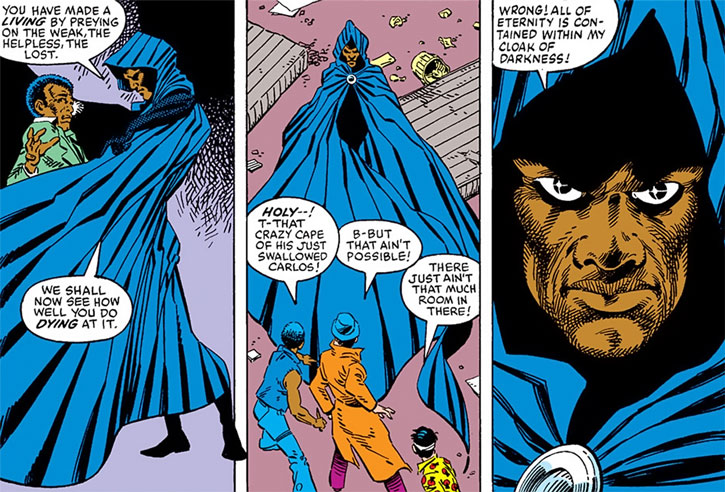 However, since his power compelled him to consume living beings, Cloak found it more difficult to follow this gentler path, even though Dagger’s light could satisfy his hunger temporarily.

Cloak & Dagger found sanctuary at the Holy Ghost Church with the sympathetic Father Francis Delgado. Over time, Delgado became romantically obsessed with Tandy. Regarding Cloak as a demonic influence, Delgado tried and failed to split up the duo. He went mad in the process.

His cloak is striped with black and dark blue. Under the hood, his face and features are visible though shadowed. Under the cloak itself, his body is non-existent, just showing a completely dark area.

Before becoming Cloak, Tyrone was shy and stuttering. He was avoiding the police forces. Seeing cops, he’d rather hide or run away.

As Cloak he’s a taller and more imposing person with a deep rumbling voice. He’s no longer afraid of cops. He’d rather show them how it feels to be helpless before someone willing to use his power.

However, his main targets are low life criminals, particularly drug pushers and pimps. When pursuing these favored preys, Cloak would not hesitate to kill them. He would kill those who drive people toward misery and crime.

He hopes Dagger’s light will redeem those who fell into misery and crime because of the firsts. He’s an implacable foe when it comes to true criminals, not those he considers their victims.

When other people stand in his ways (other heroes like Spider-Man, or regular cops) he displays much bravado, trying to intimidate them to make them bail out. He can go up to trap them and scare them in his darkness, but he would not kill them.

He has much trouble assuming the somber nature of his powers. His inner darkness slips out in his attitude. He always feels depressed and speaks fateful sentences. His powers make him scary and it’s just what he wants when he’s after criminals.

In his day to day life, he constantly curses his powers. They make him a demon. Scaring criminals is OK, but he also scares everyone else and he feels very bad about that. He also feels like he could lose control anytime and kill just anybody.

Staying around a catholic priest doesn’t make things any better. Father Delgado, obsessed by seeing Dagger as an angel of light (which she kind of is), and Cloak as a corrupting demon feeding on her divine light with gluttony (which he kind of is but without the religious innuendo).

Cloak was the constant target of his preaching, while Dagger was comforted by his appeasing words as she constantly felt bad for killing people. Things get better when Delgado is replaced by Father Michael Bowen, Dagger’s uncle.

Cloak and Dagger’s symbiosis obviously developed a particularly strong relationship between them. However, they are not lovers. One could venture that’s Cloak ghastly transformation, and Dagger’s burning radiance, makes it impossible.

“You pray FOR those who do evil ! We prey ON them ! Farewell, priest, we leave you with your prayers ! Use them to convince evil men to turn to good… In the meantime we shall practice a more definite form of persuasion !”

“You have chosen your fate, scum of the street. Darkness seeks darkness. Let your soul now scream… as it greets a darkness greater than its own.”

Scum: “Th… This is all goin’ wrong !”
Cloak: “Correction, scum… It was never right. You have made a living by preying on the weak, the helpless, the lost. We shall now see how well you do DYING at it.”

“I am shadow. I am darkness deeper than any dungeon. I am called Cloak… And I hunger.”

“There is only one law, detective, as this murderer of women and children will discover… The law of RETRIBUTION !”

Area Knowledge (Pocket Dimension) refers to the description of Dimension Travel in Blood of Heroes: Special Edition. This Advantage allows the power user to travel, with any willing target, to the dimension with an Auto Action instead of a Dice Action, as long as the distance between the departure dimension and the arrival dimension is less than the AP of power.

Cloak’s Dimension travel is limited to a personal pocket dimension. Consider this dimension to be a distance of 6 AP from the Earth dimension (in terms of Dimension travel distances as described in BoH:SE). This basic limitation lowers the power cost to BC 100.

Banishment to this pocket dimension works as described in BoH:SE. To send unwilling targets to this dimension requires a Dice action using AP of powers as AV/EV and Int/Min as OV/RV (or Bod/Bod for an inanimate object). The distance between Earth and the pocket dimension induces a +2CS OV/RV penalty to the Banishment Dice action.

If the Dice action earns at least as many RAP as the RV, the target is sent to the pocket dimension.

Sending willing targets (including himself) doesn’t require a Dice action because Cloak owns the Area Knowledge (Pocket dimension) advantage (as per BoH:SE power description under the TRAVEL chapter). Cloak’s banishment (either willing or unwilling) looks like he extends his cloak and wraps it around his targets, engulfing them in the darkness.

Once there, the targets are in the middle of nothing, in a place devoid of any feature. A pure void made of pure darkness (the equivalent of a Darkness: 06 area in all the pocket dimension).

Everybody trapped there experiences a dreadful feeling of extreme cold and despair. It gets to the very soul of those visiting the place. Their hopes and life expectancies are sucked in this vacuum, feeding Cloak’s Hunger (see below).

It’s not clear if Cloak can control whether trapped victims are drained or not. Spiritual drain might have the Always On limitation (FC-1).

As long as living people are trapped in his pocket dimension, Cloak seems unable to do any other complex action. The Area effect Spiritual drain attack takes his Dice action for the round. He must release them or drain them dead to get his dice action back. Dagger has a Miscellaneous Advantage that allows her to feed Cloak’s darkness and makes her immune to Cloak’s Spiritual drain.

Unlike the power described in BoH:SE, victims (unwilling targets) of banishment to Cloak’s pocket dimension don’t need Dimension travel to set themselves free. They need to make a Dice Action using Inf/Aur vs RAP/RAP of Cloak’s Banishment dice action.

1 RAP sends the character back to Earth. Owners of the Dimension travel power can add their AP of power to his AV/EV for this escape roll.

Targets who willingly entered the Pocket dimension may wish to escape without Cloak’s consent. They must pass the same test, using Cloak’s AP of Dimension travel as OV/RV. This limitation grants Dimension travel a base cost reduction BC-100.

This pocket dimension is normally a complete void. Anything present here was previously sent (either willingly or not) by Cloak. Thus, contrary to the power described in BoH:SE (in the SUMMONING chapter), Cloak doesn’t need a Dice action to bring anything or anyone from his pocket dimension back to Earth. He can release any trapped object or person at will for an Auto Action.

The time/distance parameters are not clear. As a rule of thumb consider he can transport as far as his AP of power in 1 phase. For longer travels, make up the travel time accordingly. This Jump Location Bonus increases Dimension travel base cost BC+100.

We can also consider that characters with powers related to Darkforce (Silhouette, Darkstar…) are not so defenseless in Cloak’s dimension. They may use AP of these powers as AV and/or EV to escape banishment from Cloak, and as OV and/or RV to resist Spiritual drain.)

Cloak constantly complains about his Hunger. He needs to feed on people’s ’light‘ (relates to people’s soul).

In game terms, this need is translated as a Gradual Loss Vulnerability. Cloak’s loses 1 AP of Spirit per day (15 AP of time) without using his Spiritual drain power.

Dagger’s light power can feed this hunger with no harm effect. (This translates as an Misc. advantage in her writeup).

It should be noted, though, that Dagger experiences a kind of consuming overflow if she didn’t use her light power on someone. This aspect is not translated in her writeup but must be kept in mind to define the symbiotic relationship between Cloak and Dagger.

Dagger dies if she doesn’t use her light power on someone. Cloak dies if he doesn’t drain light from someone. Dagger can expel her overflow to feed Cloak’s Hunger. If they split, they’ll have to constantly kill people to stay alive. 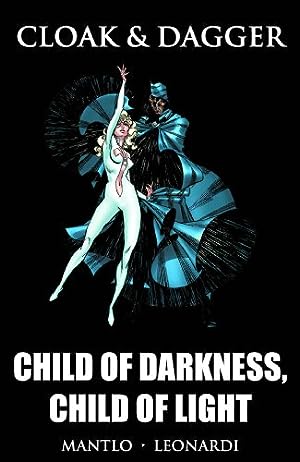 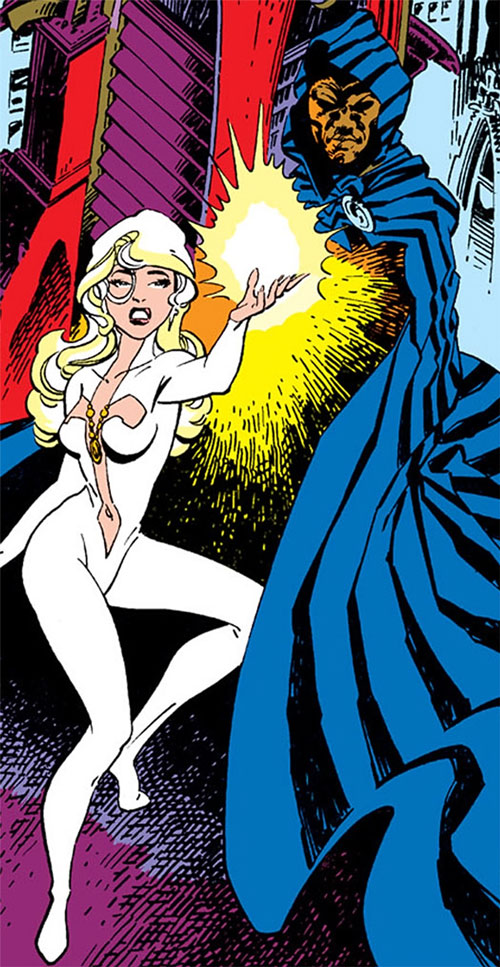 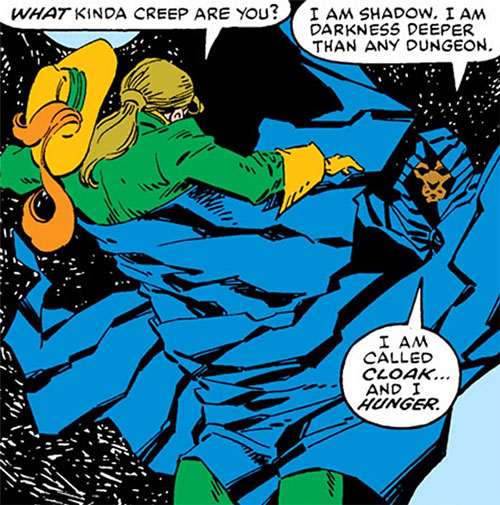 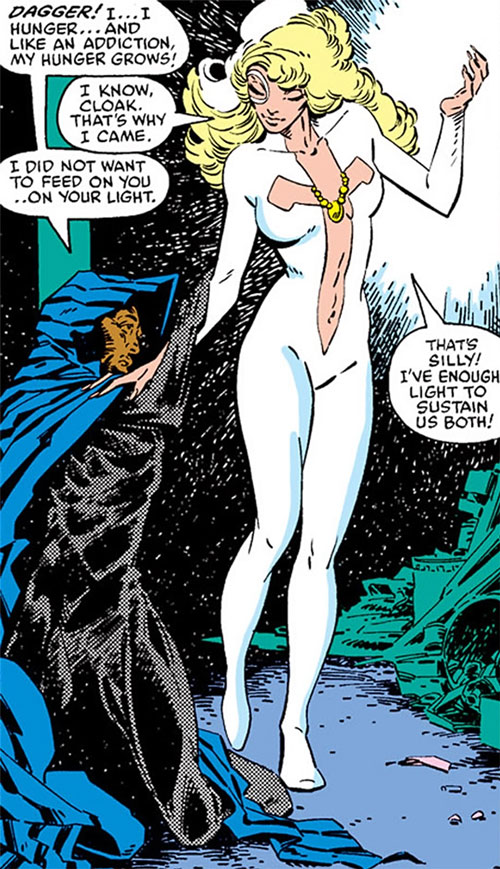 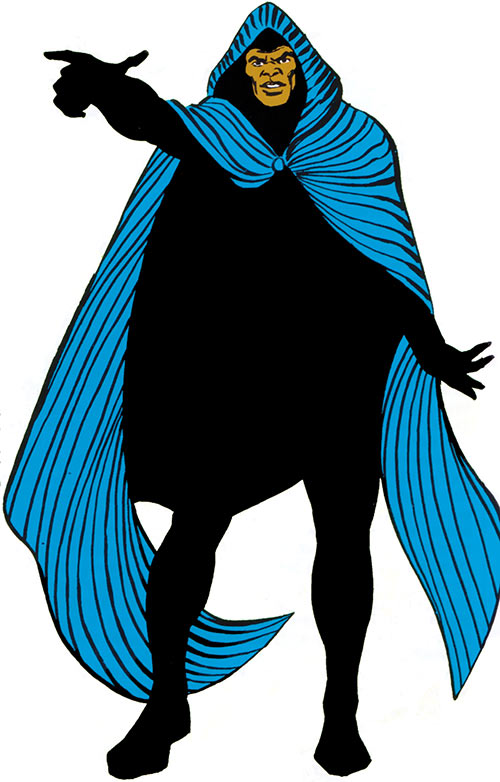 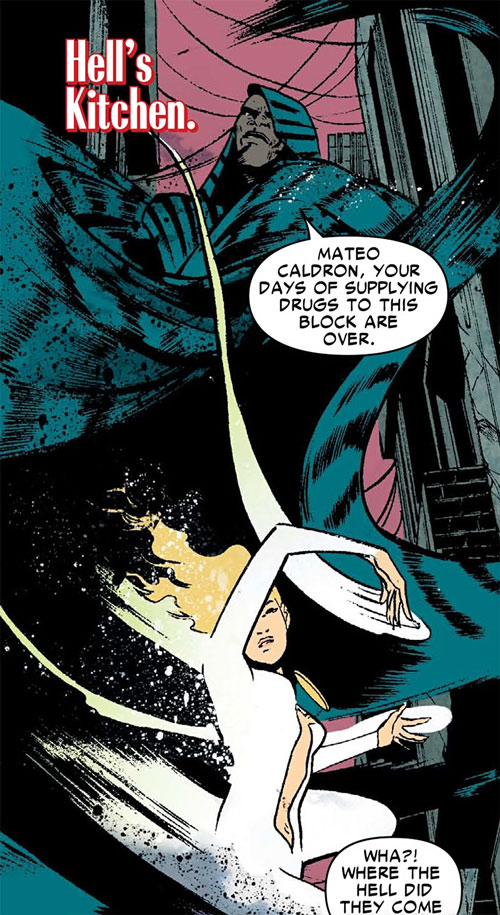 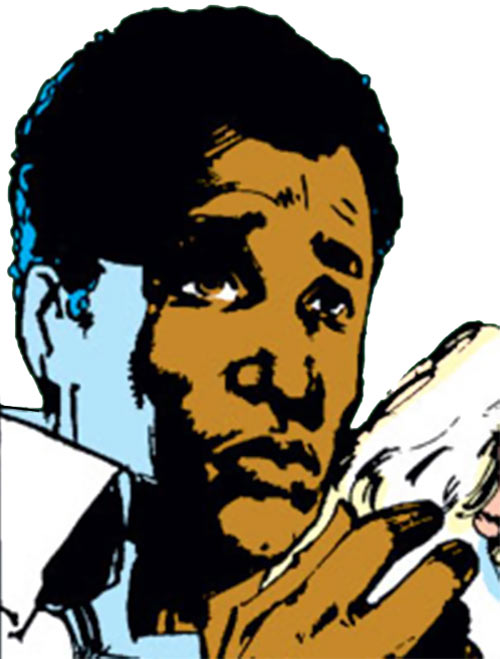