Cloak wears a suit which renders him completely invisible. He also has electro pads that can deliver a charge powerful enough to kill a person.

Skilled at moving soundlessly, Cloak is a talented assassin, whose presence is often unnoticed at a crime scene.

A Metan assassin working for the crime chief Sude, Cloak was sent to kill Captain Majan. Majan was a corrupt security officer who’d become a liability.

Infiltrating the security services headquarters, he found Majan fighting fugitive security agent Rac Shade. Taking advantage of the situation, Cloak killed Majan. He left Shade to be found over the body while he made his escape. 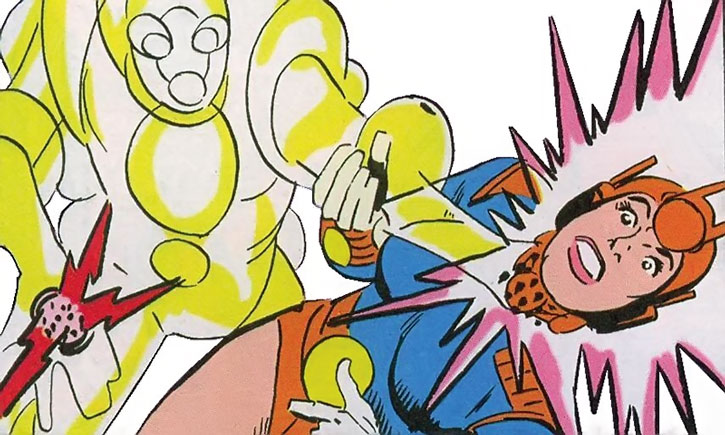 Following the collapse of Sude’s criminal empire, Cloak decided to seize a small territory for himself. He thus arranged a meeting with some lieutenants he hoped to recruit.

The meeting was interrupted by security agents Mellu Loron and Sgt. Barak, who were trying to prove Shade’s innocence.

Cloak takes an insane glee at being able to move about unseen. He is often giggling in his thoughts as he does so. Even when captured he seems unnervingly happy, and relieved to be able to laugh out loud.

This predilection doesn’t appear to hamper him. He e’s perfectly capable of moving stealthily while restricting his amusement to his thoughts, but rarely seems to take anything seriously.

He doesn’t seem to have any particular loyalty to an employer. Cloak served Sude out of fear of his power, and took jobs partly for the thrill.

[Thinking as a guard passes by] “Ha ha ! Here comes a security guard ! I feel a lot safer knowing that brave men like him are around to protect me ! Ha ha ha ! Ha ha ! He walked right by me ! If I weren’t so busy with my mission for Sude, I’d go tell him how insulted I am that he didn’t even stop to say hello to me ! Ha ha ha !”

[Thoughts] “Ha ha ! Now both of them will die, believing they were killed by nothing at all !”

[Thoughts] “He’s protected by a force field ! But now that his helmet’s off, my electro pads will fry his brains ! Isn’t that funny ? Ha ha ha !” 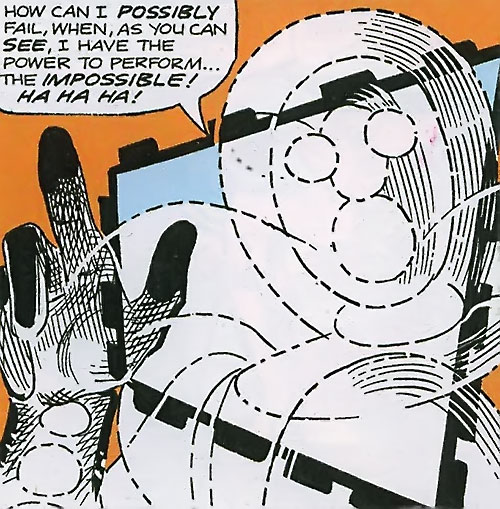