Cloudburst can fly, summon rolling black clouds in the sky and shoot lightning from his hands. The Powers listed above assume a little wiggle room and flexibility around these themes, but generally he just flies around and blasts.

See the Cadre entry for context about the New Extremists. 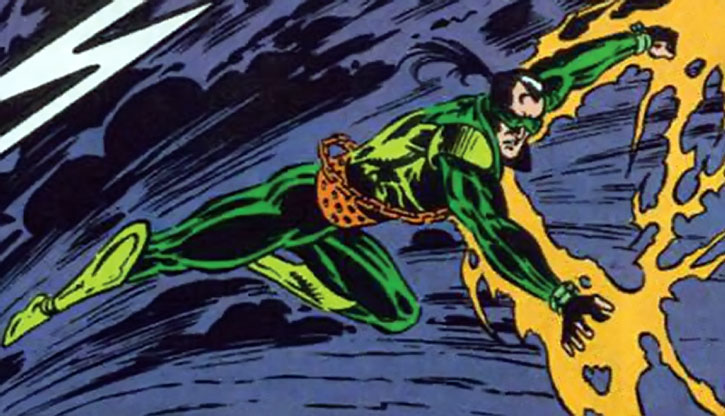 “Get ready to die, Justice League.”

“Don’t worry, it’s just a little… cloudburst between friends ! Let’s see how you stand up to a little bad weather !”

Bonuses and Limitations:
All Powers are Contingent upon Weather control.

This allowed them to credibly engage the JLA, since the League doesn’t generally spend HPs on a bunch of nobodies. But the tide turned as the New Extremists ran dry – and their more powerful opponents regrouped, started two-teaming them, shook off the Stuns, etc.

Aerial combat ● 2 points ● Descriptor: Skill
Enhanced Dodge 3, Move-by-Action (both are Limited 1 – only whilst in flight).