The Cluemaster has above-average smarts, athleticism and charisma.

He’s trained himself for speed and accuracy when throwing small projectiles. He’s fully ambidextrous with these. He can even simultaneously throw two projectiles, one in each hand, at different targets.

His costume holds a number of glass pellets and bombs he can throw. Robin once referred to him as a “walking utility belt”. Demonstrated warheads include :

In 1966, a new costumed criminal came after Batman and Robin. He had an angle. He would run thefts and leave clues for the Dynamic Duo – hence the “Cluemaster” identity. But that was a diversion.

The real plan was to tag the Batmobile with a tracer during a heist, and thus locate the Caped Crusader’s headquarters. Then Batman would be eliminated in his civilian identity. Out of costume, he would be far more vulnerable.

Furthermore, the Batman mystique would no longer apply. Cluemaster considered that Batman’s reputation played a critical role, by demoralising criminals attempting to kill the Gotham Gladiator.

And it would have worked too, if not for this meddling Aunt Harriet

However, Dick Grayson’s aunt Harriet was determined to prove that her nephew and Bruce Wayne were Robin and Batman. That was in 1966, Batman was the height of camp , these things happened.

As a result, Batman and Robin were taking extraordinary precautions to prevent being traced. 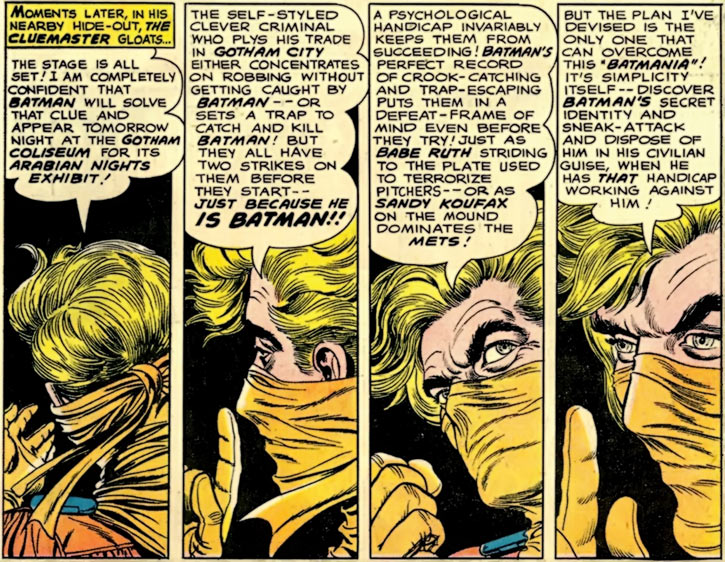 The Cluemaster’s first bank robbery went fine. He delayed Batman and Robin by hitting the Batmobile with a flash charge. He and his henchmen then escaped using gas grenades and secret passageways in a nearby abandoned building. Within the building was a painting, depicting a clue about the Cluemaster’s next crime.

The real plan was that the flash pellet had also dropped traceable, transparent radioactive paint on the Batmobile’s tyres. This would have been sufficient to find the Batcave in ordinary times. But the additional measures against Aunt Harriet coincidentally foiled this. And they then allowed the Dynamic Duo to realise the Batmobile was radioactive.

The clue looked like guards in bearskin hats. Batman & Robin didn’t realise that by flipping it upside down, it would now look like the 40 Thieves in Ali Baba, hiding in jars. Nevertheless, they simply stumbled upon the Cluemaster’s next crime, at an Arabian Nights expo.

The Dynamic Duo fell into a hidden trapdoor. There, they found a new topsy-turvy clue. But instead, they shadowed the man who was tracking down the radioactive tracer on the Batmobile. Then, they stormed the Cluemaster’s hideout and arrested him and his two henchmen.

Thus ended the main appearance of the pre-Crisis Cluemaster.

In 1968, several criminals schemed to… keep Batman alive. A West Coast syndicate was coming to Gotham. The Penguin reasoned that if they kept Batman alive against the invading made men, the Gotham Gladiator would defeat the newcomers. This would spare the local criminals a major gangland war. 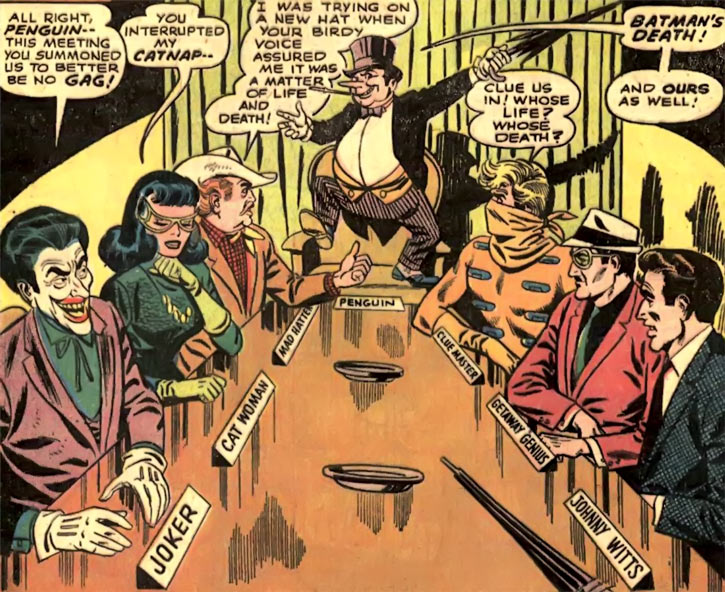 The Penguin assembled the Silver Age versions of the Joker, Catwoman, and the Mad Hatter. He also summoned C-listers – the Getaway Genius, Johnny Witts and the Cluemaster. Yes, “C” might be generous.

Yet the Penguin’s crew was quite successful. For instance, the Cluemaster prevented the Batcopter from being blown to smithereens by a cloud loaded with explosive compounds. He did so using magnetic gadgets, likely issued by the Penguin.

In 1977, the Cluemaster was among the multitudinous masters of malfeasance in attendance at the “Supreme Court of Crime”. This underworld institution was investigating who had (seemingly) murdered Batman.

But Cluemaster was just a guy in the peanut gallery.

In 1981, Cluemaster was among the dozen villains working with the Monarch of Menace. The Monarch said that he held Batman as his prisoner. And he would keep him locked up if paid a 10% cut all crimes. Cluemaster and the rest agreed to his terms.

(Batman’s dialogue implies that Cluemaster had been in prison ever since their 1966 encounter. That was presumably a continuity mistake. It also misreads sending clues as being the Cluemaster’s actual M.O., rather than a diversion. Which just makes the Cluemaster a second-rate Riddler.)

The Cluemaster sent Commissioner Gordon a latitude and a longitude, and the words “apply yourself”. Batman, who wasn’t actually imprisoned, realised that this location was where the Titanic had sunk. He found Cluemaster robbing the Titanic Appliance Center, and promptly arrested him and his gang.

The Monarch fell soon after that.

In 1986, the Cluemaster was among the throngs of Batman enemies freed by Ra’s al Ghul. However, he was simply glimpsed in the crowd.

This story (Batman #400) also takes place in the “continuity penumbra ” right after the Crisis on Infinite Earths. Like many such stories, it might be best retconned  as having happened shortly *before* the Crisis.

After the Crisis, new takes on the Cluemaster emerged. These were different characters, best covered in separate profiles.

Really, the orange Infantino -designed costume is the most memorable thing about him.

One appearance had him as a fairly cunning bloke. He also seemed to be a baseball fan with an interest in the psychological aspects of sports competition.

The other had him as a two-bit Riddler imitation. This unfortunately became the dominant take on the Cluemaster.

Drawbacks:
In one take, he may have had a SIA about sending clues to the police before committing a crime.

Since Cluemaster is such a generic Silver Age villain, it is tempting to give him cookie cutter (and thus much higher) stats for the archetype.

But I preferred to stick with the “just the facts” writeups.org approach. And so I statted what’s in the primary sources . Wherein the Cluemaster doesn’t… do much.

Interestingly, the Mayfair entry assumes that Cluemaster builds his own stuff. If you want to run with this approach, add Gadgetry: 04 and Scientist (Drawing plans): 04. Note that there isn’t any hint, pre-Crisis, that this is the case. 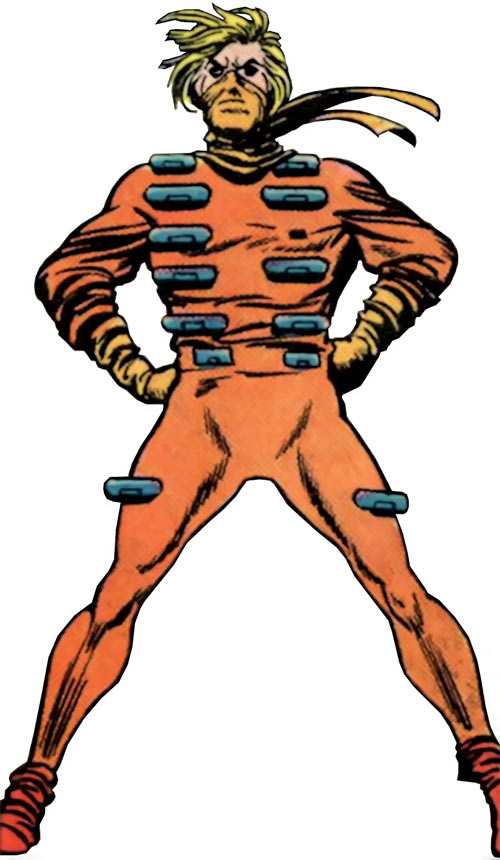