This second profile covers an era where Cluemaster primarily appears as a pathetic joke in Justice League books. Also known as the “bwa-ha-ha era” (well, that’s what *I* call it), it was a distinctive span with a specific fan following.

Thus, a writeup just for this take on Cluemaster seems reasonable. Especially since he uses a different character sheet  during that time.

The Cluemaster seems to be athletic, with above-average agility and hand-eye coordination. Nothing particularly impressive, though.

He carries a number of throwable capsules. Their chemical payload isn’t potent, but he packs a good number of them. Demonstrated loads :

The Cluemaster does very little during this era. And he certainly seems confident that any action of his will fail. As a character, he’s a complete loser.

Cluemaster was once the host of a popular daytime game show. He enjoyed the fame and affluence, particularly when it came to the flashy stuff. Y’know – white dress shoes, an array of colourful leisure suits, Las Vegas weekends, the density of pretty women associated with TV broadcasting.

Under unrevealed circumstances, the show died. The slot was preempted by old cartoon reruns. The ex-show-host then launched a boardgame called Obnoxious Pursuits, which presumably shared themes with his TV show. But that tanked.

So he became a criminal. Well, more than before.

It is possible that his subsequent excursions as Cluemaster were *loosely* comparable to pre-Crisis Earth-1 stories. But that’s by no means guaranteed. Still, one flashback does show him fighting Batman.

The bulk of Cluemaster’s career during this era took place with the Injustice League. So you should refer to our profile for that team, which has a description of their misadventures. We’ll assume that you did, OK ? OK.

After the Justice League Antarctica disaster, Cluemaster found a position writing rebuses for television game show Concentration . His colleague Big Sir was a contestant on the show, and won big.

Cluemaster only held that position for a few months. I suspect that it was found that he helped Big Sir win. But that’s a complete No-Prize Hypothesis .

When the Injustice League had to reunite to find money, Cluemaster was among the majority that voted to keep trying being “heroes”.

A Chuck to the system

A revised version of Cluemaster, written by Chuck Dixon, then appeared. It is in practice a different character, though *technically* this is the same, New Earth person.

The Giffen take on Cluemaster briefly resurfaced in 1993 (Justice League Europe #49-50). But it’s essentially a crowd scene and they likely were mind-controlled. Thus, this overlap with the Dixon era is no big deal.

Cluemaster usually has shoulder-blades-length hair. It’s frequently done in a poofy, wavy style. I gather that having a full head of flashy hair was an important asset when he was a TV show host. He seems attached to it.

He’s usually badly shaven, but he has a hanky on his face so who cares right ?

Cluemaster seems… directionless. He lives in nostalgia of his glory days as a minor TV celeb. Apparently, he considers that nothing good will ever happen again in his life. He appears unable to commit to any productive endeavour. 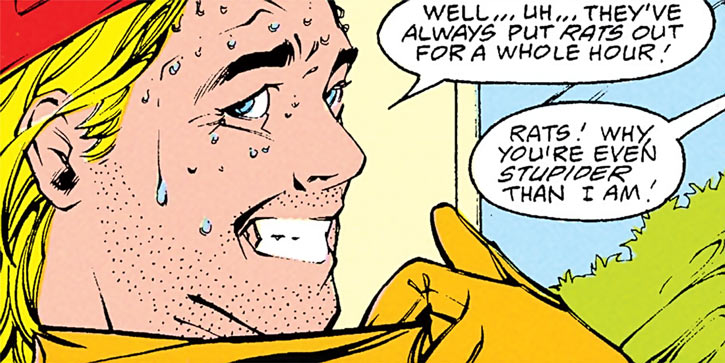 He openly expects most everything he does to fail. He has zero delusions of competence, either for him or his compadres. Optimism is not an option.

In some ways, Cluemaster’s behaviour evokes chronic depression. He’s apathetic and haplessly nostalgic. He has occasional bursts of pessimism bordering on despair. But sometimes, he’ll stumble upon a bit of motivation as he daydreams about being well-off again.

Cluemaster also seems to have difficulties with considering the exact consequences of his actions.

“Then we’re foiled ! The whole caper is doomed ! We’ll starve to death ! I’ll never own a pair of white shoes again !”

(As guards wake up from Cluemaster’s KO gas earlier than hoped)
Major Disaster: “Works for an hour on rats, right ?”
Cluemaster (dejected): “They don’t make rats like they used to…”

Advantages:
Who you kidding mate.

Drawbacks:
Debt 2 (Traffic fines), SIA toward forgetting he’s got his mask on, MIA toward apathy, MIA toward cowardliness and pessimism, Uncertainty.

This version of Cluemaster takes but a handful of Dice Actions during his entire body of appearances. Therefore, these abilities are a rough guesses due to lack of material. The Injustice League sees a few successes in combat, but they’re Big Sir’s doing.

Weaponry (Missile) is almost certainly a smidgen too wide, as I doubt he knows archery. But crossbows and thrown missiles should be OK.

His Mayfair stats are formulaic and thus much higher. I wouldn’t put too much stock in those, alas. The same Mayfair entry that observes that he’s a complete loser also gives him 50 Hero Points… 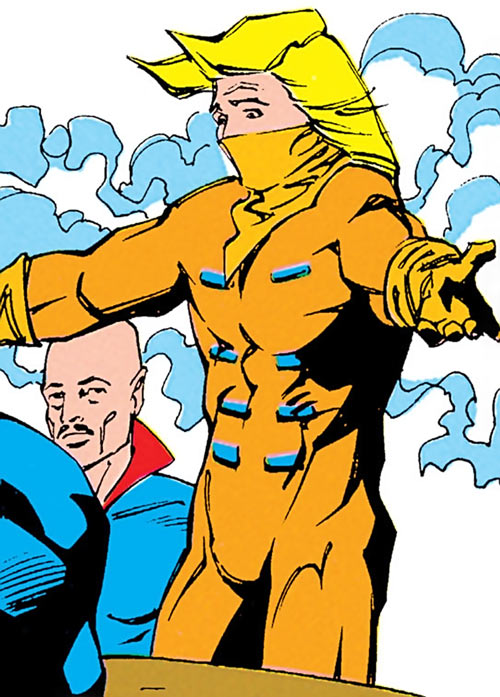 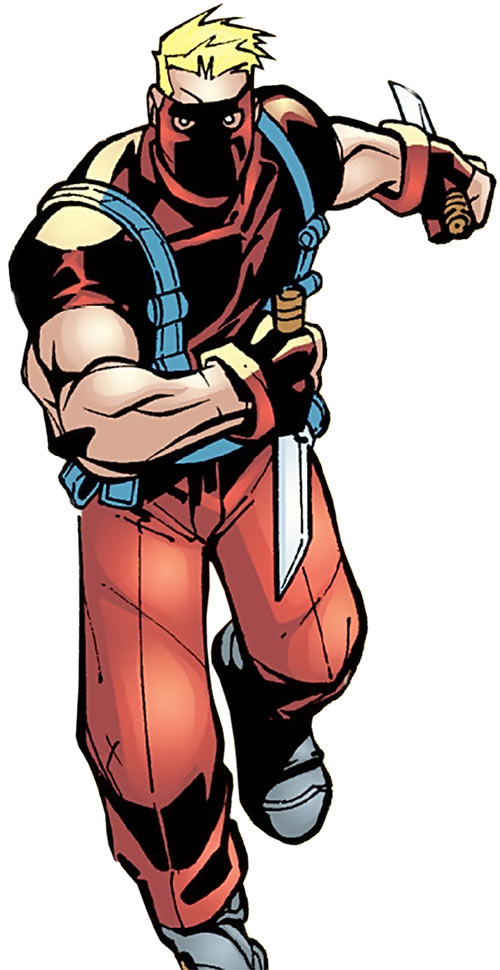