Coachwhip is a minor costumed Marvel Comics criminal. She first appeared in 1988.

Her profile is intended to be read after our profile for the Serpent Society. Which presents a whole lot of context and history for Coachwhip and her colleagues.

She’s stock muscle with a special weapon, easy to use. In that respect she’s similar to, say, Whiplash (Leeann Foreman). Yet there are also some hooks for character development, which have yet to be used.

Coachwhips are long and slender snakes, found in Mexico and the Southern US.

Coachwhip is a trained athlete and a close combat expert.

She seems genuinely skilled with whips. Powerful super-heroes have been surprised by how quickly and accurately she strikes, forcing them on the defensive for a bit. And street-level heroes might learn the hard way not to underestimate her.

It is possible that she also has some sort of legal training – and perhaps managerial experience. Maybe she’s a disgraced corporate lawyer ?

Her signature weapons are segmented, sort-of-chain-like steel whips. These are firmly tethered to ejector holsters on her wrists.

The design might be similar to Chinese designs of chain whips, such as the nine-section steel whip (九節鞭).

There seems to have been three generations of whips :

In 1994, she seemed to use ordinary (but possibly metallic) bullwhips. Since the Society was largely retired at that time, she may have felt that replacing her signature weapons wasn’t worth the money. 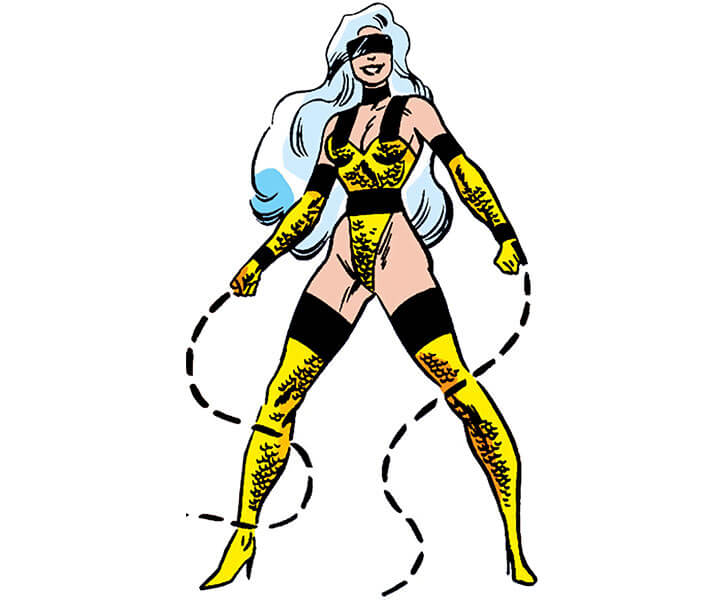 Like Diamondback (Rachel Leighton), Ms. Keener may have been a costumed criminal with a speciality weapon – and who realised that a species of snake had a name resembling said weapon.

Which meant that she could adopt a snake-themed identity. And from there join the lucrative Serpent Society. Bingo.

However, Coachwhip was first recruited by the Viper (Ophelia Sarkissian, formerly Madame Hydra).

Other recruits were Boomslang, Rock Python and Slither.

Even though the Viper’s plot ultimately failed, Coachwhip and most others successfully applied to join the Society.

It seems that Ms. Keener was also involved in the everyday management of the Society and its assets. But it’s hard to say for sure.

During the Acts of Vengeance events  , Coachwhip was one of the super-villains who decided to leverage the chaos. She ran into, and allied with, Killer Shrike (Simon Maddicks) and the new Ringer (Keith Kraft).

The idea was to defeat some super-hero to build up rep. They engaged Moon Knight (Marc Spector). But Coachwhip toyed with him rather than fry him, and was thus defeated – with help from bystanders.

During the “trial” of Diamondback (Rachel Leighton), Coachwhip was the prosecutor.

In 1991, a lady wearing what might be a variant Coachwhip costume was seen among Superia’s Femizon. But it seems more economical to assume that it was Yellowjacket (Rita DeMara) with minor design changes.

In 2008, Keener (plus Rattler, Fer-de-Lance, and various non-Society criminals) were nearly scammed by the Bookie at a Bar With No Name.

Likewise in 2012, she was among the innumerable criminals hanging around in Bagalia. Coachwhip was apparently dating Thunderball (Dr. Eliot Franklin).

During the mid-2010s, Coachwhip was on the Serpent Solutions board. But when the company was taken down, Keener was defeated by Misty Knight.

In 2018, she was on the Serpent crew working for Constrictor (Frank Payne’s son). But she distrusted him, and was soon proven right.

(In those two issues she didn’t appear to be armed. I’d assume that it was an art glitch.)

In 2019, she was among the many animal-themed supervillains hunted down by Kraven (Sergei Kravinoff) and Arcade’s clients.

In 2021, Coachwhip, Puff Adder and Black Racer worked as additional bodyguards for their old employer the Viper (Ophelia Sarkissian).

The height and weight listed in this entry are the official values. But she’s seldom drawn that tall.

Coachwhip’s costume seems to be any bright yellow one-piece swimsuit that struck her fancy at the shop. She prefers Brazilian cuts.

This’ll be complemented by yellow stockings – or mid-thigh-high yellow soft boots. On one occasion she added a light, fitted, yellow long coat.

Starting in 2016, she added bright yellow bicycling shorts to the outfit.

One part of the costume is a long, white wig. It might be because her natural hair is of an easily recognisable red-orange hue… unless of course this too was a wig.

There’s a brief scene where her actual hair is exposed – it seems shorter and curlier. But a colouring mistake made it… the same colour as her white wig. So we shall never know the truth about this IMPORTANT MATTER.

She almost always wears her yellow visor. It is possible that she has an ophthalmologicalStudy and treatment of disorders and diseases of the eye condition, such as sensitivity to bright lights. On the other hand we once see her reading outdoors in Arizona daylight without her visor on.

(TSR’s Gamer’s Handbook to the MU stated that her eyes were somewhat light-sensitive, but where this information comes from is unclear).

By the mid-1990s, Ms. Keener seems to have gained three bra cup sizes. Perhaps she had high-end enhancements done. 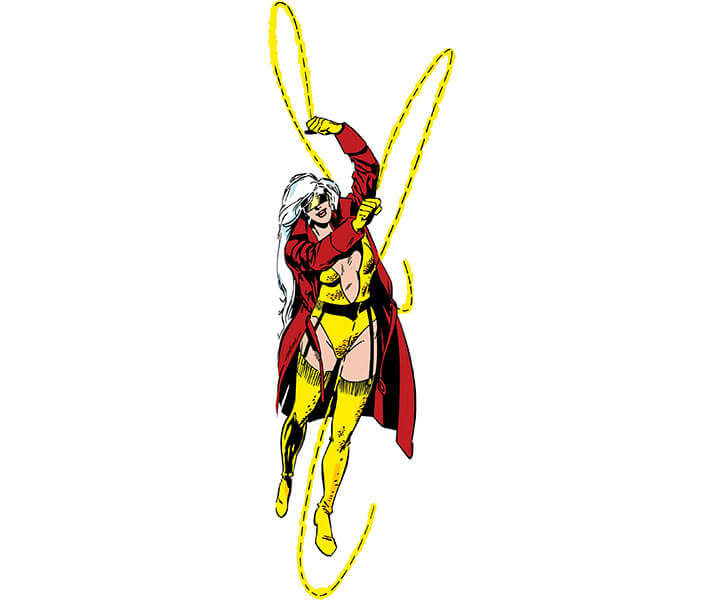 Early on, she liked thrash-talking by presenting herself as shameless, amoral and brutal. With frequent allusions to rough sex. This dated “bad naughty woman” persona receded then disappeared during the 1990s.

She also frequently acts in a cruel manner, using her electrified whips for torture rather than for a quick victory. Which tends to lead to her defeat.

Coachwhip seemed sullenly hostile toward Black Mamba, the Asp and Diamondback. It might be the “rivalry with other beautiful women” cliché. But I prefer to assume that it was specific bad blood dating all the way back to the Viper coup.

She has a tendency to underestimate her opponents, especially women.

“Coachwhip is my name – flaying flesh is my game !” (her usual opener line during the 1980s, kinda like a brand thing).

(During the Diamondback trial) “Might I warn you that evasive answers will only serve to convince the jury that you have something to hide.” (…) “What we have here is a loose cannon whose need for physical gratification with our greatest enemy could ultimately put each and every one assembled here today behind bars !” 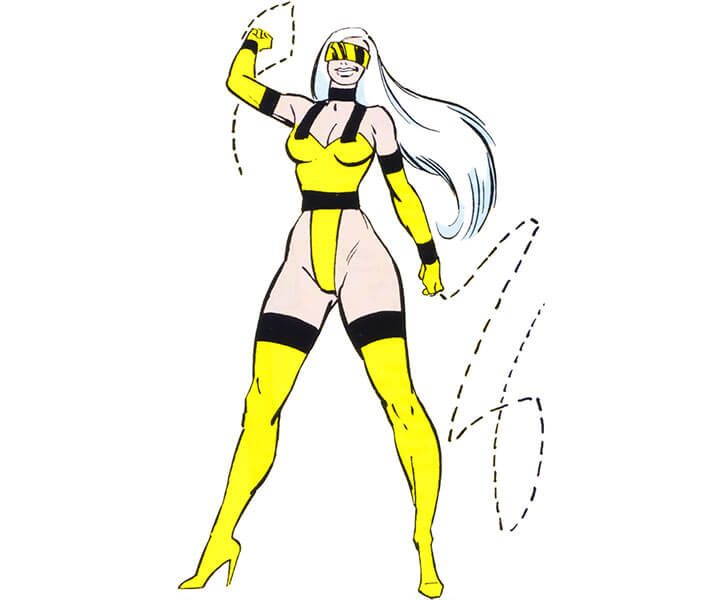 There’ll finally be a reissue of those sourcebooks in mid-2022, so we’ll be able to redo those terribly-printed illustrations. Yay.

Coachwhip’s electro-whips once failed to stop Diamondback and Mamba. My assumption is that Keener was using a lower power level because she wanted them to suffer longer.

Hence the note about Snare reduction when Lightning’s lower. There were too few APs of Snare to stop Rachel from performing a good attack.

During her first few appearances, her Weaponry score likely was a 05. But with Captain America Vol. 1 #355 the “whoah, she’s fast !” thought bubbles from her opponents start appearing.

She seemed back to that 05 in 1994, presumably from relaxed training.

She usually spends her Hero Points evenly on AV and LDD, with an emphasis on the opening attack. Especially if she utters her “flaying flesh” slogan.

If she wants to toy with her opponent, she won’t use HPs offensively – and could become so overconfident as to be Blindsided.

For scenes where the Serpent Society members are just here to be beaten up, you can lower her Weaponry to 05 and her Hero Points to 010.

Her stats aren’t huge to start with, so that’s enough to model the poor performance.

Writeup completed on the 6th of December, 2021.