As Jackson Beck said during every opening:

“G.I.Joe is the codename for America’s daring, highly trained special mission force. Its purpose: to defend human freedom against Cobra, a ruthless terrorist organization determined to rule the world.”

The Cobra Commander was the leader of the enemy organization from the original G.I.Joe TV series from 1982-1987.

The Cobra Commander has no special abilities of his own, save his charismatic skill at rallying thousands of followers to his cause. 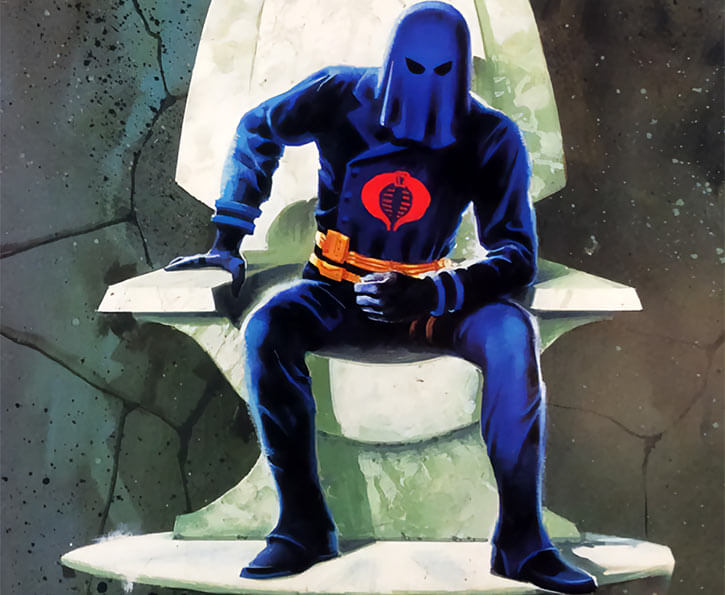 A previously unidentified nobleman of Cobra-La was horribly disfigured in a lab accident. To the point where it took a strong stomach to watch him eat.

Golobulus selected this man to leave Cobra-La and assemble an army to take over Earth on their behalf.

All seemed well in the first years of Cobra’s history.

But by the time the Commander was ready to use Cobra’s Mass Device to terrorize Earth into submission, the U.S. military high command had assembled a strike force code-named G.I.Joe. It was tasked with protecting American interests against Cobra.

Since then, Cobra had been driven back consistently from their objective of world domination. Even when using such superweapons as the Weather Dominator and the Pyramid of Darkness. 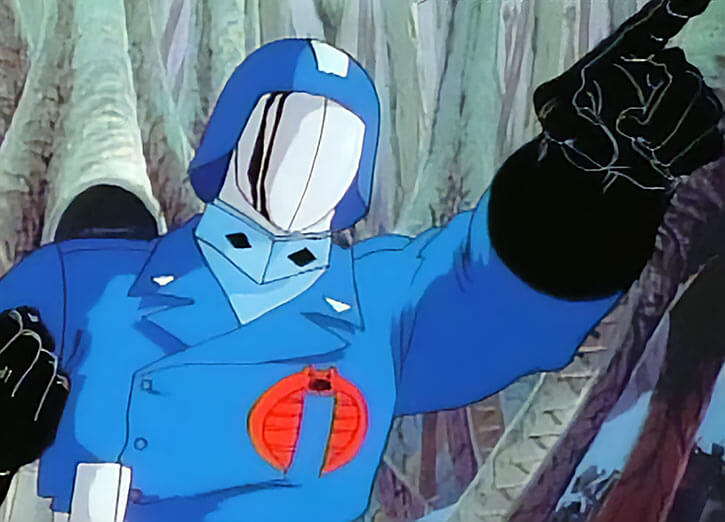 Eventually, Golobulus became so disgusted with the Cobra Commander’s lack of progress that he sent a psychic motivator to Cobra Island. That was to give Dr Mindbender the inspiration and knowledge necessary to amalgamate the DNA from several historical leaders.

The composite clone christened himself Serpentor when he was brought to life. Unfortunately, without the DNA of Sun Tsu, Serpentor proved himself only barely superior to the Cobra Commander.

After failing to capture the Broadcast Energy Transmitter from G.I.Joe and “losing” Serpentor to them, the Cobra Commander led the remnants of his forces back to Cobra-La. But he found the reception there hostile.

When Golobulus took control of Cobra, he put the Commander on trial for failing in his task. The Commander was sentenced to exposure to the same mutation spores he planned to use on all of Earth.

This betrayal by Golobulus shifted the Cobra Commander’s loyalty in the Joes’ favor temporarily. And the transformation was slow enough that the Commander was able to lead G.I.Joe Roadblock out of Cobra-La.

From there, Roadblock warned the rest of the Joes about Golobulus’ scheme.

Even when he had completely mutated into a boa constrictor, the Cobra Commander recognized that the snake that Serpentor threw at Lt. Falcon was a danger. He saved Falcon from it, enabling the G.I.Joe to destroy the mutation spores and Cobra-La with the B.E.T..

Sometime later, the Baroness was able to revert the Cobra Commander to humanoid form. She used an energy source called Dragonfire.

But by the time he had regained his full intellect, the Commander had no choice but to dissolve Cobra and sell its technology for continued sustenance.

In the course of such a deal with Victor Drath in A.D. 2006, he’d transferred the personalities of Rodimus Prime, Ultra Magnus, Springer, and Arcee from their Autobot bodies into Synthoid humanoid bodies.

Drath was captured in the ensuing ordeal, but the Cobra Commander was last seen still at large, ready to help out any terrorist who can pay his price. 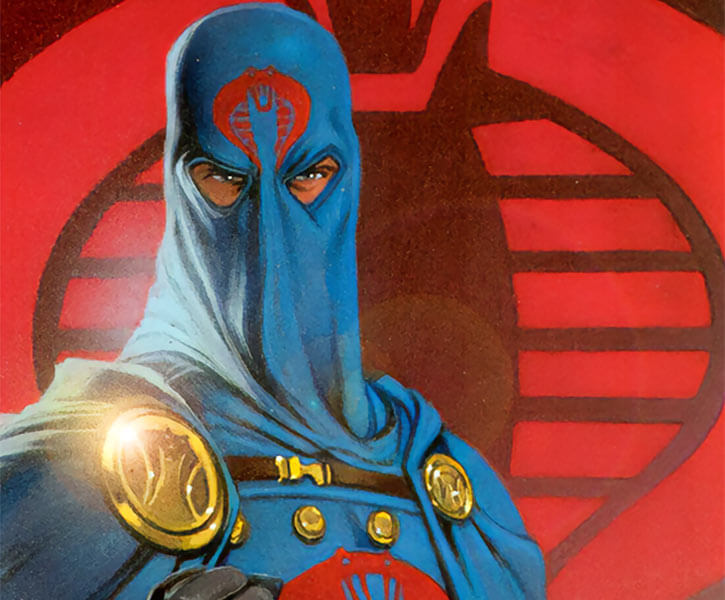 The Cobra Commander is of average height and slender build.

He always wears his azure uniform, alternating between a helmet with its reflective faceplate and his dark blue hood, which covers all but his eyes.

He speaks with a scraping voice and frequently hisses.

Beneath either mask, his skin is also blue, but of a lighter shade than his uniform. And he has what appears to be dozens of extra eyes and at least three layers of blisters all over his scalp.

After being restored to humanoid form by the Baroness, the Commander still retained the scaly skin of a boa constrictor. After a year or so with a new, more metallic uniform design, he resumed wearing his classic uniform. 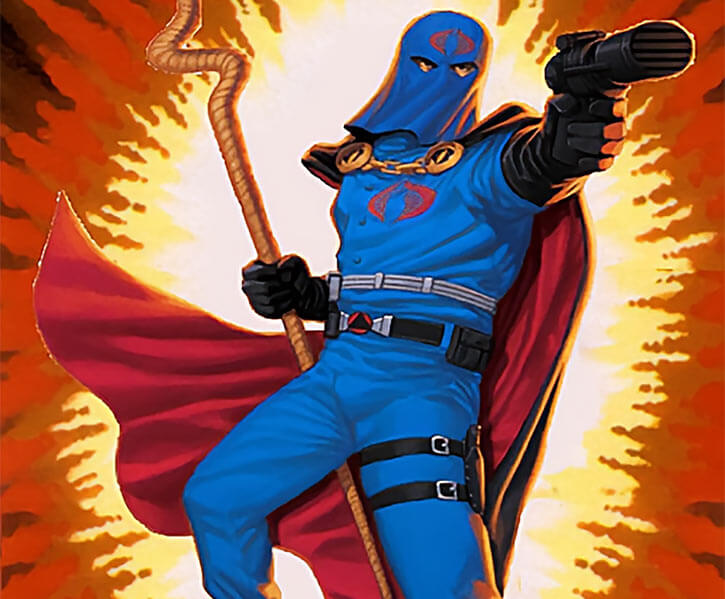 The Cobra Commander is considerably smug in his position, and supremely arrogant. He believes that no one can stand against the combined power of his military followers and his superweapons.

When Serpentor usurped his command, Cobra Commander resented suddenly becoming nothing more than a scapegoat for Cobra’s failures. He surreptitiously allowed anyone he thought would assassinate Serpentor to get through Cobra security to do it.

After being restored to humanoid form, the Commander reverted to his grandiose schemes for world domination. He no longer had to worry about Serpentor or Golobulus yanking it out from under him once it was attained.

Eventually, though, he began to tire of his own endless scheming. he therefore took on Destro’s old role, selling his technology and acting as the voice of reason to his customers.

“I designed the Cobra Temple to guarantee us secrecy and security.”

“Citizens of the world, we have a power greater than any seen in the history of mankind. Look and tremble. [MASS Device disassembles Eiffel Tower] This is but the first in a series of demonstrations of the awesome power of Cobra. Beg your leaders to surrender to Cobra at once.. You have twenty-four hours. Cobra !”

Xamot: “One thing more: you must not activate the fourth cube until I have escaped from the G.I.Joe stronghold with Tomax.”
Cobra Commander: “You have my word. I wish you every success. COBRA !”
Xamot: “Oh… Cobra.”
Cobra Commander: Destro, you and the Baroness will activate the fourth cube the instant it has been positioned.”
Destro: “But the pyramid of darkness…”
Baroness: “Will doom Tomax and his brother to the same fate as G.I.Joe.”
Destro: “Ah, leaving us with two fewer partners with whom to share the Earth. A perfect plan, my dear Cobra Commander. Perfect !”

“Don’t be such a crybaby. If our new leader is a weakling, we’d better learn about it now… COME ON, SLAUGHTER ! KICK HIS FANGS IN !”

“But what happens when Cobra realizes how imperfect you truly are ? You need me… for a… for a scapegoat.”

“No, not this way… that way !” [Allows apparent assassin of Serpentor to pass.] 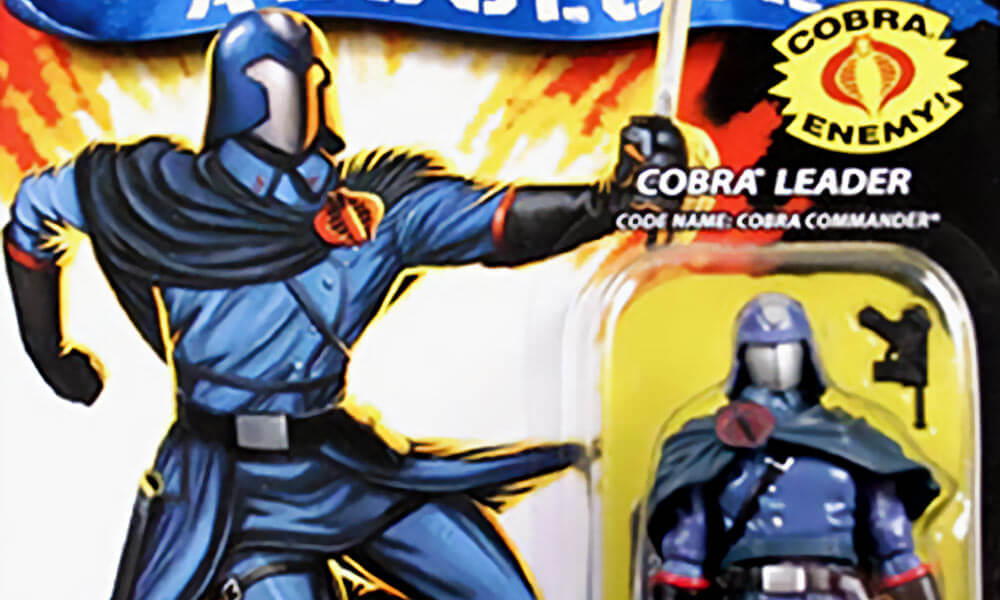 In the DCU, Cobra would have to deal with being thwarted by metahumans as well as G.I.Joe.

The Commander would very likely consider Kobra to be a bitter rival not only for conquest of the world, but also for the name Cobra.