Cobra is a terrible 1986 Golan-Globus action movie and Sylvester Stallone vehicle. It was commercially successful – anything with Stallone in it would sell, back then. The film’s eager, relentless accumulation of action movie and societal doom-and-gloom clichés made it something of a cult classic since.

Stallone’s character is a killer maverick hard cop cliché, cranked to 11. It falls short of Judge Dredd when it comes to exaggeration, but not by that much…

Cobra is a supercop capable of mowing down hordes of criminals. He’s fast, strong, tough and very good at both hand-to-hand and armed combat. His vehicular skills are incredible, making him capable of powerful stunts on vehicles.

He’s also capable of doing real police/detective work and all in all makes for an effective, although brutal, police officer.

Cobra is usually armed with a variant Colt M1911A1 – namely a Colt Gold Cup National Match converted to 9x19mm and with custom grips.

If he expects heavy combat, he’ll sport a submachinegun with a large, early version of a laser sight affixed on top. During the 1990s it was erroneously reported to be a modified PKS9 Ultralite 9mm (an obscure SMG that may never have been actually produced). But it is actually a 9mm Jatimatic, a rare Finnish SMG. Cobra uses it with 40-round magazines.

Los Angeles has been hit by a wave of brutal killings and then police have no clues about the assailant. When the killings continue, the LAPD calls in Lieutenant “Cobra” Cobretti from the special division to solve the case in his own brutal way.

Cobra, along his partner Gonzales, search the street for clues. They eventually find a survivor and witness to one of the killings. They decide to protect her in order to capture the killer when he surfaces to kill her. It is quickly found, when they are attacked, that the killer is in fact a cult of mad slashers. They are using axes to kill for their pleasure.

Cobra, Gonzales, a female cop and the witness, a model named Ingrid Knudson, leave town for a police safe house. Unfortunately, the female cop that joined them is part of the cult and promptly points out their whereabouts to the cult. 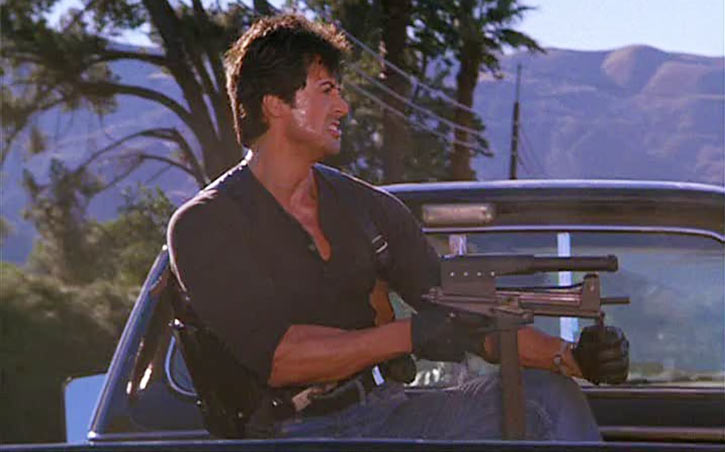 Then in the small city they are in the cult arrives and combat ensues. Gonzales is shot in the leg and taken out of the fight. Cobra runs away, while mowing down hordes of cultists, with Ingrid to a factory.

There, using ambush tactics, Cobra destroys all of the remaining cultists. He finally comes face to face with the cult leader. They fight it out, but the fight quickly ends when Cobra lifts his opponent up and impales him, through his spine, on a hanging metal hook.

The threat is over, Cobra’s superior apologizes for the critique he has given Cobra for his attitude problems, Gonzales is sent to the hospital, and Cobra and Ingrid drive away together, as a couple (yup, he did get the girl !), into the sunset on his motorbike. Awww.

Cobretti is a sweaty, unshaved, muscular and tough cop with a real attitude (Sylvester “Sly” Stallone). He has black hair and brown eyes and usually wears a pair of blue jeans, boots and a tight, black T-shirt that well shows his muscles. Also, he often keeps a match in his mouth and wears a pair of big, mirrored shades along with a thin, metal necklace.

Although the shades are occasionally taken off, the black gloves he wears never are. In colder climate or when he’s getting info on the street, he’s wearing a black long coat on top.

Additionally, increasing his dangerous looks, is the fact that he often wears a couple of hand grenades dangling from his leather belt. They ride along with his specially crafted Colt whose handle sports an engraved picture of a cobra that just seems to look straight at you.

Cobretti is a cold and brutal cop specializing in ending the threats of psychopaths in Los Angeles. He never hesitates to kill and it doesn’t seem to bother him the least. Without a doubt he’s a fanatic. In fact, he’s only glad that he has put away one more criminal element. He won’t care much to follow the book, but instead just kills them.

He, for example, once blew away a psychopath who had basically gave up and had taken an entire store filled with customers as hostage. Cobretti just wanted to avenge the people that psycho had already killed. Afterwards he just went home and ate a frozen pizza while maintaining his weapons.

When a reporter asked him if lethal force was necessary and that the dead psychopath had rights, Cobra responded to him by angrily showing him one of the corpses and said: “Tell that to his family”. 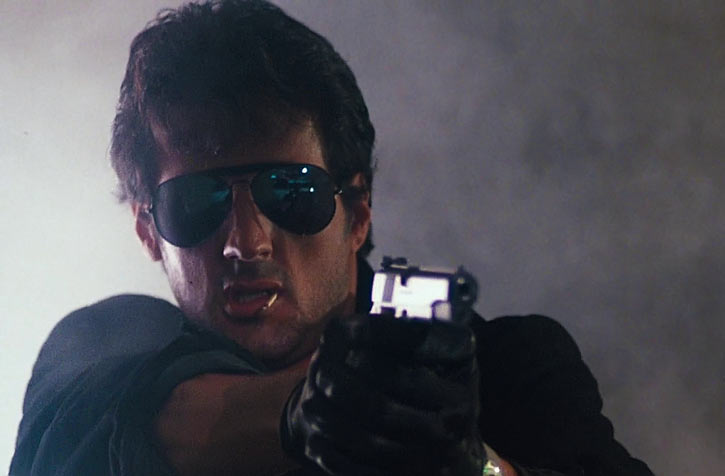 Cobretti usually speaks in a low, mumbling voice. He cares for his buddy Tony Gonzales and the two jokingly taunt each other constantly. He is always straight to the point and clearly disobeys authority. His viciousness, effectiveness (since he’s actually very good) and attitude problems have given him the nickname of Cobra.

He was somewhat softened up by Ingrid (Brigitte Nielsen), but that didn’t hinder him in the line of duty.

Cobra, muttering to a punk who’s smoking : “Not good for your health”
Punk : “What is ?”
Cobra : “Me” (crushes mouth and cigarette in it, then tears off punk’s T-shirt and slowly walks away)

Cobra’s boss : “Cobretti, you know you’ve got an attitude problem ?”
Cobra : “Yeah, but just a little one.”

Sure, since there’s always a demand for good cops in the DC Universe, just insert him as is. He’d make an excellent pal of Marvel’s Punisher or DC’s Wild Dog or Peacemaker, as long as they are only blowing away bad guys.

Still, Cobra is slightly less powerful than these guys so he might serve as a link to the local police for vigilante type heroes. 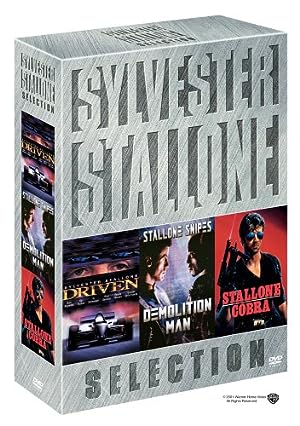 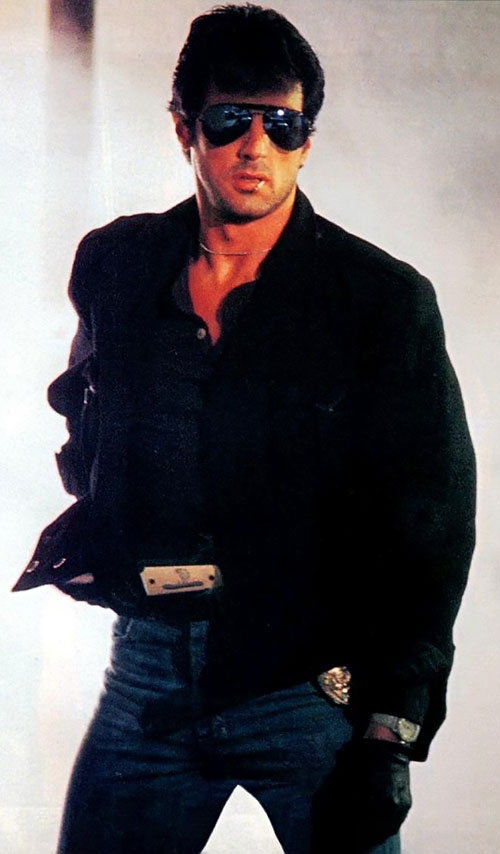