Another corp was the Python Patrol. Those troopers were issued Wraith technology incorporated into their uniform (BODY 04, Invisibility: 11, Limitation: Invisibility only against Thermal vision and Radar sense).

The standard Cobra trooper uniform consists of a blue jumpsuit, accompanied with a blue helmet and blue gloves, and bearing the Cobra sigil, in red, on the front upper torso. The uniform is then complemented by black boots, black knee-pads, a black strap-on knife sheath, a black, pouch-riddled belt, black webbing with a shoulder holster for the trooper’s pistol, and a black face mask.

Those Cobra troopers who were admitted into the Python Patrol wore a uniform that, while recolored, strongly resembles that of a Cobra officer’s. This snake-skin wraith suit consists of a red turtleneck sweater under a long-sleeved, green and yellow snake-skin shirt, black snake-skin trousers, gray boots, gloves, holsters, sheathes, and webbing, and a black helmet and face mask.

After their rank’s re-creation, the bottom-of-the-barrel Cobra soldier’s uniform was actually changed into a variant of the Viper’s. It consists of blue trousers, a blue vest, and a blue, short-sleeved shirt, coupled with a blue helmet that bears a mirrored, golden face plate that completely obscures the features of its wearer.

The uniform also has a black belt, black boots, and steel wrist guards.

Originally, the Cobra trooper represented a highly trained and highly motivated terrorist, one who hooked up with the organization in order to further his own, personal agenda. While criminal minded, these folk still knew what they were doing, and though they might fail in their missions, they weren’t necessarily bumbling fools. They were either ex-military or trained by Cobra to fight.

After Cobra re-created this particular rank, the general mindset of these folks was somewhat different. Being made up of the dregs of human society, these folk were the crackpots, the mass murderers, and all the insane anarchists who needed an outlet for their personal violence.

These people may or may not have the talents listed above, as their qualifications aren’t as high as they used to be.

By Firebomb , with MEGS conversion by Sébastien Andrivet. 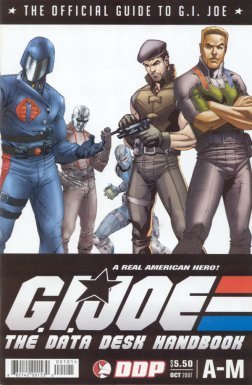 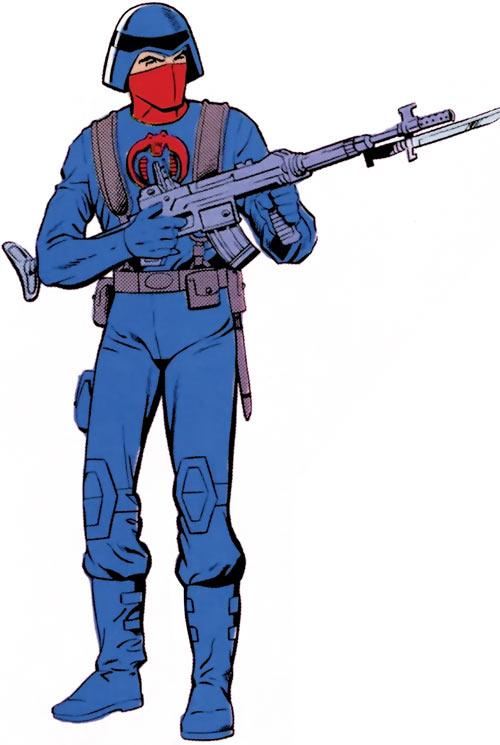