Cockroach Hamilton is a skilled street fighter and hitman. He demonstrated psychotic strength and undeniable courage.

He has high tolerance for pain and the polar opposite of a glass jaw. Even when punched with the borderline superhuman strength Cage employs against non-metahumans, Hamilton seemed unhurt.

He built, owns and uses “Josh”, a monster shotgun that can take down superhumans at close range. Among the oddities that surround Josh are how the recoil is handled, how a basic side-by-side shotgun can jam, and how Hamilton can reload it. Josh can be reloaded to fire as fast as any clip-fed gun, though Hamilton is almost never seen actually reloading it.

In the Hollywood tradition, being shot by Josh at short range will send people flying back. Yet Cockroach Hamilton doesn’t even budge when shooting.

Dontrell Hamilton grew up in the distinctive Harlem neighbourhood after the Great Depression. He presumably was born in the 1940s. When first encountered, he was living alone in a tenement near 143rd and Lenox.

Hamilton developed a disorder making him uncomfortable outside of Harlem. He needed to live in the exact same squalor that marred his childhood. His rathole was kept filthy, he only ate pre-packaged junk food such as cheese snips (and came to consider real food with disgust) and the place was crawling with cockroaches.

Hamilton found the cockroaches and their noises soothing and familiar. He considered them pets and friends, often talking to them.

Under unknown circumstances Hamilton became a full-blown hitman working for the local mobs. During the early 1970s he became the main torpedo for mobster Piranha Jones. Perhaps his strength and constitution — which seem to belong to a much larger, healthier and muscular man than Hamilton — were spotted during some street fight.

As Piranha Jones’s main assassin, ’Roach Hamilton helped prepare the theft of valuable but very dangerous gas from Adonis Chemicals. In particular, he was sent to eliminate the inside contact within Adonis, one Harry Wentworth. Wentworth had provided Jones with the route to be taken by trucks transporting the gas.

Luke Cage (then known as Power Man) had been hired by Adonis to shadow Wentworth and tried to intervene. But Cockroach dislocated Luke’s shoulder by shooting him point blank before escaping.

Cage had his shoulder fixed and worked the Harlem streets to find Jones’s men. This led to an ambush where Cockroach sent in several thugs to distract Cage, then shot him close range with sleep gas rather than buckshot. The unconscious Cage was bound under the Harlem River Bridge so he would be torn in half when the mechanical bridge lifted to let a tall boat pass. 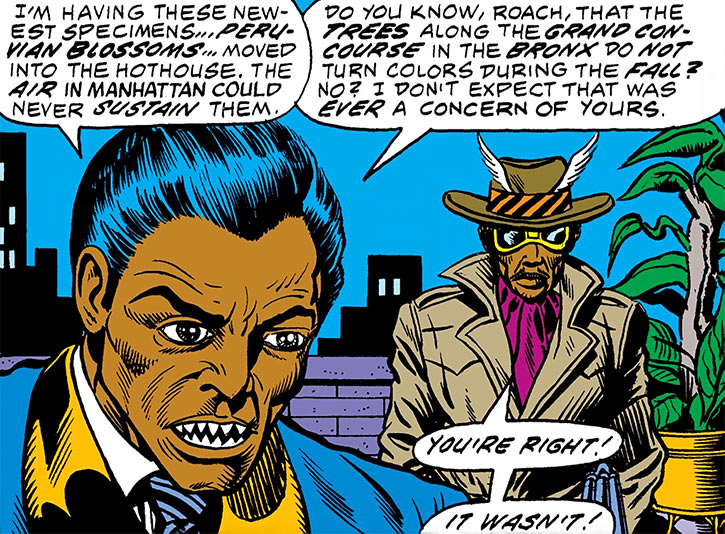 Cage survived. He was back when Jones, Hamilton and elite mercenaries launched their raid on the Adonis convoy. Cage nearly foiled the raid, but was almost knocked out in an explosion when he prevented the carcinogenic gas from being released in the middle of New York City. Hamilton finished him off and captured him.

Taken to Jones’s headquarters, Cage freed himself. Then, he grabbed and destroyed ’Roach’s shotgun. Furious, Hamilton locked Cage (and Jones) into Jones’s piranha pool. He then left. Presumably, Hamilton rushed back home with the torn remains of his shotgun to “save Josh’s life” by repairing his weapon.

Piranha Jones relocated to Connecticut — specifically Stamford — during the 1980s. Hamilton continued to work for him, though it is probable that he was commuting the 60 miles from Harlem whenever he was called in to work.

In 1992, Jones was targeted for death by both the Punisher and Terror, Inc.. Bad luck meant that the two anti-heroes attacked simultaneously and started fighting each other. Thus, even though Josh jammed repeatedly, Piranha Jones and Cockroach Hamilton got out of the encounter unhurt.

However, a member of the local underworld was killed in the fray. This left three local Maggia made women (Vita “Headcutter” Buchetto, “Babyface” Ann Repucci and “Cruella” Cortese) convinced that Jones was betraying their fragile alliance.

A firefight erupted in the main Stamford mall. “Cockroach” Hamilton had never liked the so-called “Mafia Princesses” anyway, and opened fire once he saw that they were openly packing. Terror managed to kidnap Jones and flee, losing the Mafia Princesses, the Punisher and Cockroach Hamilton in a car chase.

Terror then killed Piranha Jones as per his contract.

Blood in the street

Though he had lost the man who had retained his services for years, Cockroach Hamilton eventually got contracts from employers higher in the food chain than Jones had been. He even started working for the criminal genius Nightshade (Tilda Johnson).

Much of his work for her is undocumented. But in 2000 he, “Boss” Morgan, Cottonmouth (Burchell Clemens) and Stiletto (Tom Stuart) were part of a hit team working for Nightshade to kill the Black Panther. Their client was Erik Killmonger. However, the Panther received the unexpected backing of the Falcon, Luke Cage and Iron Fist.

Cockroach Hamilton continues to work for Nightshade in New York City. He is a member of the loose alliance of criminals now using the Harlem Rivals name – which decades before was used by a small Harlem street gang with which the future Luke Cage ran.

He responded when Nightshade assembled a “flashmob” of old-school New York City hitmen to kill the new Power Man (Victor Alvarez). However, Iron Fist and Luke Cage joined the fight. Cage, being much stronger than he was in the 1970s, punched Hamilton out in one blow and again wrecked his beloved scattergun.

At one point it seemed that he had decorative patches looking like cockroaches on his hat and coat. Well, these may have been real cockroaches, but that seems doubtful.

The mentally alienated Hamilton is only comfortable living alone in his Harlem tenement, talking to his shotgun and “his” cockroaches. Everywhere else he’s curt and aggressive and wouldn’t mind killing people if that means going back home faster. He has next to no empathy, but he’s undeniably loyal toward his employers.

The main thing Hamilton likes in life is his shotgun. He’s even more loyal toward his scattergun than toward his employers. He talks to it as his best friend, cares for it, projects a personality onto it, and reacts to people damaging Josh as if they had just maimed a close friend. The dialogue even hints that he hallucinates that the shotgun is talking to him.

“I got myself a target to waste tonight, hero — don’t matter none to me whether I kill one… or two… and you just elected to be the first !” (BOOM !)

“Maybe so, Cage — but me and Josh here, we got some last minute words with you. And Josh has got a voice that’s gotta be heard !”

(Hitting the nearly unconscious Cage with the butt of his gun) “Yeah… Piranha, he’s impressed… but me and Josh, we been around a bit more‘n him, and we ain’t nowhere near as impressed. You get the message, Mr. Street-Tough-Black ?” (whock !)

“Look, Piranha, you got some real food a man can put in his guts ? How’s about a bag of cheese snips ?”

Hamilton would be a former hitman for the Council, who was thought killed by Nemesis but actually survived and continued to work for former lieutenants of the Council.

Bonuses and Limitations:
Weaponry (Josh) is Diminishing – the AV drops by one for every AP of distance.

“Josh” is Roach’s main gun – a rather improbable six-barrelled shotgun.

One barrel has EV: 06 (use the listed Range for Range). Unloading two barrels means a 07, four barrels mean a 08 and all six are a 09 – all EVs being Diminishing. When doing a six-barrels shoot, Roach will often spend Hero Points . In one instance it was sufficient to dislocate Power Man’s shoulder, even though buckshot cannot break Cage’s skin.

On one occasion Josh loaded with sleep gas capsules rather than buckshot. Consider this a Knockout Gas attack with the same EV as buckshot would. It may have been a Stunt Power on Hamilton’s part, explaining the rarity.

Hamilton once used Extra Effort when shooting Josh, and justified it by explaining that his gun had been loaded with special sleep gas capsules. 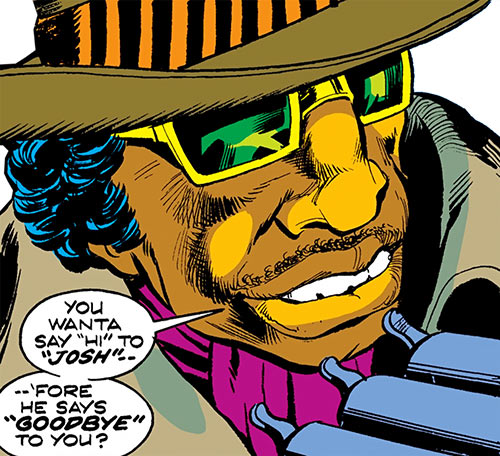 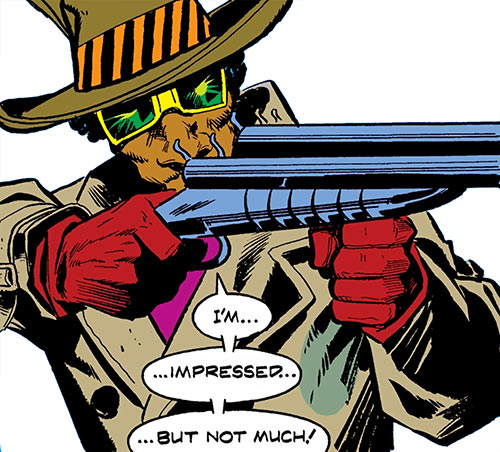 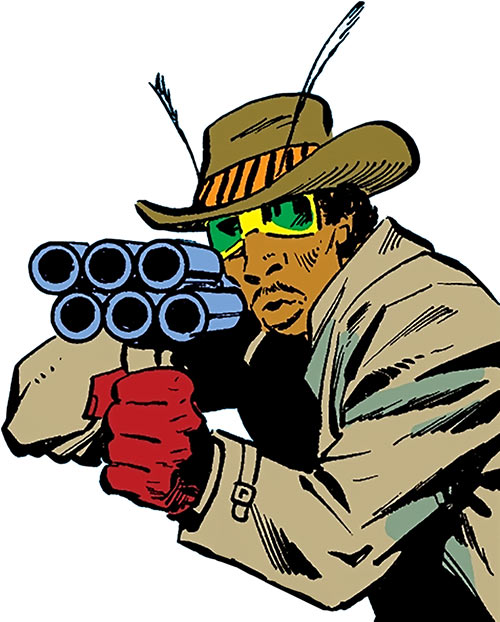 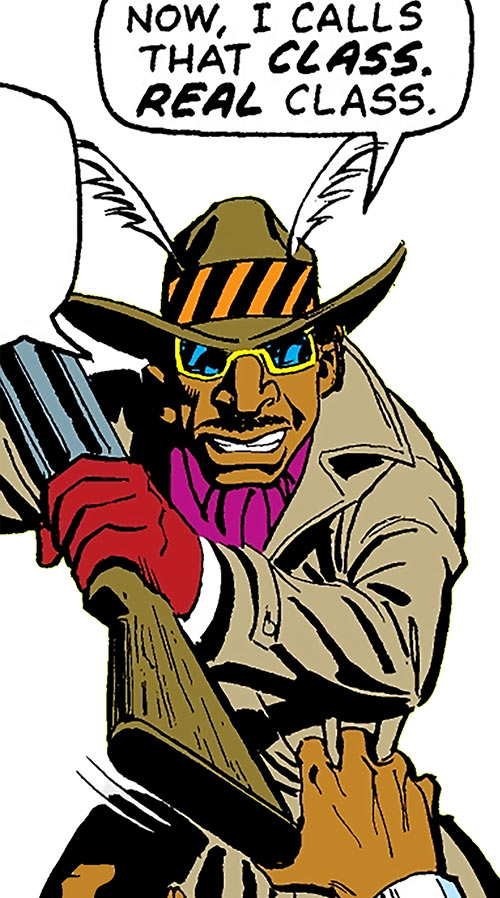 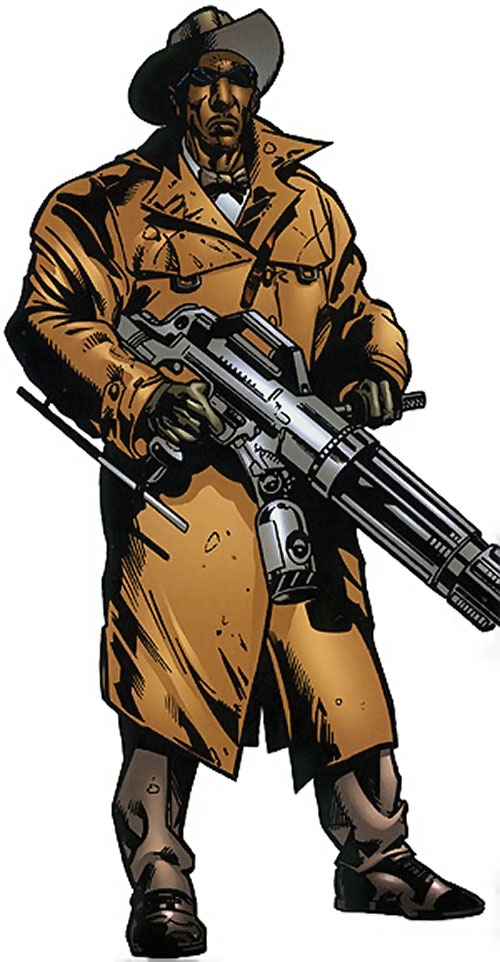 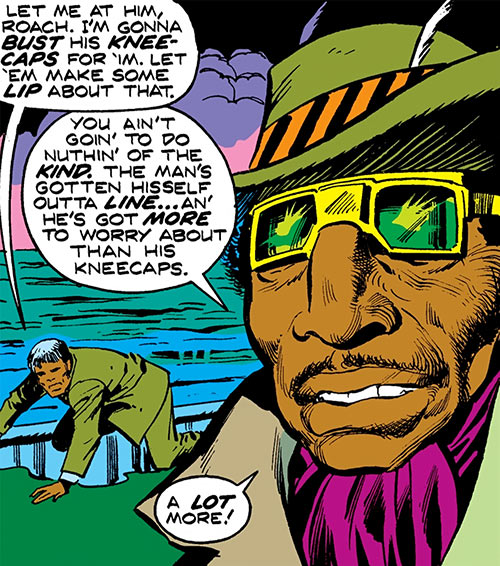 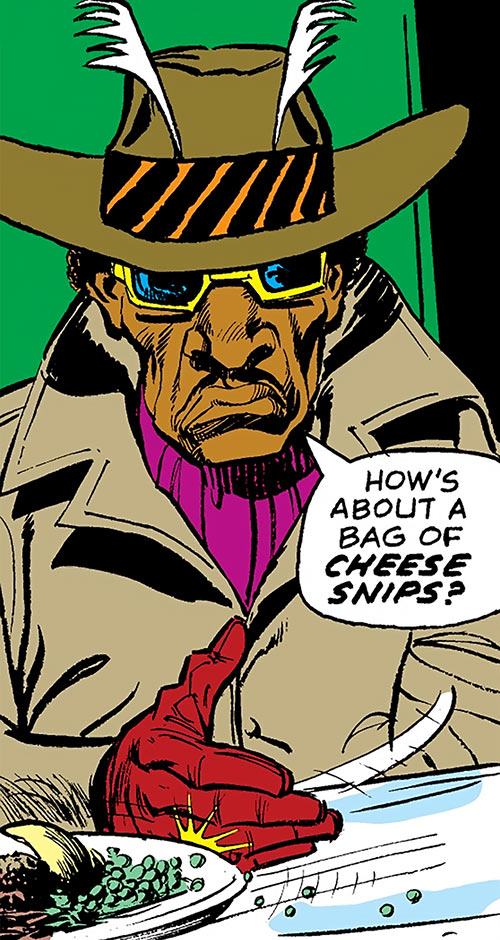