During the 1970s, First Issue Special was both a tryout title for new concepts, and a dumping ground for unpublished material.

This “lost” stuff is prime material for GMs who want to reinvent obscure but published characters for their games. Since it gives but the seed of a character.

A few weeks after this profile, DC writers started using First Issue Special characters again in Superman stories. Since the spirit of this entry was to provide semi-forgotten 1970s material as a seed, this profile will not cover the newer material. Those may eventually be described in another write-up.

This specific character (a creation of Gerry Conway and Carmine Infantino) feels like somebody’s Player CharacterRPG characters played by a player, rather than the gamemaster or the computer. – designed in a game of Villains & Vigilantes, Champions 2nd edition… or the Basic Marvel Roleplaying Game.

Drew seems to be a well-trained athlete and hand-to-hand fighter.

The Assassin has an odd array of psionicPsionics are sci-fi style psychic powers powers. He can : 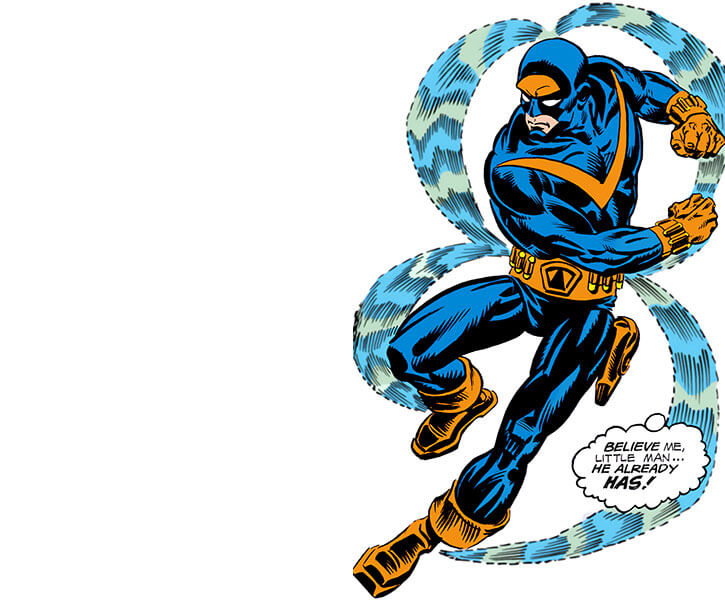 He also uses an array of small gadgets.

The main one is a custom-built, semi-automatic pistol shooting tranquilliser darts.

He also has a tiny but powerful blowtorch to cut some obstacles open.

The Assassin’s special gear was built by a man named Ben. However, the mob killed Ben early during the Assassin’s career. More details were promised in later issues, which of course never came.

It is thus possible that the Assassin only has a limited stockpile of gadgets. And he may not be able to repair damaged pieces of special equipment by himself. However, throw-away gadgets such as the pocket blowtorch seem to be available in ample supply. The Assassin does not hesitate to use them.

Most gadgets are smallish capsules stored bandolier-style on his belt or his bracers.

The Assassin’s arsenal likely is vaster than what could be demonstrated in a single comic. 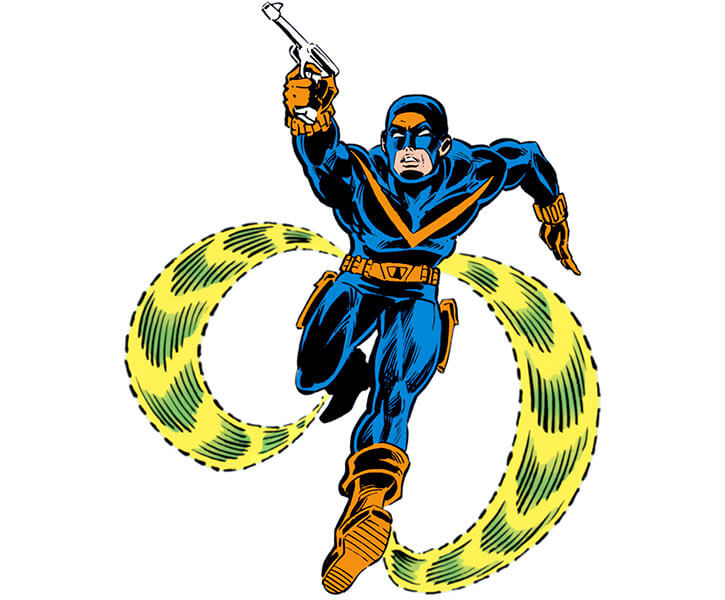 Johnny Drew lost his parents when he was 10. He was then raised by his adult sister Marie.

Unbeknownst to Johnny, Marie was working for one Victor Grummun. This heavily-connected criminal was also known as the Mob-Master.

A death in the family

As a freshman in Antioke University (possibly an equivalent of Antioch U  ), Johnny participated in an ESP experiment designed by one Dr. Stone. Drew needed extra credit for a psychiatry course he had been flunking.

During the experiment, the equipment was accidentally overloaded and blew up. That sent Drew to the hospital – but gave him psionic powers.

After the 21-year-old Johnathan recovered, Grummun had Marie executed in a public drive-by hit. She died in Johnny’s arms.

One of the first uses of his power was to blow up the drive-by car. That led to the arrest of the wounded gunmen.

Traumatised by Marie’s death, Drew trained to become a vigilante, adept in both physical and psychic combat.

As the Assassin (an odd choice of code name, since he wasn’t a killer), he started his vendetta against the New York mobs.

Meanwhile Stone deduced his identity and warned the police. But for two years Drew eluded both Stone and the cops.

This wasn’t difficult. The Assassin was mostly considered as an ally by the police. They publicly denounced his activities but actually appreciated his abilities to get crooks who would otherwise escape justice.

Shortly after that, the Assassin left for a showdown with the Mob-Master to avenge his sister. Little did Drew know, however, that two costumed henchmen were present on the Mob-Master’s yacht – Snake and Powerhouse.

The man whose code name was Assassin remained in comic book limboWhen a character still exists, but hasn’t appeared in comics for years for more than three decades. Even the results of the fight on the yacht remained unrevealed. 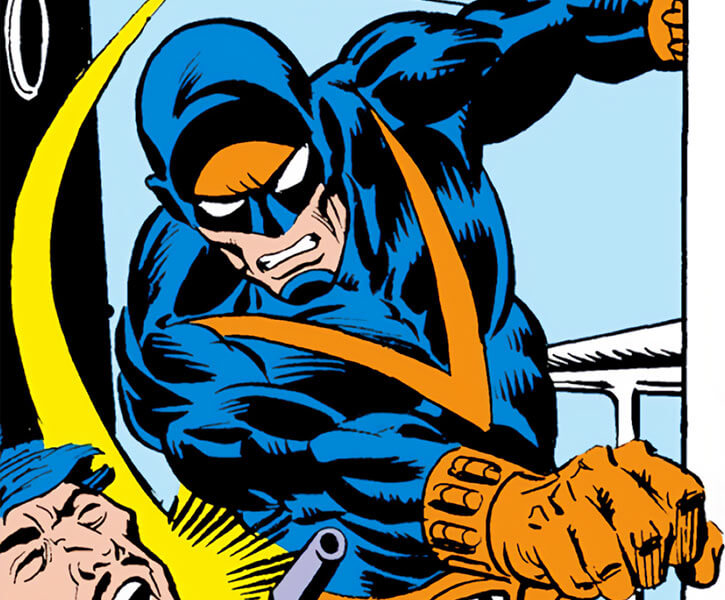 A standard 1970s, pre-Punisher urban superhero. He therefore will not kill if he can help it.

He is obsessed with revenge against the mob – and V. Grummun in particular.

“Right the first time, handsome ! And if you were as fast with your gun as you are with your mouth, you might have avoided this tranquilliser dart !”

“You don’t understand ! They killed Marie !”

“For a guy with powers like mine — powers your machine gave me — a cut hand is nothing at all !” 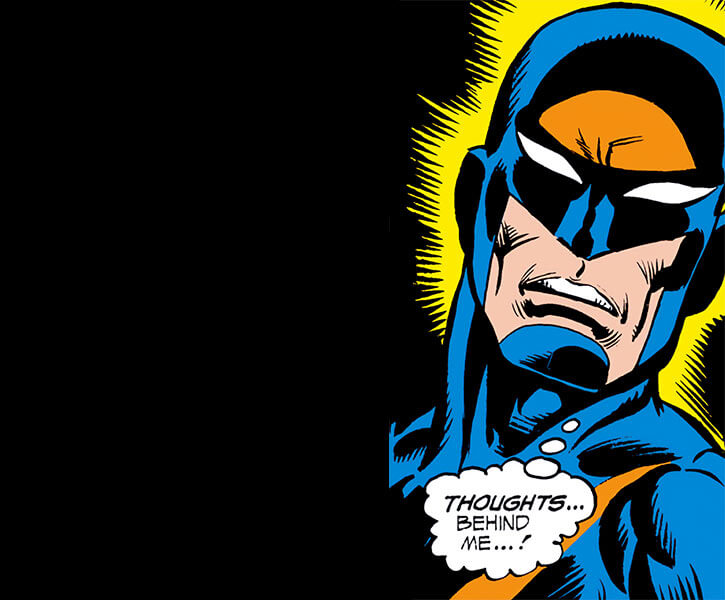 There is but one issue worth of material, so these stats are necessarily speculative. 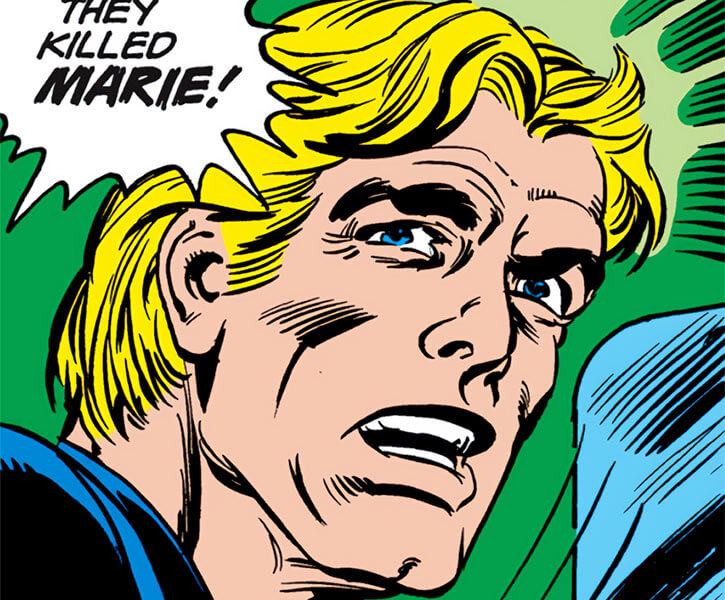 Telekinesis ● 20 points ● Descriptor: Psionic
– Ranged force Damage 8, Quirk – if C:A uses this, or uses Levitation or Telekinesis Powers at max Rank or for a prolonged time, using C:A starts requiring Extra Effort. This fades after a day or two of rest.
– Regeneration 1, Quirk 1 (Requires concentration, so a Move Action covers half the normal distance whilst Regeneration is running).
– Move Object 1, Subtle
– Enhanced Skill (Technology +16, Limited 3 to picking locks and safes), Quirk – as with Ranged force Damage above.