This entry is the second half of the profile. So you should first read the first half of Coffin’s character profile.

Coffin is now a powerful superhuman brick . And he retains all of his deadly skills.

That made him tough enough to actually beat the Monster in the sewers.

Coffin’s existence as a psionic  manifestation was short.

He came very close to killing X, finding him just after Wildboy Willie McCone had injected him with a virus neutralising his power. Miki D. had rescued X and was dragging the badly hurt vigilante in the sewers, when Coffin found them.

Coffin was going to make very short work of the defenceless X, but Miki D managed to sic the Monster on him. While Coffin was too powerful even for the Monster, by the time he beat the creature he had lost track of his prey. 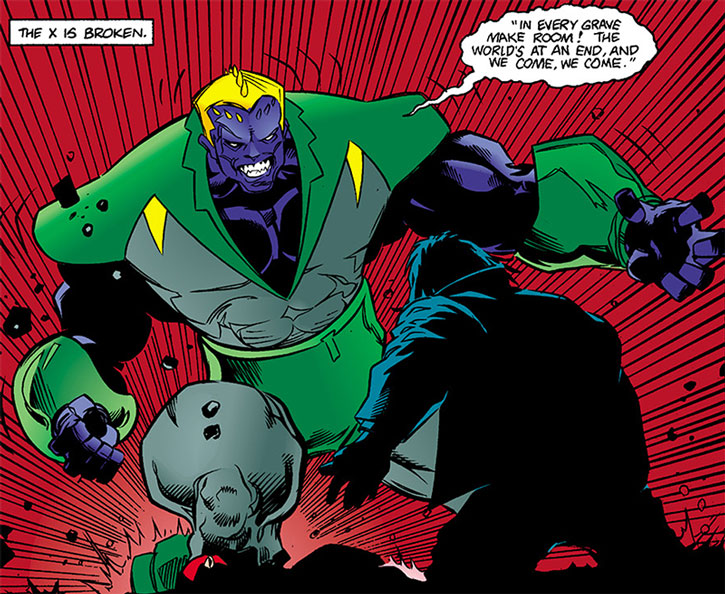 Coffin later found X when the vigilante was having his confrontation with the renegade general who had created him. Coffin ripped the general in two to get to X. X, however, had understood the truth about Toby Klein. He shot Klein in the head, killing him and destroying Coffin’s form.

Little change from his personality as Coffin.

“I’ll tell you a great secret, my friend. Don’t wait for the last judgment. It happens every day. Thou strong seducer, opportunity.”

Bonuses and Limitations:
Growth is Always On and already factored in