Coldheart is a trained agent. She wears an armoured suit that seems to enhance her combat skills and her strength.

She wields a pair of swords whose blades can generate intense cold for either melee or ranged attacks.

Coldheart is a former government agent. She was apparently tasked with apprehending rogue superhumans.

When her son Joey (and, seemingly, Joey’s father) was killed in a superhuman battle involving Spider-Man, she was traumatised and deemed unfit for service.

However, she had time to use her ID cards before they were deactivated. Thus, she stole her field gear. Apparently, her goal was to resume being Coldheart to kill costumed superhumans in revenge.

In 1994 she attacked Spider-Man (Peter Parker) and the Hobgoblin (Jason Macendale). Macendale had just taken his own family hostage in an attempt to claim his old life back. While Spider-Man was busy saving Macendale’s son, Coldheart paralysed him.

The boy beseeched Coldheart not to kill Spidey. She relented as she experienced traumatic flashbacks about her son. She left to pursue the Hobgoblin ; what happened next remains unrevealed.

Some years later, Kateri Deseronto stole some cash to make Christmas present. But she again ran into Spider-Man, who eventually had her arrested by the NYPD. When he inspected her apartment, Parker discovered that the other “occupants” were dummies standing for Coldheart’s companion and son.

Realising that Deseronto was still thoroughly traumatised, he collected her family photos that the police had left behind. He then sneaked them into her prison cell as a Christmas present.

Coldheart was eventually transferred to the Raft. During the big 2006 breakout, she recovered her gear, broke out and hit the mattresses.

Inexplicably, she hid with an improbable assemblage of costumed superhuman criminals — Speedfreek, the Cobalt Man and Nitro — in Stamford, Connecticut. These actions are so out of character that this may have been a different person using Coldheart gear.

When they were attacked by the New Warriors, Nitro exploded with unprecedented force. Nearly all persons present, as well as the schoolchildren next door, were slain. Deseronto was reported killed. This carnage triggered a new wave of outrage and legislation about superhuman activities.

This in turn led to a civil war  among the superhuman community and the rise of Norman Osborn as the security czar of the USA.

Coldheart was traumatized by the death of her son. She blames all superhumans for it. She hates both villains and heroes, perhaps because she feels that heroes are responsible for allowing innocents to die.

She hunts superhumans and rants a lot about children. It quickly becomes obvious that her grief has made her insane, and not terribly coherent.

Deseronto steals what she needs to survive.

She pretends to have a real life while squatting in empty apartments. Said apartments are occupied by two dummies standing for her deceased companion and son, whom she pretends are still alive and living with her. She has various rituals such as organising Christmas celebrations and giving presents to the dummies.

Coldheart is apparently part-Mohawk . She is teaching herself the language as a hobby.

“They can retire me… take away my clearance… say I’m no longer mentally fit to be a field operative, but… the armour is mine to use… again. Coldheart is going on one last mission. I’ve got a few super-powered freaks to sanction.”

“Stay right where you are, murderer !”

“Don’t talk to me about children ! All you super-powered vermin go around battling for your own glory ! You have no consideration for the world that exists around you. No thought for the countless innocent lives you put in jeopardy every time you put on that costume of yours !”

“Child… like my Joey… where were you when he needed you ? Did you even notice ? No, Spider-Man, I’m doing this for the children !” 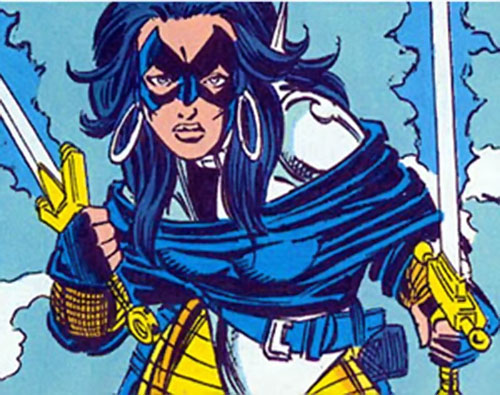 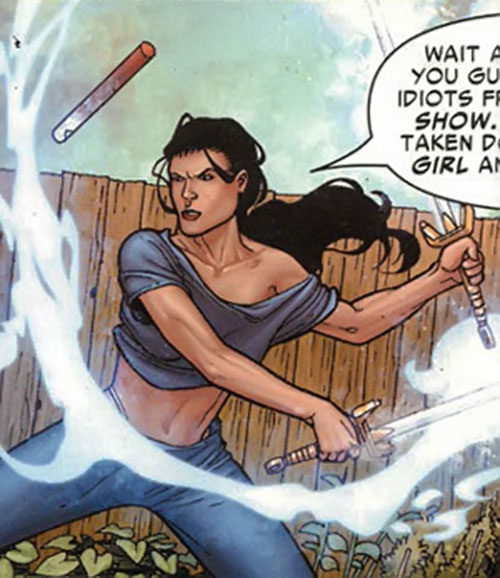