“He was the last Soviet soldier to leave Afghanistan. On foot. Returning fire. And laughing.”

Colonel Gagarin was seen in the 2001 Fury Limited Series. It was published under the MAX Marvel imprint, and it clearly doesn’t take place on Earth-616 .

However, it is close enough that somebody very much like him could easily exist on Earth-616. This writeup assumes that it’s what you going for, and adjusts details for 616 compatibility.

Gagarin is a formidable soldier, commando, sniper and assassin. He is greater than life – thriving in battle, intrigue and violence. He can single-handedly take down a SEAL team, and is a veteran military instructor.

Though he’s in his early 70s, Gagarin is easily as fit as a man in his 20s. It’s certainly possible that some ageing reduction serum is involved, much as with Nick Fury.

Rudi Gagarin fought at Stalingrad when he was seven. Although his main role was to carry water and ammo, rumour has it he also slit a few throats. One of the first recruits in the Russian special forces, he made major by 20. By that time, he commanded teams of Soviet advisers throughout pro-Communist nations in Africa, such as Angola and Libya.

In the 1960s, he infiltrated HYDRA and rose in the ranks. He strengthened its attacks against the West and sabotaged its actions contrary to the interests of Russia. He was back in USSR in time for the Việt Nam invasion by the US, and ran sniper schools for the VC and NVA. He also accompanied VC soldiers on the toughest missions.

During the war, the US made four separate attempts to kill him by sending in SEAL teams, but he eliminated them all to the last man.

Gagarin also clashed with Nick Fury on numerous occasions, either as a CIA agent or as the head of S.H.I.E.L.D.. Their clashes were particularly fierce and deadly. Gagarin called them “chess played with blood”. Still, they came to respect each other’s skill and courage.

Gagarin came to Afghanistan in 1981 and went native, hunting alone in the mountains which he knew better than anyone. During that one-man war Gagarin was credited with 275 official kills. He was reputedly the last Russian soldier to leave that country.

After the collapse of the Soviet Union in 1989, Gagarin quickly became a relic from another age. He started doing mercenary work all over the Third World. Still, it wasn’t the same. He had grown somewhat psychotic and dependant on the thrill of war, the tension of bombing runs around him, the death cries.

From time to time, he had a drink with fellow cold warrior Nick Fury in New York City, telling each other war stories.

In the early 2000s, Rudi Gagarin’s withdrawal from his war addiction grew too painful. He told Fury that he wanted to fight with him one more time – that they could again enjoy the sinister manipulations and puppet games, the rotting carcasses of Third World countries caught up in a conflict greater than themselves, the dying, the rush, the pain.

Fury turned him down, convincing even himself that he didn’t believe Gagarin to be serious. He was, of course, lying. Deep inside, he wanted to fight, too.

Gagarin went ahead and became advisor to a small island nation. From there he easily provoked the US into threatening a Grenada-style invasion. He knew that Fury and S.H.I.E.L.D. would attempt to removing him to prevent that. To make sure, he also tried to orchestrate the arrival of a Chinese military plane when the US assault would start.

Fury and a S.H.I.E.L.D. commando unit managed to cripple Gagarin’s defences to lower the provocation and decrease the US retaliation. But couldn’t prevent the assault from taking place, greatly damaging the island’s resources and killing civilians.

Fury himself ultimately managed to confront Gagarin and they fought to the death, with Fury finally strangling Gagarin with the Russian’s own intestine.

Gagarin has a hard-on for war. He needs the tension, the deceit, the death, the explosions, the camaraderie, the rush. He’s honest with himself in this regard, and considers the subjects of his warlike manipulations to be insignificant peons, mere ants when compared to the beauty of the game.

In war zones he is utterly confident and full of initiative, thinking ahead and easily anticipating the actions of his enemies. He will enjoy the easy sex and alcohol common to those circumstances, but always seems razor-sharp and never underestimates his enemies.

“You are an old and burned-out cold warrior, Nicky. It takes one to know one, believe me. Nobody loves us. Nobody wants us. Some lousy bastard took away our war.”

A former Sarge Steel nemesis who almost destroyed the DEO when Steel was leading it in order to have a last fight against him. He could even replace Ivan Chong is Steel’s backstory because, well, “Ivan Chong”.

Drawbacks:
SIA toward the Smell of napalm in the morning. 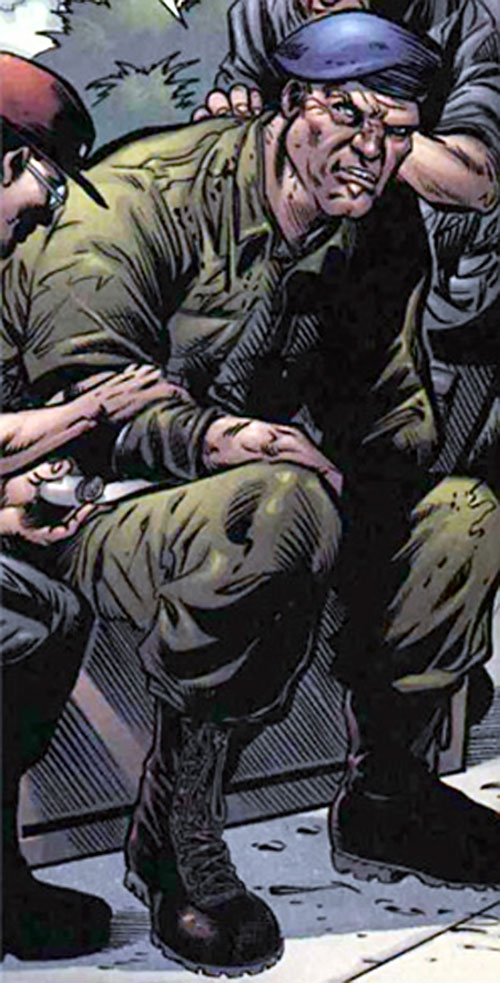