Colonel Ling appeared in a 1967 Avengers story. By himself he’s just a stock Cold War-era character, but :

Ling is a competent senior military officer and marksman. He’s smart, ruthless and has a commanding presence.

Colonel Wai Ling was the PLA officer in charge of one of the most secret bases in China (possibly in Hei-Lungkiang / Heilongjiang / 黑龙江省). This base hosted the decades-long project that produced the dreaded Psychotron. This was a towering electronic device capable of projecting terrifying hallucinations straight into the mind of China’s enemies.

As befits tradition, the base was built into a reputedly extinct volcano.

As the Psychotron project neared completion, the KGB sent secret agent the Red Guardian (Colonel Alexei Shostakov) to reinforce the base’s security. Ling was proud of having Shostakov serve under his command.

Due to the strategic nature of his base, Ling had extensive contacts within Chinese intelligence agencies.

When the Black Widow (Natalia Romanova) came to visit his base, he was thus warned that she was actually a double agent working for S.H.I.E.L.D.. After pretending to greet the Widow on his base as a respected colleague, Ling tricked her into entering the Psychotron chamber, and made her a test subject for his terror technology.

The Widow somehow resisted the effects of the Psychotron, and nearly managed to escape after feigning weakness. Puzzled by her resilience, the Colonel handed her over to one of his chief scientists, Dr. Yen, for analysis. Romanova was already familiar with Yen, who had brainwashed her some months before.

(As discussed in our Black Widow profiles, such incidents retroactively make sense given the enhancements she received. But these were retcons  introduced decades later.)

Meanwhile the Avengers — and in particular her ex-lover Hawkeye (Clint Barton) — learned of the Widow’s capture. They launched a rescue attempt. That played right into the hands of the Soviets, since a Russian general present at Ling’s base decided to seize the occasion to kill Captain America (Steve Rogers).

Behind the bamboo curtain

As it turned out, the hot-headed Hawkeye decided not to wait for the rest of the Avengers, who were concerned about the diplomatic consequences of an invasion. He went straight to China with recent recruit Hercules. Ling’s forces were outgunned by Hercules’ immense power.

Seeing this, the Red Guardian astutely lured the Prince of Power into the Psychotron’s chamber. He then goaded the rash Hawkeye into making a stupid mistake and knocked him out.

With both attackers defeated, Colonel Ling expounded his plans for world conquest to the Soviet General visiting his base. He explained that what he needed was Soviet nuclear submarines to ferry troops and Psychotron projectors to the enemy. After that, given the sheer terror the Psychotron could blanket armies and population with, conquest would be trivial.

Readers are presumably wondering why a People’s Republic of China senior officer and a Soviet senior officer are working together in 1967. The Sino-Soviet crisis  is one of the key events of the Cold War, and by 1967 the Soviet embassy in Beijing was being attacked by Red Guards.

During the story, one gets the impression that neither Ling nor his Soviet counterpart are on the up-and-up and working through their normal chain of command. It all comes across as some kind of clandestine manoeuvring. Thus, it is possible that neither the PLA nor the Red Army are aware of what is going on.

It is thus likely that the plan was more a James Bondian plot than a Cold War story, with a few thousand Chinese and Soviet renegades planning to conquer part of the West Coast of the US and turning it into their personal realm.

The Soviet officer was interested. But he still wanted to know why the Black Widow had resisted the Psychotron, and requested a lie detector test. The Widow fooled the detector, insisting that she had never been a S.H.I.E.L.D. agent and remained a loyal servant of the USSR. Colonel Ling begrudgingly released her and placed her under the Red Guardian’s command.

Meanwhile the rest of the Avengers — Captain America, Quicksilver, the Scarlet Witch, Giant-Man (Henry Pym) and the Wasp (Janet van Dyne) — arrived. Hawkeye and Hercules’ capture left them little choice but to intervene.

Captain America was separated from the rest and the enthusiastic Soviet General had the Red Guardian engage Cap in a great patriotic duel.

The far more pragmatic Ling wanted to just take the Avengers down without playing games, but had to go along with his Soviet counterpart’s plan.

The Red Guardian was practically a match for Captain America, but Cap eventually gained the upper hand. Tired with this nonsense, Colonel Ling electrified the catwalk Cap was standing on, taking him down. The Red Guardian was furious, as he considered this to be dishonourable. 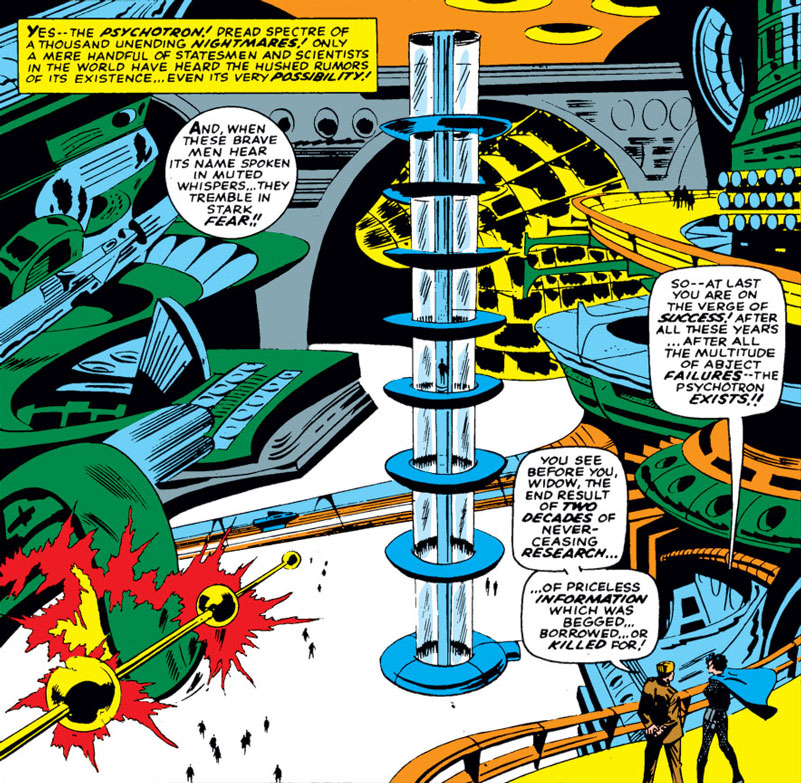 Meanwhile, Ling’s men were more or less holding the line against the Avengers. However, the Widow unexpectedly made her move to destroy the dreaded Psychotron. Ling opened fire on her, but the Red Guardian — Romanova’s former husband — reflexively interposed his body.

This gave the Widow time to set the Psychotron on fire and free Hercules before Ling could actually shoot her.

The Widow’s sabotage set the installation on fire. As the Avengers evacuated with their woundeds, the determined Ling grabbed a laser rifle and tried to kill Captain America as he was being carried away.

Incensed, the badly wounded Red Guardian body-blocked him and the stray shot hit nearby gas pipes. The explosions triggered a volcanic eruption and the base was completely destroyed.

For decades the Red Guardian was thought to have died in the conflagration, but he survived. Colonel Ling thus might have escaped the inferno too.

The colonel is a smoker. He is almost never seen without his favourite cigarette holder.

“We have no need to defeat him, fool ! Yet, for all his vaunted strength, he shall never bother us again ! Observe… and tremble !”

“It is with pleasure, comrade general, that I welcome you to my nation’s most secret base !”

“So… the Black Widow somehow deceived the lie detector ! Thus, I find her guilty of treason and sentence her to… death —!” (KRAK !)

“Whatever else may befall… even though the Psychotron itself be reduced to flaming ashes… CAPTAIN AMERICA MUST BE DESTROYED !”

Equipment:
He could access any weapon stored on his base – see the profiles below.

These soldiers are clad in special suits and use advanced weapons : 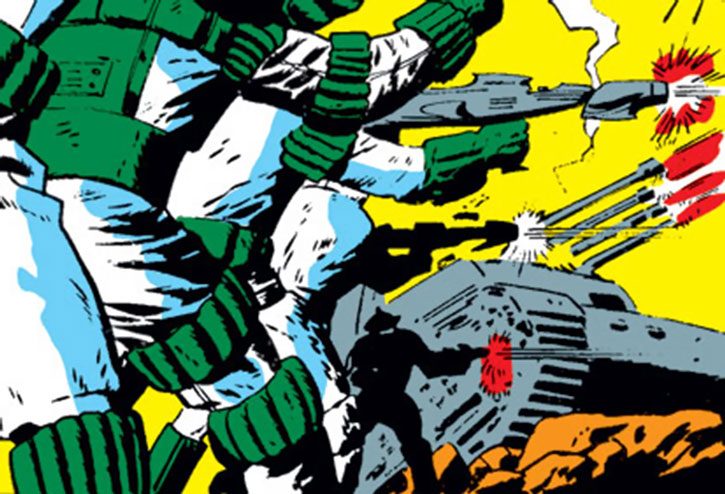 MARTIAN TRIPOD-LIKE ROBOT [STR 05 BODY (Hardened) 11, Growth: 07, Laser beam: 06, Running: 05, Note: Growth is Already Factored In, Laser Beam is fired with an Automatic Action but has an AV of 01 (it is a quadruple rotating array on top of the tripod). Note that the robot has arms with pincer-like “hands”.] 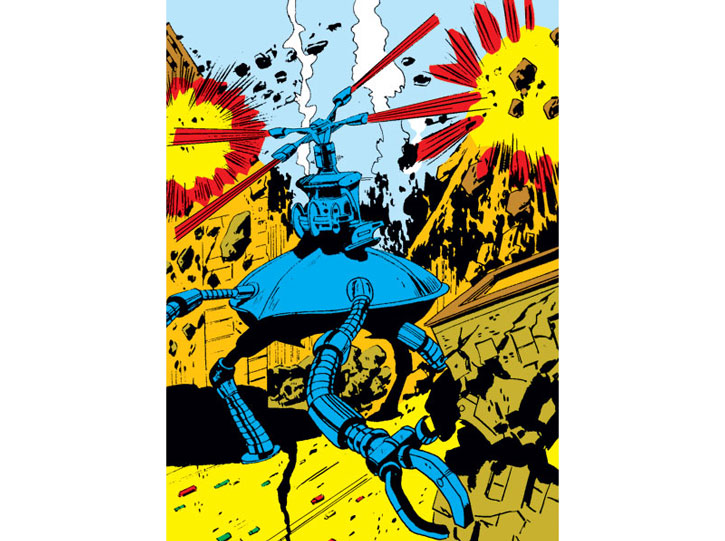 There’s a company of soldiers with standard uniforms and guns defending the base. Their stats are:

Features of Colonel Ling’s base

The documented features of Ling’s base were:

The Psychotron was a building-sized piece of machinery with extensive control consoles. It had Illusion: 14 – which could either be focused in a small room in the base (Area of Effect: 03) or broadcast (with a Diminishing Area of Effect, the strength dropping by one for every AP of distance from the Psychotron).

The illusions were apparently tailored to the targets, within the limit of available intelligence. The classic one was to project a tsunami, but it was also used against Hercules to convince him he was caught in an endless fight against the ever-regenerating Hydra of myth.

As for the Black Widow, she saw a horrible flaming face flying around her and shooting eyebeams at her while laughing a nerve-wracking laugh. 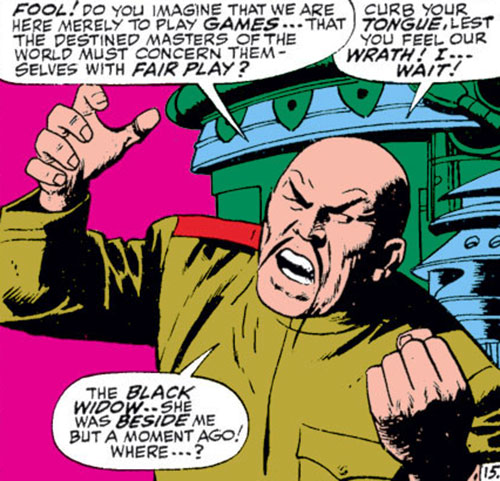 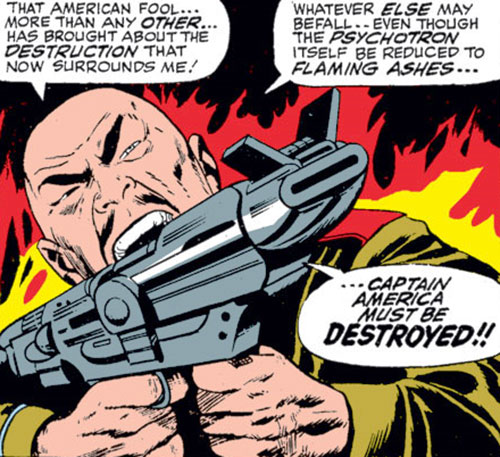 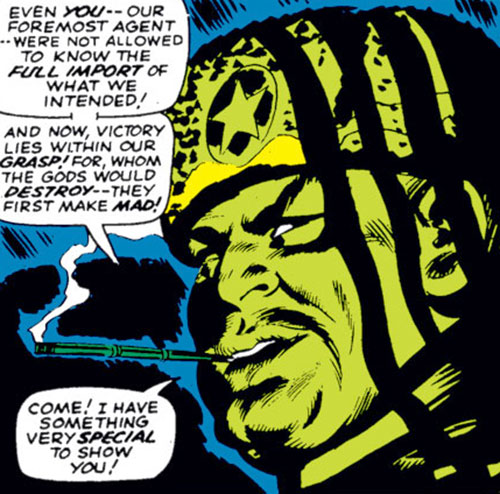 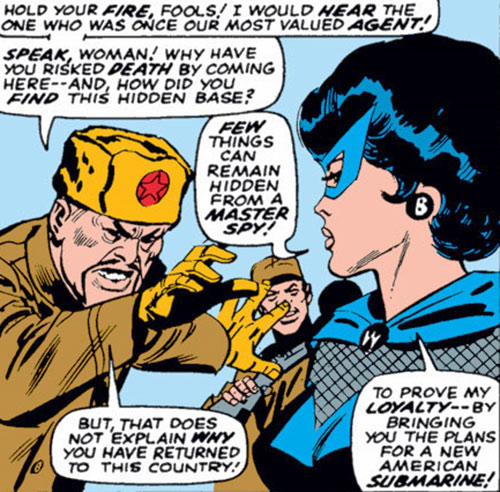