City of Heroes was an interesting super-hero Massively Multiplayer Online RPG, released in 2004. Despite an enthusiastic fan base, it was summarily shut down in 2012.

This character is an example of a Mastermind/Dominator (i.e., pets-centric) character in this game. He’s been fleshed out, but still can reasonably be used in all kinds of campaigns.

Colonel Saigon is an experienced military man skilled in demolition, leadership, marksmanship, stealth and hacking. His gang all all elite and veteran soldiers fully capable of standing victorious against superhuman opponents, monsters or other creatures. The members of the team have different useful skills.

Although he started out by adding various lethal gadgets to his combat répertoire, he eventually seems to have gained real powers of his own, these include:

The ability of flight can also be extended to anyone in his vicinity. Thus, the Saigon gang can perform aerial assaults on their victims, while protected by a following force field generator. Some of these abilities might originate from technological or magical means.

Lastly, Saigon and his men seem to have the capacity to return from death itself. Thus, it is a reasonable assumption that they all are, for some unexplained reason, immortal. They will never stay down long and even appear to age slower than others.

Saigon’s infamous gang is made up of soldiers of his old military unit. They are all relatively well paid. Crime does pay in this case.

As a result, all members of the gang are completely loyal. On the other hand they do have a tendency to flip out during combat, ignoring orders while they put down some enemies. That means it is hard to order them to cease fire after an attack order has been given.

In fact, all members of the gang are rather ruthless killers. That goes double for Major Paxton, the second in command. They are never hesitant to suicidally charge right at superior opponents.

Major Max Paxton is the main combat man and the second-in-command. He brings the really heavy firepower and he does so with unusual glee and fondness. In fact, once he starts his work, he is hard to stop, and then in particular if given the super-soldier serum right before combat.

He possesses heavy firepower at both ranged and close distances, and so is often the one who will start by softening up the opposition. The Major is so tough that he doesn’t need any protective vests.

Private Schmidt and Corporal Johns, on the other hand, are cannon fodder. The team also includes marksmen Captain Orson and Lieutenant Hill, and Medic Williams.

Williams is surprisingly fond of punching the opponents, and so, being at the front, is often the first one to die. He seems intent on doing combat most of the time instead of healing up his allies. He prefers to perform his Medical buff shtick on the most powerful ones on the team, in this case Saigon and Paxton.

Strangely enough, when a soldier dies in his line of duty, he will usually appears alive again during the next adventure or around the corner of the current adventure. Perhaps the gang is truly immortal. Or perhaps the fallen member is replaced by a name-sake with similar abilities although that seems unlikely.

Either way, Saigon doesn’t care as long as the mission is carried out successfully.

If they are immortal, this is well represented by Invulnerability of 16 APs for Saigon and his men. In fact, there exists the risk that Saigon himself, for some reason, does not himself have the Invulnerability power at all since he, unlike his men, often uses the emergency hospital teleporters to get out of sticky situations.

Previously, Saigon used to hide a small, but powerful explosive device in the backpack of each henchman (Bomb of 10 APs, in DC Heroes terms), to be detonated by remote-control at the appropriate moment, taking out enemies close to that henchman, along the exploding henchman.

However, this was unusually ruthless even for Saigon, and the men started to distrust his leadership. So that tactic is no longer being used in the field.

Colonel Saigon is a ruthless and old ex-military. He uses military tactics, techniques and discipline to get rich on crime. He seems to have been present in ’Nam during the war, and has in highest likelihood participated in several campaigns and wars all over the world.

After having served in the US Army for many years, he retired and decided to get rich and powerful by using his military skills to perform crime, starting with bank robbery, kidnapping and extortion.

At some point in time the gang was captured and sentenced to life imprisonment in the prison known as the Ziggurath. The Arachnos, as ordered by their leader Lord Recluse, liberated Saigon and gang from prison as his services were required.

They have since remained free and at large. There were also some rumors along the ranks of the Arachnos that Saigon might be someone called the Chosen One, but Saigon himself never cared for any of that gibberish.

The Saigon gang started taking on tougher and tougher missions, working as mercenaries. Saigon himself started a network of mighty villains named Caution: Supercriminals and still cooperates with them on occasion.

Although they all started out as normal humans, they now seem to have developed several metahuman abilities of their own during all the adventures being blasted by radiation, being exposed to toxins, radioactivity and super powers.

In fact, each and every member of the team seem to have become immortal at some point of time. Regardless of the damage they take, they always soon return to adventuring. The age of the members are unrevealed, but it can be assumed that they are older than they appear to be.

The Saigon Gang has fought the police, the law-enforcement agencies, the military and all the major heroes of Paragon City, including members of the Freedom Phalanx and the Vindicators. They have also clashed many times with:

The Saigon gang has participated in mythic tales where they:

They once even traveled forward in time and defeated mighty Lord Recluse himself, thus changing the course of history, actually saving the world instead of letting it fall into peril and chaos.

The gang has also spread mayhem in Paragon City itself by robbing the banks, burning down buildings, kidnapping important people, liberating villains from the prison and many other evil things.

As if all of this wasn’t enough, he and the gang have also single-handedly defeated the legendary archvillain known as the silver Mantis all by themselves, a feat that earned them quite a reputation.

Saigon himself worked for the mighty villain named Scirocco and from him taught how to project force fields around his own body. The members of the Saigon Gang are now revered villains and very well-known threats in the world of Paragon City.

It is verified that they keep a nuclear missile hidden for future havoc. It is assumed that the gang has vast, hidden treasures at this point in the careers, and that they continue with their criminal activities on the Rogue Islands for the hell of it.

Colonel Saigon started his career in his military fatigues complete with combat boots, a utility belt and a beret.

His costume has evolved over the years, becoming more and more supervillain-like, by adding edgy pieces of cloth over the shoulders, streamlining the costume to skin-tight black leather, and even adding a large cloak with a large dragon-motif on the back of it.

Saigon an old disillusioned ex-soldier, now a mercenary, that believes in the anarchistic rights of the strong. He is entitled to have it all. Although temperamental, he carefully plans heists and get-rich-quick-schemes to be carried out together with the old soldiers from his military unit. Elite soldiers shall always prevail against metahumans, he uses to say.

He is exceptionally fond of gunning down heroes in all shapes, as well as witches and psychics, but monsters and fellow villains will also make do.

After robbing the bank he usually spends time reading classic English literature, while sipping some whisky and puffing on fine Cuban cigars. The unit spends their time training during these breaks, of course.

Advantages:
Area Knowledge (The Rogue Islands), Connoisseur, Expertise (Computers), Henchmen (see below), Iron Nerves, Leadership, Notoriety, Rank (Colonel, retired), Shtick (Master of gadgets; Saigon is allowed to spend HPs equal to up to the value of the Attribute value, Power APs, AV, EV, OV and RV of any of his or his men’s gadgets, as if they were extensions of himself, regardless of which genre he currently plays in), Slowed Aging.

“Time for a little wetwork.”

“Are you blind ? There is nothing there !”

Drawbacks:
Serious Rage (he must be insane !). 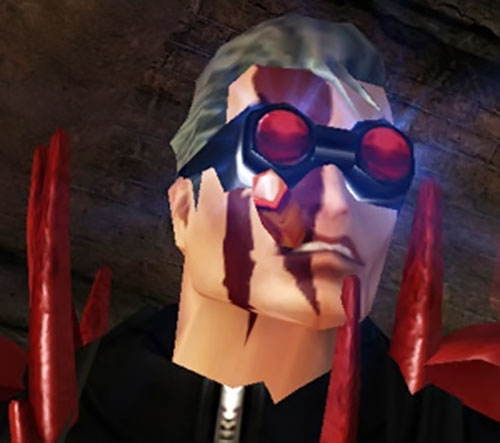 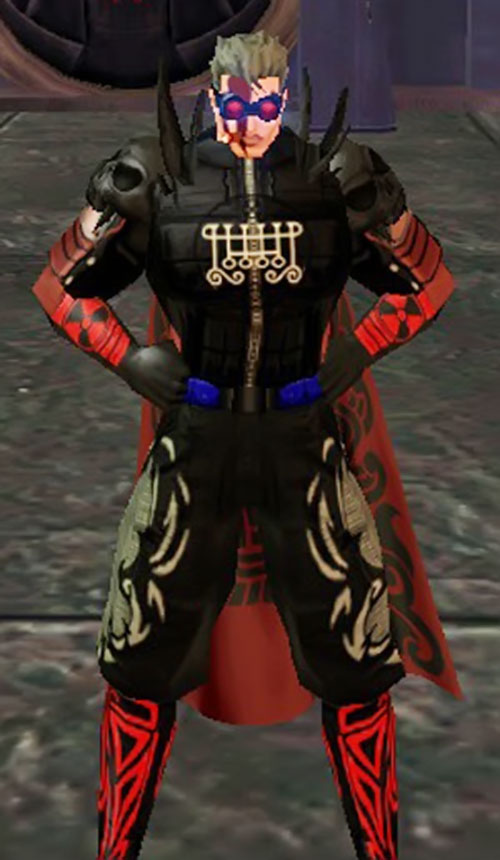 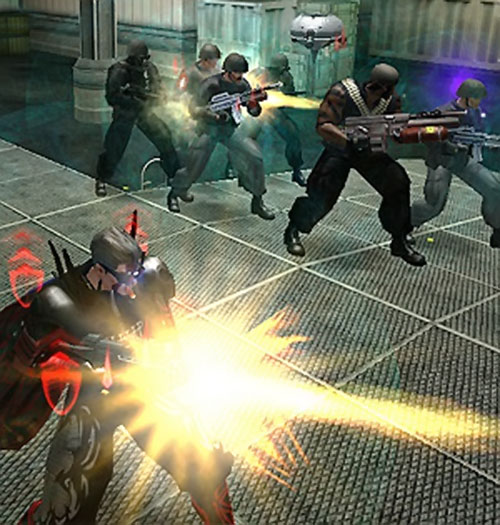 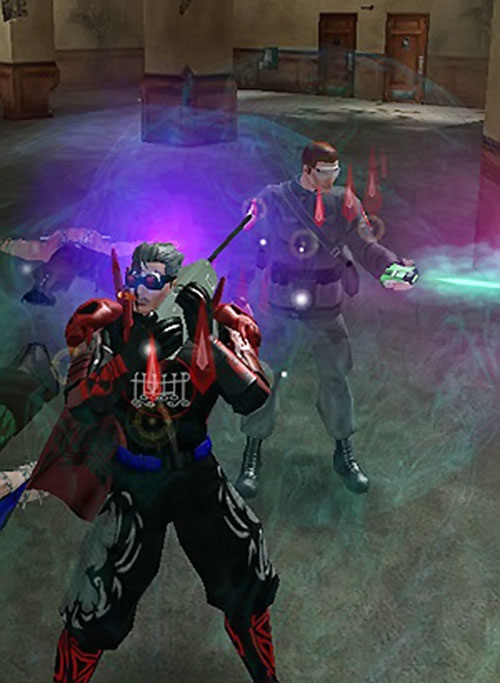 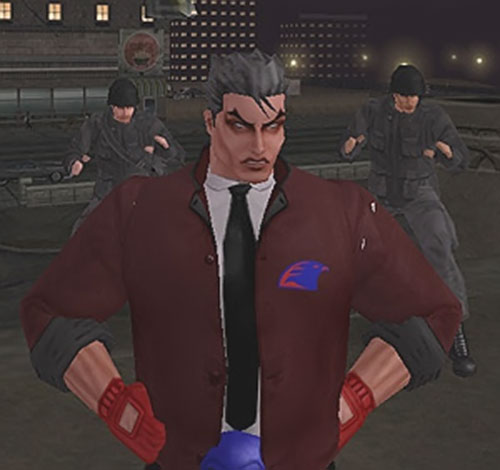 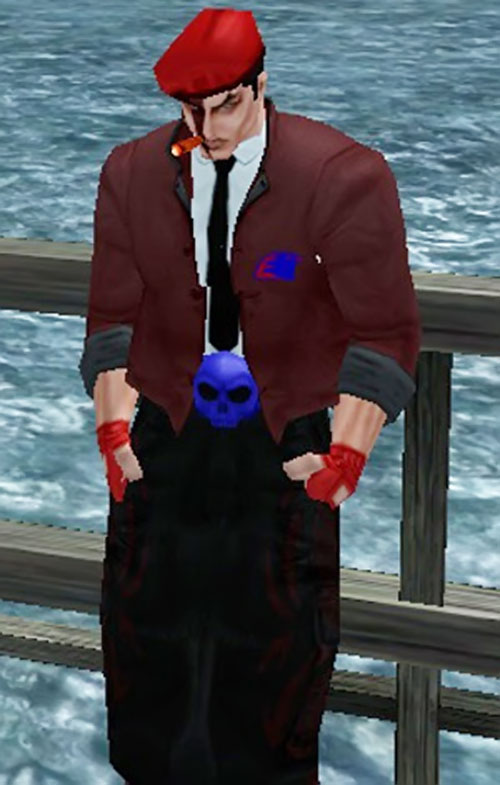