Colonel Sulphur is a very minor Batman enemy, first seen in 1972. Nobody cares about him.

Nobody but us, the last line of caring.

Colonel Sulphur is a surprisingly fast athlete, an experienced hand-to-hand combatant, and a veteran spymaster.

One of his gimmicks is his artificial right hand. This fully-functional prosthesis can be locked in a rigid position to deliver powerful karate chops. And a sturdy switchblade can extend from the fingers for even greater lethality.

While Sulphur seems to be deadly against ordinary opponents, he’s completely outmatched by the Batman in terms of both planning and fighting. But then, who isn’t ?

Sulphur’s experience in espionage makes him canny and careful. Some examples :

Pretending to flee and immediately setting up an ambush is a common tactic of his. It is made feasible by the startling bursts of speed he’s capable of.

Sulphur usually hires local thugs with handguns to serve as footsoldiers for his operations. He usually doesn’t carry a gun himself.

He kidnapped the young wife of a milquetoast employee at Gotham’s federal building. This forced this man to steal the documents. But Batman interpreted a clue at the crime scene (a piece of silver which could only come from the Paris School of Diplomacy graduation ring !). Which led him to said milquetoast employee.

Batman was almost knocked out by the doorman there. But the vigilante deduced in the nick of time that it was a disguised thug (because he was wearing ill-matching argyle socks under his uniform, something unthinkable in this neighborhood !). Batman then knocked out the thugs who were discussing with the employee to get the documents.

Sulphur phoned in, and the Batman answered while faking his voice. But he didn’t give the password, thus allowing Sulphur to deduce Batman had the documents !

Colonel Sulphur was going to kill his hostage. But Batman barged in and saved her just as the sun rose. After hearing subway noises while on the telephone with Sulphur, the Bat had deduced he must have been hiding in an hotel near the el’s tracks !

Sulphur was somehow free within a handful of months. He read about an American sailor who had been a traitor during WWII, and was to be released after 30 years in prison for cooperation with Imperial Japan.

According to the rumour, the traitor had been paid with a huge diamond. Sulphur and some hired thugs kidnapped the man, who admitted that he had hidden the gem on the hulk of the ship he had served on, the USS Lake Oshkosh.

Sulphur, holding the middle-aged traitor at knife point, sneaked onto the derelict ship via submarine to recover the diamond. But he was met by Batman, who had deduced what was going on !

Batman made short work of Sulphur. Meanwhile, the traitor panicked after experiencing hallucinatory flashbacks. He accidentally fell to his death whilst attempting to flee from ghost Zeroes.

In 1980, Colonel Sulphur was hired to steal a strategic formula of rocket fuel. It was protected by intricate security, and had further been cut into four parts. Sulphur could do intricate just as well, and stole two of the four parts of the documents.

To get the third, Sulphur kidnapped a scientist, Mr. Danvers, and murdered a government investigator. However, Mr. Danvers’ adoptive daughter Linda was secretly Supergirl. When she couldn’t crack the mystery of her father’s kidnapping she teamed up with Batman.

Batman and Supergirl tracked down the third part of the formula – but Sulphur had deducted they would ! He had a decoy plane fly over his hideout, knowing that Batman would ask Supergirl to shadow it, then gassed Batman unconscious.

He left Batman and Mr. Danvers tied on a booby-trapped metal plate, which was set to detonate when the sun would rise. As you have probably deduced !

Sulphur was escaping by submarine, but Batman deduced that ! The getaway sub was easily intercepted by Supergirl, and Sulphur wasn’t seen again for two years.

When he came back, Colonel Sulphur had been hired as one of General Scarr’s top agents, along with Captain Cutlass and Major Disaster (can you deduce the pattern here ?). This army of crime ran a series of kidnappings of wealthy Gothamites to raise money. The goal was to buy a cache of weapons left behind by the alien Weapon-Master.

Sulphur apparently chiefly gathered intelligence on the kidnapping targets. Meanwhile Cutlass did the field work and Major Disaster warded away the police and super-heroes. Sulphur also negotiated with the Metropolis mobster who wanted to sell the weapons.

Warned by Batman, Superman interrupted the sale in Metropolis. The wily Sulphur rushed to grab one of the Weapon-Master’s armament at random and threw it at Superman. It was a Duranian time-bomb, and Superman was cast out of the time stream. Yes – Colonel Sulphur had apparently destroyed Superman himself ! 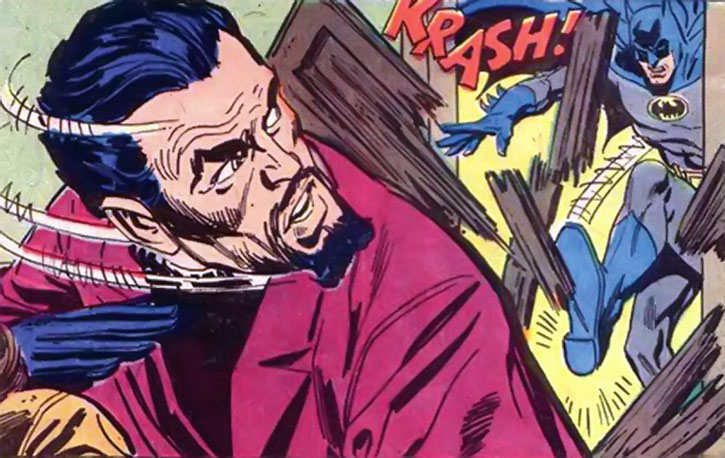 While General Scarr was preparing an assault on Metropolis, his scientists had deduced the function of some of those weapons. He detailed Sulphur and a technical crew to operate those. Sulphur thus fired a neutralising weapon from a skyscraper, shutting down all power and engines it shone its beam upon.

However, Batman and Superman foiled General Scarr’s plot, and Batman arrested Sulphur before he could use another time bomb against Superman.

Colonel Sulphur was never seen again – but you had deduced that !

Usual illustrations, plus a close up on his switchblade – but you had deduced it !

He’s scheming, he’s vaguely foreign, and he has a weird, insane taboo – he can only commit acts of violence when the sun is just rising. He considers that this time “brings him luck” and allows him to “escape punishment”.

Though he seems suave and professional, he’s really a violent madman – as you will be able to deduce from his stats !

“I have a fetish about sunrise ! I believe the rising of the sun brings me luck ! Thus, to escape punishment, I commit no acts of violence except during the morning’s earliest minutes ! A physician once called me insane… correct verdict, I fear ! Ahhhh… I see by my excellent American watch we can expect the sun within the hour !”

“You had better hope that [your husband cooperates], my dear — or you will not see tomorrow’s sun rise ! Consider this a vow — and be aware that Colonel Sulphur is famous for keeping vows !”

Drawbacks:
Minor Rage, Misc.: can only commit acts of violence within — roughly — plus or minus 15 minutes of the sun’s rise 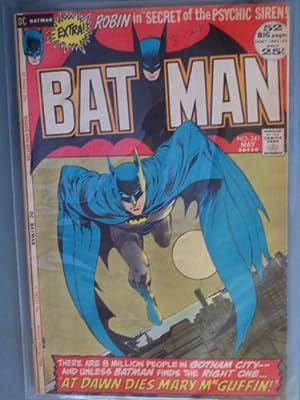 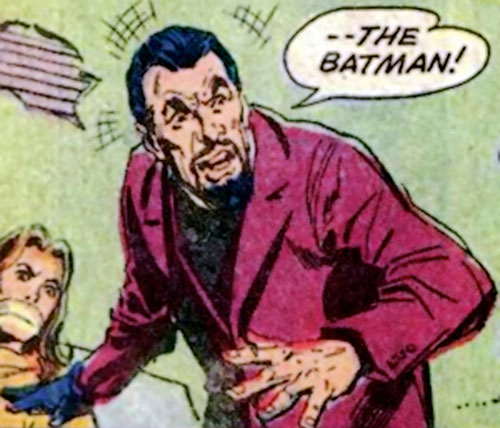 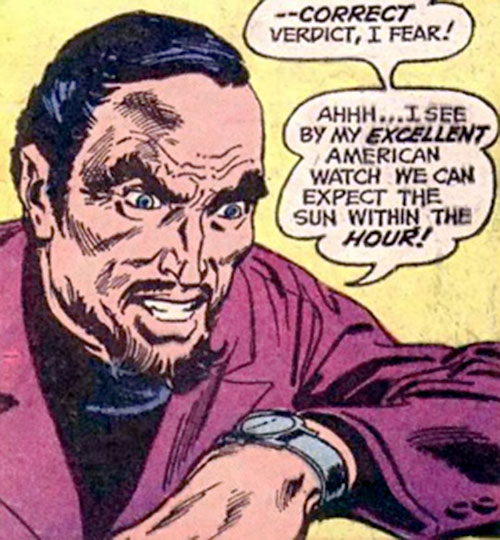 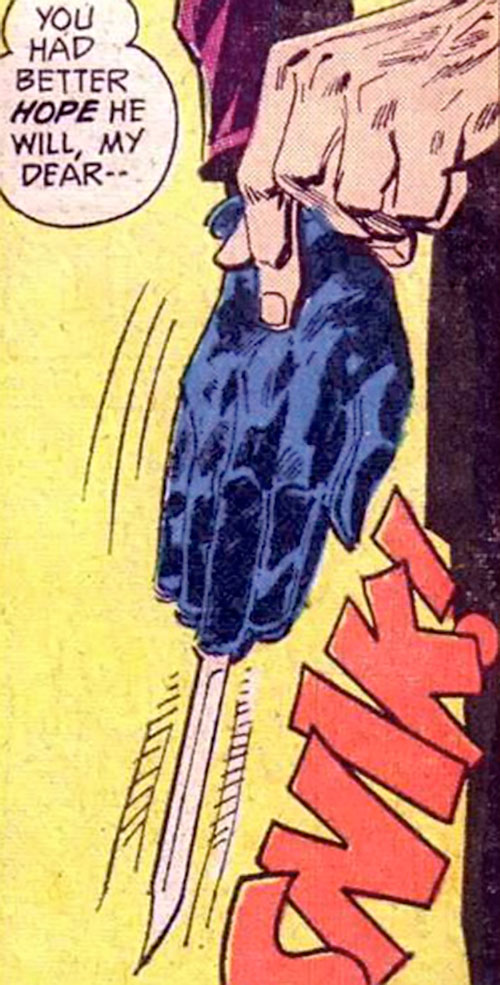