Comanche is a veteran street hoodlum, able to conduct successful crime sprees – especially if he’s working with Shades. He’s adept with a shiv or a pistol, and he ain’t afraid to use ’em. Comanche is the brawn of the duo.

After being equipped with special gear, he also became a competent archer, firing multiple arrows at the same time and the like. Comanche only started using his bow when he received special arrowheads. Before that, a gun was simply a better choice.

Comanche also carries knives and ordinary arrows. But though they’ve been given game stats just in case, he never actually used those during his appearances.

See the entry for Shades.

Unlike Shades, Comanche never returned to the straight and narrow. He remained a costumed criminal. He’s currently a member of a new version of the Rivals mob, which includes a number of… flamboyant criminals from the heydays of Harlem, such as the current Mister Fish, Spear, Cheschire, the current Chemistro, “Cockroach” Hamilton and perhaps others.

The Rivals answer to the criminal genius Nightshade, though they call her DNS (short for Deadly Nightshade, an old variant over her codename, and presumably a joke about Internet architecture).

Comanche always wears a headband with a vaguely American Indian tribal pattern. This is presumably why he was nicknamed “Comanche”.

Comanche is more of a follower – it’s Shades who usually takes the lead. See Shades’s entry for more about the duo’s modus operandi. Comanche seemed bitter about his buddy Shades’s death, and irrationally blamed his decision to forego their criminal lifestyle for it.

“Shades… I ain’t felt this good, with this much stash in my slide, since I busted outta Q back in ’60”

“We look like a couple ’a cats outta the Village in these vines !”

“Right on Shades ! We’re gonna be the kings of Harlem !”

The stats above are for the trick arrows Comanche used in his vintage appearances. He now uses more powerful trick arrows (perhaps 4 or 5 more APs) and is skilled enough that his arrows have the Dart Bonus. 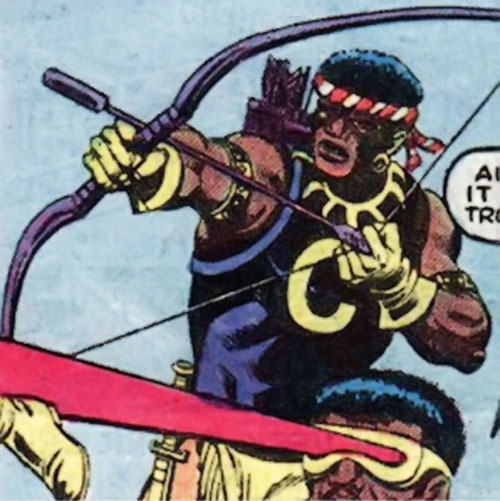