Kraken is now stronger, heavier and crazier – and much more of a menace, physically.

He has been cybernetically enhanced. But it is difficult to benchmark him since Iron Man’s armour was heavily damaged when they fought.

Kraken withstood punches that flattened his men, didn’t seem affected by pain, and could swing his cutlass with great force. We peg him in the borderline superhuman/enhanced human strength grey zone, though this is tentative.

Kraken’s main weapon is a pirate’s cutlass. It can deliver powerful electrical shocks on impact, or even shoot them as short-ranged bolts.

It seems likely that the electricity is actually generated by Kraken’s cybernetics and conducted through the cutlass. Which means that he could electrocute people with a touch even without his sword. But this is not demonstrated in the comics, and chiefly based on the precedent of his hook.

The highly polished cutlass also includes micro-circuitry that can reflect some types of energy attacks like a mirror might. Kraken stated that it could even amplify such reflected energy. It worked fine against Iron Man’s repulsors.

The cutlass was broken by Iron Man and may never have been replaced.

Kraken also carries what seemed to be a flintlock pistol, but was actually a potent energy weapon. This is his backup weapon, since the cutlass is better at common fighting ranges.

I’m a sailor peg and I’ve lost my leg

Kraken’s cybernetic augmentations are not generally visible, though his hands would presumably look artificial were his gloves removed. The exception is that his lower left leg was replaced by a technological peg housing a jet engine.

The jet can propel Commander Kraken in the air. This is often used to dodge attacks. It is possible that the jet allows full flight and/or hovering, though that wasn’t demonstrated. Landing after a jet-jump didn’t seem to be a problem (as it would be with a normal peg leg). Generally, this prosthesis does not seem to hinder him in any way.

The jet’s exhaust can be used as a potent weapon, though that takes slightly contrived circumstances. For instance a person right under a jet-jumping Commander Kraken. Or the Commander laying on his back as an opponent closes in on him.

The Albatross looks like an antiquated brigantine  and thus not much of a threat. Yet she is armed with energy cannons and can transform into a high-tech submarine within seconds. 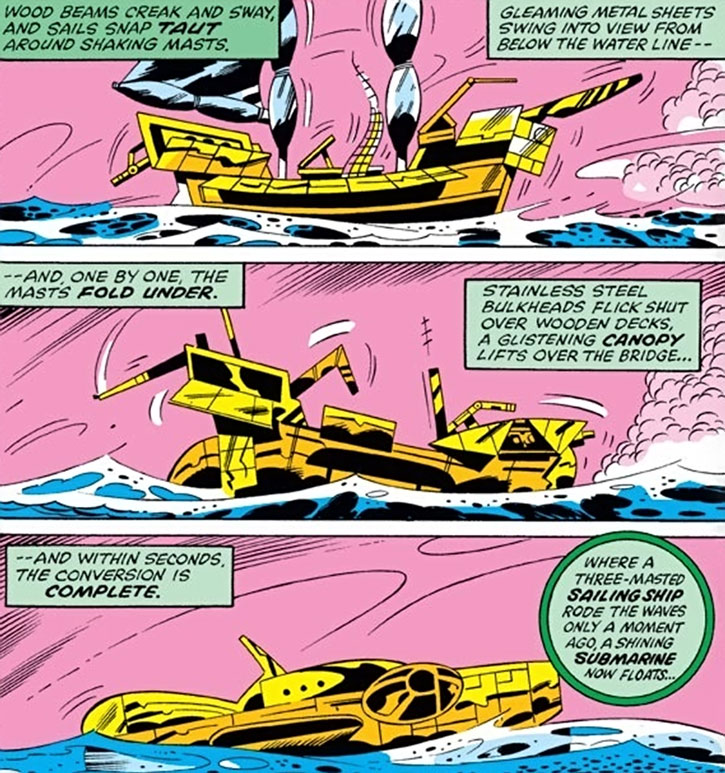 In sailing ship mode, she is apparently a full-on replica of a period ship. She even has a traditional figurehead on the prow, and the surfaces are made of actual wood. The Albatross is mistakenly described as three-masted. This is probably a misunderstanding of the fore-and-aft rigging scheme, since brigantines have two masts.

The Albatross has a large propeller hidden under the waves. It’s there even when she’s still in sailing ship mode. She also can shoot powerful, large torpedoes to dispose of unwanted ships. Oddly enough, ships sunk by these weapons left no debris floating on the surface.

The Albatross’ energy cannons — which presumably resemble black powder 8-pounder guns — are remarkably accurate. they likely have some sort of long-range sighting system.

Kraken also has a gigantic undersea base. It was a full-scale Hydra installation with hundreds of men and vast high-tech arsenals.

As the chief of the Naval Action Division, Kraken apparently operated chiefly in the North-Eastern Atlantic from a secret British base. He proudly flew the Jolly Roger on the Albatross.

Kraken also had ex-Hydra scientists cybernetically augment him along a piratical theme.

The pirate schemed to use the advanced technology in his base to gain even more power. His goal was to kidnap more scientists and engineers, and brainwash them using a Hydra machine (the “cerebro-scan”). The now-docile prisoners worked on building more weapons and vehicles for him.

In the thrall of megalomania, Commander Kraken envisioned a pirate fleet able to take on any nation’s naval forces. He did seem to have a good force already, with advanced armed vehicles.

I am Iron Man

Kraken kidnapped two close collaborators of Tony Stark – Abe Klein and Krissy Longfellow. The goal was to lure Iron Man close to his base. Kraken had deduced that Iron Man was secretly Tony Stark, and wanted Stark to produce weapons for him on an industrial scale in exchange for keeping Abe and Krissy safe. 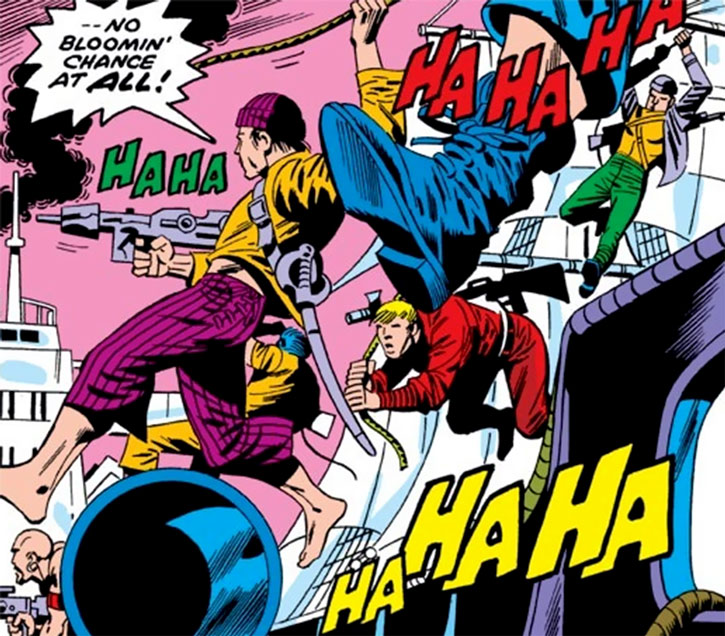 Kraken captured Iron Man (whose armour had been severely damaged during orbital tests). He deprived him of his armour and let the industrialist go, waiting for him to comply with his demands.

However, Stark immediately doubled back. He located the sea cave where Kraken hid his base, sneaked back in, reclaimed his armour and freed his two colleagues. During a confrontation with Kraken, the pirate had the upper hand. But he accidentally shot some key system. The base was soon rocked by explosions and destroyed.

Kraken briefly seemed to have drowned as his peg leg was trapped in a crack. But everyone actually survived.

Scourge of the five lakes

According to secondary sources , Commander Kraken never managed to rebuild his power base after this defeat. It seems likely that he lost all his special weapons when his ex-Hydra undersea base was flooded. It is also possible that he had to hit the mattresses to avoid Hydra retaliation. 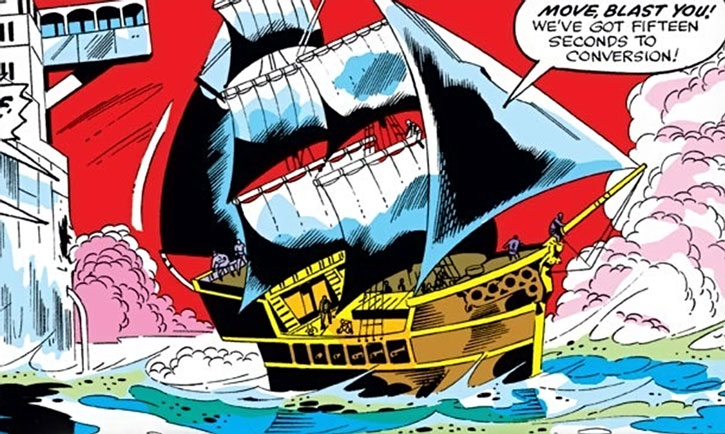 He reportedly became a pirate operating over the Great Lakes in North America. He presumably preyed on small-ish vessels with a limited crew and ordinary weapons. He kept the Commander Kraken name and clothing, however. Kraken likely still had some working cybernetic enhancements.

During the mid-1980s, the Scourge of the Underworld murdered a number of has-been super-criminals. Many grew concerned, and Firebrand (Gary Gilbert) organised a meeting to strike back.

Commander Kraken attended. The meeting took place in a Bar With No Name, where Kraken was reunited with El Jaguar, who also had been a division chief of Silvermane’s Hydra.

Unbeknownst to Gilbert it was a trap. The criminals present were all gunned down by the Scourge of the Underworld.

Commander Kraken’s shade was much later seen in the underworld, specifically Pluto’s Hades. After the considerable upheaval in 2009, it is possible but unlikely that he and several other villains may have broken free.

Stark suspected that Kraken had been mentally affected by his cybernetic enhancements and had become a megalomaniac. He was probably right.

Kraken’s plans drifted toward world domination as a global warlord and “King of the Sea”. It also increasingly included megalomaniacal ravings. His condition was vaguely reminiscent of the cyberpsychosis described in older cyberpunk RPGs .

He also started using movie pirate lingo, by Krikey, as well as forced Britishisms suitable for a pirate in a C-list pulp novel. It was clearly an affectation. He would sometimes drop the patois then resume it to get in character.

Kraken had an unhealthy intensity about him. He welcomed conflict and violence. While he was not as smooth as he used to be, he hadn’t really lost his cunning. He still laboured to find ways to have useful people work for him, as he did when he attempted to recruit Namor.

Though in 1976 he seemed on his way toward full-blown insanity, in 1986 Commander Kraken appeared collected and in control.

“You’ll do nothing, you bilge-bloated maggot ! I let no man treat me the way you did !”

“Prepare for immediate conversion, or by Krikey we’ll all join that rust-coated Iron Man in Davy Jones’ locker… and wouldn’t that be a bleedin’ shame ?”

“Kraken was born to rule !”

Bonuses and Limitations:
Skin armour only vs. blunt/unarmed damage.

In 1986, Kraken’s facial scarring had faded by about half, his right eye seemed functional, and he seemed psychologically stable (though still talking like a cliché pirate).

On the other hand his Wealth may have been about 004.

His peg leg was still there (though the jet action may have not). Bt it likely used commercial equipment rather than any Gadget at that point. 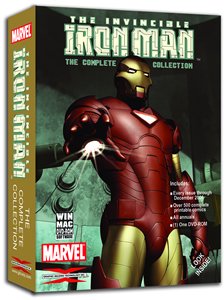 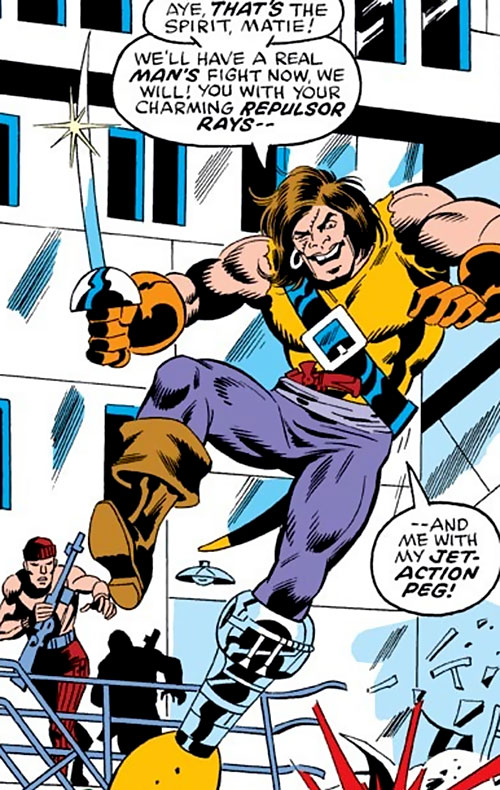 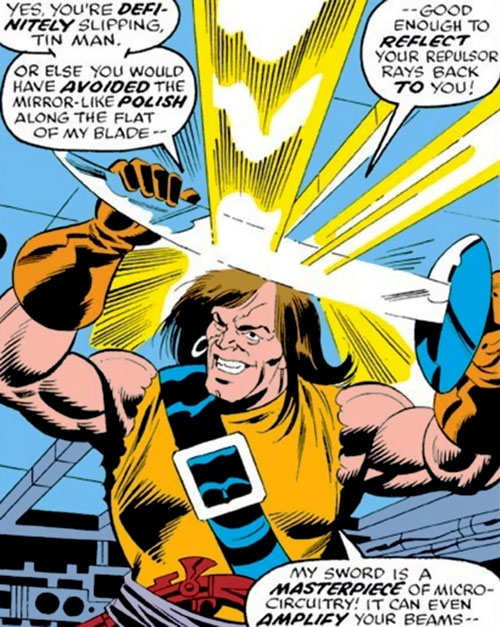 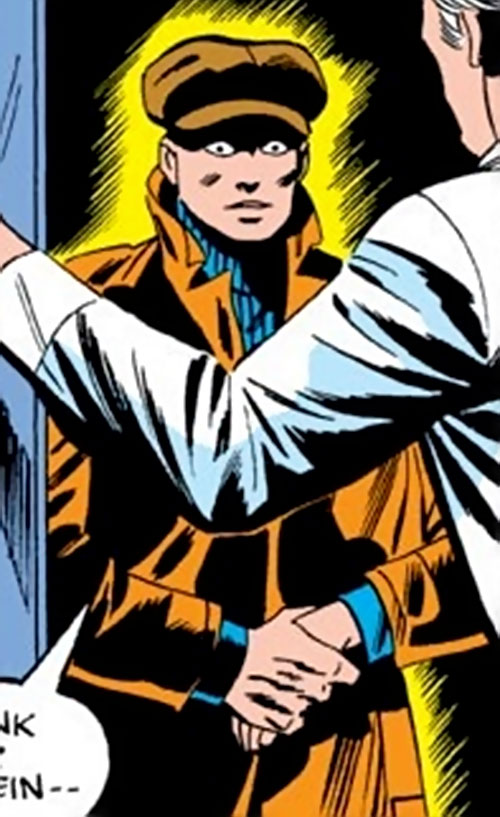