Kraken is physically adept, and is a fairly large and strong man. His electrified hook could stun even a robust person.

He was an OK crimelord and criminal manager, taking sensible decisions. However, he often lacked important information when designing strategies.

Kraken employs pirate crews armed with energy weapons. Yet these weapons have the stats of normal guns (they appear to shoot concussive force), and the men have basic thug stats. Many also carry low-tech melee weapons such as cutlasses and knives, useful for fighting in close quarters.

The first vessel operated by Commander Kraken was a radium-powered submarine… built in the likeness of a giant squid. Even Namor didn’t realise at first that it was a machine. He even hit it several times before he truly suspected the truth. Presumably there’s a thick rubbery shell around the sub itself, with a realistic paint job.

The immense tentacles are fully functional. They are, in fact, the primary mode of attack. The sub stays under the waves and uses a few tentacles to cripple even large ships, then drag them underwater for pillage. The tentacles are 100+ metres long, and can easily crush bulkheads. They are also agile enough to catch man-sized opponents in flight.

Naval cannons lie inside the eyes. However, one assumes that firing them would wreck the illusion of the sub being a sea monster.

The first such ship was destroyed by an actual kraken  in 1970. A replacement was available in 1972, though it apparently wasn’t finished. What happened to that ship is unknown.

It was implied that keeping the sub running required regularly stealing high-quality radium .

Commander Kraken first surfaced in 1970, running a piratical operation in the Mediterranean. He sailed a radium-powered submarine disguised as a colossal squid. His victims assumed that they had been sunk by a sea monster. As Kraken expected, Namor the Sub-Mariner was accused of being behind the attacks, having a long history of employing sea monsters against surface folks.

Incensed, Namor investigated. From there, he arranged to be on the next ship attacked by the “sea monster”. However, he was defeated by the powerful submarine. Kraken further captured both of the Sub-Mariner’s romantic interests, who were both present on the scene – the Atlantean Lady Dorma and the surface dweller Diane Arliss.

Kraken wanted to offer an alliance to the Sub-Mariner, whom he assumed was a criminal and renegade like himself. Nevertheless, he was careful to keep Namor dry after he was brought inside the “squid”.

Yet, he underestimated Namor’s strength. Namor escaped, pried the Lady Dorma’s ship from the sub’s powerful tentacles then swam away. Kraken’s submarine gave chase, but it was a trap. Namor led them right to the lair of an actual kraken, whose existence he had discovered some months before.

The immense octopus dwarfed even Kraken’s nuclear submarine – and crushed it open in seconds. Commander Kraken was the only survivor, fleeing in a hidden pocket submarine.

Kraken spent two years recruiting a new crew and building a new giant-squid-like submarine. He sailed it along the St. Lawrence to Lake Michigan to finish preparing it. There, he soon discovered a base hidden on the bottom of the lake. He and his crew sought to capture it.

The Cat (Greer Nelson) was coincidentally present. She helped the base’s personnel repel the pirates, forcing Kraken to flee. As it turns out it may have been for the best – the hidden research base was manned by disguised space aliens. These soon rocketed off as their security had been compromised by Commander Kraken.

During the mid-1970s, mobster Silvio “Silvermane” Manfredi took control of a major Hydra splinter group in the US. These agents of Hydra wanted to operate in a more pragmatic and less ideological way. And Manfredi was a veteran Maggia figure with experience with super-powered operators.

One of Manfredi’s decisions was to hire minor super-villains to direct various divisions amidst the splinter Hydra. Commander Kraken was hired to head the Naval Action Division. Its size and assets weren’t shown, but it apparently scoured the Atlantic Ocean.

However Manfredi was fighting outside of his weight class. His Hydra fraction was soon steamrolled by S.H.I.E.L.D., along with costumed allies such as Daredevil and the Black Widow. Kraken was far away, though. So that just gave him the opportunity to take over part of the ex-Hydra resources for his own goal.

He also had the time to use Manfredi’s money to have a new ship, the Albatross, built. Furthermore, Kraken had the ex-Hydra scientists turn him into a cyborg, which damaged his sanity.

At this point, he was essentially a different character. See the second part of this profile for more.

Originally, Kraken was making a big deal out of being some sort of gentleman pirate lord brooking to no law and being the sole master aboard. He wanted to project the impression that he was some sort of modern Captain Nemo, a man of wealth and taste taking destiny in his own hand in a swashbuckler-like fashion. He *hated* it when Namor questioned his upbringing.

Kraken used nautical vocabulary and operated as a pirate. But he didn’t make extensive use of pirate-isms (or rather, common nerdy notions of pirate-isms) in his speech. He was more akin to a warlord-entrepreneur, trying to develop his power base and looking for assets that would make him even more feared.

It is possible that Kraken was British.

In any case, he had a definite pulps /Golden Age  villain influence.

“You’re hardly in a position to bandy about vituperous threats, my friend ! I have long expected that you would seek out the sea-beast that had invaded your realm — and I was prepared for you !”

“You fools ! Can’t you see he’s on his last legs ? Deprived of water, he can’t stand long against the lot of you ! The next ship’s cargo to the man who blasts him !”

Alternatively Commander Kraken can easily take the place of Cutlass Charlie and/or Captain Demo. Both were Pulp/Hollywood style pirate Aqua-villains.

Charlie was an “Aquaman foe” in an issue or two of Justice League of America where each Leaguer faced off against one of their own villains. Ocean Master and Manta hadn’t been introduced yet and someone must have forgotten about the Human Flying Fish and “Shark” Norton. So an Aquafoe was invented for the Sea King.

Captain Demo was the villain in the first comic book Vinnie ever bought with his own money (read “allowance he had earned with good grades”.) Kraken has the same kind of MO and silly pirate gadgets as these two losers.

Lastly, all three of them could be former henchmen (or even offspring) of the Golden Age Aquaman (in Post-Crisis DCU: Neptune Perkins – in an Amalgamated Marvel/DCU: Namor) villain Black Jack the Pirate.

Source of Character: 1970s Marvel Universe (Sub-Mariner and The Cat). 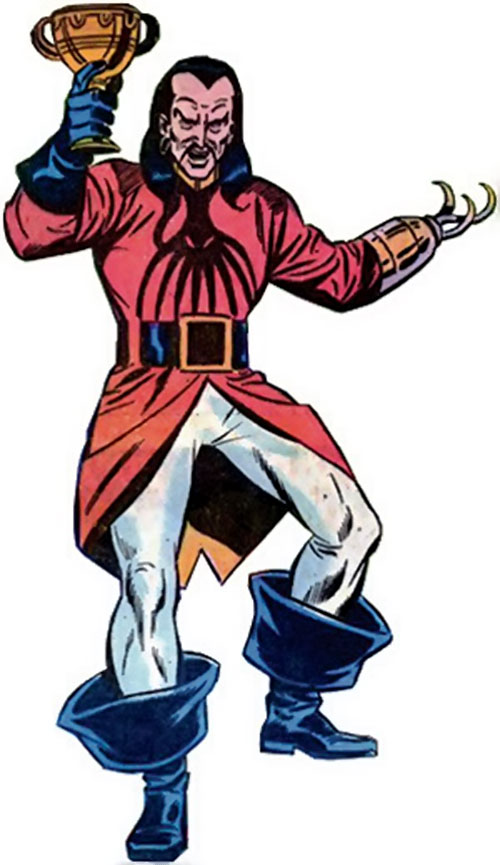 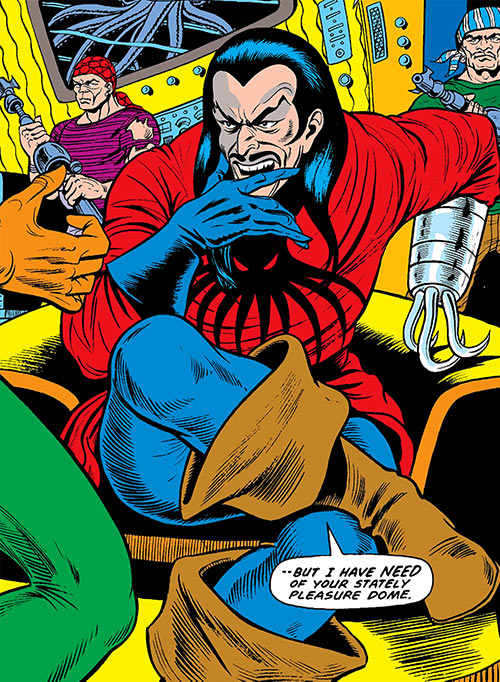