Shran is a Star Trek character. Specifically he was featured in the Enterprise TV series that ran from 2001 to 2005. Shran is a fan favorite and hero of the Federation!

Commander Shran is a well-trained and tough-as-nails military man with a multitude of skills.

Andoria is an icy moon, circulating the planet Andor, naturally inhabited by the Andorians and the subspecies called the Aenar, a race of blind telepathic pacifists. They all live in ice caves.

The Andorians employ the code of honor called the Ushaan, which regulates conflicts of interest through a melee duel to the death, and which has hundreds of pages of strict rules and exceptions. The Andorians have a higher than human metabolism making them very energetic but fast tiring.

The following descriptions are hypotheticals as found in various other Star Trek-related sources, but could be adopted by any Andorian appearances in a game as the GM sees fit.

Commander Shran, the Andorian, hails from a military family. His older brother joined a forward surveillance unit and Shran entered the military after school. In 2142 Shran eventually got promoted to commander of the Andorian warship Kumari as part of the Imperial Guard.

The Andorians had earlier been at war with the Vulcans and suspected a Vulcan outpost, a monastery, of actually being a spying station. Thus, Shran led a commando team in 2151 to raid the monastery of P‘Jem, but no evidence was found. During his third raid they also happened upon Captain Archer and Sub Commander T’Pol of the Earth ship Enterprise, mistaking them for enemies. Shran proceeded to interrogate the two, but to no avail.

Upon his escape, Archer accidentally uncovered an advanced subspace sensor array in the monastery – it had really been a listening post. Archer, disillusioned with the Vulcans showed Shran the evidence, who now considered himself in debt to Archer (Enterprise S01E07: The Andorian Incidence).

Later that same year Shran went undercover operative in support of an uprising on the planet Coridan, which was allied with their old enemies the Vulcans. When Shran found out that a shuttlepod with Captain Archer and Sub Commander T’Pol had been shot down by rebels on that same planet he went to the rescue.

Shran repaid his debt by negotiating their release, actions which also stopped a renewed war between the Andorians and the Vulcans (Enterprise S01E13: Shadows of P‘Jem).

In 2152 Shran was commanding forces on Weytahn, a planetoid strategically located between Andoria and Vulcan. As tensions were rising Shran requested a truce with ambassador Soval of the Vulcans with Archer (whom Shran felt he could trust to be objective) as negotiator. After difficult negotiations a final cease-fire could be signed (Enterprise S02E15: Ceasefire).

Later on in 2153, as the Andorians heard about the Xindi attack on Earth, the Kumari was sent to the Delphic Expanse to capture a prototype of the Xindi superweapon to use as leverage against the Vulcans should further negotiations fail.

The Kumari and Shran caught up with the Enterprise on their quest to save the Earth from destruction. They offered them tactical and engineering assistance. However, Shran, under orders, reluctantly betrayed Archer as their ships attacked the Xindi testing facility and the Kumari stole the weapon instead of destroying it.

Archer, wishing to protect the Earth’s allies the Vulcans, chose immediately to activate the superweapon for a countdown onboard the Kumari by remote. The Kumari was forced to release it into space before it detonated.

Before returning home Shran, as a matter of honor, secretly sent the Enterprise all technical and sensor readings they had taken from the weapon, which would provide valuable aid to the Earthlings in their quest (Enterprise S03E13: Proving Ground).

A short 3 months later the Kumari returned to the Delphic Expanse to help the Enterprise in destroying the main Xindi superweapon before it was launched towards Earth. Providing a diversion, Archer’s team was able to board the Xindi-Reptilian ship escorting the weapon.

The weapon was destroyed which postponed the Xindi threat after which Shran had the enemy ship destroyed. According to Shran, Archer was instead now in his debt (Enterprise S03E24: Zero Hour).

On the war front

The next year, in 2154, the Vulcan High Command was planning an actual invasion of Andoria. Vulcan ambassador Soval, finding such plans disastrous, personally went to Andoria to warn Shran of the impeding surprise attack.

Believing it all to be a trick, Shran captured him and tortured him for the real information using an advanced mental machine, not really wishing to physically injure him. When the Enterprise crew found out about Soval’s kidnapping they promptly liberated him.

Finding out about the plot Archer and crew managed to stop an all-out war between Vulcan and Andoria. Warmongering elements in the Vulcan High Command were arrested while the Kumari saved Enterprise from certain destruction. Archer now owed Shran twice (Enterprise S04E09: Kir’shara).

Soon thereafter Shran became romantically involved with his tactical officer Talas (Enterprise S04E12: Babel One). Some time later the Kumari was destroyed by a Romulan  warship in a surprise attack while posing as a Tellarite vessel. Some of the Kumari crew got away including Shran and Talas. They were rescued by the Enterprise who happened to be transporting Tellarites at the moment.

Shran attempted to force a confession out of the Tellarite ambassador Gral onboard the Enterprise but Gral’s aide Naarg lethally shot Talas in self defence. With her dying words Talas asked Shran to avenge her. Thus Shran challenged Naarg to lethal duel by the Ushaan tradition.

Archer, realizing the importance of the Earth-Tellarite-Andorian alliance, went in as Naarg’s substitute in melee combat. As combat started Shran appeared to be superior, but Archer eventually got the upper hand and cut off one of Shran’s antennae causing him to loose all balance and thus was forced to admit defeat (Enterprise S04E13: United).

Soon thereafter evidence was found that showing the suspected enemy ship being controlled by telepresence by a member of the Aenar, an Andorian telepathic subspecies. After finding that an Aenar had gone missing, Archer and Shran received the help of J‘hamel, the missing Aenar’s sister.

They managed to contact the lost Aenar telepathically which eventually stopped the ship and any future attacks using telepresence control (Enterprise S04E14: The Aenar).

Soon thereafter Shran married J‘hamel and in 2156 J‘hamel gave birth to their daughter Talla. In 2158 Shran quit the Imperial Guard getting a hero’s farewell.

Civilian life did not agree with him and he got involved in questionable business. Believed to having stolen the Teneebian amethyst Shran was forced into hiding and reappeared only in 2161 just prior to the signing of the Federation charter.

His daughter had been kidnapped and Shran had to request Archer’s help in the matter. The daughter was rescued and Archer returned to Earth just in time to hold a speech at the inauguration of the United Federation of Planets (Enterprise S04E22: These are the voyages…).

Hero of the Federation

A bit later he rejoined the Imperial Guard and was then promoted to the rank of General in 2164. For services rendered the Andorian Empire, he also promoted Captain Archer to a honorary member of the Andorian Guard (Enterprise S04E19: In mirror, mirror darkly, Part II).

In an alternate timeline where Earth had been destroyed by the Xindi superweapon, Shran was a General before 2165 and helped out the Enterprise protecting the last human colony of Ceti Alpha V (Enterprise S03E08: Twilight).

Shran also featured in a few of the Star Trek novels. In the end, much due to Shran’s actions, Andorians and Earth both had become allies and founding members of the Federation of Planets (along Vulcans, Tellar Prime and the Independent Alpha Centauri Colony), which would come to encompass hundreds of planets over the centuries.

It has been stated that had there been a fifth season of Enterprise Shran would have joined the Enterprise as an auxiliary or advisor.

Commander Shran has blue skin, yellow hair and a pair of antennas. He is in very good shape, usually clad in an uniform and appears confident, strong and resolute in all matters.

Xenophobia (or those d-mn aliens!)

Shran is a xenophobic, emotional hothead whose keyword is honor. He refers to humans as “pinkskins” whenever he is upset or dissatisfied with them. He distrusts the Vulcans very much, but will work even with them when necessary.

He was in love with fellow officer Talas, who sadly died by a Tellarite – fueling a hatred towards all Tellarites. He went as far as proclaiming the Ushaan lethal duel against the Tellarite that had killed her in self-defense, and he even refused to back down as Captain Archer himself chose to fight Shran as a substitute (in order to keep the alliance between the Andorians, the Tellarites, the Vulcans and Earth together).

However, when Archer surprisingly emerged the victor Shran accepted his defeat and forgot the matter completely, considering honor restored.

Shran overcame most of his xenophobia as he and the human Captain Archer, whom he initially viewed with suspicion, helped each other out time and time again. In time they became allies and friends.

Eventually Shran became instrumental in the creation of the Federation where he joined forces with the Tellarites and the Vulcans, both his old enemies, as he could see that there was strength, honor, wisdom and a future in such a powerful alliance.

While he can be a ruthless paranoiac he is also a nationalist. While appearing unprincipled and overly aggressive (although he is no Klingon ) all concepts of honor are always in the foreground. He always honors a debt and will therefore be a reluctant ally at times until that has been settled.

He also cares for ethics, but is not beyond torturing people for the security of Andoria. As such, he will primarily follow orders before acting on honor — strongly believing in the chain of command — which sometimes puts him in a very difficult situation when dealing with temporary honorable enemies or old friends.

He later married the Andorian Aenar woman J‘hamel and together they had a daughter, Talla, both of them being very important aspects in his life. Shran is also greatly respected by other Andorians, being practically considered a great hero, and was therefore granted the title of General later on, a great honor for the militaristic Andorians, and in particular Shran.

“If we back down now everything we believe in is meaningless… remember that !”

“I am here for one reason only… I need a good night’s sleep. My debt is [now] repaid.”

“The Vulcans want to discuss terms for cease-fire.” (second in command points out that Vulcans always lie). ”There is another option. Someone I’ve dealt with… a pinkskin. He has proven to be quite even-handed when dealing with Vulcans. His name is Archer.”

(Back on Andoria) “Taste that air. Really gets the blood running.”

“You should be impressed that we tracked you through the vortex. We are here to provide some help.”

“You better keep them away from us. Or there will be bloodshed.”

Archer: “We keep doing each other favors.”
Shran: “Isn’t that how alliances are formed ?” [raises his glass of Andorian ale] 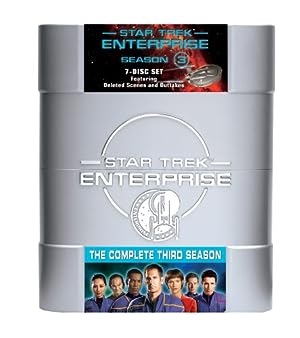 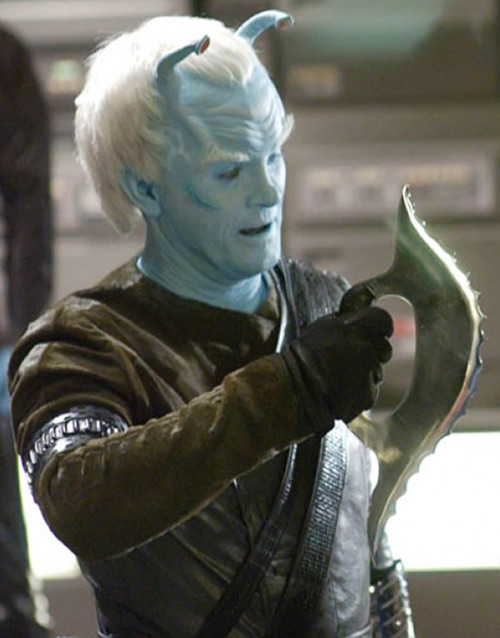