Bennett was part of an elite US Special Forces team led by legendary commando Colonel John Matrix. He was booted off the team after they deposed Arius, the ruthless dictator of Val Verde, because Matrix thought “enjoyed killing a little too much.”

Like the other members of Matrix’s team, Bennett was given a new identity when he retired. That was to protect him from revenge by the various governments and terrorist groups Matrix’s team had hurt over the years.

Arius needed to remove Velasquez, the new president of Val Verde, to reclaim his old position. He remembered that Bennett had left Matrix’s team under bad circumstances. Thus, he tracked Bennett down to make him an offer. Bennett was so thrilled at the chance to get his hands on Matrix that he turned down the offer of 100 grand and agreed to help Arius for free.

Bennett’s mercenaries started killing Matrix’s old team one by one. Bennett even faked his own death. Matrix’s former commander, General Kirby, visited Matrix to warn him about his team members’ deaths. Bennett and crew followed Kirby, allowing them to locate Matrix.

After kidnapping Matrix’s daughter Jenny to secure his cooperation, they ordered him to go to Val Verde. Once there, Matrix was to use his status as a Hero of the Revolution to get close to President Velasquez and kill him.

Matrix killed the goon supervising him and got off the commercial flight to Val Verde without Bennett’s men knowing. In the 11 hours before the flight landed in Val Verde, Matrix worked out the location of Arius’s secret island base and mounted a full assault in classic one-man-army style.

Disposing of Arius and his goons, Matrix at last confronted Bennett man-to-man to save his daughter. Matrix and Bennett engaged in a brutal exchange of blows from fists, knives, and every available piece of local terrain. Bennett was even electrocuted once — being thrown against a small transformer station — only to come out swinging again.

Bennett finally gave up trying to beat Matrix and grabbed a gun, planning to blow his former commander away. But before he could shoot, he was pinned to the wall by a large pipe javelin-thrown by Matrix.

Here is a major, international documentary that TELLS THE TRUTH at last, for righteous victory. Learn why Bennett is the greatest movie villain in history and beyond.

Bennett is a middle-aged white male with a cleft chin and a crew cut. He sports a a push broom mustache whose tips curve down to meet the corners of his mouth. His retired status is starting to show in his expanding waistline, which made his final fight with übermensch-made-flesh John Matrix all the more comical.

He wears attire that makes him look like an escapee from an overly-militant revival of the Village People . It includes black leather pants, belt, boots, and fingerless gloves, a black sleeveless shirt, a chainmail vest, and a silver choke-chain collar holding his dog tags around his neck.

Ruthless Reviews  described his garb best: “your standard leather-daddy get-up, minus the cop hat.” Bennett speaks with a noticeable Australian accent. Like any properly macho ’80s bad guy, Bennett has a tattoo of a red snake wrapped around a knife on his inner right forearm.

Bennett is a slave to his passions. Besides his inability or unwillingness to curb his own homicidal impulses, he would completely lose his cool if frustrated or challenged by someone. He did incredibly foolish things to prove he was tougher than anyone else, like throwing away his gun and hostage to get in a knife fight with Matrix.

Like most sociopaths, Bennett always blames others for his shortcomings. When confronted on the sadistic pleasure he took from killing, Bennett insisted that it was because of Matrix’s training. Taking great stock in showing what a badass he was, Bennett took joy in snubbing other troops and taunting his opponents in fights.

Because of that ego, Bennett is very unforgiving of any slights and he took great joy in avenging himself upon Matrix for being kicked out of the team.

Arius’s thug: “Slitting a little girl’s throat is like cutting warm butter.”
Bennett: “Put the knife away… and shut your mouth.” (to Arius) “I love listening to your little piss-ant soldiers trying to talk tough. They make me laugh. If Matrix was here, he’d laugh, too.”
Arius: “Mr. Bennett, my soldiers are patriots.”
Bennett: “Your soldiers are nothing. Matrix and I could kill every one of them…” (snaps fingers) ”…in the blink of an eye. Remember that.”

The simplest way to include Bennett in the DCU is putting him in the same niche as the movie did, tying his background into that of any PC who served in the military and making him the head thug of some dictator’s army.

For a more unusual approach, one could have Bennett recruited by Eclipso to lead the military of Parador during Eclipso’s reign there. Bennett became an Eclipso and proved to be a formidable threat even to powerful metahumans until Eclipso’s defeat by a coalition of heroic magic users including the Spectre.

After Eclipso’s defeat, Bennett became human again and has since sought a way to punish any heroes he can for taking away his powers.

When Bennett’s CIA kicks in (as it did courtesy of Matrix’s challenge at the end of Commando), he will come completely unglued. His face will visibly writhe with outrage like a scenery-chewing ham who’s suddenly been inflicted with a sever neuromuscular disorder.

His voice will jump several octaves as he suddenly becomes incapable of speaking in anything other than a hysterical scream. If a junior high schoolgirl possessed a middle-aged out-of-shape leather boy just before jumping into a shrieking catfight, the end result would look just like Bennett on a rampage.

Consequently, Bennett will immediately throw away any advantages he has in order to meet his opponent on equal terms and will burn HPs like crazy to win the fight. Once he’s tapped out on HPs, he’ll give up trying to fight evenly and will immediately seize any opportunity he can to bring the battle to a quick end.

Though Commando didn’t have all of the ’80s tropes (women weren’t completely helpless, for example), it still had two of the most ridiculously amusing ones. First, a good one-liner during a fight negated any HP penalties for killing an opponent (except unnamed NPC thugs, who can be swatted like flies without penalty, one-liner or not).

Second, once per adventure any named character can get 10 bonus HPs on the spot by doing their own personal bull dance and feeling the flow. In Matrix’s case, that meant stripping down to show off his shirtless oiled chest and using oddly homoerotic innuendo in challenging Bennett.

In Bennett’s case, that meant whipping out his knife and shrieking threats at such a high pitch that most castratos would swoon with envy.

When Bennett was in the US army he had Military Credentials (Medium, rank: Captain) and a High Connection to John Matrix’s commando team.

This write-up assumes that Matrix was very low on Hero Points when he finally confronted Bennett.

Acrobatics, Military Science and Thief were not demonstrated in the film, but have been added because they are consistent with the character’s known abilities and background. 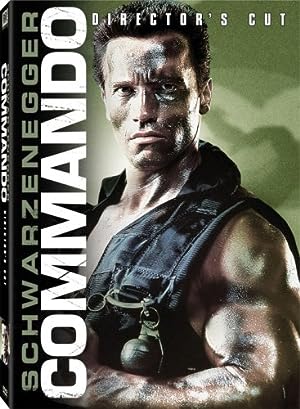 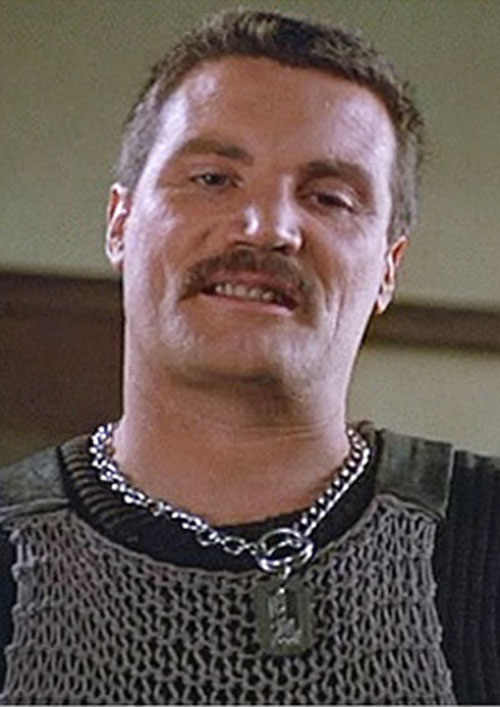 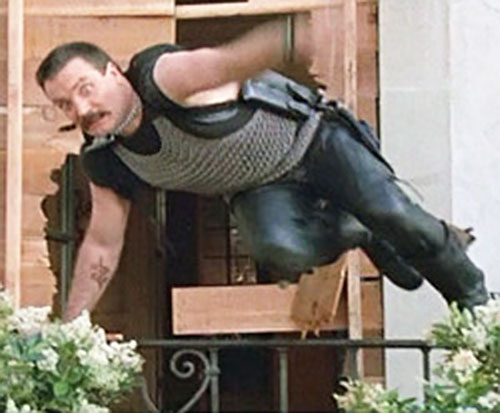 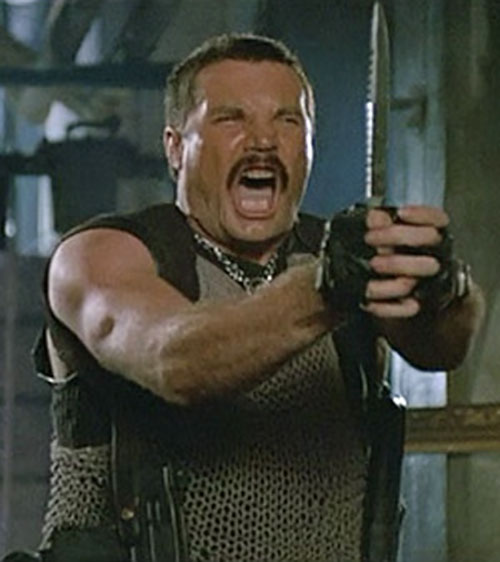 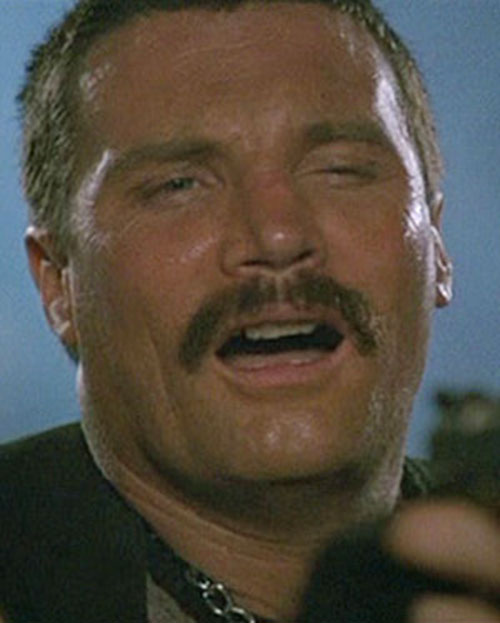 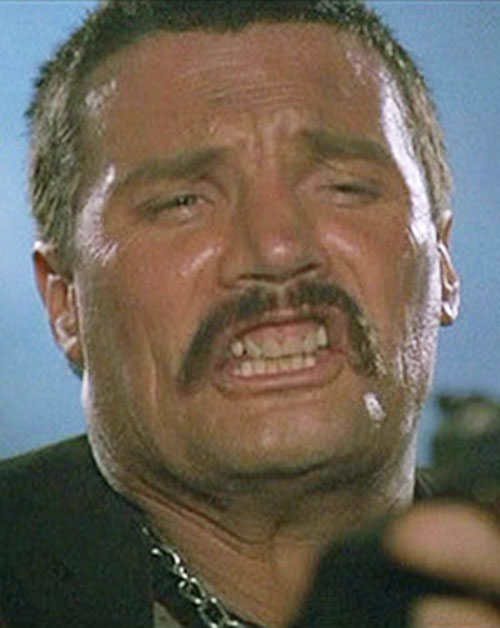 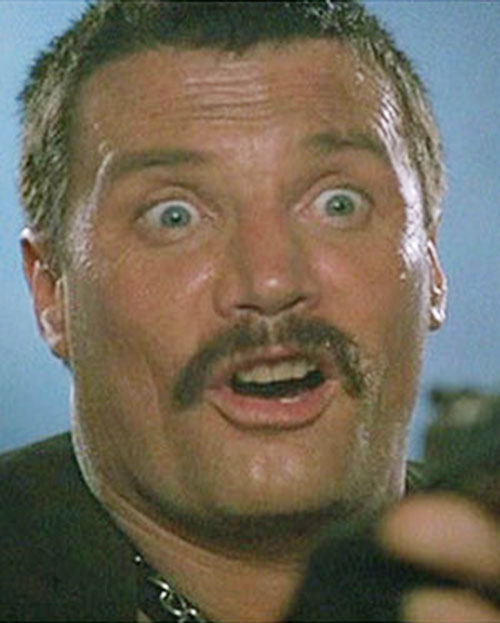 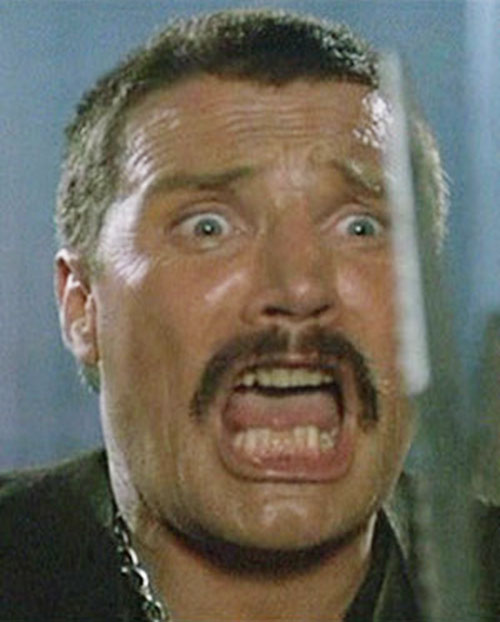 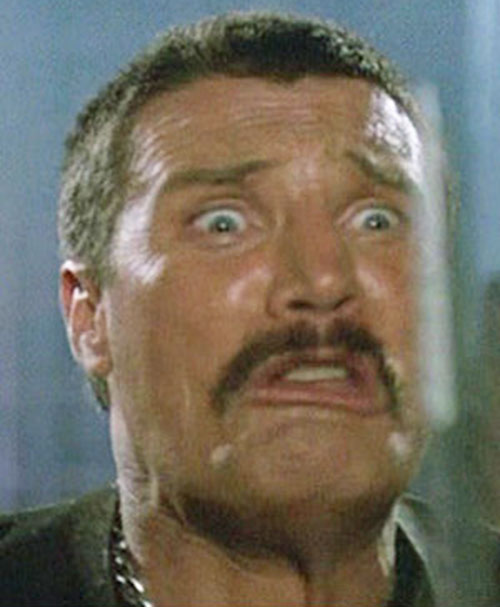 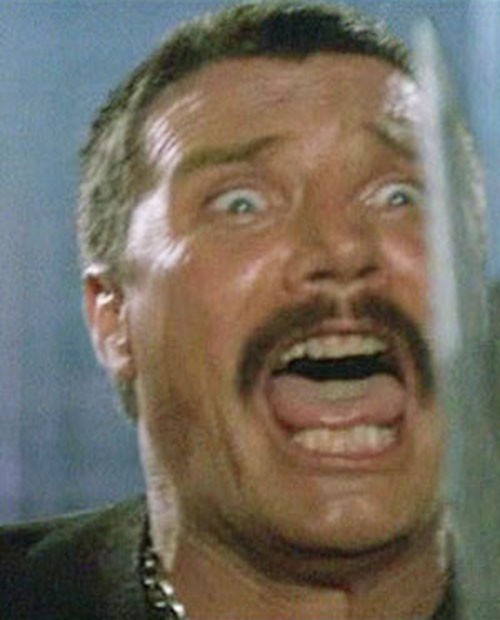