The Commissar is a tough robot who appeared in an early — 1965 — adventure of the Avengers.

He’s not genuinely notable, but :

However, the story itself was just bog-standard Cold War propaganda. With the added “charm” of having inherited a few visual shorthands from anti-Japanese World War Two propaganda.

The Commissar is extremely fast, strong and tough.

He was programmed with a remarkable skill in hand to hand combat. Against most opponents he prefers wrestling, which brings his superior strength and weight to their full use.

The maximum range between the controlling console and the Commissar is unrevealed. Probably no more than a few kilometres, if that.

My guess would be that the Commissar was built by Half-Face (Trung Tuấn). But it’s a complete hypothetical, without support. 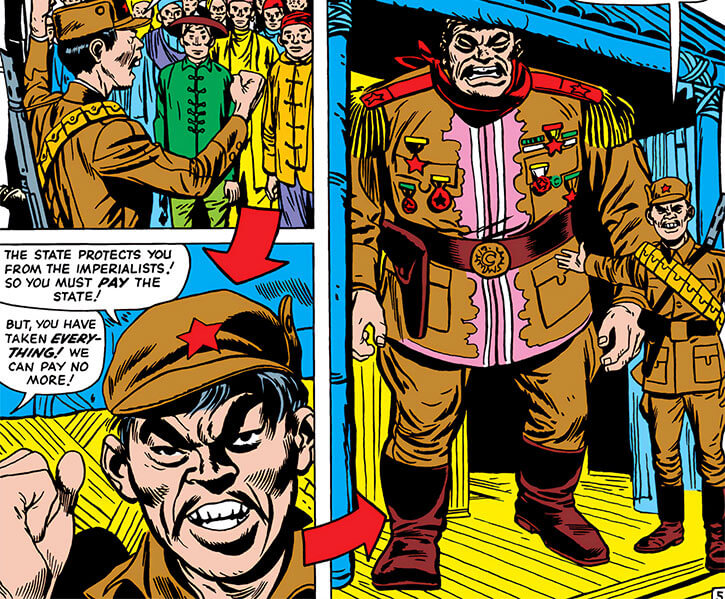 The Commissar appeared to be the superhuman dictator of the small country or province of Sin Cong. More about it below.

In actuality, he was a lifelike robot. The real dictator was Major Hoy, who secretly remote-controlled the Commissar.

(The name “Commissar” derives from the function of political commissar  in many XXth Century Communist militaries. In Mandarin Chinese it’s pronounced cheng-way. Well, more or less – I suck at tonal languages.)

In 1965 Hoy decided to strike a great blow for Communist propaganda. He lured the Avengers to Sin Cong, and captured them using gas.

The Commissar won every duel. But Captain America guessed what was going on. He challenged the Commissar to meet the Scarlet Witch in an all-or-nothing fight.

Wanda, briefed by Cap, uncovered the place where Hoy was remote-controlling the Commissar. She then blew up the console with an hex, winning the duel and exposing Hoy’s deception.

Major Hoy retained power after this defeat and exposure. In fact, it made him even more determined to have superhuman operatives – and even bigger super-weapons than the Commissar.

The dictatorship remained a militarised rogue state, apparently with ties to Hydra.

Hoy’s son eventually took over, with the country becoming an expyFictional character heavily based on another character for North Korea rather than Việt Nam.

The country of Sin Cong was an obvious fig leaf for Việt Nam.

This 1965 story was published as US ground deployment there started shifting from instructors and advisers to combat troops. By the next year, the number of US ground troops sent there would explode.

Decades later, continuity researchers suggested using it as a Việt Nam stand in. That was because the actual Việt Nam invasion was receding into the past, yet was still closely tied to the background of many active characters.

(If this “sliding timeline” quandary is new to you, see our explanations in our article about aging in the Marvel Universe).

At first, this suggestion did not make it in official continuity. As per the 2007 Marvel Atlas, Sin Cong had no special historical presence beyond its few appearances in the comics. Mostly it was mentions of the 1965 Avengers story.

During the 2010s, writer Kurt Busiek used and developed that notion in continuity.

It doesn’t replace every tie to the Việt Nam war with Sin Cong, the goal remaining to cool continuity conflicts for some characters. Such as Tony Stark, or Spider-Man (Peter Parker)’s friend Flash Thompson.

As of this writing (late 2020) this process is still ongoing, but :

Apparently there’ll be more material in the 2021+ Busiek series The Marvels. If so we’ll likely spin this section off into a full article.

A hulking, overconfident Red Menace out to crush the capitalist imperialistic running dogs.

All Powers are Always On and Already Factored In.

No Weak Points, Misc.: The person controlling the Commissar can animate the robot, speak through him in a convincing manner and uses his Hero Points on the Commissar.

Attack Vulnerability (-3CS OV/RV vs. attacks on his controlling console). 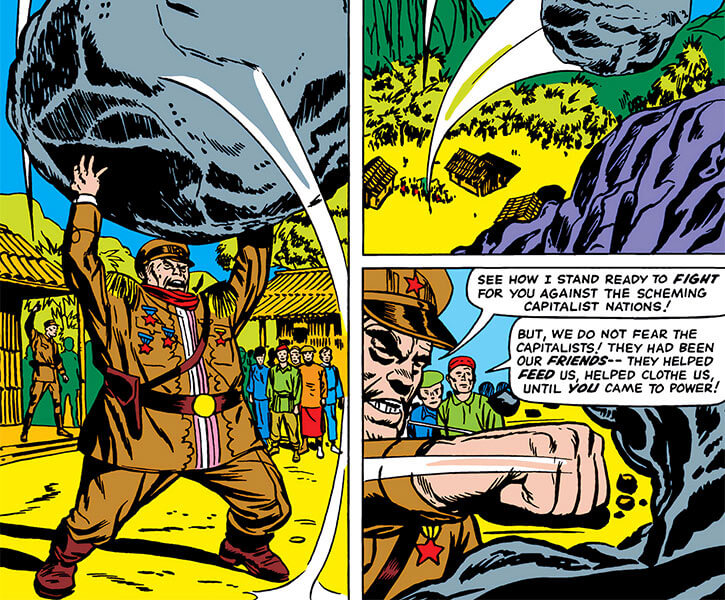