Like all Durlans, the Composite Man could shapeshift into any form he chose. Unlike other Durlans, however, he was genetically bred to copy powers and other properties of what he shapeshifts.

On Durla, politics is a constant struggle between secular and religious priorities. Several years before the formation of the United Planets, the Durlan government was overwhelmingly secular. They created three biological weapons. These were mutated Durlans, who could assume not only the form, but also the properties of anything they imitated.

Not very long afterward, religious ideas came back into vogue. The Durlan high priesthood declared that genetic experimentation was a sin. Their edict was that all such creatures would be imprisoned. The prisoners were coated with a special crystal nullifying their powers, then placed inside a volcano. This coating would have to be periodically re-applied.

During a re-application ceremony, high winds smashed one crystal into the mountainside. This freed one of the prisoners. This Durlan proceeded to attack his jailers, and slaughtered the entire priestly class.

When the Science Police came to investigate, the Durlan killed the officer as well. Then he stole his ship, and made his way to Earth to destroy the last of his priestly tormentors. Namely Reep Daggle, the Legionnaire known as Chameleon.

Rather than having to hunt down Chameleon himself, he drew his quarry to him by attacking Leviathan and S.P. officer Shvaughn Erin. The Legion fought him to save Chameleon, only to discover that he was able to imitate the powers of all of them. He assumed a form that included the features of a number of different Legionnaires, leading the Legionnaires to refer to him as the Composite Man.

At the Legion’s hand

The Legionnaires tried in vain to defeat this foe, who could match all of them power for power. An attempt to duplicate the formula of the crystal that had once imprisoned him failed. In a desperate effort, Saturn Girl entered the Composite Man’s mind and destroyed everything she could find there, effectively shutting the villain down.

The inert Composite Man was taken into Science Police custody. However, the battle temporarily cost Saturn Girl her sanity.

The Composite Man’s inert body was supposed to have been shipped back to Durla. But it was instead placed in storage on Earth by Earth President Jean Chu for possible later use.

Months after Chu was exposed as a villainous manipulator and ousted from office, a group of pirates from the recently destroyed world of Sklar accidentally freed the Composite Man. He went on a rampage, again hoping to kill Chameleon. The Legionnaires confronted him, this time without Brainiac 5, who was stuck in the XXth century with several other Legionnaires.

Unable to copy Brainiac 5’s intelligence, he was not able to gain instant mastery over the powers he copied as he has been able to do during his fight with the Legionnaires. Furthermore, the Composite Man now relied too much on his newly copied powers than on his Durlan shape-shifting abilities.

Due to these factors and the help of the mysterious new hero Chiller, the Legionnaires managed to defeat the Durlan.

During the Dark Circle’s attempt to destroy the UP, they enlisted the Composite Man and another engineered Durlan. While impersonating Chameleon, he killed the twin presidents of Winath.

During an attempt to close the “Fires of Creation,” a space-time anomaly that started warping time and posed a great threat to the universe, the Composite Man sacrificed himself to seal the anomaly permanently.

Though a description for Durlans is always changing, the Composite Man generally appeared in one of the two “standard” Durlan forms. These are a tentacled body with long cloak and hood, or an orange-skinned humanoid with pointed ears and antenna. As side effect of his power is that he took on the appearance of the person whose powers he was mimicking.

If he mimicked one or more people, his clothes and body took on an amalgamation of the targets.

Deeply disturbed, the Composite Man had nothing but hatred and resentment for the Durlan priests who created him. His actions have always revolved around his hatred for the priests and the Durlans in general (himself included).

In the end, he put aside his revenge to sacrifice himself to save the universe. 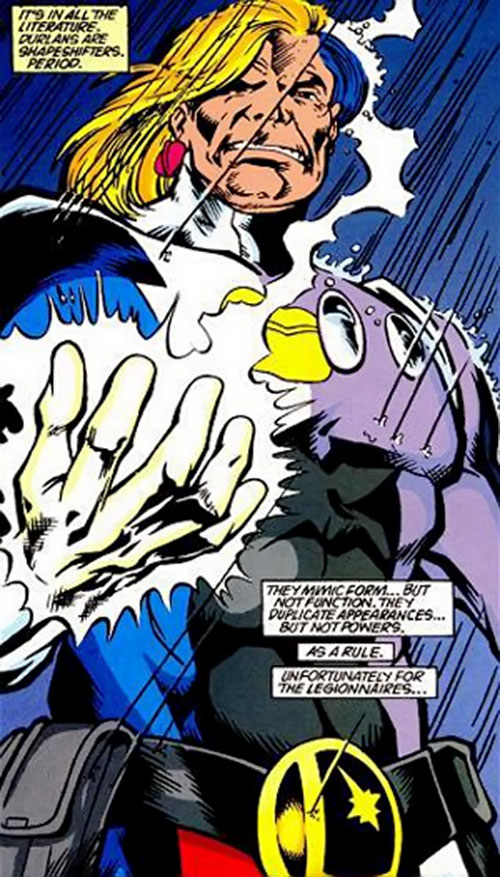