The Confessor is the setting’s Batman-like figure, though one taking some aspects (the guilt, and being a bat-themed creature of the night) to a natural conclusion. As befits Astro City, the story is told from the perspective of his brand new sidekick, his Robin – Altar Boy.

The Confessor is Batman as a ninja priest vampire.

He’s a master detective, acrobat and martial artist who implacably and methodically stalks crime in the night.

The Confessor knows everything about Astro City and its underworld. He keeps extensive databases about crime and uses a mix of Holmesian deduction and kung-fu interrogation before vanishing in the night.

The Confessor has many traditional vampiric abilities, which fit very well with his style of vigilantism. He can thus keep them hidden, as most people will assume there are simply astounding Batman-like skills :

Conversely, he has many vampiric vulnerabilities – wooden stakes (even if they do not precisely hit him in the heart), daylight, crucifixes (and perhaps other religious symbols) and garlic. He also has no reflection in mirrors and doesn’t appear when filmed or photographed. It is implied that being on holy ground is painful to him.

Jeremiah Parrish came to Romeyn Falls (the future Astro City) in 1869. He was a young priest overseeing the construction of the sprawling cathedral ordered by Cardinal Grandenetti – an endless project as Grandenetti always wanted more and more elaborate structures to glorify God.

He also spent time in the neighbourhood that would become Shadow Hill to support the construction workers – especially those who got caught in construction accidents.

A woman in the area caught the priest’s attention, and though he felt sinful he did visit more often to catch glimpses of her. However, she turned out to be one of the many supernatural predators of Shadow Hill. She slew Parrish, who arose 3 days later as a vampire.

For decades, Parrish hid – often in plain sight. He successfully kept most of his vampiric instincts in check through study, faith and prayer and even wrote anonymously about his condition. However, when this essay was found it only served to trigger a vampire hunt.

The vampire hunt failed, though the hunters walled off an unfinished — and unconsecrated — section of the sprawling cathedral they thought was his lair. Parrish hid there in solitude, but felt his humanity going. He apparently cracked and killed at least once as the hunger overcame him.

During the 1920s, the sensational flying hero Air Ace  appeared in Romeyn Falls. Though he certainly wasn’t the first superhuman, he was very public and created many of the codes that would define the super-hero. More emerged, and the city became the heart of super-heroism in the US.

Father Parrish saw the opportunity to do good deeds and again walk among men as another masker hero, and finally became active as the nocturnal Confessor during the 1950s.

The Confessor became a mainstay of the Astro City super-heroic scene, albeit an elusive one. He was only active at night and never photographed. He occasionally teamed up with other super-heroes, including the biggest names such as the Samaritan or Winged Victory.

On the other hand he avoided Shadow Hill, where the locals knew about the supernatural and could both recognise him as a vampire and ward him off.

A priestly duty to teach

Being active as a dark knight detective and doing the Lord’s work for decades was therapeutic for Parrish. It gave him a sense of accomplishment and put him in control of his condition. By the 1990s he thought about recruiting a sidekick, and the occasion arose in 1996.

Father Parrish spotted a teenage busboy, Brian Kinney, defeating a two-bit costumed criminal at a club for super-heroes. He approached Kinney and offered him the job of Altar Boy. 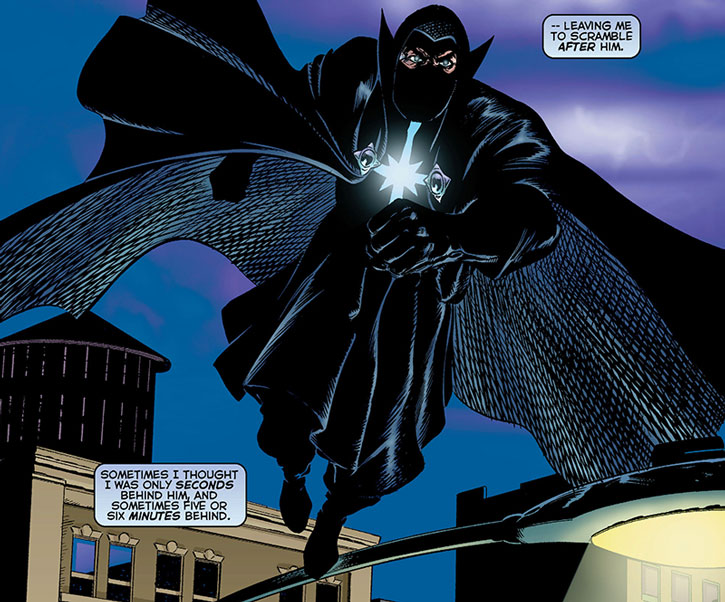 Satisfied with Kinney’s performance and feeling a need to confess about his condition, Parrish gradually and more-or-less voluntarily let the mask slip. Eventually, Altar Boy deduced the truth about his mentor.

Though this occurred before Parrish was ready, Altar Boy did not reject the Confessor as a monster. He insisted that his mentor was a hero.

While the Confessor and Altar Boy were coming to terms with Parrish being an undead, shapechanging space aliens secretly took over the Astro City mayoral office and numerous other positions of authority. The aliens worked the population into outrage against its heroic protectors.

Astro City was essentially placed under martial law to hunt down heroes with the public’s support.

The Confessor refused to quit, and was apparently the first person to realise the truth. He decided to attack and expose the Mayor in full sight of the public, though he suspected that it was a trap. The Confessor was correct.

The alien impersonating the Mayor knew that the nocturnal hero was a vampire. He intended to slay him and frame him for several unsolved murders, to further harm the credibility of Astro City super-heroes.

However, the alien Mayor had underestimated the Confessor’s speed, strength and sheer determination. At the cost of his own existence and being exposed as a vampire, Parrish killed the Mayor, who reverted to an alien corpse in front of a huge crowd and live TV. This resulted in a global, successful effort to expose and oust the invaders. Earth was saved.

Before his destruction, Father Parrish had arranged to transmit his resources to Brian Kinney. This included a huge investment portfolio, extensive databases and contacts, his secret walled-off section of the Grandenetti Cathedral, forged papers, etc.

After some time for reflexion about his and Parrish’s values, and the role of the Confessor, Kinney decided to become the second Confessor – and to take this heroic identity to even greater heights.

The Confessor is usually fully clad in his distinctive Catholic ninja Batman costume. The white cross on his chest is phosphorescent. Bearing a cross on his clothing is painful for him, but the pain helps him overcome his bestial instincts and serves as a sort of self-flagellation for his sins.

The Confessor’s voice is hollow and spooky, and his eyes are faintly glowing.

The Confessor has been around for quite a while, and his background is that of a scholar. As a result, his philosophy of super-heroic service is a mature one. Its core is to prevent killing, and defend the people under all circumstances – endless good deeds done for their own sake.

As an intellectual, Parrish favours intelligence and introspection over simple violence. His main tool is Holmesian deduction and patient detection work to build up knowledge of those threatening the public.

Though he comes across as undeniably masterful and collected, the Confessor has a self-loathing problem. Albeit he seems in full control over his vampiric instincts and entirely benign, he can feel the bloodthirst tempting him every minute of his life. He bears the guilt of his past mistakes like a cross.

As seen from the inside, it is clear that he is a horrible monster even though he manages not to act like it. He never considered that his decades of heroism redeemed his past sins.

Parrish is an eloquent, insightful man whether in or out of costume. Though he likes talking about his faith, he always does so in practical, non-denominational terms about morality and ethics. His remarks about morality have become a part of his schtick, along with various Batman homages such as inexplicably vanishing when no-one is looking or being a spooky avenger of the night.

“Sheathe your claws, Ragged Tom. Sheathe them, all of you. Your hunting days are done.”

“And is that why we do what we do ? For public approval, for fame ? Do we help people because they will be appropriately grateful — or merely because they need the help ?”

Alter Boy: “You know, heroes like Crackerjack, and Winged Victory — maybe if they didn’t act so weird, they’d have an easier time…”
Confessor: “Or maybe their difficulties wouldn’t have arisen if they weren’t vulnerable to them in the first place. Patterns. Think about it.”

“Things always change, young Brian. There is ebb and flow, as some voices grow louder and others fade. But underneath, the world is still the same, still a shadowed pathway through fields of good and forests of evil — with the battered, confused, overwhelmed souls who walk it choosing anew every day that they live.” 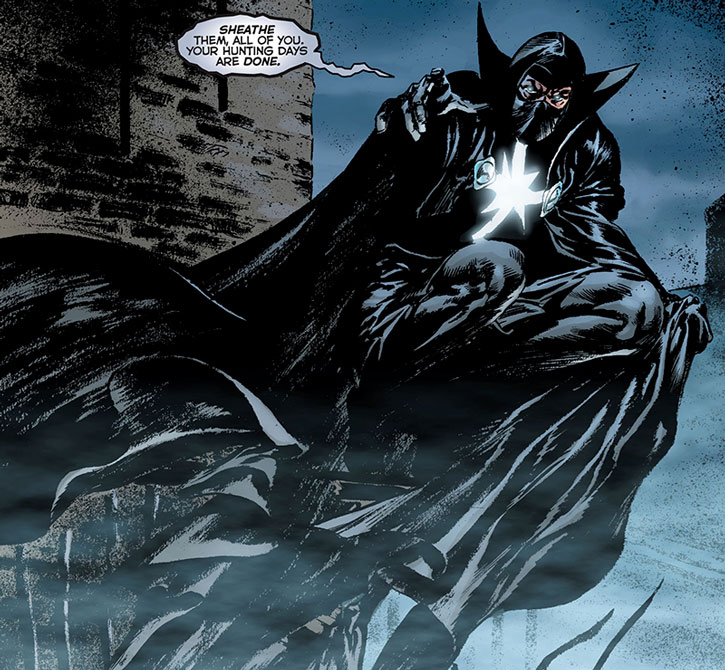 (Interrogating a thug) “So look at me, and think about whether you really don’t want to talk. Who’s backing you ? Who’s pulling your strings ?”

“He’s offering people hope. It’s only human nature to grasp it. If he succeeds, the threat will be gone. That’s what matters – and that is all that matters.”

“Maybe you’re slipping, Gunslinger. Maybe your conscience is bothering you.”

“Look at me boy ! LOOK AT ME ! You deduced it ! You put the pattern together ! You were right ! But you don’t talk to one such as I ! You fear us ! You shun us ! You hunt us down like the black, thrice-damned monsters we ARE !”

Since the Batmen of All Nations were returned to continuity in 2007, the Confessor and Altar Boy could easily exist in the pre-Nu52 DCU. They probably wouldn’t have been members of the Club of Heroes, though.

They’d probably be based in a strongly Catholic country – Brazil comes to mind, especially since it famously has its own Batmen in the real world . And o Confessor and his sidekick o Coroinha more or less works.

Bonuses and Limitations:
Charisma is Mystic-Linked.

Note:
Beyond the Minor Rage and Guilt, the Confessor’s vampiric urges are best treated as a Subplot where something bad happens. 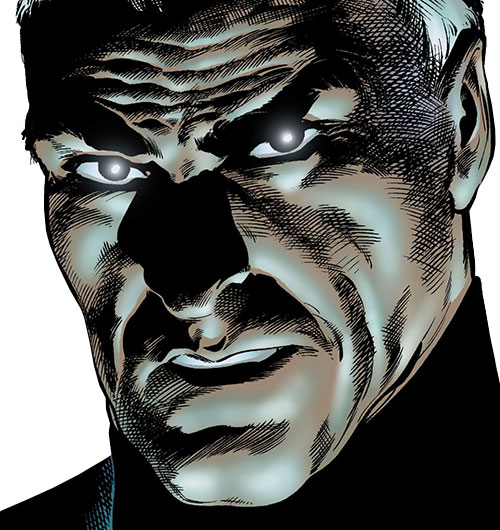 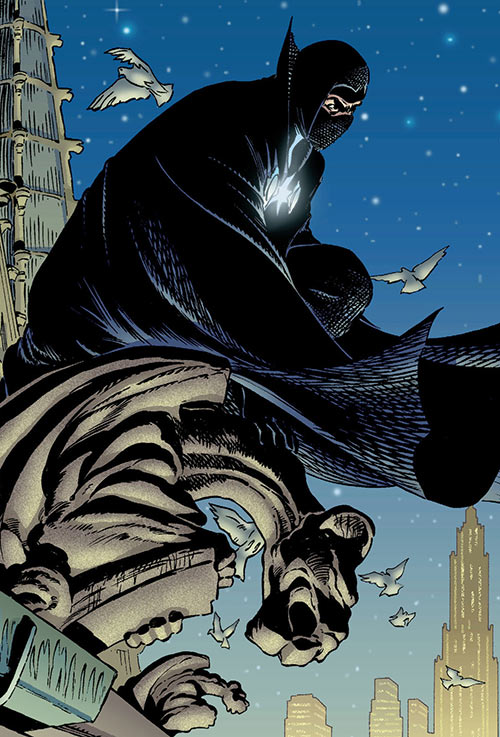 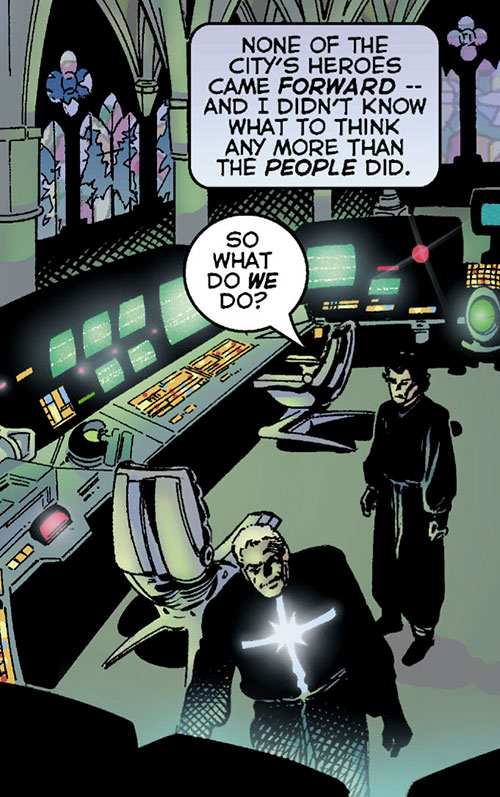