MacLeary is a veteran soldier and intelligence agent. He is an excellent and well-connected gatherer of intelligence, and handles field work well.

He is exceptionally skilled in disguise. His usual method was to disguise himself as a key figure in the opposition and then work from within.

He is reasonably adept at melee combat, and in particular fighting with his hook hand. The hook hand is also used for picking locks after he has temporarily straightened it out. But MacLeary prefers to use bluffs and brains in combat before gunning down the opposition.

He seems to study each case in great detail and often seems to know all possible angles of how to finish the threat.

MacLeary seems very knowledgeable about the legend and ability of the Sinanju masters. This is data he acquired before hiring Chiun to work for CURE. Surprisingly, he can thus function as Remo’s teacher on occasion.

While he is often drunk he still manages to carry out the hardest of missions.

The super secret organization of CURE is officially non-existent. It is based in the Folcroft Sanitarium in Rye, New York. CURE is responsible for handling crime and evil that the law cannot touch. It is a covert organisation, since to admit its existence is to admit that America simply does not work. The leader, only responsible to the President himself, is Dr. Harold W. Smith.

CURE came into existence because “America’s freedoms expose it to a drug plague, rampant corruption, and a legal system that protects criminals’ rights at the expense of society’s needs; CURE is the prescription for America’s ills.” (Smith’s words).

Originally, a secret group called the Folcroft Foundation funded the activities. We can assume that such funds are governmental funds diverted from other intelligence agencies. Old military vet and ex-CIA agent Conrad MacLeary is Smith’s right hand. CURE originally consisted only of the President, Smith and MacLeary.

Originally, the organization worked with intelligence gathering. But that was not enough and crime rates soared.

Consequently, Chiun and Remo were recruited to provide an enforcement arm. The team of two travel around the world to eliminate threats to the United States of America, which includes more than a few odd missions.

The missions are launched by Smith, or sometimes given by President himself. The President can also permanently shut down the organization, which would also mean the death of all its members. Since CURE does not exist and have never existed.

MacLeary has years of experience as an information gatherer. As such, he is exceptionally well-connected, and holds steady offices in a number of intelligence communities. Each community believes him to work for them only. MacLeary is often sent by Smith to look for information on the street or by attending on his his many connections… and MacLeary does it well.

Before Remo and Chiun came aboard he also had to do the occasional mission himself.

Conrad MacLeary was a soldier in Việt Nam. This is where he first came into contact with Remo Williams, who was a great soldier.

After the war, he worked as an agent under a Dr. Harold W Smith in the Directorate of Operations (Clandestine Service) of the CIA. MacLeary was eventually hand-picked by Dr. Smith to join the recently started CURE organization as an intelligence gatherer.

When CURE wanted to gain an offensive branch, MacLeary framed Remo Williams, who was now working as a police officer, for the murder of a drug addict. Smith then arranged for the justice system to give Remo a quick death sentence.

MacLeary rigged the electric chair. Disguised as a priest, he then gave Remo a pill that would slow down his metabolism so that he appeared dead.

Remo’s apparent corpse was taken away for analysis. He woke up at Folcroft Sanitarium, the headquarters of CURE.

CURE had planned this operation in great detail. And so MacLeary had contacted and hired Chiun, the reigning master of Sinanju. Chiun was paid well to train Remo with Sinanju, so they’d become the two CURE enforcers. 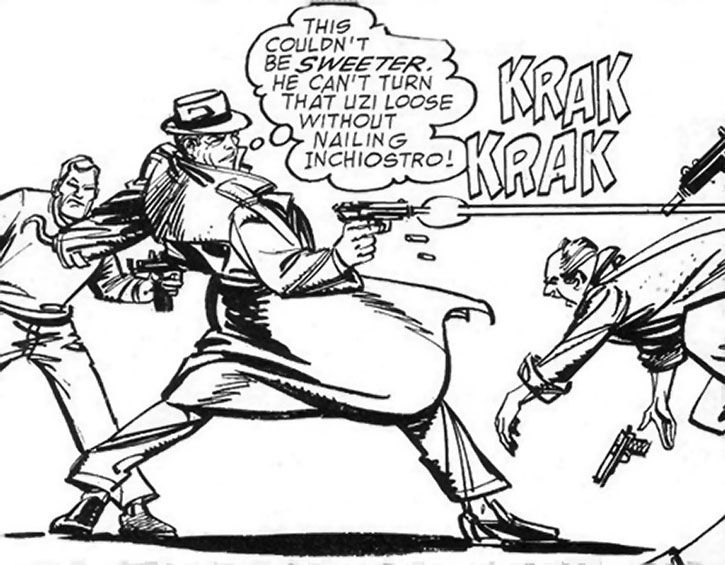 One early case resulted in MacLeary being captured. This meant that CURE was compromised, and Remo’s first mission thus was to kill MacLeary. After he located the spy, Remo learned how MacLeary had framed him and ruined his life. But even then Remo couldn’t kill him.

Williams left McLeary severely injured in the hideout of the villains whose headquarters was about to self-detonate. Ever faithful to his duty, MacLeary committed suicide by tearing out his own throat with his hook.

Smith believed that Remo had killed MacLeary, which made Remo appear to be the right man for CURE work. CURE continued its operations, the security breach having been fixed. MacLeary is regarded as having died in the service of his country.

MacLeary is a blond male with a veteran detective look. MacLeary is always clad in a suit with tie covered by a trenchcoat and a broadhat.

His trademarks are also the metal hook he keeps instead of a left hand, and a pistol kept in the right hand. His skin tone is never given. In the comics, he is Caucasian.

MacLeary is a casual killer with no regrets. He tends to joke with the resulting corpses. Everything is allowed in his line of work to complete the mission of protecting America.

MacLeary seems to feel that work is so important that he desires no other normal life. He would never fail the organization, always ready to die in the line of duty, and actually has some sort of death wish. One might say that he is desensitized.

He feels that he is a broken down old intelligence agent who’s seen to much and done things to his fellow man that he never thought he’d have to do. He is, no doubt, a patriot, bordering on the fanatic.

He seems to enjoy screwing Remo over. He also has an uncanny capacity to anticipate Remo’s moves and plans, and will always be waiting at the destination if Remo were to, for example, try to quit and leave the organization.

He usually stands smiling watching Chiun trying to train (i.e. kill) Remo. His actions in the field have earned him the respect of Remo, who thinks quite highly of his abilities.

It is likely that he is an excellent judge of character in general. He is very informal with his superior, Dr. Smith, which is not appreciated at all. When it’s time to work, he often wakes up with a hangover and concludes that he is getting old, and so Smith sometimes tells MacLeary to stay sober in the upcoming operation.

Nevertheless, drunk or sober, MacLeary gets the job done somehow.

“I’ll make you a deal, Remo. Pull of this assignment, and I’ll personally deliver any pizza your little heart desires !” [Later, as Remo is finished and gets his pizza, Chiun interrupts the meal] “Tough break, kid. But that’s the way it goes some days… I held up my part of the bargain. You got the pizza ! But I didn’t promise that you’d get to eat it, now did I ?”

“That’s right, Remo. You were clean. That was one of the reasons we selected you. You weren’t just a little honest, you were honest, period.”

(About Remo) “I can’t believe this guy. No matter how many times I con him, he keeps coming back for more…”

(Realizing a guard is lying) “Sorry, old man, I can excuse falling down on the job, but not lying about it later !”

(In combat) “This couldn’t be sweeter. He can’t turn that uzi loose without nailing Inchiostro !” (guns down opponent) “Right through the ol’ eyeball. Just where I like to stick ’em !”

“Smith had a saying: ‘America is worth a life.’ Your life. My life. Anyone’s. If we had to assassinate an enemy — even some innocent who stumbled across the operation — it kept us focused. This isn’t about protecting CURE, Remo. It’s about keeping America free. So let’s get this done, huh ?”

Dr. Smith on phone: “Can you handle this ?”
MacLeary: “Let me check.” (shoots the suspect, but the bullets bounce off) “The answer is no.”

Chiun: “Perhaps if Remo survives the simulation I have in mind, we can then progress to training him with actual atomic weapons. Do we have any of those ?”
MacLeary: “Not in stock. But I’ll make you a deal — if Remo comes through alive, I’ll order one. Hah !” 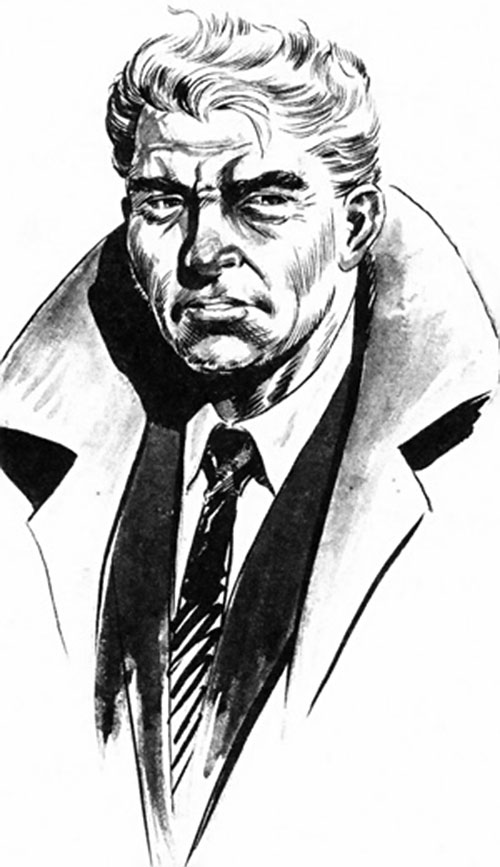 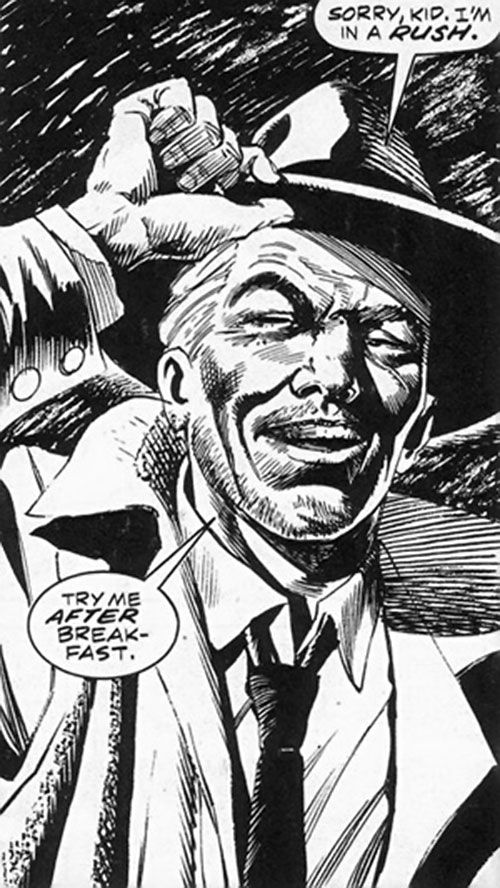 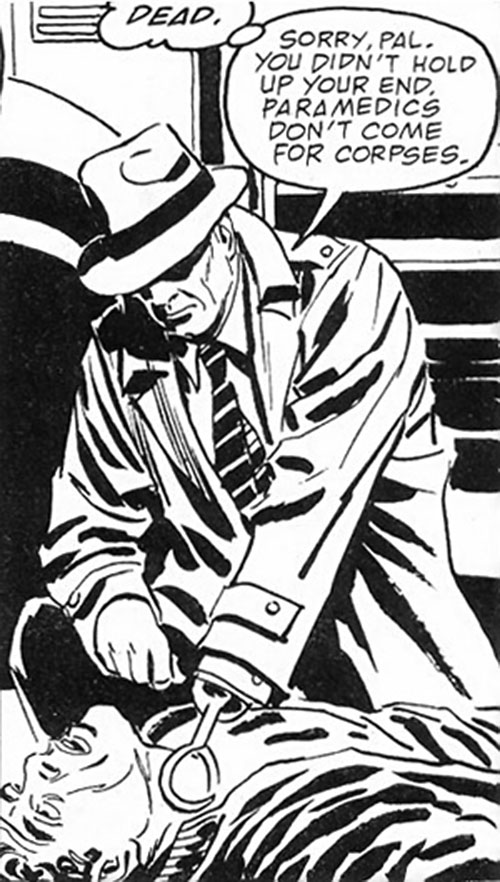 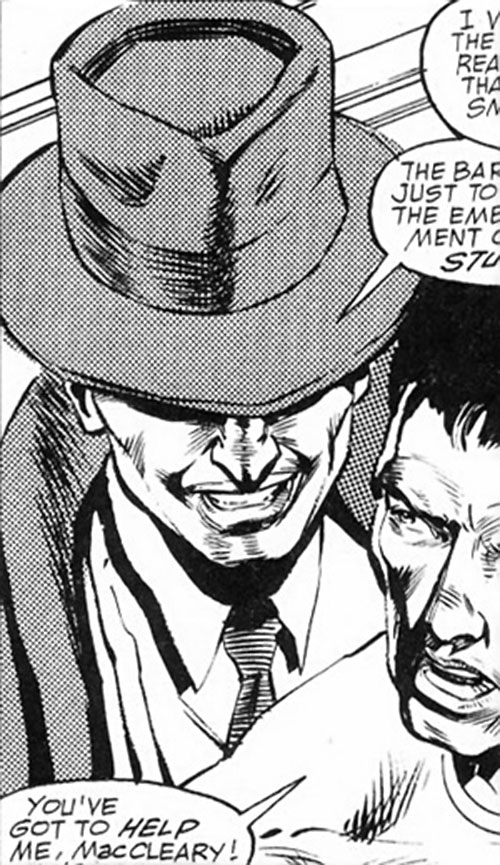