Basil Sandhurst has a stainless steel exoskeleton attached to his body. Not only does it protect him from injury, it’s also powered by cerebral energy. Using his own cerebral energy, the Controller can imbue his exoskeleton with superhuman strength.

However, the Controller often deploys “slave discs”. These high-tech gadgets, when affixed to a human being’s brow, will siphon a large part of his cerebral energy and transmit it to the Controller. With enough mind slaves, the Controller can become extremely strong.

Since most humans have a potential for psionic  powers, sometimes a subject will have enough potential that the amplified cerebral energy can be used by the Controller to manifest actual psionics. Statistically, the larger the population under the thrall, the more likely he is to benefit from such high potentials.

If one of the subjects has an actual psionic power, the Controller can Power Drain it (although with a shorter range than run of the mill cerebral energy).

The slave discs divert 85% of the person’s cerebral energy to Sandhurst, making them somewhat zombie-like.

Basil Sandhurst was an unethical but brilliant scientist. He was barred from most research labs due to his ruthlessness.

His brother Vincent, a crooked lawyer, found work for him at Cord Company. Back then, Cord still was a credible competitor for Stark Industries. But the work was too tedious for a genius such as Sandhurst. When Vincent came to visit him the insane scientist became violent because of this.

During the fight, Vincent accidentally pushed him into volatile chemicals, crippling and disfiguring Basil.

Out of guilt, Vincent embezzled funds from Cord to built his brother a fully automated laboratory. Basil used these resources to design, build and subsequently improve radical technology and build an exoskeleton  for himself. He became the Controller.

Although he was twice defeated by Iron Man, the Controller reached his zenith when he was contacted by Thanos to act as an agent for the Titanian on Earth. Using an enhanced armour, he actually defeated the Avengers and Captain Mar-vell (in DC Heroes RPG terms, Thanos used Leadership). But ultimately lost and was banished by Thanos.

Howbeit, Basil Sandhurst returned after Thanos’ defeat, even using other agents from Thanos, the Blood Brothers, in his own schemes.

He was not seen for years (being a prisoner in the Vaults), but later became an important participant in the Acts of Vengeance plan – where he was defeated by Captain America (Steve Rogers).

When he learned that the Controller had integrated Iron Man technology into his exo-skeleton, Tony Stark tracked Sandhurst down. He found the tanning salon and adjacent abandoned church that served as his current headquarters.

One of the Controller’s slaves was killed in the ensuing battle which led Iron Man to use a negator pack without concern for the possible effect on his foe. The feedback from the fusing of his exo-skeleton nearly killed Sandhurst. As a consequence, he now depended on a room full of machinery for life support.

Establishing a new base, the Controller proceeded to develop a variant of his control disks that was undetectable. The new disks allowed him to leave his shattered body to share the sensations of the bodies that he mentally controlled. He also developed hormonally-modified cyborgs to serve as combat drones.

Once his infrastructure was in place he kidnapped the also-paraplegic Tony Stark to enslave him. But was foiled when Stark’s mentally-controlled Iron Man robot distracted the Controller. That gave Stark time to completely free his mind from the Controller’s hold.

Out of pity and a sympathy born of enduring a similar ordeal Stark chose to let the Controller remain free.

Sandhurst soon resumed plotting to enslave his fellow man and avenge himself on Tony Stark. This time he used his equipment to control a telepath and usee her powers himself. This allowed him to personally inhabit the bodies of dozens of people all across the continent.

He lured Iron Man to his lair and assailed him psychically. But when Stark fought back that allowed the telepath, who had been driven insane by her experiences, to break free. She attacked them both, forcing them to experience each other’s life.

Despite this assault, Iron Man was able to destroy the Controller’s equipment with a repulsor blast. The Controller suffered a cerebral haemorrhage. Although fully conscious of his surroundings was left completely unable to control his own body.

The Controller was rescued from his infirmity the Master of the World. He restored Sandhurst to his pre-Stark wars status quo so that he could serve as a pawn. The Heroes for Hire team uncovered the Master’s plan and he abandoned the Controller – since his usefulness had come to an end.

Most recently, he set up a West Coast self-help clinic. Although he would mentally cure his victims, he would also use his influence to extort money for himself and strength for his armor. Tony Stark tried to avail himself of the clinic and ended up in conflict with the Controller.

Iron Man was able to sabotage most of the Controller’s armor’s functions. Despite the fact that his slave discs remained operational, the Controller could no longer draw energy or powers through them. It is unknown how long it will take him to repair his equipment.

The Controller secretly build armies of enslaved people, since such schemes take time and resources if they are to remain undiscovered. However, once he has hundreds of persons under his command, he tends to grow impatient and finally explode in a devious plan for power, striking unexpectedly and with great force.

Of course, that’s the theory. Most of the time, Tony Stark just stumbled on his plots a bit too early.

“Within weeks I shall be what I have always been— The Controller, destined master of mankind !”

“Faster, my mindless minions ! Eight million fellow slaves are waiting to add to the might of the Controller !”

“Your flea-like annoyance deserves a flea-like fate… to be flicked away !”

“Your petty lives mean nothing to me, and less than nothing !”

The discs look like the things on the Dominators, but Sandhurst uses classic tech, not biotech like the Dominators… Okay, Sandhurst would be a old Green Lantern foe (he certainly feels like one), and his technology would have been improved after he worked with a Controller (the renegade Guardians), hence the name.

Basil and Vincent could have been employees of Ferris Aircraft thus leading to numerous clashes between the Controller and Hal Jordan.

How to make cerebral energy and influence people

The Controller draws on the cerebral energies of people wearing slave discs ; the more slaves, the more powerful he gets.

Of course, in both cases, that means he has to build 500 slave discs, find 500 persons to wear them, and have them within range.

The Power Reserve must be equally divided between BODY, Omni-Power and STR – in that order. The Controller most often uses Omni-Power to mimic a simple Mental Blast, although he’s been known to emulate Flight, Telepathy and Telekinesis.

For a brief time the Controller’s physical form was so damaged that he required bulky machinery to survive and was completely immobile even using his Absorbatron. Instead of his usual control discs he used microscopic implants which gave him Personality Transfer: 10 and Split: 20 in addition to his normal powers. Those two Powers had the following bonuses and limitations.

By Sébastien Andrivet and Jay Myers. 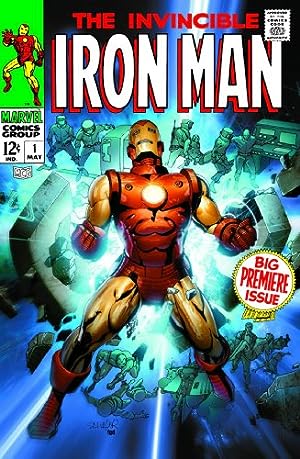 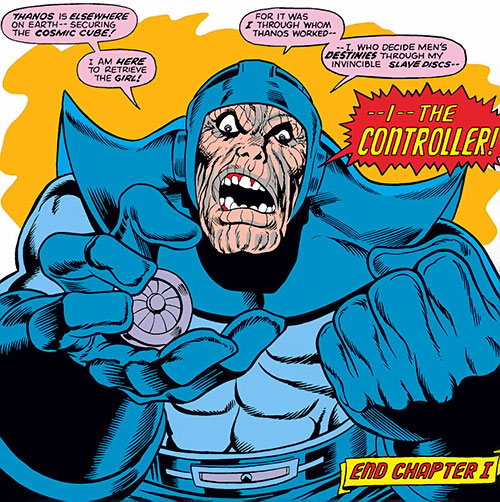