The Cooler has classic Ice Production powers. She even does the Iceman-like ice platforms/ramps to move around.

Her cold seems to be a rough match for Fahrenheit’s flame. They can counter each other’s blasts with neither making headway against the other. The Cooler has proven able to encase a large four-story building in a thick layer of ice.

The Cooler fought StormWatch several times in the past. She has a feud with StormWatch’s Fahrenheit.

She was one of the villains invited to discuss an alliance with major post-human criminals Slaughterhouse Smith, the daemonite Lord Defile and the Walking Ghost.

This discussion accidentally became on of the worst massacres in the history of New York City. It left hundreds dead after two hapless cops stumbled on it, resulting in a brutal escalation of violence. As StormWatch operatives teleported in, the Cooler engaged Fahrenheit once again.

Despite being 20 stories up, the Cooler maniacally jumped from her ice ramp to wrestle with Fahrenheit. The two women crashed in the street below, with Fahrenheit taking the worse of the impact.

Dazed and bleeding, the Cooler was apprehended by Officer Doran. She resisted arrest, but the quick-thinking officer duped her into electrocuting herself while trying to kill him.

The Cooler was seen some time later as one of the new allies of Lord Defile. Defile was attempting to take down the experimental PHD unit of StormWatch, then housed by the NYPD at the 18th precinct house.

The force of aliens and supervillains, supported by some daemonite troops, invaded the precinct house. They trapped and defeated everyone within. But they underestimated the prowess of both the cops (led by Doran) and the PHD operatives, and the tables were unexpectedly turned on them.

The Cooler tried to kill a weakened Fahrenheit. But the heroine easily took her out using her recently-learned, more ruthless combat techniques. The Cooler likely was arrested.

Fahrenheit described her as a psychopath. While she was obviously exaggerating this may not have been too far off. The Cooler does have a psychopathic vibe. And she was obsessed with Fahrenheit, a woman with fire powers, being her “natural” enemy.

Her hatred of her main opponent likely would apply to other fire/heat manipulators, especially women. But not to more exotic energy forms such as Hellstrike’s plasma.

The Cooler attacks wildly and savagely. Despite her solid ranged firepower has no inhibitions against melee combat. The Cooler will form big balls of ice around her hands to maul people with.

“Bring it on, tramp. Your flames don’t bother me. You want to make it fire versus ice again, I’ll play that game any day.”

Altered Anatomy and the MPI are not clearly demonstrated in the source material. They just seem likely. 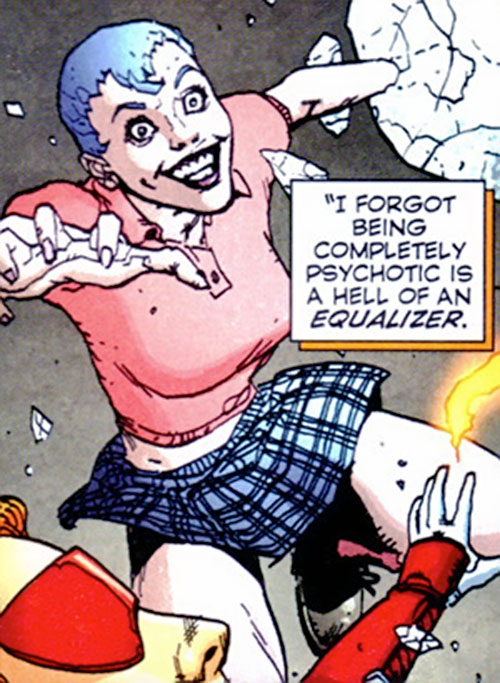