This far-over-the-top action hero/geek power fantasy parody was created just for fun. I hope you at least get a grin out of this guy.

He is the coolest cat walking today. Practically everything that ever made a geek fanboy wish he could have or be like someone else, this guy is it.

He is in the greatest shape of his life, he has the body of perfectly chiseled bronzed body-builder. He has become a General in his military career with the fastest promotion record in the books, joining when he was 16 with a waver and retiring at 36.

He gained the Congressional Medal of honor for his actions in the first Iraq war. When he single-handedly led a group of four soldiers against Hussein’s toughest tank brigade and personal bodyguard. The four soldiers died but he was able to defeat Hussein’s men and send Hussein into hiding.

He split the ranks of the enemy going beyond the call of duty. Because of his courageous efforts, He has been given a very special privilege. He is given full access and council with the President for life.

He is an amazing athlete and trained in the art of ninjutsu. He is also an expert, experienced weapons man, top rifle score for the Army for six years running. He can also drive anything that has been made by man.

He is a superior linguist, and an outstanding scholar too. Though he has very little schooling.

He is so popular and so well liked by the media politicians and everyday people he just runs across that he has been given some amazing gifts in his time. Like a lifetime pass to party at the Playboy mansion. He is a permanent judge for the Miss America pageant too.

He also owns many gadgets that were gifted to him, some by aliens. The Vulcans in particular gave him a Phaser pistol and taught him the Vulcan Nerve Pinch and how to fight in zero gravity.

He also traveled with them and once jumped through a wormhole where he met the Jedi order and became one of them. He supposedly built his own lightsaber (at least that’s his story and he’s sticking to it.)

The BFG was an experimental prototype, one of a kind. He had it issued to him for life by the military, he can get more ammo from the military too. He also still retains all his credentials with the military and can get military equipment at the drop of a hat as well as even call in an air strike on U.S. soil (hows that for impressive!)

Also early in his military career he was taken into the Weapon X project and given the Super-soldier serum. His bones were laced with the unbreakable metal, Adamantium  and his speed, endurance, and strength increased dramatically. He also has the Adamantium Wolvie claws to go with it.

He was the first in the weapon X project. They thought he had died and buried him with a heroes funeral, but he regenerated and clawed his way back up out of his own grave. Because he is so cool and friends with the company that made his policy, he got to keep his own death benefits. He has since wisely invested them and is doing well financially too.

Once when a Predator ship came to earth for hunting. He beat three of them in hand to hand combat. They have so much respect for him now and have given him a rare honor. He is considered one of their own and was given the predator armor and shoulder blaster. He has set these up in a trophy case in his office.

If he does come across something he hasn’t already experienced, he will use his Omni-scholar and become the local expert in mere minutes. Ha!

Of course he’s not too shallow, he has a tragic past too. His parents were murdered in front of his eyes and he was just a skinny kid, even in his teenage years. That all changed with the Supersoldier Serum and the start of his military career.

Tall, dark, and handsome. He has the body of a Greek athlete and a perfect tan. He has an air about him that makes anything he wears look good.

He’s never had a cavity or a blemish on his skin. No scars either, even though he has been in countless fights.

“The rumors of my death are true. Yet, here I am.”

“Work ! You piece of @#%&, work !” (Pounding on the instrument panel of his plane as it is spiralling out of control.)

A fan shouts as he passes by: “You’re awesome !!”
Coolest guy ever: “Thanks.”

“To fix this, I’ll need a bigger hammer.”

“Get up and walk it off, sunshine. We’re burnin’ daylight.”

If he is used as an NPC, I wouldn’t show off all his abilities and items at once, I’d string it out along the campaign. I’d let him just seem like the guy who always has whatever the group needs at the time. I’d even set up specific things to happen to let him shine, perhaps a meeting with Vulcans or even the Jedi order from Star Wars.

He would probably make for a good connection for the team too.

Connections:
The President of the United States, the office not the man so he has a High connection to whomever is in office (High), U.S. Military (High), Playboy mansion (High), Miss USA pageant (High), Predators (High), Vulcans (High), Jedi Order (High), Street (Low).

Equipment:
The coolest guy ever may have just about any weapon you can think of, even illegal or black market items. He will normally carry some type of sidearm (bought with his Wealth), and a knife (usually in his boot.).

Using Martial Arts for AV and a Critical Blow, he may score -4 CS to the RV instead of the usual -3 CS RV. The No Vital Areas Advantage is still useful against a character with this Shtick.

He can enhance the EV of his grenades with HPs, up to double the EV even if Genre rules say otherwise. Of course, GM always has final say. 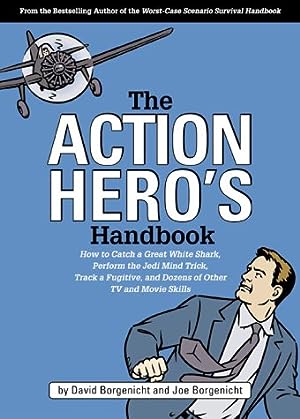 The Action Hero’s Handbook: How to Catch a Great White Shark, Perform the Vulcan Nerve Pinch, Track a Fugitive, and Dozens of Other TV and Movie Skills