Lawfers does not seem to have any exceptional training. On the other hand, he’s an able combatant and is not half-bad with his weapons.

He wears a suit of seemingly non-powered, full body armour. Presumably it can stop small arms fire to an extend. But did not offer full protection against a well-placed stun disk from Nomad or Captain America’s punches.

The gauntlets shoot energy bolts (“venom blasts”) from the fingers. These seem electrical in nature and do a “TZAK !” noise. And he once shot spikes from his gauntlets’s fingers.

Copperhead is not big on ammunition discipline. Ae often fires bursts where each finger save the thumb shoots an energy beam, particularly against moving opponents.

Secondary sources  indicate that Lawfers is from Rochester, in the New York state. He obtained a business administration degree and became a civil servant. Eventually, he became a criminal and was contacted by the Viper to spearhead one of her schemes. He received a unique suit of body armour from her technicians.

Though there was a loose similarity in look, this identity does not appear to have connections with Copperhead (Lawrence Chesney). Or the fictional pulp character, for that matter.

The newly-masked Copperhead then led a strike force of other snake-themed criminals in Viper’s employ. With Black Racer, Fer-de-Lance and Puff Adder, he conducted a series of violent and spectacular heists against casinos. One such heist went ugly – the criminals killed much of the security team, but found the building surrounded by the local police.

They back-pedalled with the loot and the hostages to the casino’s top floor to hold off the police. Captain America (then known as the Captain) and his allies D-Man, the Falcon and Nomad intervened. Copperhead and his crew were defeated. 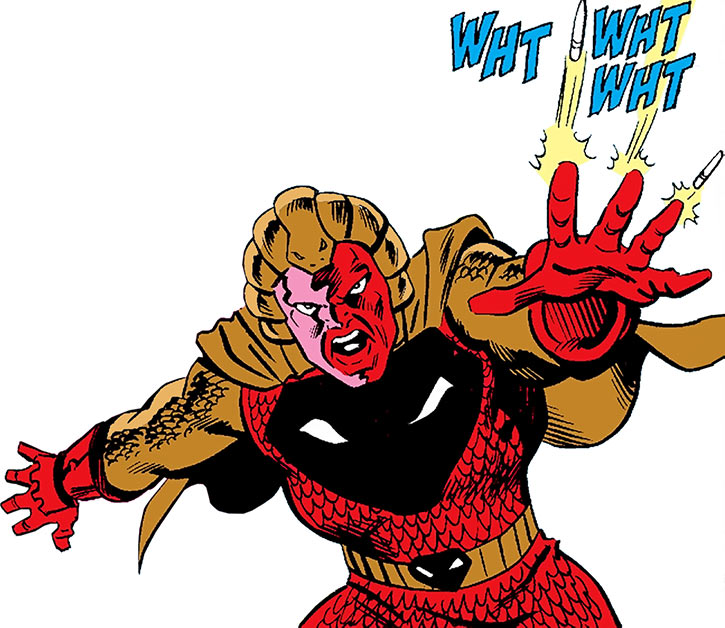 That was actually the plan. The Viper wanted them to attract the attention of Sidewinder so he would offer them membership within the Serpent Society. Despite the opposition of the Captain and his team, Sidewinder did teleport into the local jail and managed to get Copperhead and his team out. They of course accepted his offer, and joined the Society.

The very evening of their first day as probationary members, the double agents teleported Viper in and gave the signal to several turncoats. Sidewinder only survived this assault from the inside thanks to his loyalists, and in particular Diamondback (Rachel Leighton).

Meanwhile, Copperhead was sent with pro-Viper agents Cobra and Boomslang to dump a special toxin in the water supply of Washington, D.C.. The plan worked, and the mutagenic toxin started turning Washingtonians into rampaging snake people. It even affected US Presidential couple Nancy and Ronald Reagan.

As Copperhead and his two men tried to get out of Washington via the sewers, they got lost. They had to finish their journey walking in the streets and repulsing snake men attacks. This gave enough time for Captain America and his new ally Diamondback to find and defeat Copperhead and his team.

However, the Cobra (allegedly working undercover for Sidewinder) and the Viper escaped. The Viper was recaptured and the situation in the DC became normal again after this major terror action.

Copperhead remained with the Serpent Society after Sidewinder’s departure and the Cobra taking over. This likely was on a probationary basis. Thus, he was there when the Society accepted a major contract for Ghaur and Llyra, to recover a series of ancient artefacts.

One team of probationary Serpents (Copperhead, Diamondback and Fer-de-Lance) was sent to recover an artefact held by the sorcerer Mister Jip. Jip was far more powerful than they were, and immediately zapped them unconscious and teleported them away.

At this point Copperhead left or was rejected by the Society. He was not seen again for years. It is possible that he had an undocumented criminal career, or he may have resumed a civilian life.

Copperhead (assumed to still be Lawfers under the mask) reappeared quite recently (early 2009) in the wake of he Skrull invasion. A number of current and former Serpent Society members had banded together and seemed somewhat shellshocked. Perhaps they had had harrowing experiences caused by the Skrulls during the war.

Led by Copperhead, the beleaguered Serpents (Sidewinder II, Anaconda, Black Mamba, Fer-de-Lance, Death Adder II) took a farming community in Ohio hostage. Apparently, they intended to live off the land as warlords. They had become paranoid and were expecting random people to turn out to be Skrulls at any moment.

While the FBI’s Hostage Rescue Team was trying to find a way to defuse the situation, Richard Rider (aka Nova) and his new Nova Corp flew in at hypersonic speed. They neutralised all Serpents before they could react, with Nova punching out Copperhead.

Copperhead seems level-headed, businesslike and well-organised. He is reasonably competent, but not cinematically  so. He appeared to be well-educated, articulate and particularly at ease when the operations resembled a negotiation.

Copperhead is also a fair leader, though he dislikes it when his decisions draw criticism. He seems not to like getting his hands dirty, though he will happily use ranged attacks as an active combatant.

During the raids on the casinos, his plans and contingency plans were solid. He used the skill and powers of each of his accomplices to their fullest, and gave numerous and precise orders.

“A reinforced door up ahead. Fer-de-Lance, see if the key you acquired fits the lock. Black Racer, disable the closed circuit cameras.”

“I assure you we mean business.”

“Boomslang, will you inform the cretinous Cobra that his constant grousing about my leadership is wearing as thin as the hair on his head ?”

Copperhead III is a bit of a special case since a good proportion of what is known about him comes from secondary source. On the other hand this material probably comes from the character’s creator, so… Still, I prefer to keep the significant abilities he never demonstrated in actual stories in a separate section. In Copperhead III’s case, this means the following weapon systems: 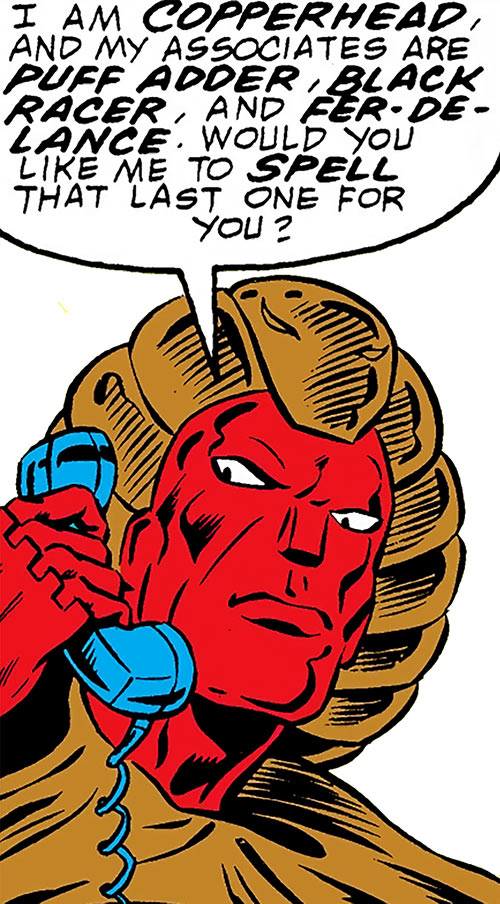 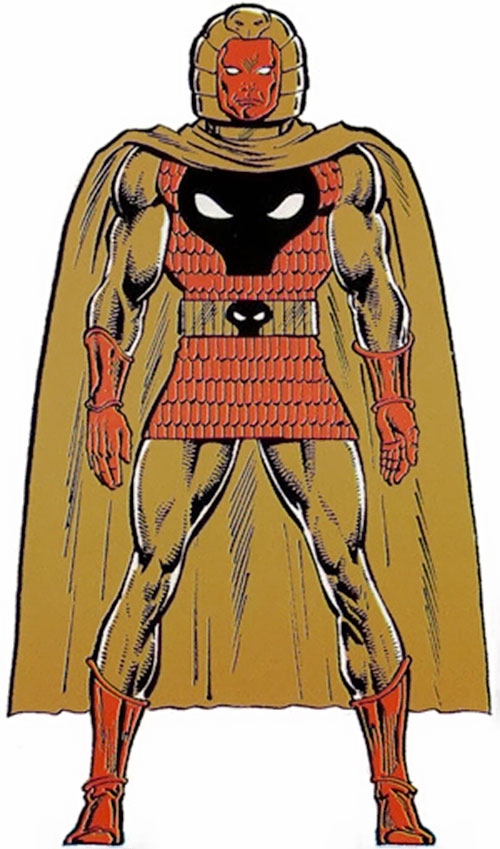 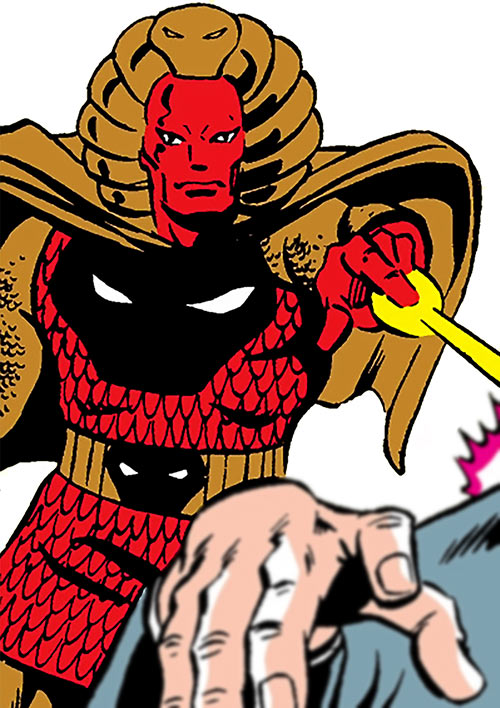