Cordelia is the Matriarch of the South Eastern branch of the Coda. As such, she has the intensive military/assassin training of her sisterhood, plus a lot of political training and contacts.

Cordelia is a combat monster of sufficient ability to engage superhumans and multiple armed opponents. She is a major player on the Asian underworld and mercenary scenes.

Cordelia was the one whom Alex Fairchild contacted when IO started to get interest in the Team 7’s children. As a favor she owed to the Chang Triad of Hong-Kong (the same Chang Clan as Philip Chang, Grunge’s father), she agreed to take care of the children. She landed on the USA by boat, covertly, and met with the kids.

After several years, explaining she could no longer guarantee their safety, she brought back everybody to the USA. Before the plane could land, they were attacked by awaiting Black Razors, led by Dane.

Titiana, one of Cordelia’s lieutenants, had betrayed her to Craven, warning him of the return of her Matriarch. This signalled a high probability of Team 7’s kids being present. The crash was dampened by the combined powers of Chang and Fairchild.

Cordelia and her guard of Coda warriors engaged the Black Razors’ squadron. Titiana revealed her treachery by killing one of her former teammate, turning the battle in favor of IO forces.

The arrival of Deathblow and his girlfriend Gaby, however, made the Coda forces victorious. Cordelia could barely be prevented from killing Dane, but Chang then broke Dane’s conditioning.

Later, when the former Team 7 infiltrated the IO facility named The Farm – in upstate New York. Their goal was to get Lynch’s boy (Burnout) and prevent further IO experimentation on him. But the operation went wrong and they got surrounded by a squadron of Black Razors, reinforced with other Gen-actives, still loyal to Craven.

The day was saved by Cordelia’s warriors. Alex Fairchild had called for her help, in exchange of he serving a term with her forces.

Fairchild, however, didn’t fulfill his part of the deal. Instead, he ran away when he heard about his daughter Caitlin looking for him.

The angered Cordelia sent bounty hunters after him. They found him in the ruins of a safehouse in La Jolla. As he believed his daughter was dead in the house’s explosion, and nothing mattered to him anymore, Alex Fairchild accepted to serve Cordelia again – with little regard as to his own safety.

Yet he ran away from her, again, as soon as he learn that Caitlin was still alive. Cordelia sent her bounty hunters back on his trail and they found him again – the Gen 13 not being exactly low profile. This time, she went in the field personally, and tried to take Roxanne and Sarah as hostages.

They were in the middle of a stand off, when IO dropped and crashed the party. The shock of the assault allowed them to take down Coda forces on the site. Cordelia escaped but was never seen again – presumably because Alex Fairchild died in that battle.

As all Coda’s members, Cordelia his a very attractive woman. She looks far more charismatic than the others, and has a much better control of her Coda temper.

Again, as any Coda, she manages her business with ruthless efficiency. When she owes favors, she pays them back. When someone owes her, she expects no less. That’s better for business reputation.

Though she’s a cold blooded killer when the need be, she’s not as blind as her fellow Coda to the value of people. When someone may bring her some added value, she can give him a second chance to prove his usefulness.

Cordelia would presumably be a renegade Amazon, having left Paradise Island for the Man’s World centuries ago. Consequently adjust her physical abilities upward. 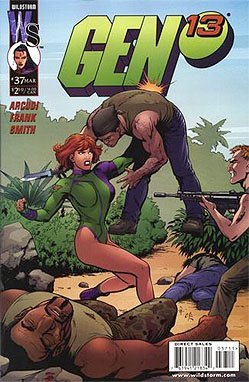