He remains an obscure character.  But he made minor returns during the 2010s due to vintage Cage nostalgia.

Cornell Cottonmouth (who often goes by just “Cottonmouth”) shouldn’t be mistaken for the vaguely similar Cottonmouth from the Serpent Society. Let’s keep our snakes straight, eh ?

Each Cottonmouth appearance has featured different abilities, characterisation and atmosphere. So for clarity this article comes in two parts :

In 1974, Cornell Cottonmouth is a major mobster on the East Coast. He’s feared, charismatic, well-connected and wealthy.

Mr. Cottonmouth has superhuman strength. He’s roughly on par with then-contemporary Luke Cage, so about “Class 5”.

He’s also a redoubtable brawler, though not quite on Mr. Cage’s elite level.

His durability is borderline superhuman. So he can take some super-strength blows, but he’s not immune to bullets and the like.

The source of his super-strength remains unrevealed. It was gone by his 2010s return.

So perhaps his strength was derived from enchanted jewellery. 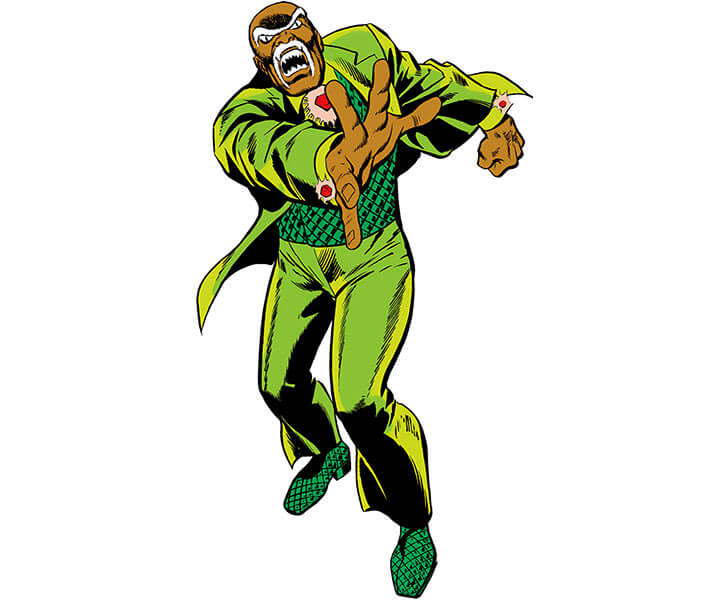 In his youth, Cornell was part of a small-roster, small-time Harlem street gang.

The other members were :

Inspired by contemporary super-villains, the gang sought a unifying, intimidating gimmick. They came up with the idea of having their teeth filed into fangs. Cornell, Lonnie, Raymond and Mortimer all underwent this operation.

However, the group split over personal differences. The projected Fang Gang thus never came to exist.

(Note that this flashback is seen from Dontrell Hamilton’s point of view. So there’s likely some bias.)

The flashback takes place in a sliding time  . Therefore, the chronological details have to be hazy.

If you’re working by publication time, the gang likely split circa 1960. Their inspiration for the “fangs” gimmick may thus have been Atlantean warrior Mako, a super-criminal who also worked with the heroic First Line.

(The dialogue also references the Kingpin (Wilson Fisk). But if you use the circa-1960 timeline, just substitute his predecessor, Alexander Bont.)

All the members of this small crew achieved some pre-eminence among the 1970s New York City underworld. One can thus imagine they remained in contact – no longer friends but still willing to trade favours.

Access to Mr. Lincoln’s mob contacts may have been what allowed them to each carve their own niche.

Shouldn’t be hard to find something suitable from 1974…

Let’s go with the Four Tops’ “One chain don’t make no prison”. Because a/ it strongly evokes that era and b/ the lyrics are awful. They suit the villainous Cottonmouth.

By 1974, Cornell “Cottonmouth” was a major figure in the American heroin trade. His headquarters encompassed most of a floor in a midtown Manhattan office building.

His horse trade was described as the largest in the nation. This may have been briefly true. Back then, humble spices merchant Wilson Fisk wasn’t involved in narcotics. And the Pride’s very existence was a secret.

Mr. Cottonmouth’s rise to power may have been based on his then-superhuman strength.

(Stryker and Lucas were half a crew called the Harlem Rivals. The other half was Shades and Comanche. Perhaps the Rivals’ interest in having distinctive gimmicks was inspired by the stillborn Fang Gang.)

For years, Cottonmouth’s enforcers investigated the missing heroin. He couldn’t afford to let such a theft go unpunished. But they never solved that case.

In 1972, Carl Lucas escaped and became a “hero for hire”, using the name “Luke Cage”. He also continued to investigate how he had been framed. 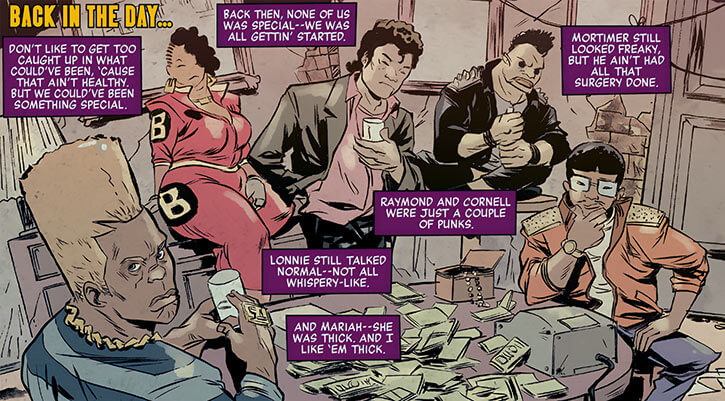 The stillborn Fang Gang. The fashions refer to a specific era, but in a sliding time line we can’t interpret that literally.

However, Flea’s inquiries were detected by Cottonmouth’s enforcers. They murdered the stoolie, assuming he had been part of the theft years before.

Two of his toughest enforcers, Mike and Ike (no relation  ), then came in to check whether Cage was still alive. The hero for hire killed the snakes, beat up the thugs and had them tell him where to find Cottonmouth.

However, when Cage came in Cottonmouth unexpectedly offered him a job.

Cage agreed. But his actual goal was to find records proving that he had never been involved in the heroin trade.

Cottonmouth tested Cage by sending him to steal from “Boss” Morgan. Though Morgan’s men were armed and ready (one even had a bazooka), Cage prevailed.

Cottonmouth and his right-hand man Slick later found Cage rummaging through Cottonmouth’s desk for old records. Cottonmouth fought Cage toe-to-toe. But Slick was accidentally defenestratedThrown through a window. and killed.

Shocked by this death, Cottonmouth told Cage there were no records. All the data has been held in Slick’s perfect memory.

He wasn’t seen in decades, and likely spent 30+ years in prison.

This history is continued in the 2010s character profile for Cornell Cottonmouth ! 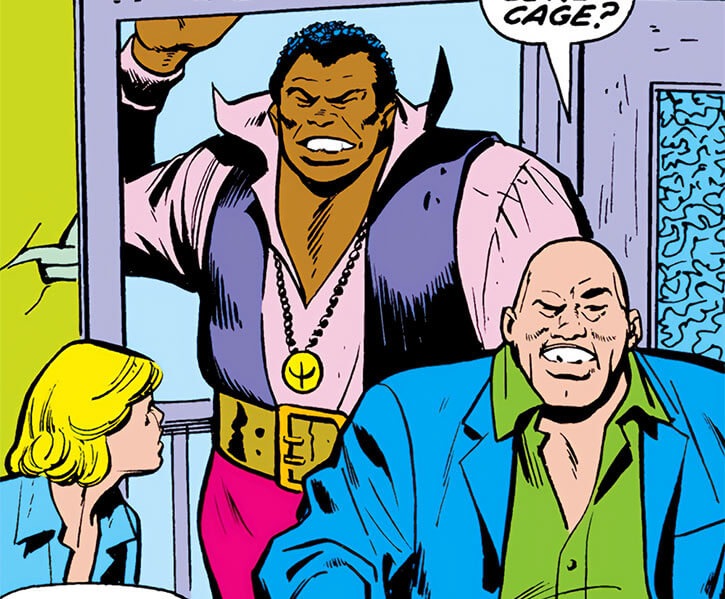 As you may notice, Mike and Ike don’t look alike.

In the alternate future of Spider-Girl (May Parker), Cornell Cottonmouth has made his… no, don’t call it a comeback. He’s been there for years.

His mob controlled much of the Bronx. The likes of Man-Mountain Marko or Fancy Dan had also become New York City mob bosses.

The MC2 continuity (Spider-Girl’s time) diverges from Earth-616The main Marvel Comics version of Earth. circa 1997. Thus, in the MC2 continuity it is probable that Cottonmouth’s 2010s appearances on Earth-616 never took place.

He also still likely had his enhanced strength. As you can see on the picture he wears similar jewels (but green), and his eyes are clearly altered.

Cornell Cottonmouth sports a thick, white unibrow and a matching moustache. His teeth have been filed into fang-like points, for intimidation.

During the 1970s his canines are abnormally elongated, and he has snake-like vertical pupils. These characteristics seemed related to his super-strength.

He wears snakeskin boots, of course. Wouldn’t you ? 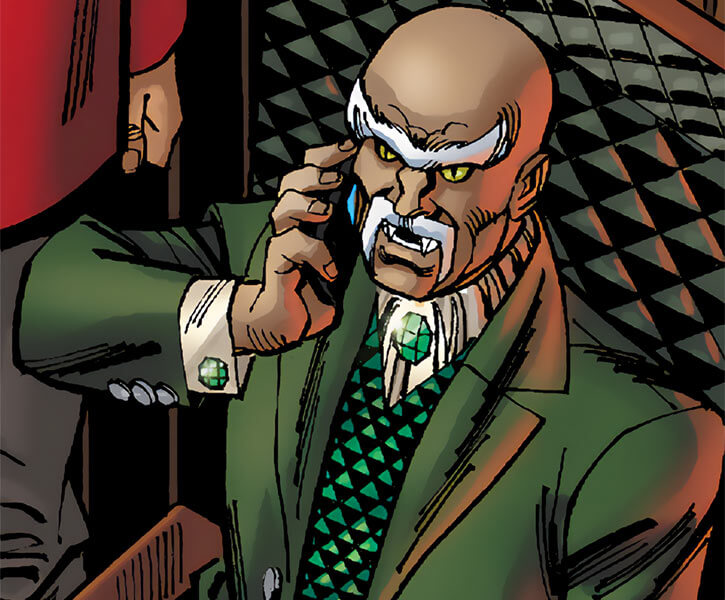 Cornell Cottonmouth was a surprisingly civil and accommodating crime lord. Presumably his immense strength and scary appearance meant that he didn’t have to make shows of power.

He was interested in projecting an image of wealth and class, like his former friend Piranha Jones. But this felt more like overcompensation than in Jones’ case.

He seemed to make his decisions from the gut. Cottonmouth put too much trust in people he intuitively liked. He did not analyse things thoroughly. He’s a System 1  guy.

Presumably, luck and competent lieutenants played an important role in his ascension. One imagines that he would have fallen soon even without Cage.

After Slick died, Cottonmouth seemed to consider that it was now impossible for him to run his heroin trade. He also lost the will to fight.

“Mister Cage, I suggest you restrain yourself for one moment — before you do something you’ll certainly be sorry for !”

“This is why I sent you the [venomous] snakes… as a test of sorts. Had you failed it, I assure you I’d be remorseful — but you passed it as expected, and with splendid colours, I might add. Here, Mister Cage — the wine is from my private stock.”

“Spare me the homilies about the poor unfortunate junkies I’ve doomed. They’re ants and they get stepped on. The strong survive. Men like me survive. Few modern-day knights survive. Precious few. Because when you stand with ants… you share their fate !”

The straightforward conversion would be to have Cornell Cottonmouth as a foe of Black Lightning. He’d be one of Tobias Whale’s lieutenants among The 100. 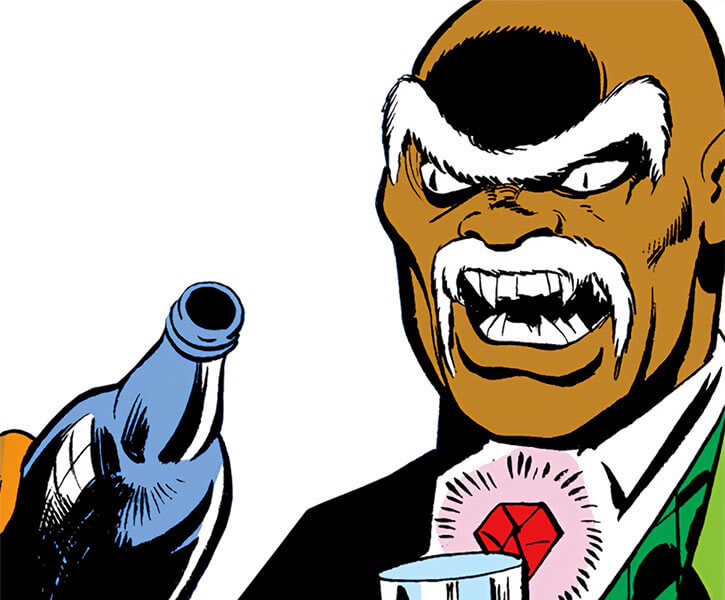 Mike and Ike — who do not look alike — were apparently Cottonmouth’s primary enforcers during the 1970s. Likely stats for these two exceptional muscle types are :

They were unarmed when they confronted Cage. But they presumably packed heat (say, a Colt Diamondback for Ike and a M3 submachinegun for Mike) the rest of the time.