This is the second half of our Cornell Cottonmouth character profile.

In 2010, Cottonmouth seems to have lost his superhuman brawn.

He’s still a tough guy and a good fighter, but nothing splendtacular.

He returned to his early “Fang Gang” gimmick. Now his filed teeth are reinforced with sharp, stainless steel. His bite can easily kill or maim a man, and he’ll do so with no hesitation.

But if he expects serious combat, he’ll use firearms. 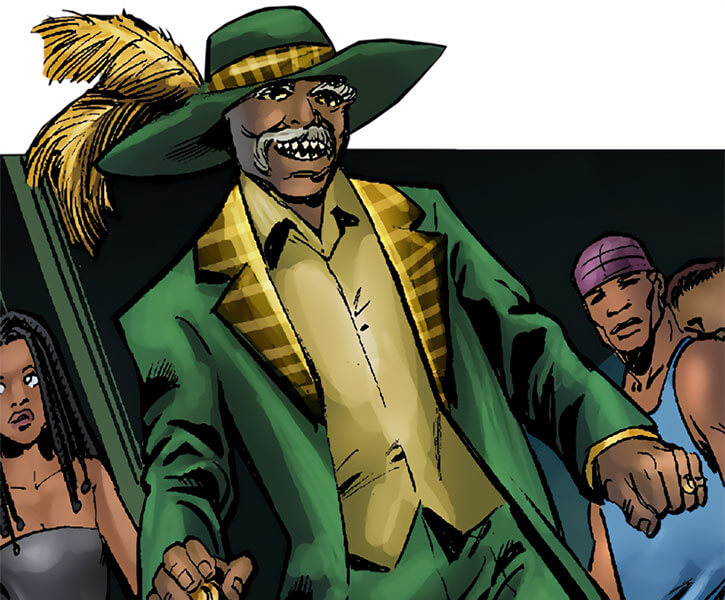 When he was seen again, Cottonmouth’s heydays were long past. Even the reign of “Boss” Morgan had been over for decades.

He pivoted to pimping, developing a flamboyant blast-from-the-past image as a Dolemite  type.

The rising power in the Harlem underworld was young Nightshade (Tilda Johnson), who had returned to her old neighbourhood. She enjoyed working with Harlem’s older enforcers. Cottonmouth in particular became her lieutenant.

In 2010, the Hand ninja cult took over a large swathe of Manhattan.

Cottonmouth’s primary stomping ground became Purgatory. That was the area under the West Side highway, so named because it was outside of Daredevil (Matt Murdock)’s turf.

However, young hero Power Man (Victor Alvarez) was hired to rescue one of Cottonmouth’s underage prostitutes. The pimp was easily defeated. He also had to have his steel teeth redone.

Coincidentally, Hand ninja then came to claim dominion over Purgatory. They lethally forced the criminals out.

Cottonmouth later accompanied Nightshade as she confronted Power Man. The pimp was about to finish off the defeated hero, but Nightshade changed her mind at the last second. She now wanted to hire Mr. Alvarez.

Iron Fist (Daniel Rand-K’ai) then came in. Power Man sucker-punched Cottonmouth to ally with the Fist.

Cornell Cottonmouth was apparently in and out of prison for years. He occasionally appears in crowd scenes, usually with his 1970s getup.

His longest prison stay apparently occurred after Tombstone (Lonnie Lincoln) ratted him out. Tombstone then swept in and consolidated his power, becoming Harlem’s newest crime lord.

In late 2016, Cottonmouth escaped from prison. This was during the tail end of Civil War II  , while superheroes were too busy fighting each other.

But by that point, Cottonmouth had little left – no crew, no assets.

Cottonmouth reunited with the Fang Gang member he had remained the closest to – Piranha Jones. But Jones wanted to ally with Black Cat (Felicia Hardy) to steal from Tombstone.

Cottonmouth thought that was a fool plan. He bailed out, after warning Piranha that his plot would end badly.

Something suitable that loudly says 2010…. mmm, let’s go with Ludacris.

He was setting up a new Pride organisation in NYC.

Cornell Cottonmouth then joined as well. As did Carlos Cabrera (formerly Gamecock) and Scimitar.

As a sign-in bonus, Wilder erased the criminal history of his New Pride associates. Though Cottonmouth remained wary, he and Scimitar agreed to lead a kill team into Tombstone’s headquarters.

However, that was a trap.

Tombstone ensured that this assault took place while Piranha Jones (and his mercenary lieutenant Montenegro) attempted their theft, *and* while Luke Cage and Iron Fist came in. Tombstone then triggered a huge charge of explosives to kill everyone.

Cottonmouth only survived as Alex Wilder teleported in and out of the blast to snatch his ally. Piranha Jones was killed.

Cottonmouth dropped out of the New Pride to bury his old friend Piranha.

During the funerals, Luke Cage came to pay his respects. He also encouraged Cornell Cottonmouth to skip town. The conflict between Alex Wilder and Tombstone was about to get much worse.

Though this initially angered Cottonmouth, he soon realised that Cage meant well. He apparently followed his advice.

In 2010/11, Cottonmouth ran with an over-the-top, flamboyant 1970s pimp act. He was garbed in green and gold, complete with cane and lushly feathered hat.

He has green eyes – we assume that these are coloured lenses. Sometimes it looks like his eyeballs are green, with vertical snakelike black irises. This might instead mean he still has weird eyes after losing his powers, but this seems less likely.

By 2017, he looks older. As it happens, his apparent age is coherent with the hypothesis that Marvel characters age at a far slower rate when they have powers.

He dropped the pimp thing, simply dressing in slacks and an off-white shirt. It’s sort of business casual, but with some 1970s East Coast African-American throwbacks. Such as a slightly disco, more open shirt – and a pocket square in his vest.

His teeth are still filed but no longer steel-shod, and he now trims his eyebrows. His eyes look human. 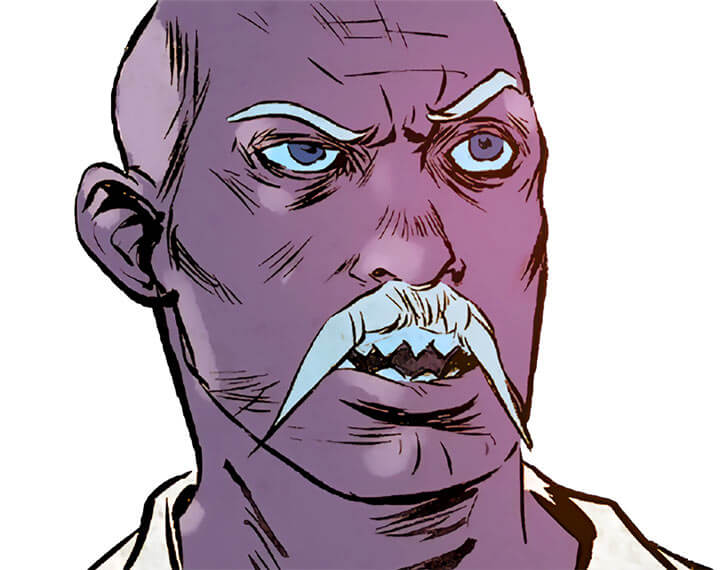 In 2010, Cottonmouth is sticking with his vintage pimp act. Presumably this is a #brand #image thing.

The “vintage” part might be a way to remind people that back in the 1970s he was feared – and that there were solid reasons for that. It might also be a way to seem retro cool rather than has-been.

This is a flamboyant persona, where he slings a lot of old jive and acts extra. He also emphasises the teeth thing, for (generally successful) intimidation.

However, his heart doesn’t seem entirely in it. Perhaps because he isn’t comfortable having to follow Nightshade’s orders.

By 2017, Cottonmouth has dropped this schtick. He’s an older, realistic, wary, somewhat bi(t)ter mobster. He sees himself as a honourable old-schooler, who speaks his mind and is true to his word.

He often refers to himself using the third person, or even as “Cornell”.

His dialogue comes across as more naturalistic and credible — but still old-fashioned — than in previous takes.

(In his green and yellow pimp suit) “From North to South they call me Cottonmouth, ’cause the scales tell the tale ! Green for the money and gold for the honey, ahehehehehehhe ! Oh yaaassss ! You have a fine eye for the finer things in life, playa !”

“Watch your mouth, boy !” (bites off a chunk of somebody’s arm) “Wait, no. Watch mine ! So much prettier ! Aheheheheheheh !”

“First off, let me say that Piranha is my boy — but he ain’t got much by way of brains or vision. And that’ll get you killed. Which leads to number two — Cornell ain’t escaped from prison just to get killed. Third, because I escaped, I’m on the run. Cornell ain’t got but so many places he can hide, and let’s be honest… hidin’ ain’t no way to be livin’. Might as well be back in the joint.” 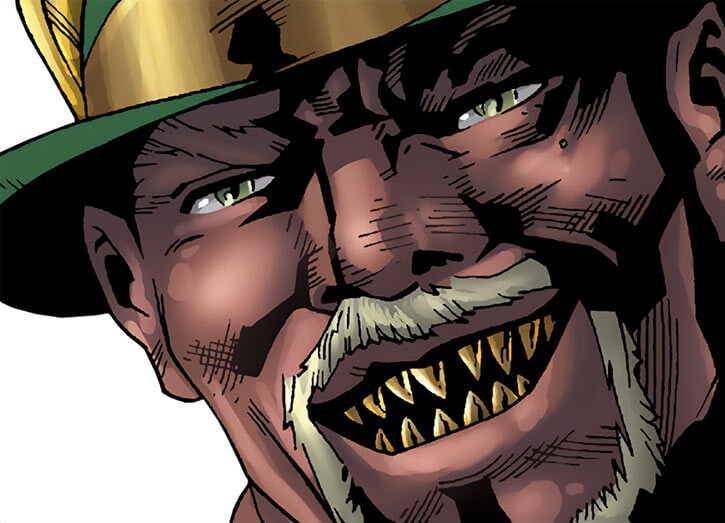